News & Politics / The young workers exploited by ‘fire and rehire’ 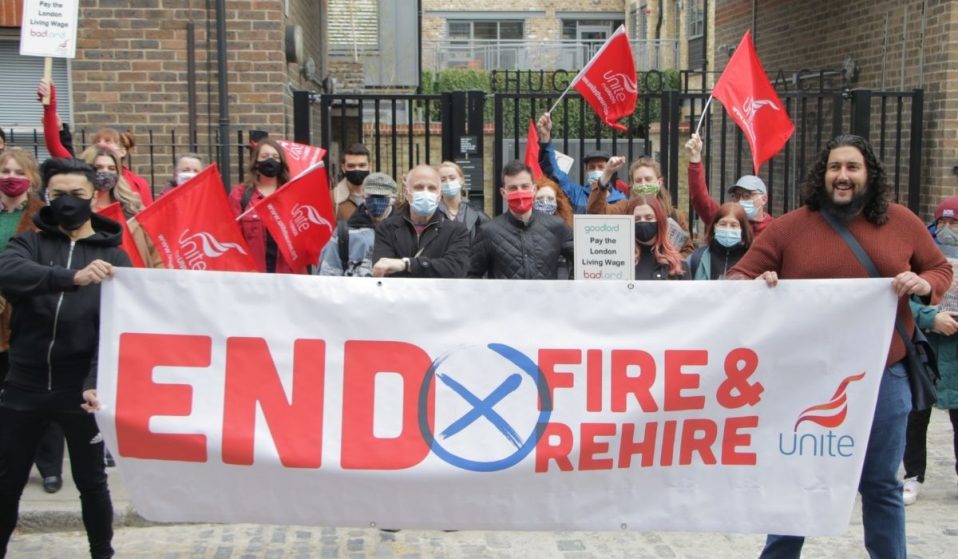 A practice which sees businesses dismissing staff only to rehire them on less favourable terms has been on the rise amid Covid.

An unscrupulous practice which sees businesses dismissing staff only to rehire them on less favourable terms has been on the rise amid the pandemic – and it’s young people who are bearing the brunt of it.

After the UK entered lockdown, Ivan*, in his 20s, who was working as a chef at a London restaurant, was told that he was going to be made redundant. He faced becoming unemployed overnight in the middle of a global pandemic – unless he accepted another role at the company that was three levels below his original position.

Faced with the choice between a lower income and no income, Ivan agreed. “I was on £40,000, then it dropped to £21,000,” he explains. “Department heads didn’t have to take a pay cut or lose their jobs, but I had to take it as I had no other options. I was worrying every month and knew Universal Credit wouldn’t help me because I had a job.” He struggled to pay his rent at the lower rate of pay, and ended up having to move out of his home and into a cheaper property.

Once known as ‘dismissal and re-engagement’ but now more commonly referred to as ‘fire and rehire’, the tactics Ivan’s employer used to cut costs have become widespread during the pandemic. Research published by the TUC in January 2021 found that nine per cent of workers had been told to re-apply for their jobs on new terms and conditions or face the sack, with almost a quarter reporting that their working terms, such as pay or hours, have been downgraded since the first lockdown in March 2020.

And young people are affected more than older generations, with 18 per cent of 18 to 24-year-olds saying that their employer has tried to rehire them on inferior terms during the pandemic. People under 35 accounted for almost 80 per cent of the jobs lost between April 2020 and April 2021, while 46 per cent of under 35s are dealing with the instability of rented accommodation. This, combined with the continued increase in living costs, puts young people in an even more precarious position than they were already, pre-pandemic.

Ridh, a waiter in his twenties living in Glasgow, knows this experience all too well. When Covid hit, he was first furloughed then laid off by the restaurant he worked at. Having worked there for less than two years, he was not entitled to a redundancy package but, after a few weeks, he was then re-hired. “The hours were significantly reduced when I went back, but I had to do more peoples’ work,” he explains. “There was a lack of communication, and I was stressed out about paying my share of the bills and rent, but nobody else was hiring because of Covid.”

Employers often retain the same expectations of their workers after letting them go and re-hiring them under new terms, but fail to adequately compensate them for doing the original amount of labour. Jane*, age 24, was working for a local newspaper in London when she was laid off in April 2020. She spent a month and a half without an income, only to be brought back as a freelancer in June. Under her new contract, her pay was just a fraction of what it had been previously – but her bosses still expected her to be as available as she had been when she was on staff.

“The problem with the new contract was that although it said ‘freelance’ on paper, they wanted me to practically be available for them on all days either for editorial meetings, interviews, attending virtual press conferences and sometimes even for updating their website and social media,” she explains. “They expected me to pretty much work full-time for them while they paid a freelance ‘consultation’ salary.” This unscrupulous practice of getting workers to register as self–employed, despite treating their workers as employees – just without any of the benefits (for example sick pay or holiday leave) – is known as ‘bogus self-employment’.

This behaviour is not limited to small companies who are struggling to survive the impact of Covid shutdowns – large companies have also been opportunistically cutting costs throughout the pandemic. In April 2021, hundreds of British Gas employees lost their jobs when they refused to sign contracts that would leave them doing more hours for less pay. In recent days, workers at the shoe manufacturer Clarks have also been on strike after being asked to agree to a reduction in hourly wages, cuts to sick pay, removal of paid breaks and a reduction in overtime rates. Meanwhile, striking engineers at Weetabix have also been given an ultimatum – either agree to a new contract that could see them lose up to £5,000 in earnings each year, or risk losing their job. Currently, negotiations at Clarks and Weetabix are both ongoing.

🪧 New banner on the picket line at @weetabix in Burton Latimer today – Termination and re-engagement = fire and rehire!
Our members won’t be fooled by management speak and will continue to fight these savage cuts to their T&Cs. #TakingTheBiscuit #FireAndRehire pic.twitter.com/yKTL6XcMXl

According to Jack Yates, communications officer at the union ACORN, these tactics not only affect workers financially, but also negatively impact their personal lives and emotional health. “Fire and rehire is a scourge on our workplaces,” he says. “Not only does this practice allow cash-grabbing bosses to slash people’s wages at a time when living costs are skyrocketing, but when it is used to force changes to working patterns it can uproot people’s entire lives, isolating them from friends and family.

“It goes without saying that this is incredibly distressing and can seriously damage the mental health of people affected by these practices,” he continues. Ivan, Jane and Ridh all described being under a great amount of stress during the fire and rehire process. “I felt stuck and there really wasn’t a lot of money coming in – it was rough on both my finances and my mental health,” says Ridh.

And although these practices are exploitative, they are usually not against the law. The 2012 amendment to the Employment Rights Act means that workers who have been in their position for less than two years can only claim unfair dismissal in limited cases – they can essentially be let go for any reason, and employers are free to then offer them an alternative job.

According to Andrew Park, a consultant in the employment team at Lawrence Stephens Solicitors, a worker who has been in their position for more than two years may be able to claim unfair dismissal. However, he warns that there might be limited benefits for an employee doing this under current employment law.

“The employee has an obligation to mitigate their loss – i.e. keep the loss as small as possible – and if they don’t take the new job they may be seen to be failing to mitigate,” Park explains to Huck. “In other words, they might prove unfair dismissal but fail to get any, or any substantial compensation.

“The other problem from the employee’s point of view is that the employer might convince a tribunal that the dismissal was fair, because it was reasonable to fire and rehire for business reasons and there was no other way of achieving the variation of the contract,” Park continues. “As always, it is a tricky area and each case depends on its merits.”

A poll by GMB Union found that more than three-quarters of the British public think that firing and re-hiring should be made illegal – perhaps surprisingly, this statistic included 71 per cent of Conservative voters. Additionally, 67 per cent of respondents said that they would be less likely to buy goods or services from a company that used fire and rehire – a message that bosses should perhaps consider before chasing profit at the expense of their staff.

In June 2021, the Labour MP for Brent North, Barry Gardiner, presented a Private Members Bill to parliament that would amend the law to “provide safeguards for workers against dismissal and re-engagement on inferior terms”. The Bill is scheduled to be debated on Friday 22 October, although Conservative party members are on a three-line whip, meaning that it is likely to be defeated.

So, until progress is made, workers must use collective action to bargain with bosses where possible. “Get organised with your colleagues and join the union in your workplace if there is one,” says Yates. “The most important thing is to tackle these threats collectively rather than individually; every person unorganised fights their battles alone, and a battle fought alone is a battle lost.”

After eleven years of Conservative governments, the UK’s withdrawl from the EU and a global pandemic, workers are in a particularly vulnerable position. Employers will continue attempting to squeeze their employees for as much profit as possible – and right now, the best hope of fighting exploitation of workers is to use power in numbers.

“Bosses, just like politicians, want to isolate you because they know that our class has power when we stand together – don’t let them do that,’ Yates remarks. “As the old union saying goes: ‘United we bargain, divided we beg’.”

*Name has been changed for anonymity

Linkedin
RELATED ARTICLES
OTHER ARTICLES
A new exhibition brings together photographer Greg Girard’s evocative shots of Hong Kong during the city’s golden age.
The attacks on queer Ghanians have culminated in proposals for a terrifying new bill which threatens to criminalise homosexuality.
This Trans Day of Remembrance, a shift in focus is needed to address the systemic causes of transphobia and violence that trans people face at home and abroad.
Discrimination and marginalisation of trans people is exacerbating the risks they face when it comes HIV/AIDS.
As nursing unions gear up to protest the three per cent pandemic pay rise, people who attended the UK’s first-ever national nurses’ strike reflect on its legacy.
A new book brings together photos by Tom Wood taken over a period of over nearly 50 years, centring the photographer’s often-fraught lifelong relationship with Ireland.