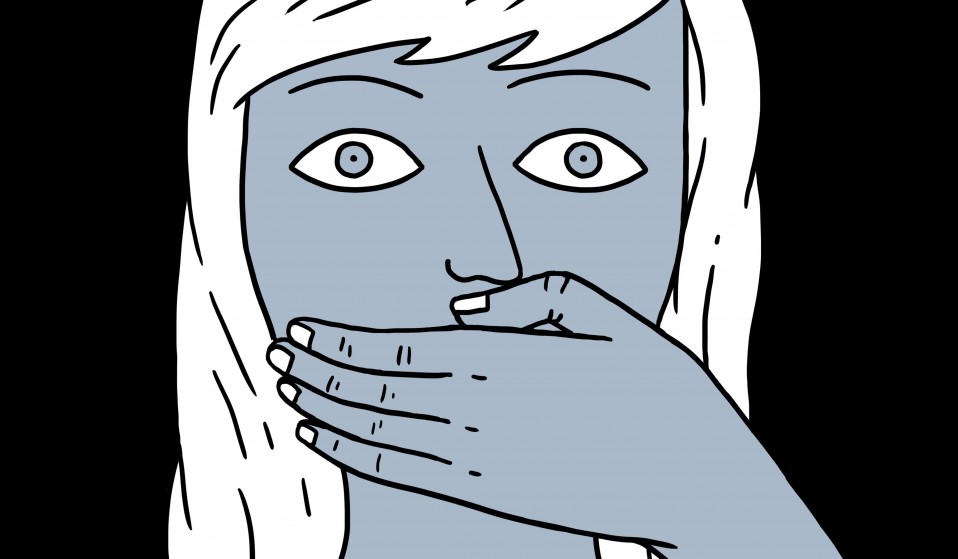 It’s taken years for Harvey Weinstein’s victims to come forward with their stories of sexual assault. But that shouldn’t come as a shock. The problem is pervasive, says Abi Wilkinson. And she speaks from experience.

It’s taken years for Harvey Weinstein’s victims to come forward with their stories of sexual assault. But that shouldn’t come as a shock. The problem is pervasive, says Abi Wilkinson. And she speaks from experience.

The thing that’s hardest to explain when people ask, “But why didn’t you say anything?” is the guilt. The guilt about making a fuss. The feeling that, though the thing that happened looms large in your own life – creeping into your head in quiet moments, damaging your relationships with other men, making you feel nervous in situations you’d previously have felt comfortable – it would be OTT to actually accuse him.

Being accused of something like that can ruin a man’s life. At least, that’s what we’re told. You have a responsibility to speak out in case he tries it again with someone else – but that also means you’re responsible for what happens when you do. Are you sure you’re remembering it all correctly? Was it really, truly violent or does it occupy some different grey area? Could he have believed you were consenting, even though you felt that you were not? Did you communicate clearly enough? Could you have done more to deter him? Is what happened really worth the whirlwind you’re contemplating unleashing? Is he actually a bad man?

As a society we take rape very seriously. So seriously, that it’s a label we wield with extreme caution. If it really is such a despicable, monstrous crime – if convicted sexual offenders have to watch their backs in prison, because even gangsters and murderers consider them the lowest of the low – then an accusation is a big deal. Branding someone a rapist is one of the most harmful things you could do to them. As such, women who’re prepared to use the word are often treated with suspicion.

I have several memories that I struggle to stick a label on. They’re in that tricky grey area between “truly consensual” and “unambiguously violent”. I said no repeatedly, but eventually conceded because I was 16 and not in my own home and I wasn’t sure I had enough money for a taxi, and it felt like an argument I couldn’t win. I had crawled into an upstairs room at a house party and passed out drunk, but the man who entered the room was someone I’d been flirting heavily with earlier in the night. There was a man who said he’d show me where to catch a night bus, who instead lead me into an alley and shoved his hand down my trousers as he pinned me against the wall, but he stopped not long after I told him to and the whole thing was over in a couple of minutes. A guy once contacted me on Facebook years after an encounter, to ask whether he’d assaulted me and apologise if necessary. I told him it was fine.

I have two memories I can label just fine. One from a couple of years ago, one from when I was 14. The more recent one wasn’t difficult to categorise. My attacker was a stranger. There was no prior socialising, no flirting, no possible room for ambiguity. I’m also older and more sure of myself. Most of the grey area incidents happened when I was in my teens. I went to the police. My story checked out and his, I was informed, changed more than once. It went to court and everyone told me there was a good chance of conviction. Before the verdict, I worried about his wife and children. I felt guilty for damaging their lives. I told myself it was necessary because of his job as an Uber driver. He had access to an endless stream of lone, intoxicated women, it was highly likely he’d try the same again.

After the verdict (not guilty) I felt furious and humiliated. I was livid that I’d wasted mental energy worrying about the harm it might do people in his life. That I’d felt empathy towards his wife – who sat in the courtroom throughout the trial and probably felt nothing but contempt towards me. Most of all, I was angry I’d believed that sexual violence accusations can ruin a man’s life. In a case that seemed pretty clear cut, ten out of twelve jurors still believed him. “Beyond reasonable doubt” is a necessary legal principle, but with crimes like this some proportion of people will always have doubts. It’s such a monstrous crime – how does that square when the man stood before you does not appear to be a monster?

In my mind, the incident when I was fourteen is similarly non-ambiguous. I was there and I know what happened. Had I gone to the police, though, I doubt it would have ever got to court. We’d been drinking vodka on a school field. I didn’t know him, he was in the year above at a different school, but we were part of the same social group. I wasn’t an experienced drinker and took myself off somewhere quiet to vomit, he followed. I told him I didn’t want to. The next morning there was blood in my underwear and the inside of me felt tender. I’d never had a proper boyfriend and had only been kissed twice before, but he told all his friends I was a slag. It affected my self-image and also how I was treated by other people.

A couple of years later, I ran into that same boy at a drum and bass rave and told him I forgave him. I was high on MDMA for the first time ever and confrontation felt almost chemically impossible. Even if I’d been sober, moving on would probably have seemed the easier option. He laughed in a way that suggested he understood what I was talking about, but didn’t consider it nearly so grave an issue as I did. I felt guilty for bringing it up. The following day, I felt angry at myself for letting him off the hook and wished I could retract my forgiveness. I found his accounts on social media purely so I could block them all.

However vocal I am in my feminism – however unconditionally supportive I am towards women and girls who’ve gone through similar or worse, however much I campaign on these sorts of issues – I can’t shake the feeling that, at some level, everything that’s happened is my own fault. That the jury failed to convict because they correctly spotted that I wasn’t a real victim, which means that he wasn’t really a sex offender. Even describing my experiences makes me feel like an imposter. Like I’m asking for sympathy that I don’t deserve. I often wonder how many women feel the same way.

Linkedin
RELATED ARTICLES
OTHER ARTICLES
The action took place in response to the 200 asylum-seeking children who were placed in hotels run by the Home Office who have gone missing.
After blocking the Scottish government’s gender recognition reform bill, Westminster is now devising further changes to the law to make it harder for trans people to self-identify.
David 'Dee' Delgado’s photo project is about honouring and uplifting the city of his youth, and a world rapidly disappearing under the relentless onslaught of gentrification.
At his West Bank restaurant, Fadi Kattan established himself as the voice of modern Palestinian cuisine. Now, he’s bringing his innovative, bold flavours to the UK’s capital.
A recent High Court ruling against the right to wild camp in Dartmoor National Park sparked the largest land protest in history – and campaigners say their fight is not over yet.
A new podcast is opening up the conversation between trans women and trans amorous men in the hope of building coalitions.