News & Politics / Too poor to die: the rise of crowdfunded funerals 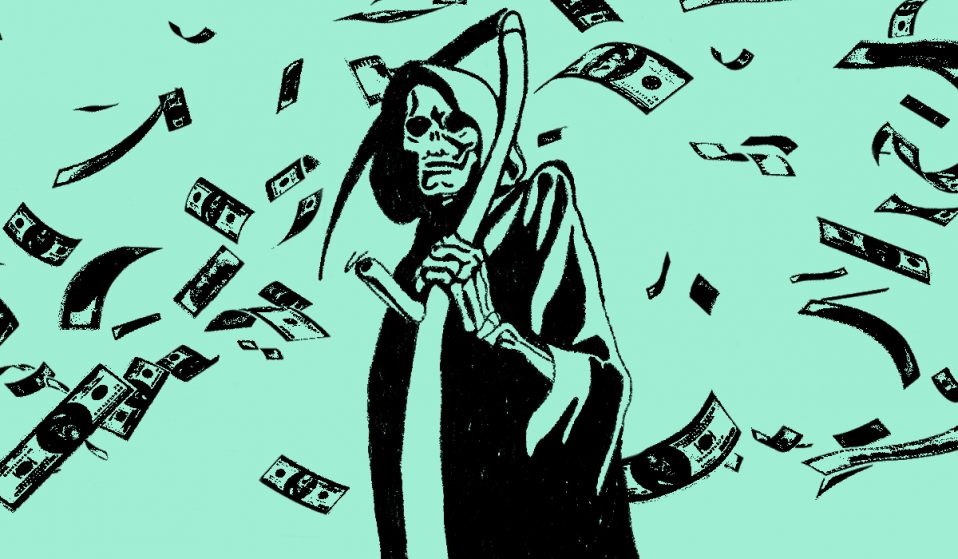 Amid soaring inflation, more families are having to turn to the kindness of strangers to shoulder the cost of dying.

Dying has always been expensive. But now, amid soaring inflation, more families are having to turn to the kindness of strangers to shoulder the costs.

When Cerys Defis lost her mom, Tresi Davies, to bowel cancer in August 2021, it fell to her and her brother Aron to pay for the funeral. They couldn’t afford it. 24-year-old Cerys was studying for a master’s degree and caring for her mum. The Carer’s Allowance is no more than £67.25 a week, which hardly left room for her to save for a funeral. Her mum did have savings, but the bank won’t release the money until they have the grant of probate – which Cerys is still going through, over a year later. Their dad was in hospital too, with a spinal infection, so he didn’t have an income either.

A grieving Cerys was hit with a sobering realisation: dying is really expensive. “It’s a bit of a crime, how much a fucking funeral costs. Because why does it cost to die?” she tells Huck. Funeral prices have more than doubled since 2004, and SunLife predicts a basic funeral will cost over £5,000 in 2026. They also found that 113,000, people experienced notable financial concerns when paying for a funeral in 2021, while life insurer Royal London found that people are taking on an average of £1,744 of debt to pay for one.

The rising cost of living is only going to push more people into funeral poverty, and it’s not just the funeral you’ll be invoiced for. Cerys remembers that “everything had a hidden price”, even seeing her mum’s body after she died. There’s the coffin, embalming, keeping the ashes after cremation, flowers, the hearse, the type of service, where you have it and the food you serve. All of this amounts to the cost of dying, which SunLife calculated to be £8,864 in 2021.

These rising prices have left people like Cerys with no choice but to crowdfund to fill the gaps. More than £225 million is raised on 125,000 memorial fundraisers per year just on GoFundMe alone. Lindesay Mace, the co-manager of Down to Earth, a funeral costs advice service run by the charity Quaker Social Action, says they’ve seen an increase in the number of people crowdfunding for funerals. “People can feel ashamed or guilt about not being able to pay for a funeral, so it can be difficult to set up the fundraiser in the first place,” Lindesay says.

This was certainly the case for Cerys. Her mum’s friend set the page up because Cerys felt “too rude” to ask for money. The fundraiser was a success: they raised £6,120. But others aren’t so lucky. “I speak to some people who say, ‘I tried a crowdfunding page but it hasn’t worked’,” Lindesay says. “It depends on how big your network is and whether people can give. Now that more people can’t ensure that they’re heating their house, or putting food on the table, let alone give money to help others, that’s probably going to get more difficult.”

Not everyone is crowdfunding. SunLife found that people are borrowing from a friend or relative, using a credit card or loan provider, paying the funeral director in instalments, or borrowing money from a loan provider, while 16 per cent also sold their belongings to cover costs. Also, a quarter of all funerals carried out between February 2020 and July 2021 were direct cremations – cremations without a service – as they are the cheapest option. Meanwhile, British Seniors found that on average, loved ones contribute £1,963.

This burden often falls on people aged 18 to 24, like Cerys, who lost her dad just a month after her mom passed away. “All that [crowdfunding] money had gone to the funeral. And now we had to be cheeky and ask again because we didn’t have a fucking penny. We had about £1,500 from my dad and all of that went on the cremation.” They didn’t raise as much this time, so Cerys put her foot down against family members who wanted a more traditional funeral. Instead, Cerys planned a simple service in the park where her Dad’s pipe band played.

Money is the last thing people want to worry about when someone they love has just died. Down To Earth has seen a consistent increase in people calling their helpline, and more are mentioning the cost of living crisis when they do. “We’ve supported people who are using their rent money to pay money towards a funeral director,” she says. “One client said if she had to just eat toast so she could make regular payments to the funeral director, and look after her kids, then she would.” Down To Earth support up to 800 people a year, which Lindsay says is just the tip of the iceberg. “There are a lot more people that need help and that help should be coming not from charities, but from the government. It’s a scandal in a country that is one of the richest countries in the world.”

In England, Wales and Northern Ireland, the government offers support in the form of a Funeral Expenses Payment, in Scotland, it’s the funeral support payment. But the eligibility criteria are complicated. It’s only available to people in receipt of other benefits, like Universal Credit, which people are waiting months to get due to a major backlog in cases. And, even if you do manage to get it, Down to Earth found that the average award only covers 44 per cent of the costs. “It’s vital that it’s increased by the government,” Lindesay says.

Having a funeral is extremely important for grieving and wellbeing, according to The Bereavement Commission, the largest-ever consultations on bereavement support undertaken in the UK. However, “funerals can add to the already high administrative burden” and financial pressures. A Down To Earth client, Kaesha, was thankful for the Funeral Expenses Payment when her partner died, but she still had to take on debt. The 42-year-old had to keep working – right up until he passed away, and just days after his funeral. “I had debts to pay back so I couldn’t take much bereavement off,” she says. “I had the choice of breaking down at work, or taking days off and not getting paid. When people are not financially able to bury their loved one and they have to work, I think they miss out on vital time that they can’t get back, because the person is gone forever.”

The funeral industry isn’t regulated, meaning funeral directors can charge whatever they like. The Financial Conduct Authority started regulating the pre-paid funeral industry in July 2022, meaning that any firm selling a funeral plan must be authorised to do so by the FCA. This is a start, but it only benefits people who can afford to put money aside each month. Funeral directors only had to display their prices since September 2021, and some still don’t. Every month, Down to Earth report over 200 funeral directors to the Competition and Markets Authority for not complying with this new order, which doesn’t even amount to legislation.

The price of funerals varies widely depending on where you live, too. The average cost for a burial in Kensal Green in London was £13,262, while the cost of a cremation in Belfast – the least expensive area for funerals – came in at £2,863. Local councils must arrange something called a Public Health Funeral for anyone dying in their area where there is no one willing or able to arrange the funeral – but Royal London found that 21 local authorities were charging a fee to return the ashes. A Public Health Funeral can also be planned by people who know they are dying. “I supported one gentleman that did not want to be buried,” says Lindesay. “But in that particular area of the country, the default was that they buried people. And, unfortunately, there’s nothing in the legislation to stop councils from burying someone against their wishes. So if he has a public health funeral, then he’d have to be buried. That was quite distressing for him to know that in advance of dying.”

Funeral poverty is devastating the lives of people in grief. Death is inevitable, but it can be unexpected. A huge question needs answering: what role should the state play in paying for funerals? Death is a certainty, yes, but many people don’t know how expensive it is to die until they are forced to find out. And besides, saving for a funeral is just not an option for thousands of people when all of their time, energy and money is spent on staying alive.

Linkedin
OTHER ARTICLES
Max Miechowski reflects on documenting land that is being lost to the sea – and the people who live life on the edge.
As the cost of living crisis bites, letting go of treats to keep us going is proving difficult – but we should’t just blame ourselves for our financial worries.
Photographer Jeffrey Silverthorne always treated his subjects – often those living on the margins of society – with empathy and respect.
A new exhibition is marking the photographer’s 100th birthday with a look back at his extraordinary career.
A new documentary tells the story of an unassuming cul-de-sac of 13 timber framed houses built by Fusions Jameen – London's first Black housing co-op.
We sat down with trans comic Jordan Gray to discuss the power of portraying complex characters, giving humanity the benefit of the doubt and getting naked on live TV.