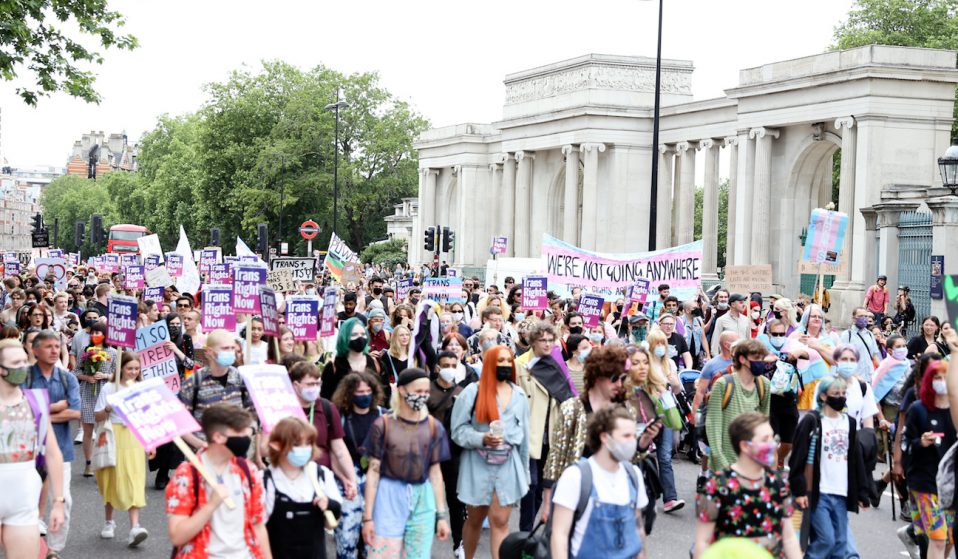 This Trans Day of Remembrance, a shift in focus is needed to address the systemic causes of transphobia and violence that trans people face at home and abroad.

This Trans Day of Remembrance, a shift in focus is needed to address the systemic causes of transphobia and violence that trans people face at home and abroad.

Every year on 20 November, communities around the world gather to honour trans and gender diverse people whose lives have been lost as a result of anti-trans violence. Trans Day of Remembrance (TDOR) – often marked by candlelight vigils and publicly reading the names of those who have been killed over the past year – is an important touchpoint in trans communities. It encourages us to pause, reflect and remember the real people behind unreported news, sensationalised stories and cold statistics. This year is reportedly the deadliest on record for trans people and reading through the official list of killings is truly chilling.

Our  rituals of remembering are about bringing humanity back to our community members, who are so often denied that dignity in life. Solidarity takes many forms, and this is certainly one of them. A phrase frequently invoked on TDOR is “Honour the dead and fight like hell for the living”.

It is important to recognise that most of the TDOR recorded deaths are Black and migrant women of colour, sex workers and many are from the global south; their deaths are often the result of intersecting forms of poverty, racism and violence. Such deaths are not simply ‘isolated’ events enacted by lone, ‘hateful’ perpetrators; they are the acute manifestations of wider cultural norms and institutional structures which devalue trans lives – particularly through systemic racism, xenophobia and poverty.

Many more trans people die prematurely each year than are officially noted on these lists. This is because many countries do not adequately record acts of transphobic violence, but also because records do not monitor deaths that arise from wider structures of transphobia.

Though mainstream media doesn’t always report trans deaths by suicide, drug overdose, poverty, mental ill-health, and HIV-related illness, many trans communities acutely know the pain of lives cut short by these realities.  While it is impossible to attribute a single ‘cause’, these deaths reveal the accumulative effects of systems and structures that deprive marginalised people of basic needs. It is the slow violence of poverty, addiction, homelessness, imprisonment and denial of health care.

For many of us, TDOR is more and more painful each year, as we reckon with the growing number of friends and chosen family we’ve lost as a result of these wider structures of harm. We ache with the losses of loved ones who have died in prison, those who have ended their lives as a result of acute mental distress, been denied adequate health care or disability support, hounded by hostile media, and repeatedly let down by the very social systems that were meant to protect them.

Yet so often when marking TDOR, these larger structures of poverty, racism and institutional violence are obscured. Instead, trans communities are asked to “prove” transphobia exists by pointing to horrific acts of violence and hatred. We become caught in a trap that pushes us to frame violence and transphobia as a problem of individual acts and attitudes, rather than a consequence of wider social structures and systems of harm.

We recognise that when our positionality and systemic issues are not foregrounded, TDOR events can invoke a saviour-like dynamic, particularly when the more privileged among us, who don’t directly face the sharp end of anti-trans and racist violence, read the names of those who do. A vigil can be an important place to remember the real full lives of those lost and show solidarity with those who face violence. But outside these vigils we must recognise the actions needed to fight against the systems that contribute to violence here and elsewhere.

Not addressing wider structures of harm also paves the way for ‘solutions’ which don’t actually help our communities. Too often we are encouraged to channel our energies into tougher laws, more policing, and harsher sentences for people who commit violence, rather than focusing on improving the lives of trans people through health care, housing, and income security – key factors which can help protect against violence.

Law and order responses, such as hate crime legislation, won’t actually protect trans communities. Instead, such laws give more power and resources to police, courts and prisons – institutions which disproportionately target trans communities who are already over policed and under protected. Trans sex workers, for example, are forced into less safe working practices by criminalisation, police harassment and risk of imprisonment.

TDOR provides an important opportunity to clarify what we need to fight for and how to move from passive witnessing to active solidarity. It is a chance to focus our collective efforts on strategies that will actually reduce violence in the long run and support our communities to not only survive but flourish.

We hope that TDOR revitalises energy into national and global campaigns to decriminalise sex work; decriminalise drug use; end the violence of border controls, demand racial justice; redistribute wealth and ensure free, inclusive and accessible health care for all. TDOR solidarity means channelling our energies into campaigns that get to the heart of the structural injustices that fosters anti-trans violence in the first place.

This Trans Day of Remembrance, as we assemble to light candles for those who have died, let us also light a fire under the action needed to truly honour those lost, by joining together to fight like hell for the living.

Linkedin
RELATED ARTICLES
OTHER ARTICLES
For over a decade, gamblers have won big by employing people to place live bets from the court. But does this dubious method still work?
As the Scottish government announces a rent freeze, an activist with Living Rent who fought and won shares how they did it, and what must come next.
By turning a real-life crisis into daytime television fodder, TV bosses have once again shown themselves to be completely out of touch with audiences.
Yesterday thousands gathered outside Buckingham Palace after news of the Queen’s death broke.
Cindy Campbell recounts how her brother ushered in a new era of musical culture at a party she held in the Bronx in ‘70s.
Rhiannon Adam spent three months capturing an ageing society wracked by division, isolation, and the aftermath of scandal.