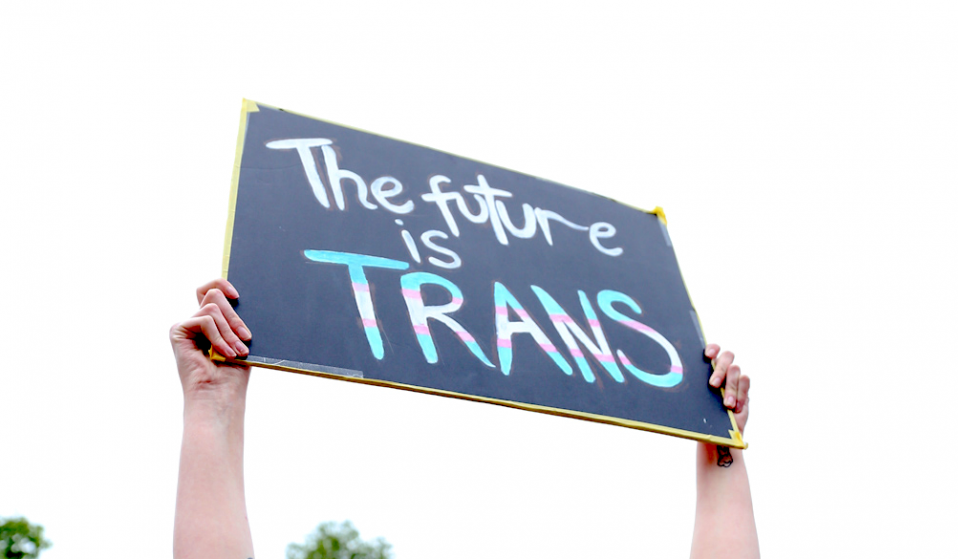 All too often, transgender people are framed as a problem to be solved – but what if the focus shifted to encompass trans joy?

All too often, transgender people are framed as a problem to be solved. In Liam Konemann’s new book, The Appendix, he calls for the focus to shift to encompass trans joy.

Like sex, drama sells. In a climate that has framed transgender rights and acceptance as a debatable topic, a polarising issue that has sides and opposing considerations, the media appetite for stories of trans dysphoria, legal battles and opposition is a self-perpetuating cycle. People tune in because the talking heads covering ‘the transgender debate’ have made them believe that it’s relevant, and the talking heads cover it because people tune in.

But it has to be dramatic – the viewer has to feel like the issue they are being sold is legitimate, rather than an unreasonable campaign against a minority group. There’s no room for positivity or the fullness of the trans experience. No need to make the straw man flesh and bone.

The fixation on the perceived trauma and disruption of trans lives can make it seem as though being transgender is a parade of misery, dysphoria and fractured relationships. Newspaper articles about ‘trans widows’ – people who have broken up with transitioning partners and would rather, apparently, behave as though their former spouse were dead – and moral panics about gender-diverse children contribute to a grim narrative. Beyond this, because trans people are forced to talk about our pain and dysphoria in order to access healthcare or gain legal recognition, we too must trot out our trauma so that we might be able to gain any kind of purchase on the lives that we deserve. The joys we experience are rarely considered.

Looking at the state of the press, you might never know that trans people have loving partners too, or that trans children are predicted to have much better life outcomes if they are raised in an environment that supports their identity. It is rarely acknowledged in cis-led media that some trans people have no dysphoria at all, and may not undergo any hormonal or surgical interventions, yet still live happily in their correct genders.

Gender euphoria – the opposite of ‘dysphoria’, the comfort and delight in one’s gender identity or presentation – is a huge part of the trans experience. For myself, it is near-delirious happiness, and the understanding that I know myself completely. Gender euphoria is what gives me the resilience to carry on under the weight of transphobia and oppression. It is the phenomenon that proves most clearly to me that I am not what people say I am – not unwell or self-hating but in actual fact lucky, whole. For outsiders to never acknowledge this side of the coin is missing the point, and flattening the richness of our experience.

Here is an important distinction: it can be valuable and necessary for trans people themselves to talk about trans pain. As a community, we still face many difficulties in this country, from long healthcare waiting lists to homelessness and hate crimes, on top of the other oppressions that some of us experience, such as racism, homophobia, and misogyny. We cannot discuss these inequalities without in some way referring to trans pain. We cannot campaign against these issues without indicating their effects.

The issue is that, when it comes from the outside, coverage of transgender people usually frames us only as a problem to be solved – a logistical difficulty at best, and an outright threat at worst. Among the numerous other harms that relentless commentary like this inflicts on the trans community – not to mention the real-world impact it has on the social climate – it also does us a disservice. Joy and gender euphoria are just as significant markers of transness as discomfort and dysphoria, and to suggest otherwise leads to people thinking they are ‘not trans enough’, or that their experience only counts if they are suffering. It leads to a cycle in which the media is only interested in us when we can be presented as either the root of a problem, or the victims of it, never as full people – as artists, activists, friends, or members of the community.

The toxic ‘debate’, and the faux-concern about other people’s choices and their ‘irreversible consequences’, also frightens people out of taking steps that could make them happy. Transition is a major life event, like coming out as gay, committing to a partner, or moving to a new city. These changes can be stressful enough as it is. All decisions have knock-on effects, and all of them change the shape of your life. The scare-mongering around transitioning, in particular, serves only to make people’s lives more difficult.

How can anyone have the faith to do what might be necessary for them to live fully, if all they hear is that people will leave them, that they will hate their bodies, that people who should be their allies will want to exclude them from gay spaces? These things, of course, do happen, but they are not the sum of what the world is. People fall and stay in love, rejoice in trans bodies, and stand in solidarity with their LGBTQ+ siblings. It matters that we talk about it.

When we talk about trans happiness, we make visible a reality in which a trans life is not a problem, or a disaster, but a gift. We get closer to the reality of the trans experience in its entirety, and make space for transgender people to be seen as something other than a burden or a crisis. And we allow other to see that all is not dark, that gender euphoria is just as relevant as dysphoria, and, what’s more, within reach. To make space for euphoria allows room for hope.

The Appendix: Transmasculine Joy in a Transphobic Culture is out now on 404 Ink.

Linkedin
RELATED ARTICLES
OTHER ARTICLES
A 37-year-old woman shares how her abortion led her to become a clinic worker, and the abuse she’s received in that role.
With skyrocketing rents, packed out viewings, bidding wars and more, renting in London has never been harder.
A new project is documenting formerly incarcerated people as they transition back into civilian life.
Ahead of the release of their first collaborative album, the producer and rapper talk psychedelics and the state of UK hip hop.
The two-day long event returned to London this year, showcasing a spectacular parade, steel bands and Caribbean food.
In his 2008 series, the photographer pictured himself as Angela Davis, Martin Luther King Jr., Malcolm X, and other prominent figures.