News & Politics / The Travel Diary: Searching for scars of the Armenian Genocide 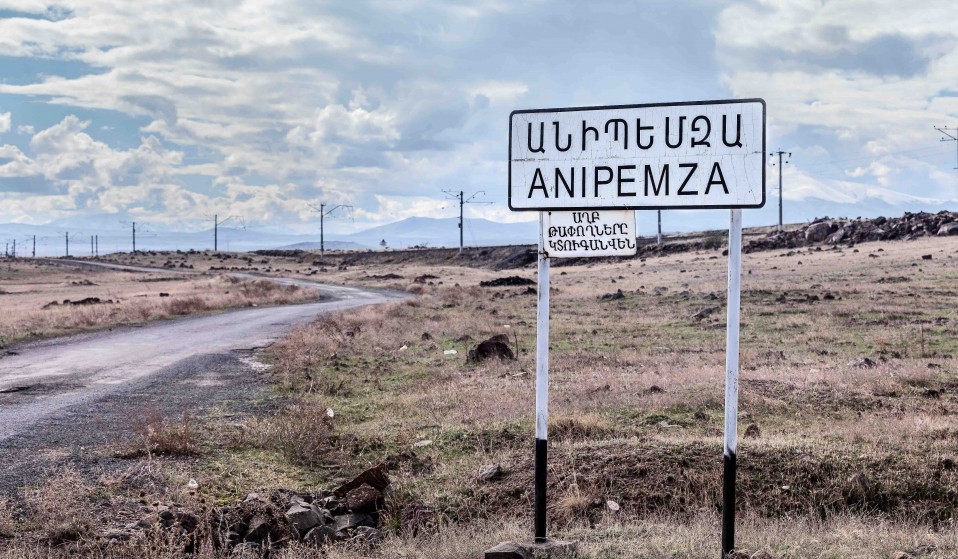 The Armenian Genocide of 1915 saw 1.5 million people systematically killed by the Ottoman Empire, and later the Turkish state. Daniel Gansen, an Armenian-German photographer, headed to the country to see what scars have been left.

The Armenian Genocide of 1915 saw 1.5 million people systematically killed by the Ottoman Empire, and later the Turkish state. To this day, Turkey refuses to recognise this mass extermination for what it is. Daniel Gansen, an Armenian-German photographer, headed to the country to see what scars have been left.

My first adventure, so to say, was in Armenia.

I have always been proud of being Armenian. Though I never learnt the language, I knew many Armenians, and I feel the pain many did and still do. The pain of not being heard. Of denial. No one could imagine a world where Hitler surged with his plan of killing the Jews and got away with it, but the Armenians do. 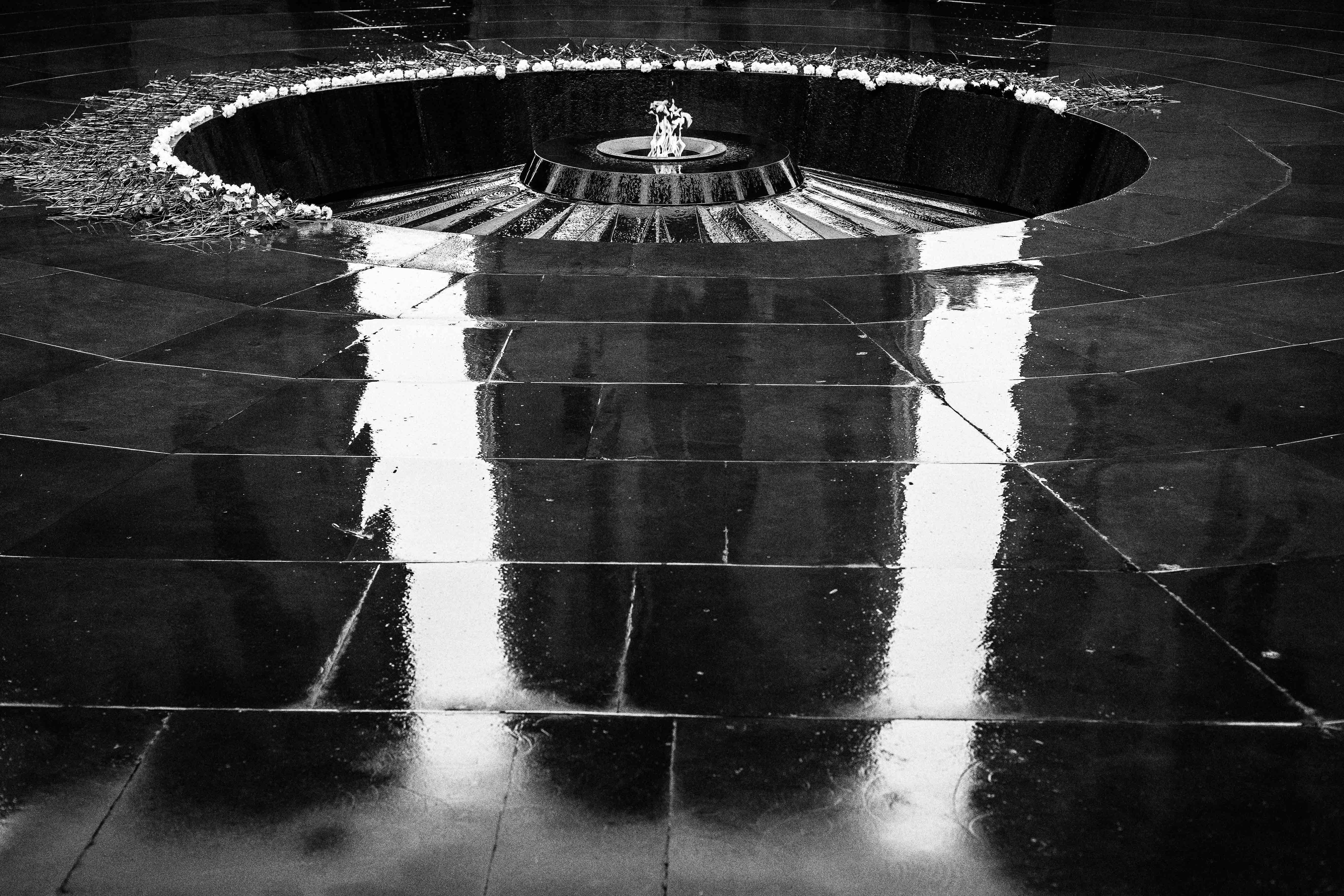 Turkey still denies the facts of the genocide in 1915, which is basically like putting someone in front of a car and then saying, “thatʼs not a car, itʼs a bicycle”. 1.5 million Armenians were murdered, families rounded up and put to death.

I set out to find the ruins of that genocide, so I headed there to visit, to explore. What I’d soon learn was that the scars, the ruins, are in everything.

Being half-Armenian, it almost felt like a duty. But I told myself I wouldn’t let my emotional Armenian side take over. I was wrong. 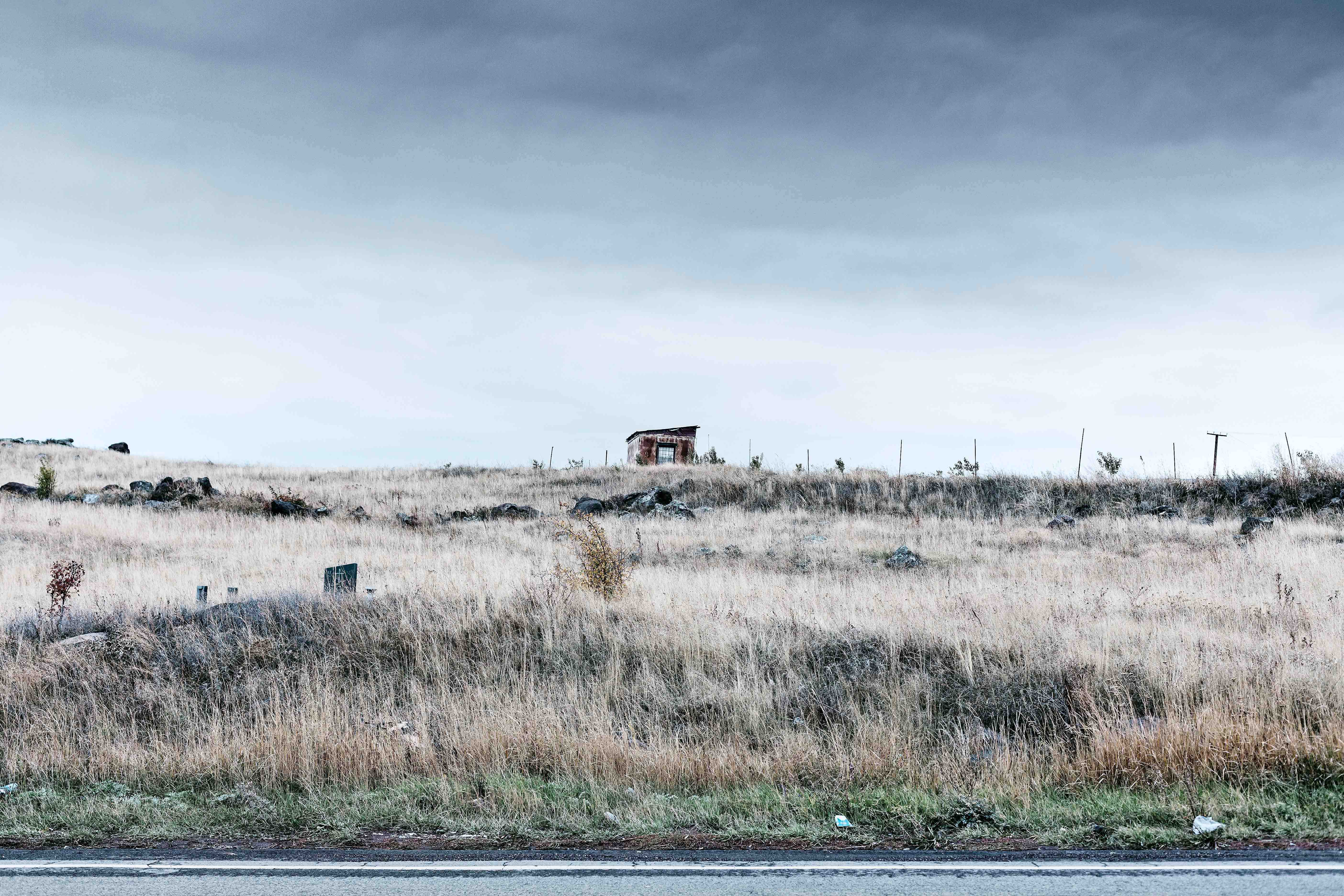 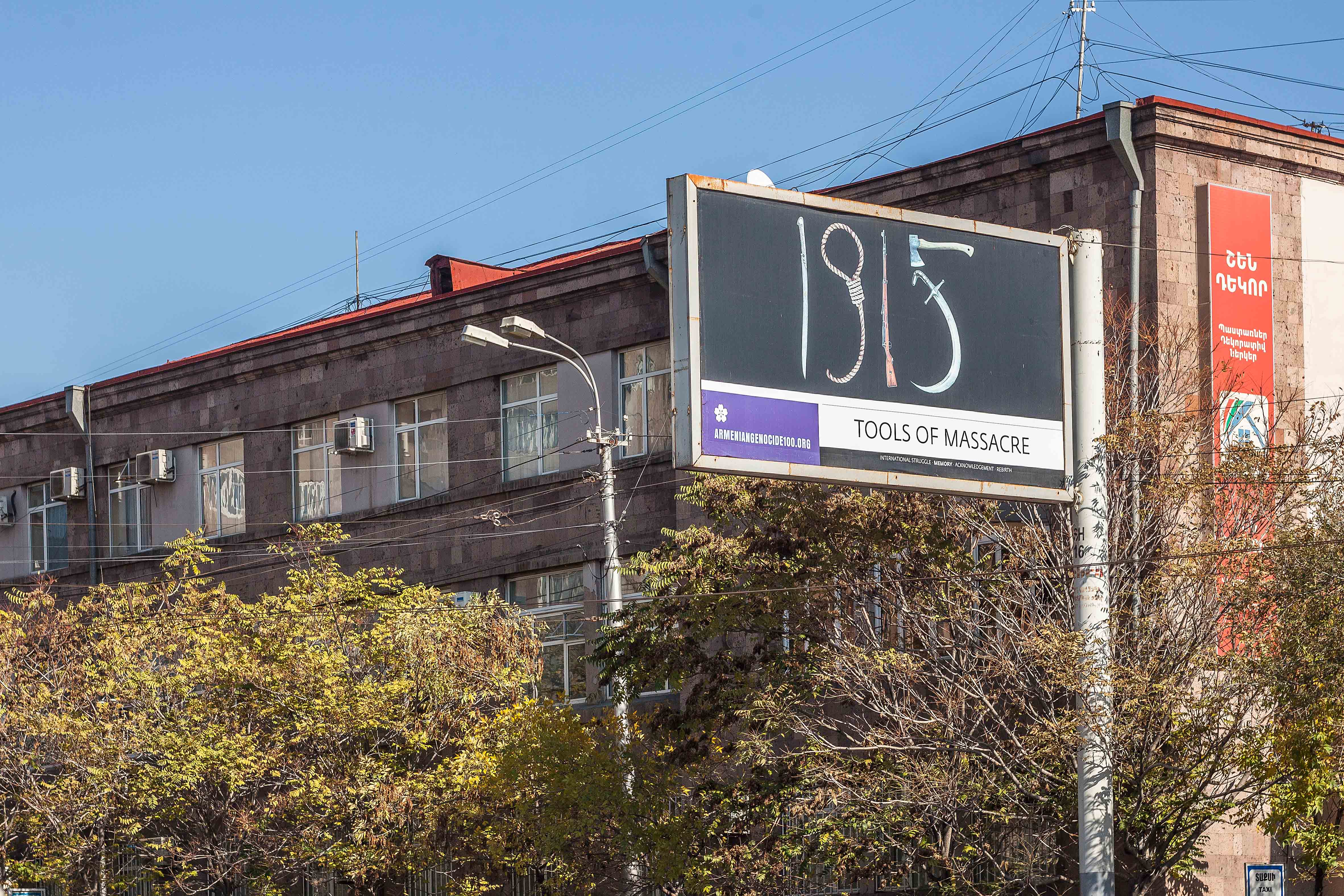 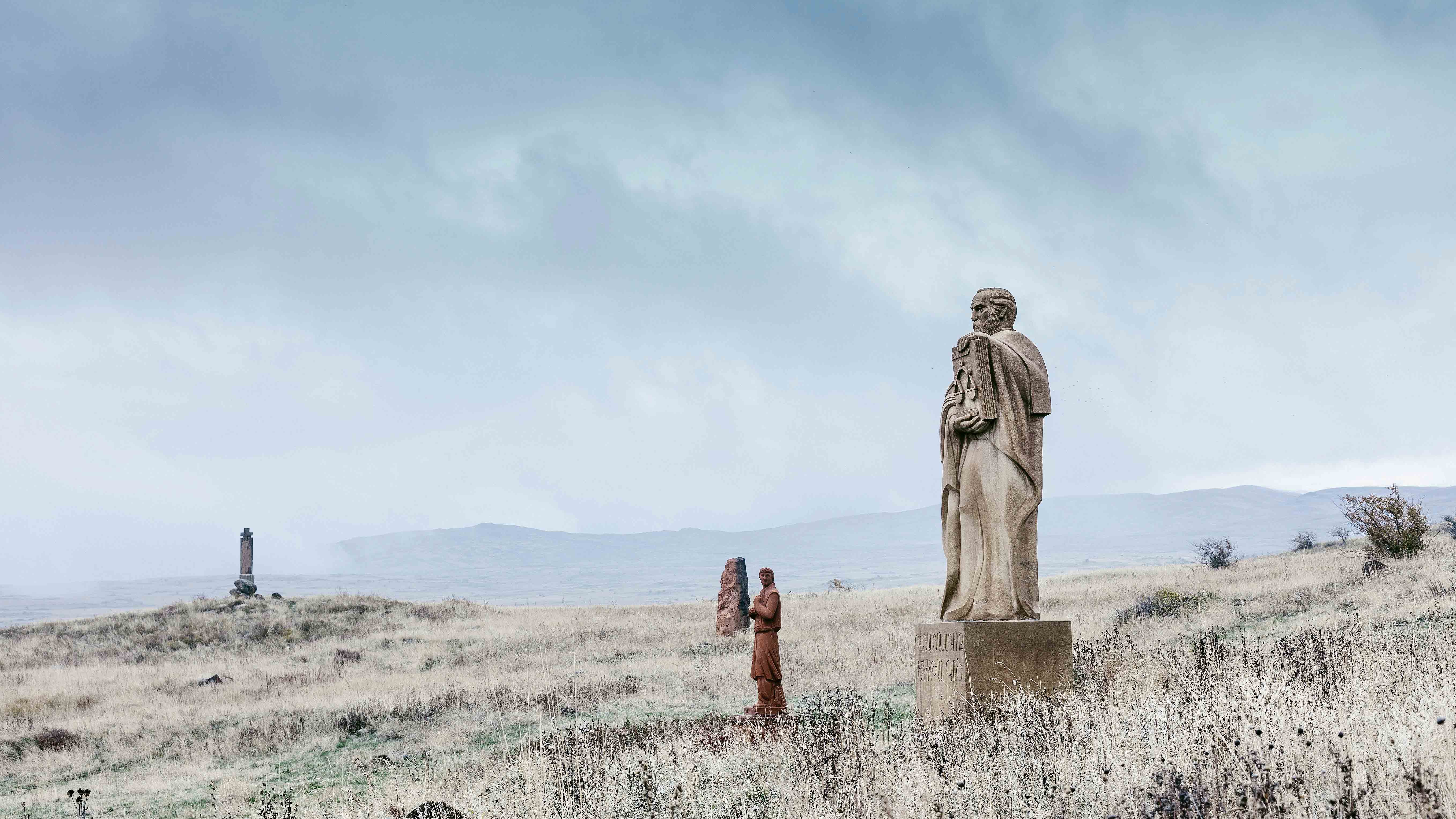 I land in the capital, Yerevan, and begin to get my bearings.

I enter the Armenian Genocide Museum with its haunting music playing in the distance, like ghosts calling after their loved ones left behind. On my left a wall stretches towards the memorial, filled with cities lost in the Armenian genocide, including the city of Van, my family’s place of origin.

Itʼs unsettling seeing it carved into that wall. Still wet from the rain.

Untouched by the rain was the fire burning in the middle of the memorial: the everlasting flame. It  burns for all the people that died and for everyone else who shares their loss. I’ve never been superstitious, but this place felt ominous. As if the people killed still remained in that circle. 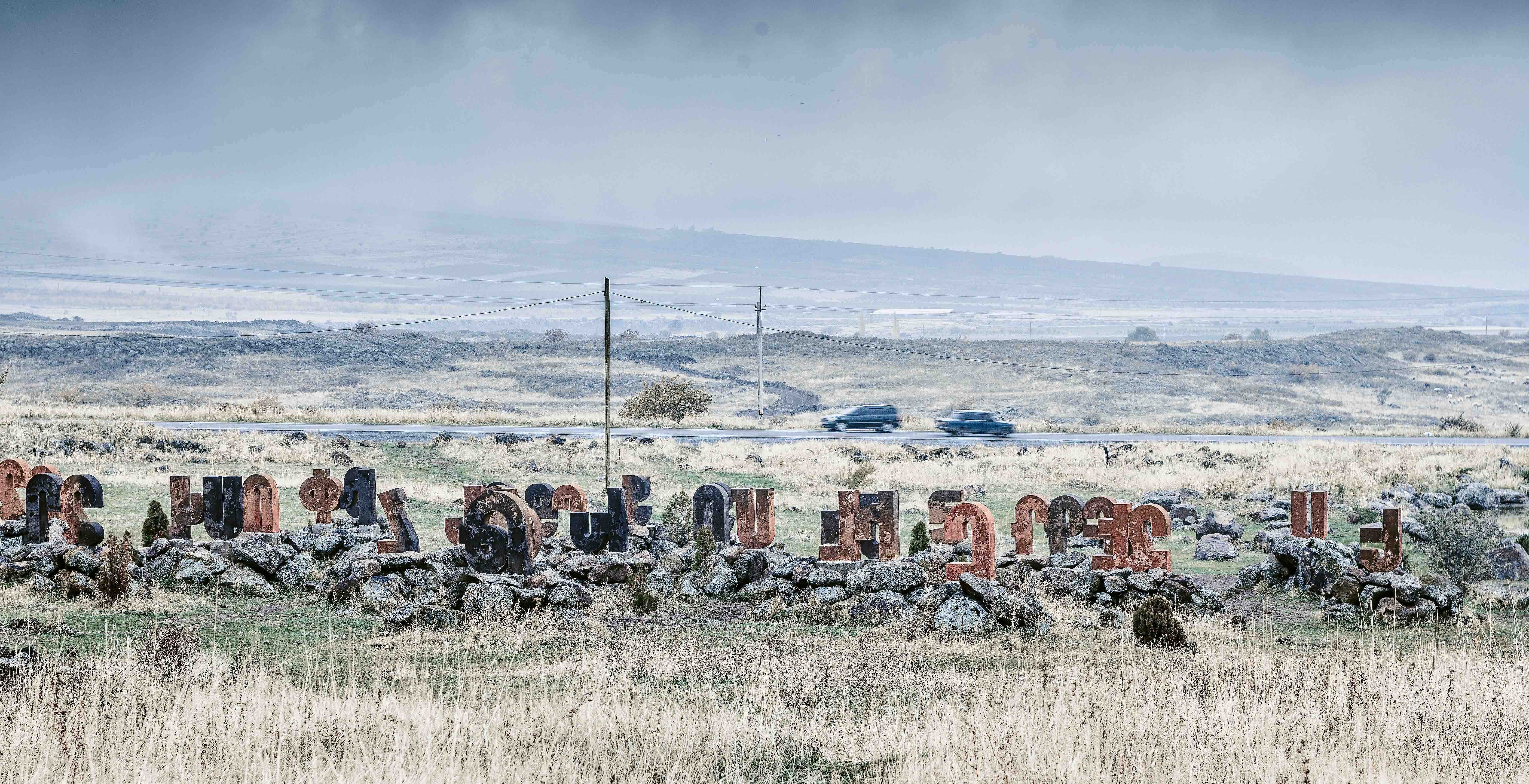 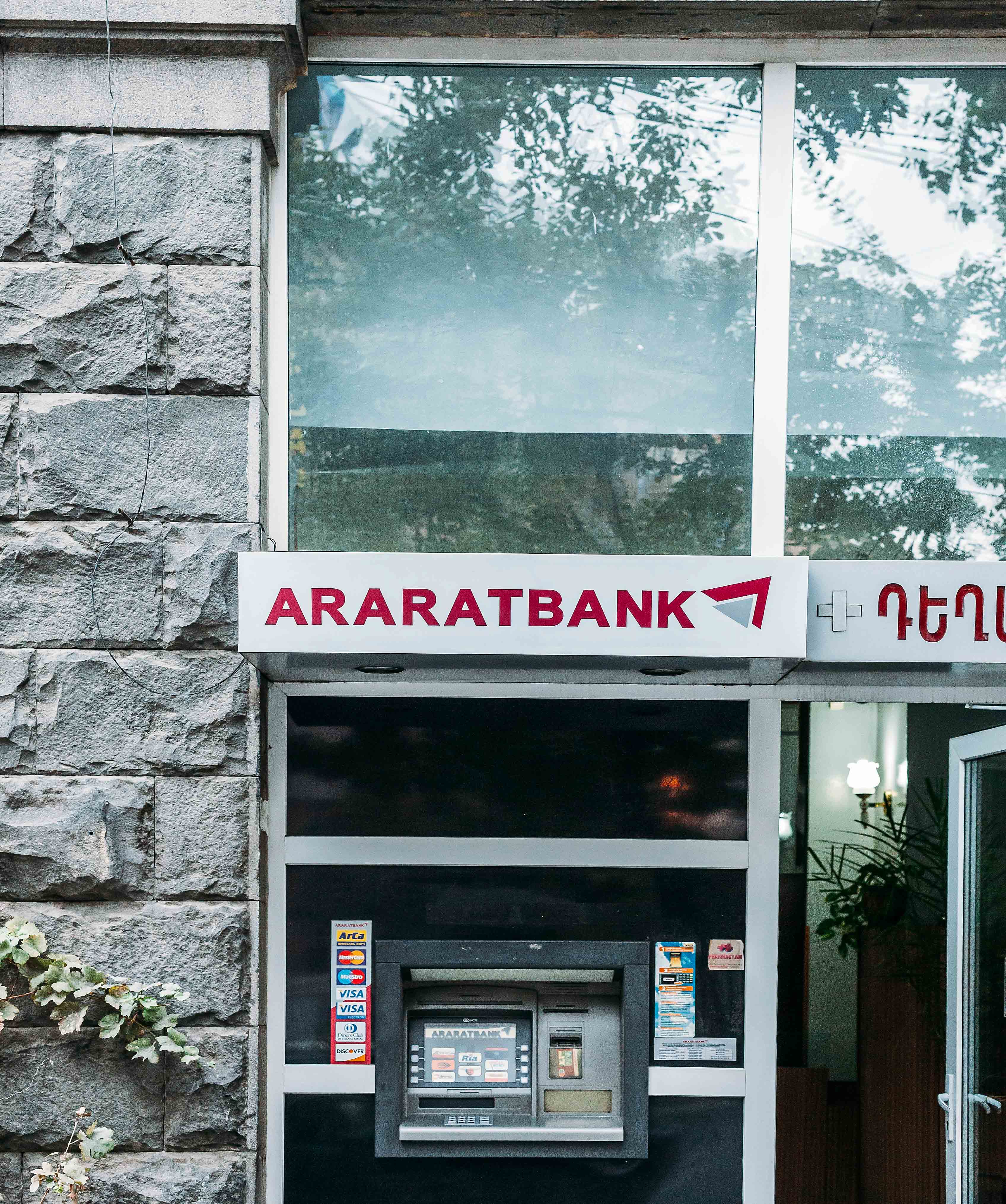 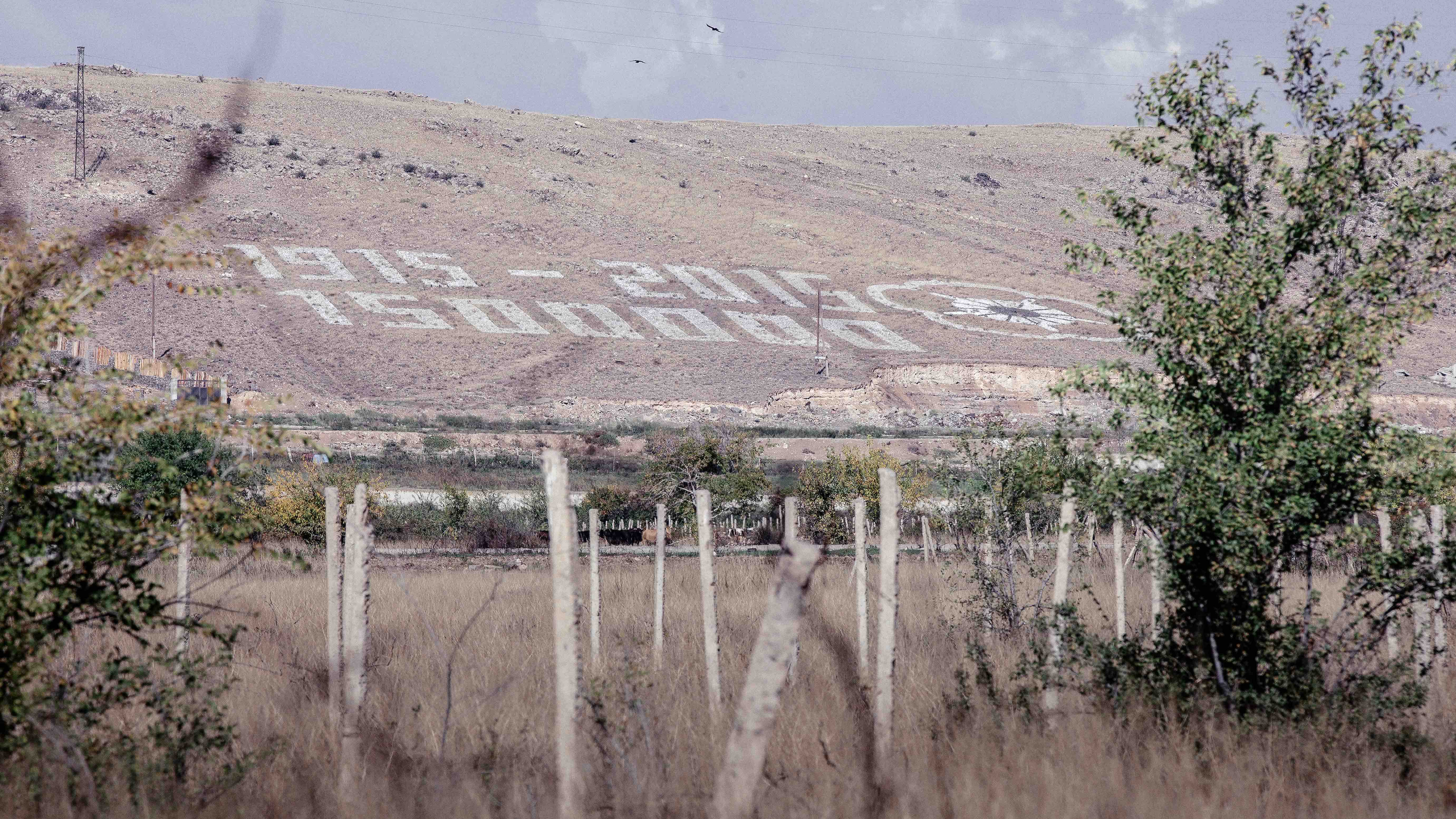 After that I didn’t stay long in Yerevan. I needed to get moving: I needed stories, needed pictures. The first place I wanted to visit was the Alphabet Park.

The Armenians are proud of many things, one of those things being their alphabet. With 36 letters it’s unique, and there are plenty of monuments in honour of it.

But there is one that caught my interest just outside of Yerevan, up north towards the village of Artashavan.

Why the hell would you want to put it out here? Surrounded by deserted land, with stray dogs scavenging food, it was here during the genocide that people were sent on death marches. 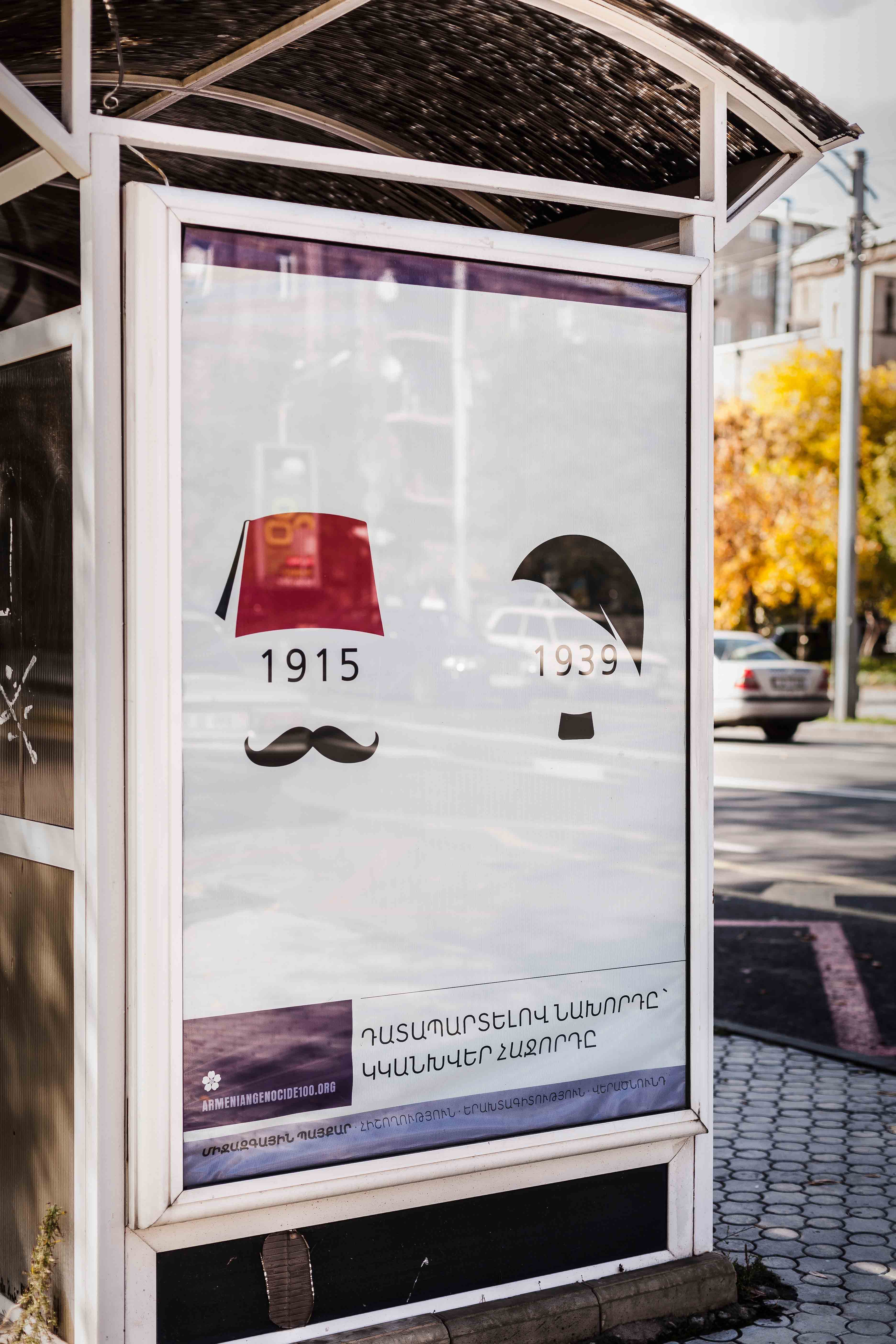 They were forced to walk hundreds of miles through the desert. Many died of starvation, those living knew knew that this was their fate still to come.

They wrote prayers into the sand, onto stones, anything they were able to leave a print behind on. In case the people of Armenia were to die, at least their language would survive.

Next up I was to head to Anipemza, a town close to the border with Turkey, where the old city of Ani can be found. Well, what’s left of it.

We set off in a car, me and my new friend, a taxi driver. As we got closer I came to realise that my good friend and the driver didn’t know shit about where Anipemza is. So at the next intersection, when we see a white car waiting its turn to merge into the traffic, we ask for directions. 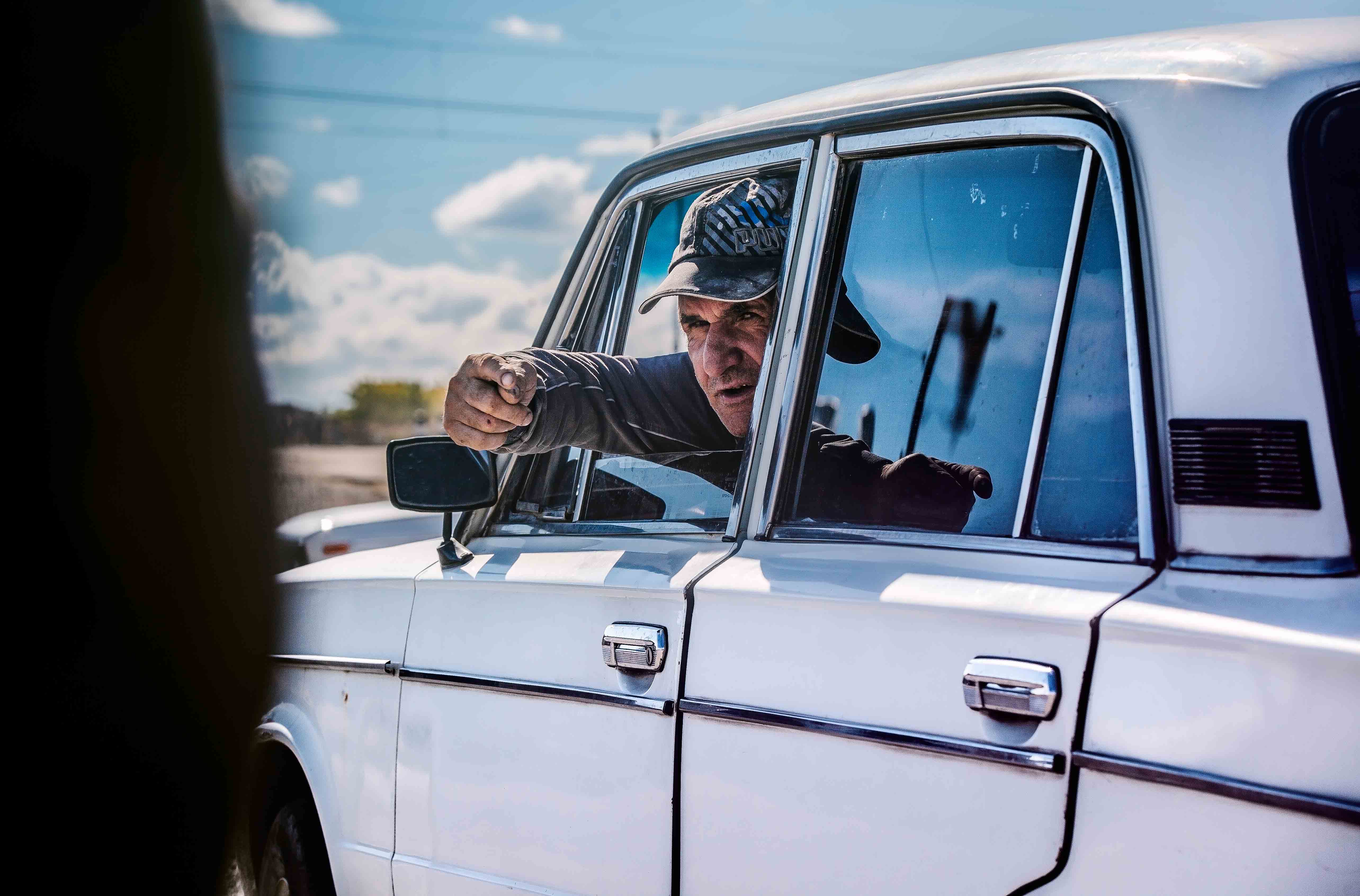 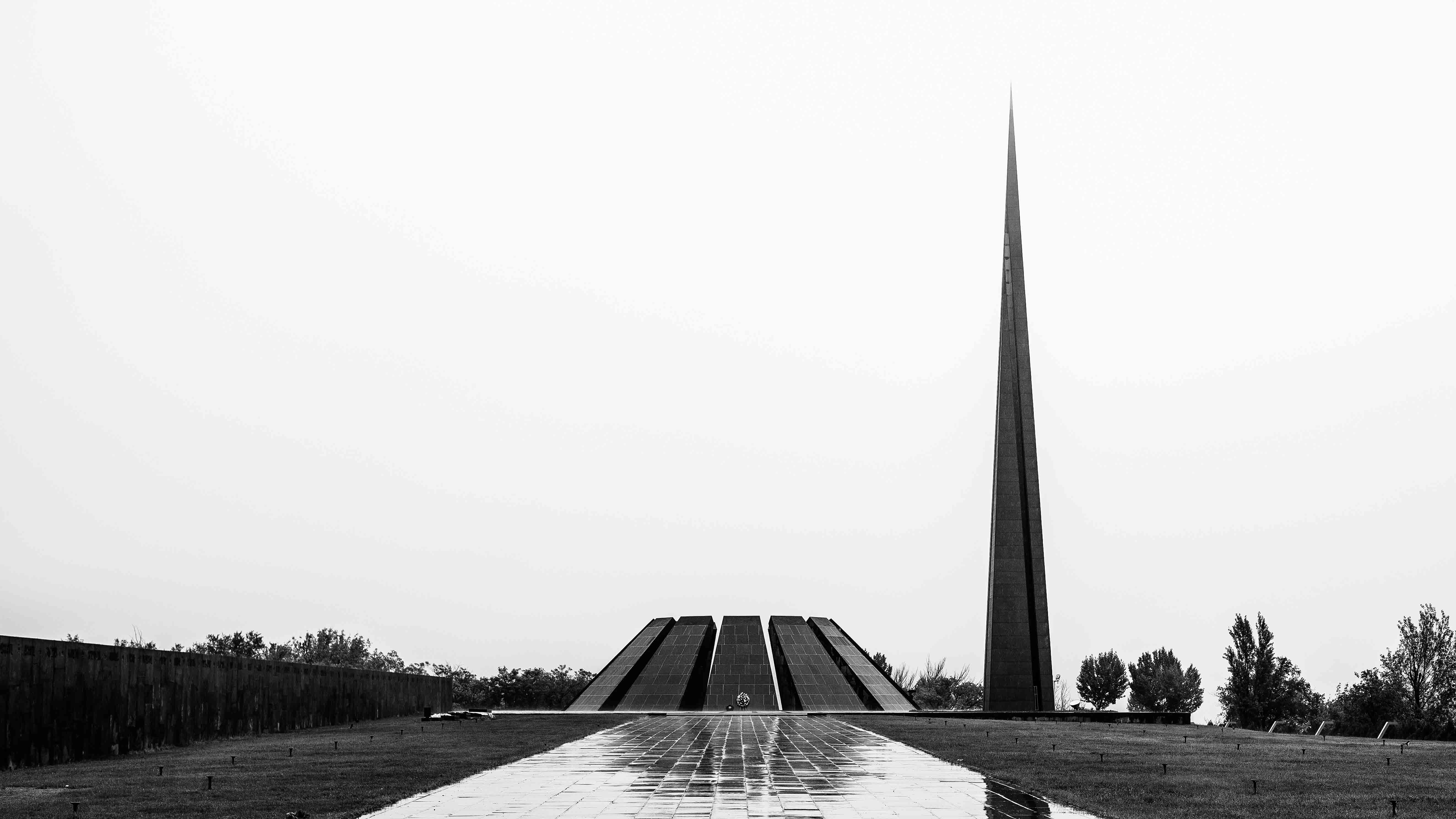 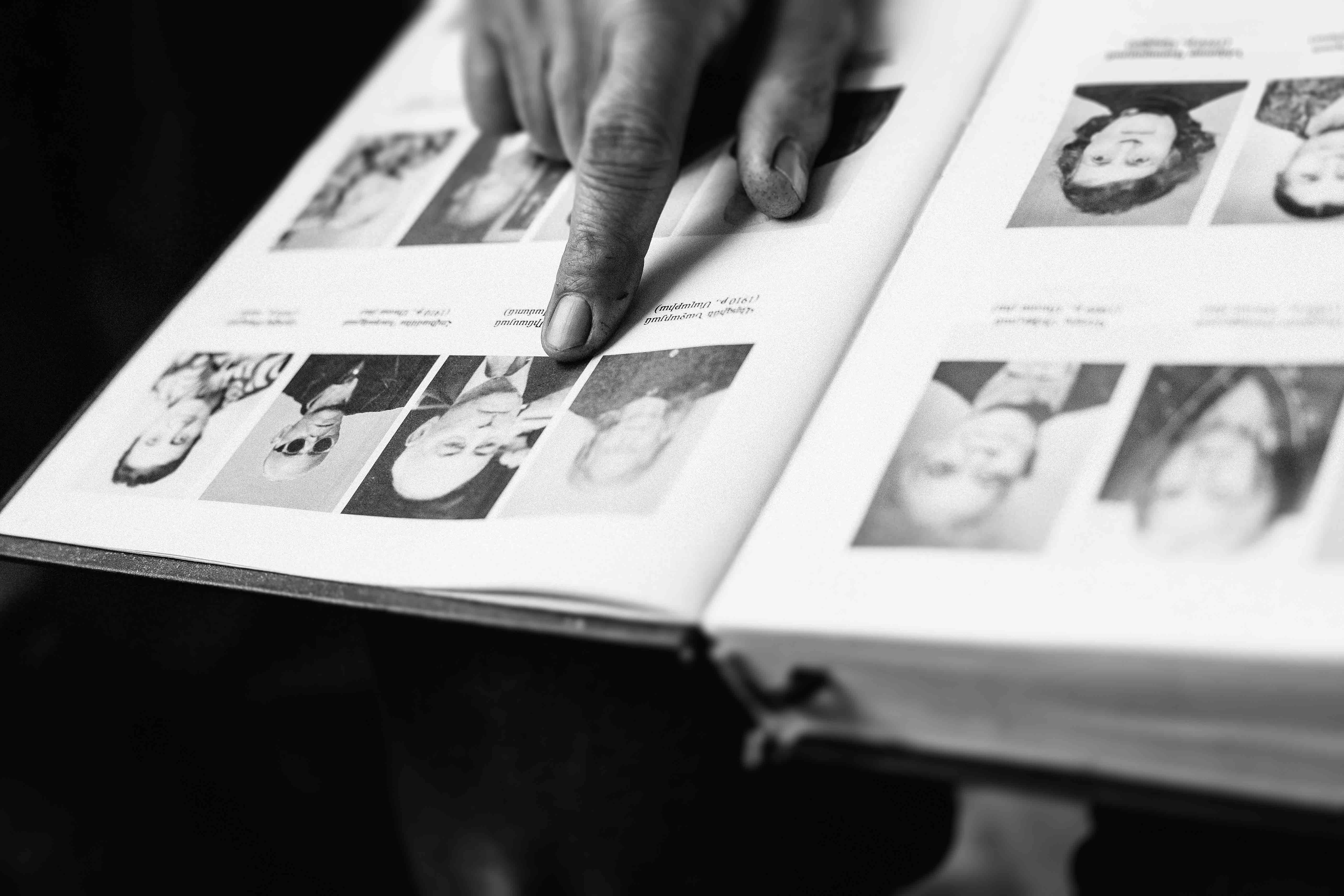 The driverʼs window is down, an elderly man sits in front of the steering wheel. He points us in the right direction, and we set off. The roads become bumpier, more isolated.

And then there it is, Anipemza. We slowly drive over  potholes the size of canyons, while children cheer at the car as we pass. To our left the flag of Armenia, on the right the Russian flag. The border to turkey has been closed since 1996, and the guards are Russian, not Turkish. I guess that says enough about this unsettled friendship already.

We stop at a random house, the border fence right next to it, to ask for advice. As we wait, I take photos of the electric fences, the baron landscape, and the border. A woman opens the door, and starts pointing into the distance.

All of a sudden an old Opel Vectra is thrashing down the broken road coming to a halt right next to us.

Two big guys dressed in military green walk up quickly to me. I don’t understand a word they’re saying, but then again, I probably did. We head back to the capital, I feel like I’m returning empty handed. 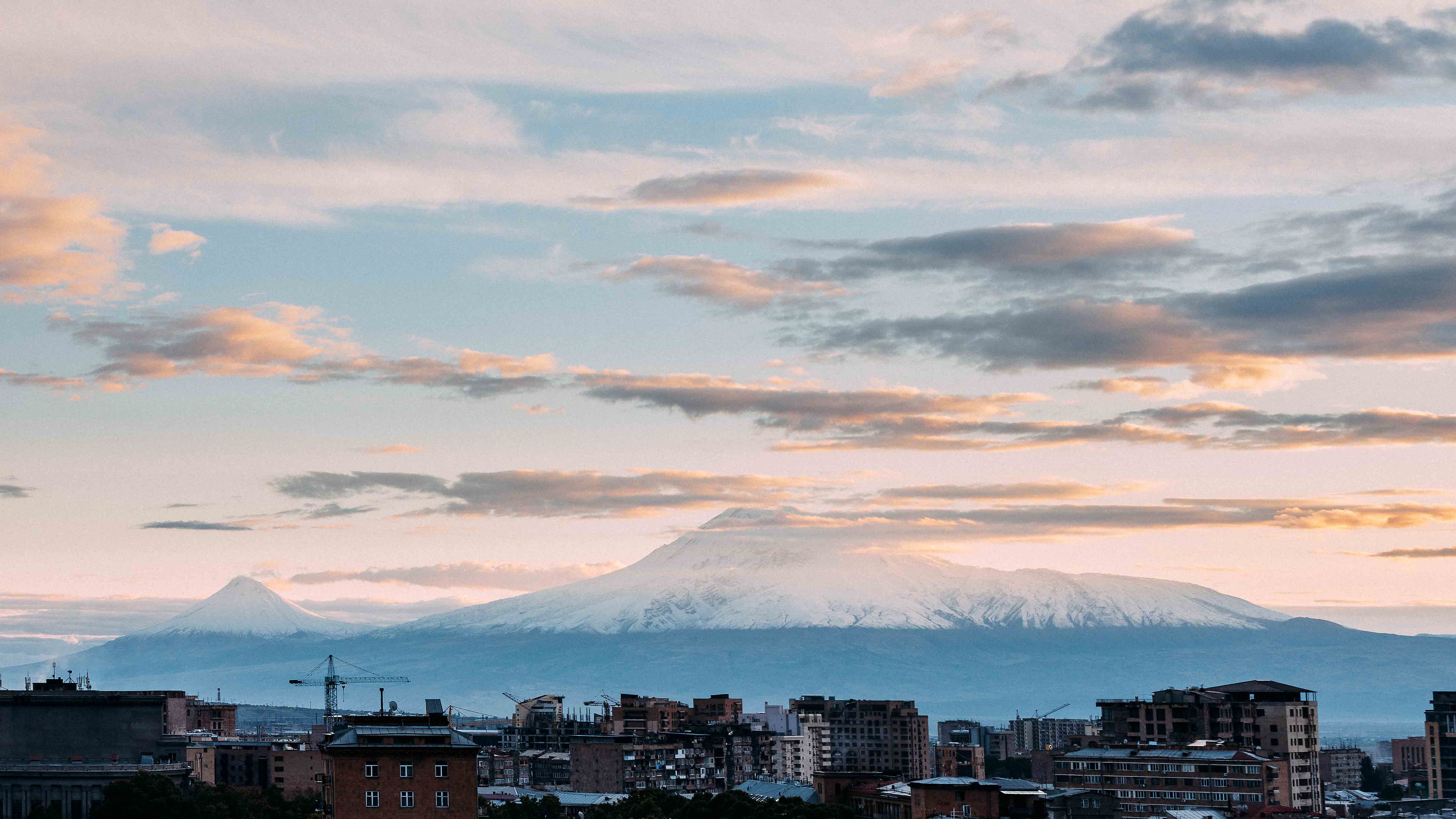 That night I stand looking at Mount Ararat. The Armenians lost a lot of land and treasures to the Turks, and one of them is this mountain. Even after all this time, Ararat is still in the hearts and minds of the people of Armenia. No Armenian has forgotten: Mount Ararat is still theirs.

Linkedin
RELATED ARTICLES
OTHER ARTICLES
Following the announcement of an 80% hike in the energy price cap from 1st October, crowds gathered outside the offices of energy regulator Ofgem to protest and declare their intention to undertake a payment strike.
Cindy Campbell recounts how her brother ushered in a new era of musical culture at a party she held in the Bronx in ‘70s.
Sean Maung’s photos are a love letter to the Black and brown communities that make up New York.
Financial turmoil is pushing people who work in the sex industry into more dangerous and desperate situations as a means of survival.
Yesterday thousands gathered outside Buckingham Palace after news of the Queen’s death broke.
Rogue landlords are exploiting young and inexperienced renters and leaving them in mental and financial turmoil, reports Niall Hignett.