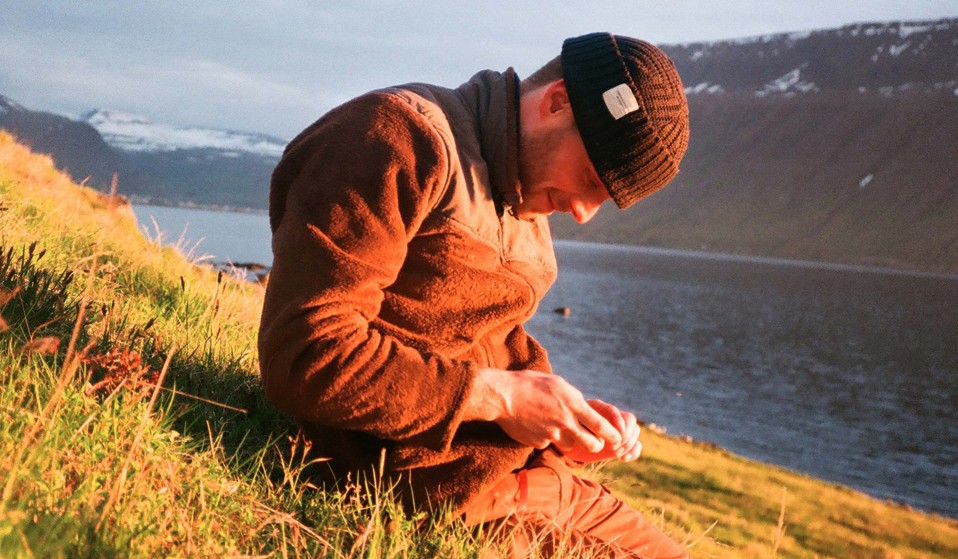 There's a sense of euphoria that comes from cycling down an open road that is impossible to put into words. Artist Steve Léon Brown found this out for himself in Iceland, where he spent 31 days and nights in the enchanting mountainous countryside, capturing the journey on a point and shoot camera.

There's a sense of euphoria that comes from cycling down an open road that is impossible to put into words. Artist Steve Léon Brown found this out for himself in Iceland, where he spent 31 days and nights in the enchanting mountainous countryside, capturing the journey on a point and shoot camera.

Feral Fjords is a touch on simplicity, journey, freedom and satisfaction. The series is a documentation of a month journey around Iceland on bicycles. The journey was to focus on being temporarily free from the modern pressures of society that has now become increasingly unavoidable. Without such restrictions we were free to appreciate the notion of time and travel at leisure, experiencing Iceland in it’s rawest form.

It’s a journey of friendship, patience and endurance, living outdoors for 31 days. By travelling in this way we were able to camp wild, fish, replenish water from glacial rivers, bathe in natural hot springs, be in direct contact with Iceland’s irrational climate, enduring cold, wind, rain but also the magic of the endless midnight sun.

Arriving in Reykjavik day one we were already wet, cold and with wind burnt faces. We had only made the short distance from Keflavik Airport to Reykjavik central, and by choosing to wild camp and not reside in the comfort of fully equipped camp sites we found ourselves spending the night in the overgrowth of a nursery school playground, thinking to ourselves surely there’s more to Iceland than this.

Having left behind dreary and cold Reykjavik, we found what we were looking for in the form of the very remote Western Fjords. Although the mighty 24-hour sun had made its appearance, so too did two mountain passes, gravel roads and a high mountain plateau.

The Arctic wind blasted us, our numb hands and numb feet struggling to remain sane and in control of the bike. It must have been written all over my face when a passing motorist stopped to hand me a banana for energy; I’m guessing I looked like I needed it. Bjork’s greatest hits just wasn’t enough to get me over this icy plateau.

Akureyri, Iceland’s second largest city if you want to call it that, found us in a similar situation as Reykjavik two weeks previously. Arriving late in the night tired and lost, we had a unanimous decision to spend the night in the display shed outside the front of the local garden centre.

After an agitated sleep with the fear of being disturbed in the morning by an Icelandic customer coming in to inspect us, we were up and off. But this time into a swarm of midges flying their way into every orifice of your face, there was more arm swinging than cycling going down at this point.

Cycling is quite possibly the most gratifying way to experience a landscape, but it’s also testing for the mind and body. It’s the only possible way to understand the trance like euphoria of cycling head on into Arctic winds over gravel mountain passes and plateaus, to be attacked by territorial sea birds, infested by swarms of midges, drowned by endless rain. It’s also the only way to experience the euphoria of cruising down long roads surrounded by fjords on either side, a steady tailwind pushing you all the way.

Linkedin
RELATED ARTICLES
OTHER ARTICLES
After rewriting the indie rulebook with her devastating songs about romantic longing, the singer-songwriter is now imagining a future in which the artist is no longer a product.
As the Criminal Bar Association enters its fifth week of action, criminal barrister Russel Fraser explains why the legal professionals have walked out and how action is likely to escalate.
From the chip shops, to the bingo parlors and burlesque dancers, photographer Mike Coles remembers capturing scenes of holidaymakers by the English coast.
With the UK now set to run out of vaccines, people working in the sex industry – particularly outside of major cities – have been left especially vulnerable, reports Brit Dawson.
With the virus now a global health emergency, we must take steps to fight misinformation and demand a swift UK-wide vaccine roll out, writes Phil Samba.
Photojournalist Fiora Garenzi spoke with people still living in Eastern Ukraine, an area which seen some of the heaviest fighting since the war began.