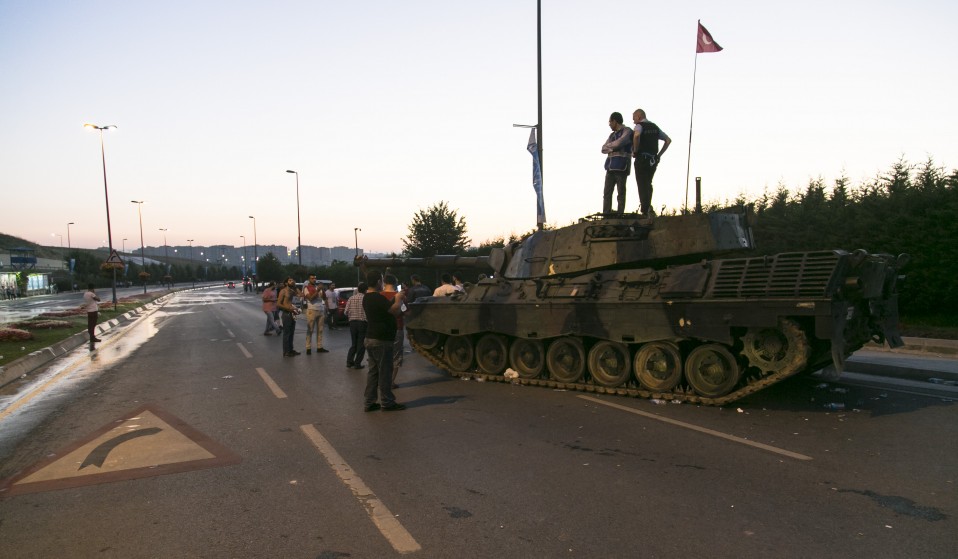 Just one week ago, a coup hit the streets of Turkey, blood was shed as a sect of the military attempted to take control. The coup was a failure, the country united to say no, but Turkish author and journalist Ece Temelkuran talks of the terror felt on the ground on the night, and her fears for the future.

Just one week ago, a coup hit the streets of Turkey, blood was shed as a sect of the military attempted to take control. The coup was a failure, the country united to say no, but Turkish author and journalist Ece Temelkuran talks of the terror felt on the ground on the night, and her fears for the future.

Just one week ago, further instability looked once again set to hit the Middle East. As night set in in Istanbul, a coup was stirring, thousands of soldiers looked set to take the streets and overthrow the Government. The world watched on as jets flew up above, reports of the Turkish Parliament being bombed pop up on our screens.

By morning it looked as of the coup had failed, a country came together to defend democracy – regardless of whether they supported the incumbent government. In the aftermath a state of emergency has been declared, providing greater powers to President Erdogan, allowing him to bypass Parliament and suspend parts of the European Convention on Human Rights. Thousands of people have been detained, hundreds of university deans asked to resign, talk of the death penalty is rife.

“The government have rounded up thousands of people and detained them in lengthy pre-charge dentition, many in irregular detention centres,” Lama Fakih, Amnesty International’s Senior Crisis Researcher, told Huck. “They’ve been denied access to family and lawyers – all these actions undermine human rights.”

“It’s exceptional, it’s alarming, and we are urging the government to respect human rights and their obligations.”

Keeping track of the situation is tough, but Turkish author and journalist Ece Temelkuran knows the political climate in the country better than most. Talking to us from Istanbul, she talks of the terror felt on the night of the coup.

What was the political climate like in Turkey in the build up to the coup?
If it would be one word to describe it, it would be “worn out”. Turkey has been the target of several massive terror attacks during the last year. I always thought “traumatised” as being too shi-shi for us, you know, a word that only upscale nations who have the luxury of being traumatised are using to describe the mood. The societies in this part of the world are too sarcastic to use such concepts.

But then I can say that Turkey had been already quite traumatised by the attacks coming one after another, mostly from ISIS. So when the coup attempt started taking place people, like they have done for several years, started creating enormous amounts of bitter jokes. This is now the way to survive trauma, especially for young people.

However when the jets started breaking the windows and it was understood that this is a real coup attempt, jokes were no more. During a single night, people learned how to differentiate between real bombs and sonic-boombs caused by sound speed of jets. The barbarity of the coup generals, and the savagery of attack on civilians were to revealed the following day to shock even those who already experienced two coups in 1960 and 1980.

How deep rooted are the problems that have led to the recent instability?
It all goes back to 1980 military coup. This might sound boring or rather too complicated for another country’s audience, but if I roughly summarise, it was altogether very much like Game of Thrones: a history of revenge.

Nowadays the popular joke on Twitter in Turkey is this, “If you didn’t find last season of GOT juicy enough check out Turkish politics.” And I add, if you think GOT is not complicated enough you should read about Turkish politics too. It is a story about the Cold War, Islamists being used as weapons against the evils of communism during the 50s, 60s, 70s and 80s, and then by the 90s ending up to be strong enough to establish an international economic web, meanwhile taking over all the fundamental institutions of a secular country, in our case Turkey.

The Gulen movement, which you will be hearing a lot about in coming months, is this. It did not only invade Turkey, but also through its hundreds of schools has spread over the planet. There have been serious warnings about the movement and they were never taken seriously.

What is your understanding of the motives behind the coup?
The sect, the movement, the Gulenists whatever you call it, are a very secretive entity. If you are not part of them you cannot really know what their goals are. However it is extremely important to emphasise that there are thousands of people who interact with the sect just because they are too poor to provide their kids with education and send their children to the Gulen schools.

So one should not picture the Gulen supporters as categorically evil, but it is the idea behind it. On the other hand, watching the barbaric, savage acts of generals during the coup attempt, one starts thinking that they were crazy kamikazes who were more than ready to burn down the entire country. One thing needs clarification here: I have been seeing this conspiracy scenarios on international media about this coup being a staged act orchestrated by Erdogan. Being a long time critic of this political movement, I can assure you that it was not. It was real.

What is the role for civil society, social movements and politically engaged young people internationally over the next days and weeks?
A few days after the coup attempt the state of emergency has been declared. Therefore I guess the international community should be in solidarity with Turkey and its people. These are really hard times. Extremely difficult times for all of us.

How did young people in Turkey help thwart the coup?
They were on the streets trying to stop the tanks with their bare hands. I am not saying this to dramatise the already bloody picture. It was real and it was almost incredible to witness it. The amy has a long history of cruelty in this country so the courage of civilians was spectacular. The old men were walking against the shooting soldiers, dying on the spot.

How will all this affect young people?
I cannot predict that but hopefully the young ones will remember how their people stopped a coup. Other than that I guess we are now all addicted to adrenalin and cannot wait for those days to come when we post boring selfies on Instagram.

The popular response to the coup – even by those who oppose the current government – seemed to be one of outrage. It might have been in the name of democracy, but does this set opposition parties back?
This is the most important question to me at the moment. You see, this is an extremely polarised country in many ways. It is a country where almost everybody hates everybody. There is a long history of this. But then on the bloody night nobody supported this act of barbarity. Everyone, be it by going on the streets, or writing on social media doomed the coup and stood for democracy. This I guess is a very precious consensus for my country to start a new chapter in her history. Hopefully Turkey will appreciate this opportunity.

Ece Temelkuran is the author of Turkey: The Insane and the Melancholy, published by Zed Books in September 2016.

Linkedin
RELATED ARTICLES
OTHER ARTICLES
Activists and campaigners are fighting back against new laws that would seriously undermine the ability to take industrial action, calling it an attack on fundamental workers' rights.
A new exhibitions brings together the work of photographers who documented the deep unrest of these pivotal decades.
Filmmaker Laura Poitras discusses her new documentary which traces the remarkable life of the artist-activist and the impact of her battle against the US opioid crisis.
Tristan O’Neill’s shots of dancers caught in moments of reverie at the height of rave’s golden age are a testament to the UK’s legendary club culture.
Since 2007, Gideon Mendel has made 20 trips to document floods in 13 countries. The result is an alarming record of what has already been lost to the climate emergency.
AI companies that develop image-generators using copyrighted artwork from the internet are coming under fire from artists who say that it amounts to theft.