News & Politics / The UK’s next Prime Minister will be a woman, but this is no victory for feminism 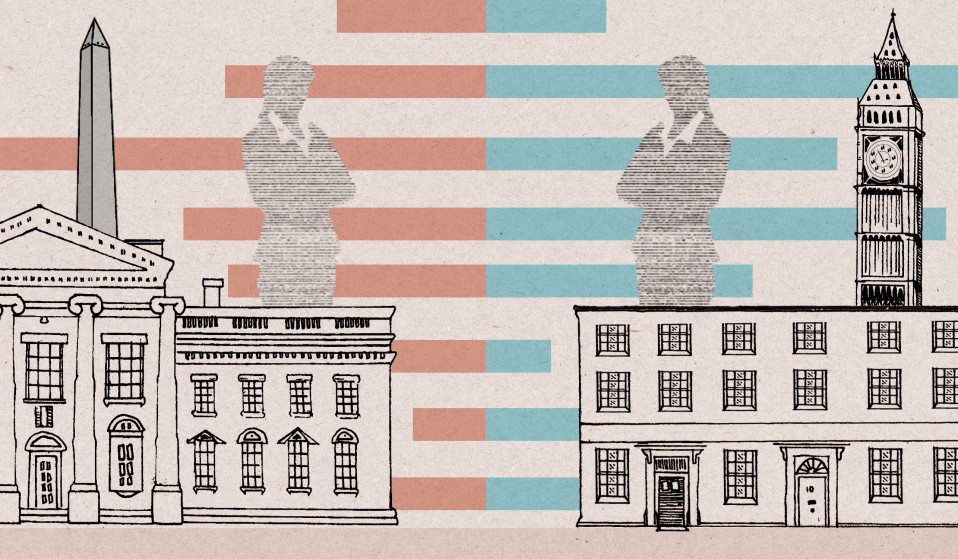 In just a matter of months, there may well be women in the highest positions of public office on both sides of the Atlantic. But let's be clear, being a woman doesn't make you a progressive feminist, if your policies leave other women behind.

In just a matter of months, there may well be women in the highest positions of public office on both sides of the Atlantic. Clinton's Presidential campaign looks set for victory, and the new Conservative Party leader in Britain will definitely be a woman too. But let's be clear, being a woman doesn't make you a progressive feminist, if your policies leave other women behind.

Here in the United Kingdom, it’s now certain our next Prime Minister will be a woman. The problem is, it’ll be a woman who’s made life harder for other women, and yet this will almost certainly be celebrated as a win for feminism.

This is the warped logic we can expect to develop over the coming months now that Theresa May and Andrea Leadsom have been announced as the two candidates in the Tory leadership race, the winner going on to become PM.

It’s what we witnessed across the pond when Hillary Clinton was named the presumptive Democratic candidate. Many claimed her candidacy as a victory for women, and the same will be true if she manages to beat Donald Trump in the race to the White House. But there is nothing inherently feminist about a woman leader just because of her gender.

This idea itself speaks to gender stereotypes: it presumes that women are automatically more likely to do good for “their own kind”. This thinking springs from the same reasoning that women are natural peacekeepers who should be sent in to put out the fires lit by male politicians (think Boris Johnson and David Cameron, the architects of the referendum and its result, notably absent in Brexit Britain). 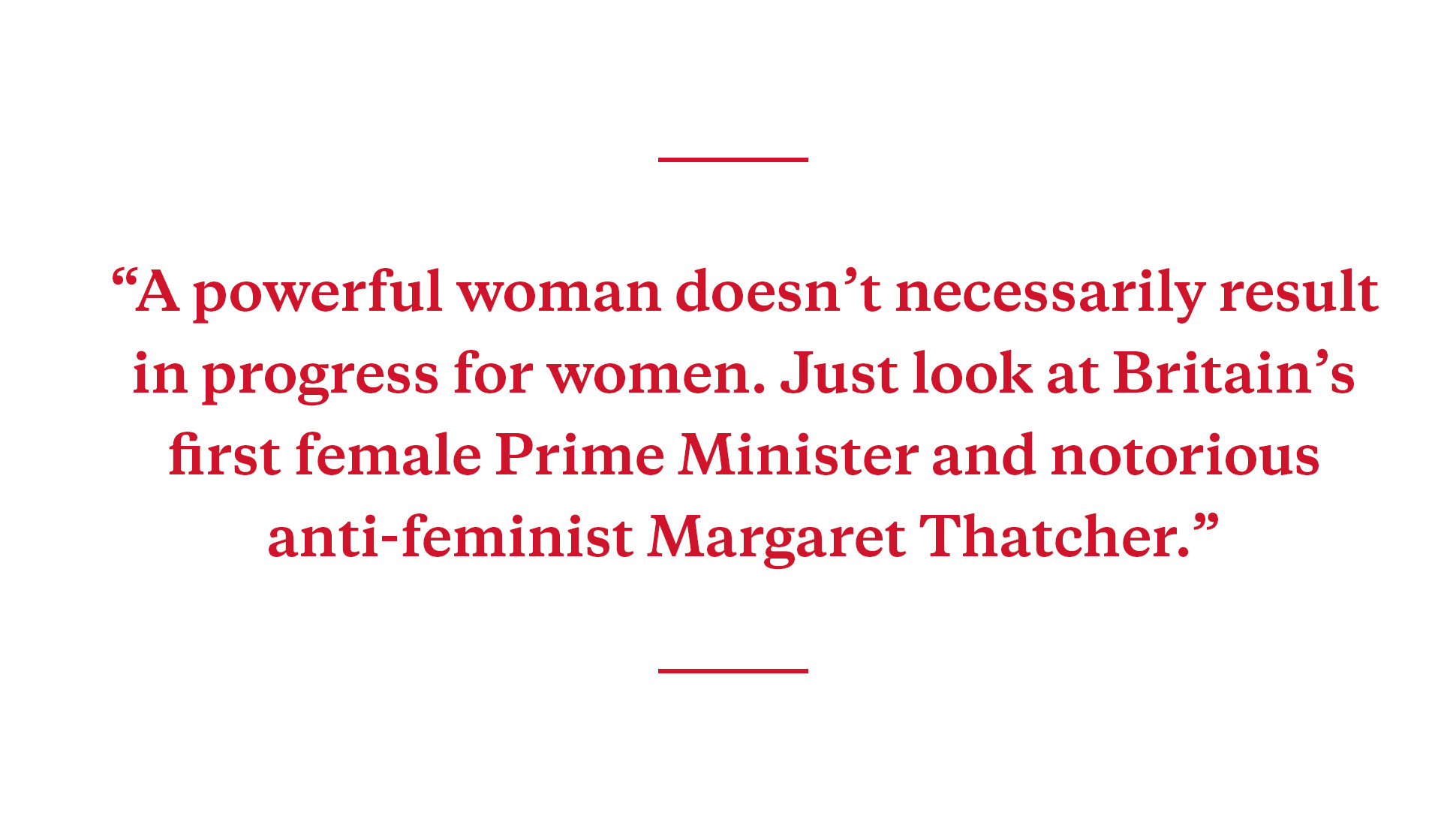 Let’s get this straight: women are not naturally anything. Yes, we are socialised to act certain ways, but we aren’t born conciliatory creatures. The same is true of leadership: a powerful woman doesn’t necessarily result in progress for women. You just need to look as far as Britain’s first female Prime Minister and notorious anti-feminist Margaret Thatcher.

In fact, some of the men in our political sphere are likely to be more progressive than May, Leadsom or Clinton. Both Democratic candidate Bernie Sanders and Labour leader Jeremy Corbyn advocate for policies that would improve women’s lives by changing the way society, and in the incredibly unequal system of global capitalism, works.

Diverging from Clinton’s corporate feminism, Sanders’ campaign to tackle corruption – which affects women the most – and his pledge to unapologetically implement a $15 minimum wage would undoubtedly benefit women.

Similarly, Corbyn’s fervent anti-austerity politics would do better by women than maintaining the fiscally conservative status quo: after all, it’s women who usually suffer the most in an unfair economy.  We live in a world structured to discriminate against women. Sanders and Corbyn want a system shift; May, Leadsom and Clinton only want to tinker at its edges.

Take a little look at May and Leadsom’s records and you’ll see they haven’t exactly made life better for women. In her time as Home Secretary May has overseen what’s been called “state sponsored abuse of women” at the infamously horrific immigration detention centre, Yarl’s Wood.

Guards at the quasi-prison were found to be hurling racist abuse at inmates, allegedly abusing and raping women left under their care. Amid these claims, May chose to extend the contract for security company – Serco – to run the centre. “I am not free while any woman is unfree”, wrote feminist Audre Lorde, “even when her shackles are very different from my own.” If only the Tory government agreed with this sentiment.

May and Leadsom have helped craft, or at the very least loyally supported, a government that’s made a political choice to roll out deep austerity cuts that have affected women – and in particular women of colour – the most. They’ve actively voted for an economic plan that’s slashed budgets for domestic violence services, which are vital lifelines for so many women. Due to their decisions increasing numbers of women’s refuges have closed their doors, while others have been unable to meet demands, and crucial services for women of colour have been financially sidelined. Desperate women have, quite literally, been abandoned by the state.

Feminism isn’t just about women’s rights; equality between genders and people of different sexualities is at the core of feminist ideas. Whoever is our next PM, they have a poor record on LGBT rights. May has forced LGBT asylum seekers to “prove” their sexuality and Leadsom has openly admitted she doesn’t approve of gay marriage law. Progressive? I think not.

It’s possible to recognise that all of this is true and still accept that women politicians are subjected to unjustifiable gendered scrutiny. May and Leadsom might not pursue feminist policies but they are still the victims of sexism; just four months ago the right-wing papers thought it appropriate to focus on the Home Secretary’s cleavage. Their damning and divisive political choices should be held up for criticism but the fact that they’re women shouldn’t be brought into the equation.

The myth is that the more women you get into position of power the closer you are to gender equality. But much like money, equality is not a trickle down process.

Of course we need more women in public life. Even once we have another woman PM or the U.S.’s first woman President, we’ll still have a parliament dominated by men – with women of colour significantly underrepresented. Institutional sexism, like institutional racism, is ingrained in our society, in our workplaces and in our Parliament. There are hard questions to ask about why people – including those on the left – are more comfortable with white, male leaders.

Leaders who pursue economically destructive policies, imprison and largely ignore the plight of foreign-born women of colour and seek to maintain a system that discriminates against women will not help further the feminist cause simply because they are a woman.  Now, if we are forced to have a new Conservative PM elected by just 150,000 Tory party members and hell-bent on continuing to stoke deep divides in British society, it’s not somehow better that it’ll be a white woman and not a man. But it’s certainly no victory for feminism.

Maya Goodfellow is a writer and researcher, her work focuses mostly on politics, gender and race.  Follow her on Twitter.

Linkedin
RELATED ARTICLES
OTHER ARTICLES
Our new magazine is here, starring the inimitable Mitski. Order your copy now and join us on a trip around the world.
To mark the anniversary of the mass trespass of Kinder Scout, a group of hikers came together with the intent of creating a new, fully inclusive culture for rural spaces.
Government plans to make it harder for people to go to university will only entrench inequality.
The government’s failure to take long Covid seriously has led to the formation of a group campaigning for the thousands of forgotten victims of the illness.
The failure to hold landlords to account is denying tenants their basic dignity, writes Bella Saltiel.
Photographer Robin Graubard’s debut book offers an unflinching record of turbulence and change across the Balkans.