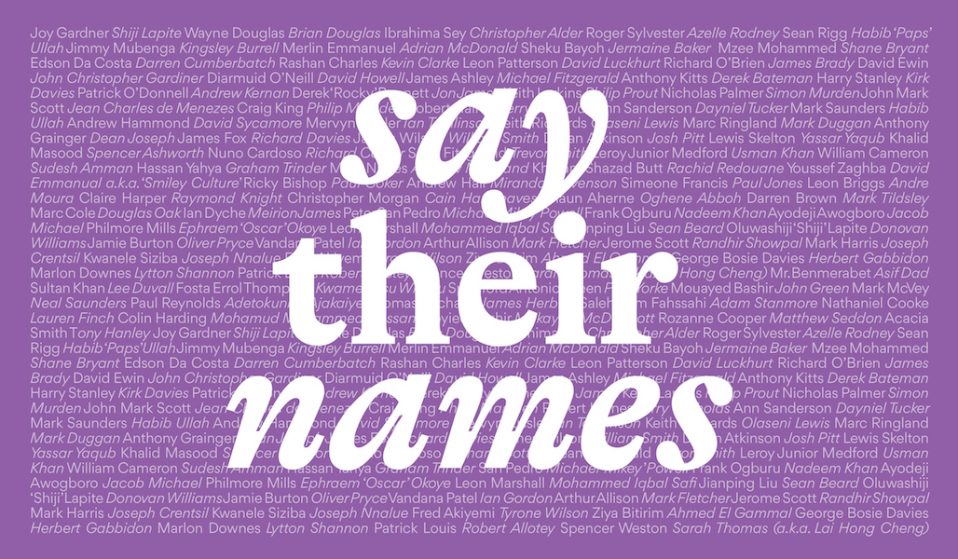 Our new series looks to uncover the stories behind the staggering number of deaths in police custody or following contact with the police.

In the last 31 years, 1796 people have died in police custody or following contact with the police. Say Their Names is a new series, guest edited by Micha Frazer-Carroll, uncovering the stories and struggles for justice behind these devastating statistics.

On 5 October 1985, the police raided the home of a 49-year-old Jamaican woman named Cynthia Jarrett near the Broadwater housing estate in Tottenham. Her son, Floyd, was being held in custody due to an altercation over an inaccurately made-out tax disc. During the raid, Jarrett became distressed, collapsed and suffered a heart attack – although her daughter has always maintained that she saw a police officer push her to the ground as they entered (a claim the Metropolitan Police subsequently denied). 26 years before the death of Mark Duggan, and in the very same town, Jarrett’s death sparked what is now known as the Broadwater Farm uprising. But none of this was completely unusual in late 1980s and early 1990s London. Only a week prior, another Caribbean woman, Cherry Groce, was shot by the police, catalysing the Brixton uprising.

This was the social context in which a group of family campaigners and UK activists embarked on an unprecedented mission: to start recording deaths during, or shortly following, contact with the police. Before the group embarked on this project in 1990, there was no real means of recording deaths in police custody. The list of deaths never stopped unfurling; the database has now been taken on by the charity Inquest, and is the most comprehensive record of deaths in police custody or following contact with the police in England and Wales.

The number now stands at 1796 people who have died in England and Wales since 1990. It’s a shocking figure, but unfortunately one that many of us are familiar with in some shape or form. But the deeper complexities that lurk behind this number are often left out of the picture. There are  stories that have scarcely scraped headlines, or took place long enough ago that they are in danger of fading from our collective memory. This sense of urgency, and the desire to keep the archive alive, inspired our series title: Say Their Names.

From each of these historical cases, and from Inquest’s statistics today, it is clear that while most police don’t carry guns in the UK, police violence does occur here under a variety of guises. It’s also evident that your experience of policing will manifest in different ways depending on your age, how you are racialised, where you live, your class or immigration status, your gender, or whether you are disabled.

The more we researched for the series’ collection of eight articles, the more we were reminded that the police forces we interacted with, unsurprisingly, did not share our goals. During the course of data collection, we contacted 49 UK police forces with requests for data under the Freedom of Information Act. We asked for information about deaths that had happened in Police Custody or following contact with the Police from 1990 to the date the FOI was sent, as well as breakdowns of the data and any disciplinary action taken against officers involved with the deaths.

At the time of publishing we’d received 27 responses. Three forces, Devon and Cornwall, Dorset, and Derbyshire provided full responses. Four, Police Scotland, Cambridgeshire, Hertfordshire, and Lancashire provided partial details. Two forces, West Midlands and the London Metropolitan Police, had yet to make a decision on whether they would provide the information requested.

The overwhelming majority, 18 forces, rejected the request, mostly under exemptions within the FOI act which limit the amount of work legally required of public bodies to fulfil requests. In the vast majority of the cases, most forces stated they simply did not know how many people had been killed by their officers during the 31 year period queried, and finding out the information would take weeks of work.

So we investigated elsewhere, and came away with some of our own findings. Huck’s analysis of records held by the Independent Office for Police Conduct has found that since 2004 (the year that the IOPC was established), 37 per cent of people fatally shot by the police in England and Wales were from Black, Asian and Minority Ethnic (‘BME’) backgrounds. 19 per cent of all those fatally shot were Black, as were 7.3 per cent of those who died in or following police custody – despite Black people making up just 3.4 per cent of the population, meaning Black people are twice as likely to die in police custody or following contact with the police than their white counterparts. This supports existing evidence, which shows that police in England and Wales disproportionately use restraint, Tasers and other types of force on Black people.

Mental health is also a theme that crops up again and again in the data. For the years where IOPC data is available for mental health (2010/11-2019/2020), Huck can reveal that just under half of deaths in or following police custody involved people with “known mental health concerns” with one in 10 of those deaths representing someone who had been sectioned under the Mental Health Act 1983, a piece of legislation that gives authorities the power to involuntarily detain and treat people with mental health problems.

Some of the most well-known police custody deaths involved inadequate responses to people with these diagnoses who were experiencing distress – like former Aston Villa footballer Dalian Atkinson, who was kicked and tasered to death while in the midst of a psychotic episode in 2016. This summer, Atkinson’s case became the first to see a serving police officer convicted of manslaughter in the course of their duties in 30 years.

We found that location can also influence a person’s likelihood of dying during or following police custody. It’s widely understood that the Met are involved in a large number of police custody deaths – over one  in four between 1990 and today. Considering the population of London compared to the rest of the country, this makes Londoners twice as likely to die in or following police custody. Although the Met operates in the most ethnically diverse city in England and Wales, the 1999 Macpherson report that followed the death of Stephen Lawrence famously concluded that the force is institutionally racist. The current stats suggest that that statement still stands; between 1990 and today, the Met are responsible for more BME custody and shooting deaths than every other constabulary in the country combined.

Of course, police violence and negligence is by no means limited to the capital, or the countries’ most populated cities. Of 43 territorial forces in England and Wales, government reviews show that Cheshire has the highest rate of police custody deaths proportional to population, at approximately one per million per year (according to data collected between 2004-16). The second highest during this time period was neighbouring North Wales. The reasons for this are inconclusive, but it’s notable that both forces have a relatively high proportion of police when population size is taken into account (with the Met ranking the highest number of police per 100,000 population). North Wales is also one of the only constabularies to issue lower-ranking Police Community Support Officers with handcuffs – which are a form of restraint.

In the period since 1990, police tactics have also changed. One key development is the introduction of Taser stun guns, which the Home Office brought in in 2003 and began rolling out to non-specialist officers in 2008. Since their introduction, at least 20 people have died after being Tasered by the police – like 30-year-old Marc Cole, a Falmouth man who was tasered for 43 seconds in the midst of a mental health crisis in April 2020. Taser use has steadily increased year on year, and reached an all-time high in 2019-20, with forces’ self-reported data showing that Tasers were used in around 32,000 incidents and discharged in at least 3,300. In this time period, Black people were subject to Taser use at a rate eight times higher than white people, and around 2,800 cases involved children. Despite this, the government announced in 2019 that it would spend £10m on arming more officers with electric stun guns, to the outrage of human rights groups and many police chiefs. The Met will receive almost one fifth of the funding.

Although Say Their Names will unearth cases of police violence and negligence over a 30-year period, there is a notable circularity in the stories we explore. Most of the victims are men of colour. Whether mentally or physically ill, many were at their most vulnerable when they died – for example Philmore Mills, a Black 57-year-old man with lung cancer and pneumonia, who died after being taken to the ground and restrained in hospital in 2011. Then there is the lack of accountability and transparency that routinely blocks families’ pursuit of justice. In the case of Mohamud Hassan, who died in custody in Cardiff last year, the 24 year old’s cause of death, and the events that took place in the police station where he was detained, are still unknown.

The stats support the idea that – despite reams of reviews and reports on police custody deaths, and rising publicity around police violence – the violence itself has not really changed in recent years. As Inquest Director Deborah Coles pointed out in 2020, the number of deaths in custody remains the same as a decade ago, when Mark Duggan’s fatal shooting sparked the largest civil unrest of a generation. Even more worrying is the fact that policing is gaining in resource and power; as well as pouring funding into weapons like Tasers, the government has pledged to recruit 20,000 additional police officers by 2023. Meanwhile, the ongoing Police, Crime, Sentencing and Courts Bill seeks to implement a sweeping expansion of police powers, which are ripe for abuse.

This is why – over a year on from the UK’s seismic Black Lives Matter demonstrations, and as even Cynthia Jarrett’s family along with others continue to wait for justice – we want to ensure victims’ stories continue to live on. If the government and police opt for historical amnesia, then memory is a tool of resistance. Today, and tomorrow, we must never stop saying their names.

Linkedin
RELATED ARTICLES
OTHER ARTICLES
Campaigners reflect on what the supreme court’s decision to allow buffer zones in NI means for the future of reproductive rights in the UK.
From snake handlers to mardi-gras revellers, Tom “TBow” Bowden’s photos provide a snapshot of the wonderful and weird people who make up America.
After blocking the Scottish government’s gender recognition reform bill, Westminster is now devising further changes to the law to make it harder for trans people to self-identify.
Mass crustacean die-offs in the North East have led a community of fishermen to take action to save their seas.
Taking us through one of the most dynamic years in recent history, Laylah Amatullah Barrayn new photo book contains tender yet confrontational portraits.
Photographer Sean Maung reflects on documenting a small town in Pennsylvania afflicted by high levels of unemployment, poverty, violence, crime, and addiction.