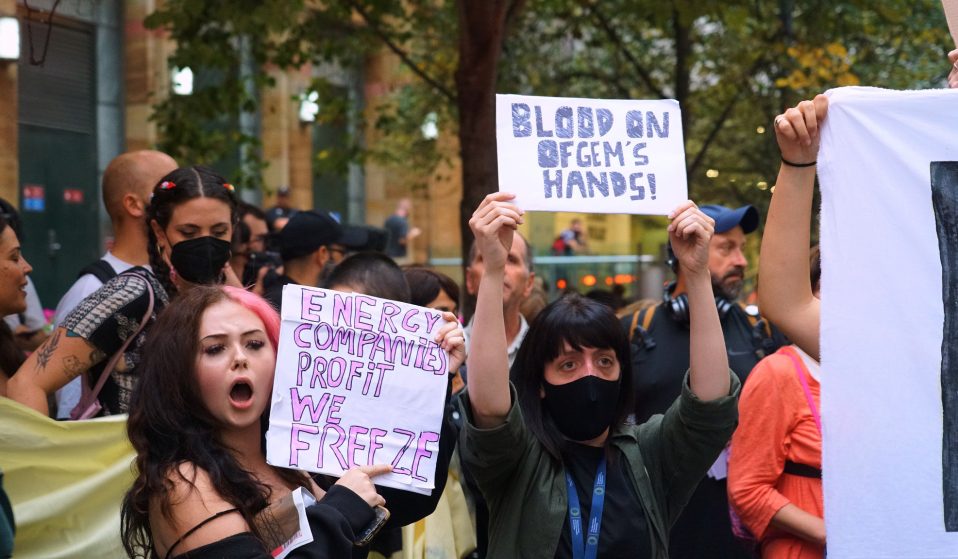 As a historic hike in energy prices is set to force misery on millions this winter we must pledge to fight back.

As a historic hike in energy prices is set to force misery on millions this winter we must pledge to fight back, Don't Pay UK member Franklin Dawson writes.

In the borough of Lewisham where I both live and campaign with my local Don’t Pay group, the “We Care Food Bank”, the largest of its kind in Britain, now faces an uncertain future  — all while demand skyrockets. From an initial 30 households seeking support when the Food Bank opened just years ago, now 5,000 households are reliant on its services, a number which is predicted to hit heights of 20,000 this winter.

Self-described as “the last frontline” against mass destitution in the community, the food bank has become an institution which overstretched and threadbare state services including the neighbouring Lewisham hospital relied upon to prop up their ailing care-giving capacity. Now, as energy bills render refrigeration costs increasingly unaffordable, this final frontier against deprivation is itself crumbling.

The truth is, we can’t wait for someone to swoop in and save us from the cold this winter. Working together under the banner of Don’t Pay UK, we’ve forced a concession, but the crisis is far from over.

In just a few months, almost 200,000 people joined up to say they just wouldn’t pay in protest at the extortionate energy prices we’re facing this winter. Let’s be clear: the threat of coordinated mass non-payment forced Liz Truss to intervene and introduce her ‘Energy Price Guarantee’.

A new Prime Minister, ideologically opposed to state intervention, signed a blank cheque to limit the devastating 80% price hike we faced on 1 October. But it’s abundantly clear this intervention doesn’t go nearly far enough: it’s a guarantee that many millions of us will go cold in our homes this winter.

The supposed freeze on energy prices is a misnomer in itself. It’s neither a cap on energy bills nor a true freeze on the price we pay for gas and electricity. In short, this cap is all cap.

The £2,500 figure cited isn’t a limit on the maximum amount a household will pay but merely refers to an average calculated on new, increased per unit energy prices based on typical use for a three bedroom house. Your energy bill can and will go much higher than the advertised figure — especially if you live in a household with more people or have greater heating needs. Yet again, the hardest off pay the highest price.

It’s up to all of us to fight back.

Before the cost of living crisis, the UK already suffered some of the highest rates of excess winter mortality in Europe. Tens of thousands freeze in their homes every winter, unable to afford to put the heating on. This winter, we remain exposed to the unconscionable consequences of sky-high, unaffordable energy prices through no fault of our own. We are the ones left to bear the brunt of an energy crisis unleashed by private energy market failures and corporate greed.

Now, even at its mitigated level, the heightened price cap threatens to unleash a social catastrophe of epic proportions this winter. The charity National Energy Action predicts a more than 50% increase in fuel poverty with almost a quarter of all UK households now at risk.

This is set against the backdrop of converging crises. From vastly inflated food costs exacerbated by a plummeting pound, falling real wages and now a deluge of mortgage defaults as interest rates are hiked to offset Tory-induced market mayhem, we’re being squeezed from every angle. Millions of us already live in a default state of precarity — another energy bill rise will push many of us off the precipice.

At the centre of it all is profit. Rampant profiteering. £170 billion in excess and unearned profits set to be sequestered by the energy companies over the next two years alone. By refusing an expanded windfall tax on these vast sums, the “energy price guarantee” amounts to a blank-cheque to business — and comes with an obstinate refusal to tie this increase in public spending to even the semblance of an industrial strategy.

This is despite ample evidence that private sector mismanagement of our energy supply, including a failure to invest in renewables or invest in insulating our housing stock, has left the UK exposed to inflationary pressures with a ferocity unparalleled amongst our European neighbours. Instead, these measures are being forced through for the resurrection of an undead agenda of trickle-down economics, thoroughly discredited and even now unanimously condemned by international economic institutions and trading partners, from the IMF to Joe Biden.

While the Truss administration may hold us — the public — in total contempt, Don’t Pay refuses to take this lying down. The ever-deepening chaos of governance Britain faces evidently underlines just how vital collective action is. Faced with the cold this winter, it’s up to all of us to build the structures we need in our communities to protect ourselves and each other, while building the strike – and our leverage – so we can fight back.

Mass non-payment strikes have worked before, and they will again. Pledge to strike, join your local Don’t Pay group and get out on the streets in your town or city for the nationwide day of action this Saturday, October 1st.

Find out more about Don’t Pay UK and join the strike.

Linkedin
OTHER ARTICLES
Max Miechowski reflects on documenting land that is being lost to the sea – and the people who live life on the edge.
A new exhibition is marking the photographer’s 100th birthday with a look back at his extraordinary career.
A new documentary tells the story of an unassuming cul-de-sac of 13 timber framed houses built by Fusions Jameen – London's first Black housing co-op.
A campaign seeking to prevent future injustices where there is state involvement is gaining momentum, with Labour recently pledging its support.
The photographer describes taking inspiration from Magnum photographers to craft an intimate and revealing portrait of the city.
The demonstration took place this week over plans to slash £50m from arts bodies in London.