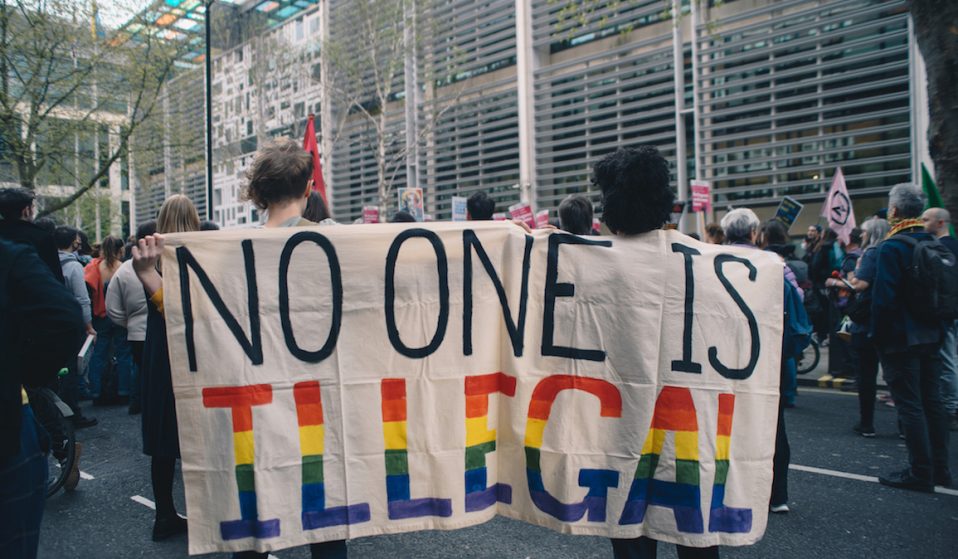 The government’s Rwanda deal will not include women and children. In doing so, it seeks to stoke fear of Black and Muslim men.

The government’s Rwanda deal will not include women and children. In doing so, it seeks to stoke fear of Black and Muslim men while splitting hairs between the most vulnerable, writes Tiara Ataii.

Last week, Home Secretary Priti Patel launched one of her most controversial immigration plans yet. To disincentivise refugees from crossing the English Channel, those who successfully navigate the perilous journey will be sent to Rwanda for offshore processing. In Rwanda, they will have the option to ‘integrate’ with a five-year residency permit, thereby relinquishing their asylum claim in the UK, or lodge a claim for asylum that will be processed in Rwanda. Subject to a successful claim, they may then be transferred back to the UK with refugee status.

The scheme has attracted widespread condemnation. The UN said that the plan is in breach of international law, the Archbishop of Canterbury that it is “against the judgement of God”, while the House of Lords has twice amended the Nationality and Borders Bill to block the possibility of offshore asylum processing.

Facing derision for a plan labelled ‘inhumane’ across the political spectrum, the government was forced to find a justification. Soon, they settled on a familiar target: single men seeking asylum. Prime Minister Boris Johnson defended the Rwanda offshore processing plans by arguing that single men are “taking up our capacity to help genuine women and child refugees”, whilst Simon Hart, Secretary of State for Wales, appeared on Sky News to insist that the vast majority of those sent to Rwanda would be men.

Stoking fear of Black and Muslim men is a trope that crops up in most white supremacist discourse – be that the lynching of Black men at the beginning of the 20th century by casting them as sexual predators seeking to ‘defile’ white women, or justifying the invasions of Iraq and Afghanistan on the basis that the women of said countries needed to be protected from the men among them.

In the context of refugees, this discourse has reared its ugly head once more. Pseudo-intellectual arguments stigmatising Black and Muslim men have become widespread, such as that of Valerie Hudson who argued that the presence of predominantly male refugees in Europe will destabilise the continent since societies with more men than women result in greater rates of violence.

In 2016, then-Secretary of State for exiting the European Union David Davis argued that the British public was being “taken for a free ride” by men “who seem to have got to the front of the queue even though they clearly look in some cases a lot older than 18”. This unleashed the government’s obsession with age assessments, which subject children and young people to months of legal limbo on nothing more than a visual assessment suggesting they are over 18 – another pillar of the Nationality and Borders Bill which has been ripped up by the Lords.

There is no basis in international human rights or refugee law for men seeking asylum to be subject to a different asylum regime than women, girls, and boys. In any case, men are often vulnerable and need protection. The theory of intersectionality reminds us that, of course, men too can have disabilities, can be persecuted due to their sexuality, can be labour trafficked, and can be the victims of gender-based violence – the list goes on. Assuming all men to be strong, mature, without the need for protection is just patriarchy by another name.

Contrary to Johnson’s argument that single men flee to Europe to “jump the queue”, there are logical reasons why there are a larger number of single men seeking asylum in Europe than other demographics. Boys and young men are often sent ahead to Europe, with the hope that they will receive asylum and bring over their families through family reunification later, thereby sparing them the perilous journey. Furthermore, in the context of war, men and boys are often subject to conscription, which can be the catalyst for them to flee.

And yet, this anti-Black and Muslim men rhetoric has become so entrenched that it is now being propagated in the charity sector. Pro-refugee campaigns have typically focused on the resettlement of unaccompanied minors. Though a laudable cause, unaccompanied minors often receive specific protections and services, and thereby single men – especially those who have only just turned 18 and have just lost all of their protections as a minor – can be made much more vulnerable as a result of their exclusion. On top of this, only speaking about unaccompanied minors means that the government’s logic that men are somehow “dangerous” or impossible to integrate goes unchallenged.

Ultimately, the exclusion of single men does not benefit women and girls either. Working in legal aid for refugees, I have seen countless cases where family members (mother, father, school-aged children) receive asylum, while one son over the age of 18 is rejected and faces deportation. The stress of potential family separation is felt just as keenly by their mothers and sisters.

In addition to this, single men with asylum in a host country are often a lifeline for family members back home. Women and girls can wait in limbo for years, unable to start a new life in safety, as family reunification pends on a successful asylum claim. When asylum claims take as long as five years, men are subjected to socio-economic disenfranchisement in the UK, unable to work until they have refugee status. This renders them unable to send remittances home – for asylum seekers from countries where remittances support as much as 40 per cent of the population, this can be a death sentence.

Rights aren’t a zero-sum game, and it would be deeply cynical of us who are campaigning for refugee rights to fight for some at the expense of others – after all, injustice anywhere is a threat to justice everywhere. What I have learnt from years of working in refugee rights is that advocating for the most sympathetic people to the British public (often women and girls) in the hope that we can slip more people through the door later doesn’t work – it just means that we legitimise affording rights based on the public’s appetite.

Linkedin
RELATED ARTICLES
OTHER ARTICLES
A new exhibition is marking the photographer’s 100th birthday with a look back at his extraordinary career.
As the cost of living crisis bites, letting go of treats to keep us going is proving difficult – but we should’t just blame ourselves for our financial worries.
Hackney Bumps is a DIY sanctuary in the heart of East London, home to a thriving diverse community of skateboarders – and beyond.
Layna, Maysa and Amaya are three siblings looking to disrupt narratives around the sport. In doing so, they’re hoping to inspire a new generation of skateboarders.
Photographer Jeffrey Silverthorne always treated his subjects – often those living on the margins of society – with empathy and respect.
Max Miechowski reflects on documenting land that is being lost to the sea – and the people who live life on the edge.