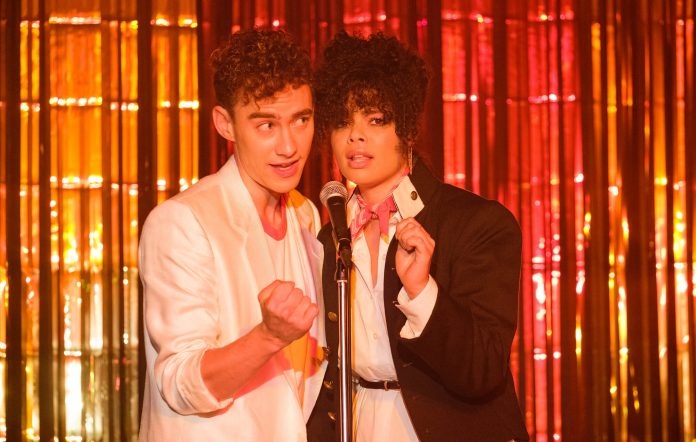 Photography © Still from It's A Sin, courtesy Channel 4

When AIDS emerged in the ‘80s, it presented the perfect opportunity for tabloids to stir public fears. Holding the media accountable will mean acknowledging their bigotry – both past and present.

When AIDS emerged in the ‘80s, it presented the perfect opportunity for tabloids to stir public fears. Holding the media accountable will mean acknowledging their bigotry – both past and present.

We know that life for openly gay and lesbian people in Britain, from the earliest quakes of queer liberation through to the present day, has been historically marred by hostility – be it from the public, the political establishment or, indeed, the tabloid press. Current pastures may seem greener, but for decades, queers were painted as public enemy number one: as threats to the nation’s children, destroyers of the family, and delinquents peddling sick perversions. The emergence of AIDS in the early ‘80s – a viral terror that blindsided the burgeoning gays’ and lesbians’ rights movements – presented the tabloids with the perfect opportunity to stir the fears of the public.

Two weeks ago, The Sun published an interview with Russell T. Davies, declaring his new show It’s A Sin, which covers the first decade of Britain’s AIDS epidemic, to be “one of the most hotly anticipated dramas of 2021,” noting that it was “rooted in a real-life story of tragedy”. The author, culture reporter Shannon Power, later writes that “Davies warned that the HIV pandemic was far from over and hoped It’s A Sin served as a reminder that stigma and discrimination still existed”.

Absent from Powers’ piece is recognition of the complicity, if not central role, of tabloids like The Sun in perpetuating said stigma and discrimination. The mask, nonetheless, would soon slip. On January 22, The Sun ran a headline declaring It’s A Sin viewers to be “shocked by [the] drama’s explicit sex montage,” a mere month after positive coverage of a sex scene from the heterosexual period drama Bridgerton.

So how exactly did The Sun and the myriad tabloids of its ilk report on AIDS? In Gay in the ‘80s, author Colin Clews noted that towards the end of his time working for the Terrence Higgins Trust as a phone line operator, calls about AIDS increased substantially, though infection rates had mostly stayed the same. “What had changed, however, was that AIDS – as ‘the Gay Plague,’ of course – had become the preoccupation of the mainstream press,” he wrote. “It appeared in front-page headlines on an almost daily basis and dominated much of the content on other pages, too.”

If the public didn’t know how hysterical to be about this ghoulish threat, or who should bear the brunt of the blame, the tabloids had them covered. “A Million Will Have AIDS in Six Years,” prophesied the Daily Mail in January 1985. “It’s Spreading Like Wildfire,” proclaimed The Sun the following month. “Cough Can Spread AIDS, Warns Doc” was The Sun’s chosen headline on 31 August, just two weeks after running with “Brutal Truth About AIDS: No One’s Safe”. If an environment of hostility didn’t already exist for AIDS victims, or indeed any of the demographics deemed plague-bearers by the body politic, the tabloids would be certain to create it.

In 1983, writer Terry Sanderson wrote a column for Gay Times – formerly Him magazine, and later Him/Gay Times – called Mediawatch, reporting on press coverage of gay issues. It ran for almost 25 years. Echoing Clews’ assessment on his website, he wrote that AIDS “brought out the very worst malignancy and vindictiveness in the British tabloid press. The editors who, at the time, sought to spread misinformation about this disease and to torment its victims, should hang their heads in shame. They could have helped to curb the spread of HIV with information and reassurance. They chose to do the opposite.”

Sanderson’s first mention of AIDS came in Issue 64 of Him, the second of his columns archived online. “More and more medical staff are refusing to handle the bodies of AIDS victims in case they get ‘the gay plague’ (as several newspapers continue to call it),” he wrote. “In its coverage of the story, The Daily Mail said starkly, ‘AIDS is a disease carried by homosexuals.’ If this hysteria persists […] how long will it be before AIDS victims are turned away from hospitals altogether?”

In the January 1992 issue of Gay Times, Sanderson lambasted the tabloids’ reportage of Queen frontman Freddie Mercury’s death from AIDS-related complications in November of the prior year. Mercury had made his diagnosis public just a day prior to his death. “Britain’s ignorant and lazy newspaper commentators gave [him] 24 hours to rest in peace before they proclaimed him the filthiest, vilest, most corrupt creature that ever walked the face of the earth,” Sanderson wrote.

John Junor, writing for the Mail on Sunday on December 1, 1991, predictably played the ‘think of the children’ card: “If you treat as a hero a man who died because of his own sordid sexual perversions, aren’t you infinitely more likely to persuade some of the gullible young to follow in his example?” Two days later Brian Hitchin, editor of The Daily Star, alleged in ostensible relation to Mercury’s death that “Princess Diana’s morbid fascination with AIDS […] endorsed it as an acceptable and fashionable way of dying.” I can only echo Sanderson’s remarks: was this man sane?

Some may lament the exhumation of historical reportage. Editorial teams have changed, after all, as have the norms and values of society as a whole. Besides which, although this all serves to concrete the dominant perceptions of Britain’s tabloid press, it’s hardly revelatory as to how they operate. We already know that they exist to exploit the irrational fears of the moment – be it AIDS, immigrants, or the working class.

While an unsurprising move from the tabloid, it is nonetheless morally bankrupt for The Sun to paper over the cracks of past prejudices. We look to the past to better inform the present, after all, and it’s obvious to anyone that Britain’s press is disinterested in learning moral lessons. We only need to look so far as the treatment of transgender people in the current moment. To fail to acknowledge the sins of the past is nothing more than callous avoidance.

Linkedin
RELATED ARTICLES
OTHER ARTICLES
Following the release of his latest album God Don’t Make Mistakes, the rapper talks horror villains, police brutality and being unafraid to show his vulnerable side.
In the last of our dispatches from OFFF Barcelona, Rufus Deuchler and Vincent Gault discuss the future of creative process.
Over the weekend, London locals came together to resist a pre-planned police raid targeting delivery drivers.
While protests over abortion rights rage in the US, access to abortion services is still almost nonexistent in parts of the UK.
Following the release of his newly republished 1991 book, Redheads, the American photographer reflects on his celebration of ginger people and their magnetic power.
Our new magazine is here, starring the inimitable Mitski. Order your copy now and join us on a trip around the world.