News & Politics / Do people really want to chat on the Tube? 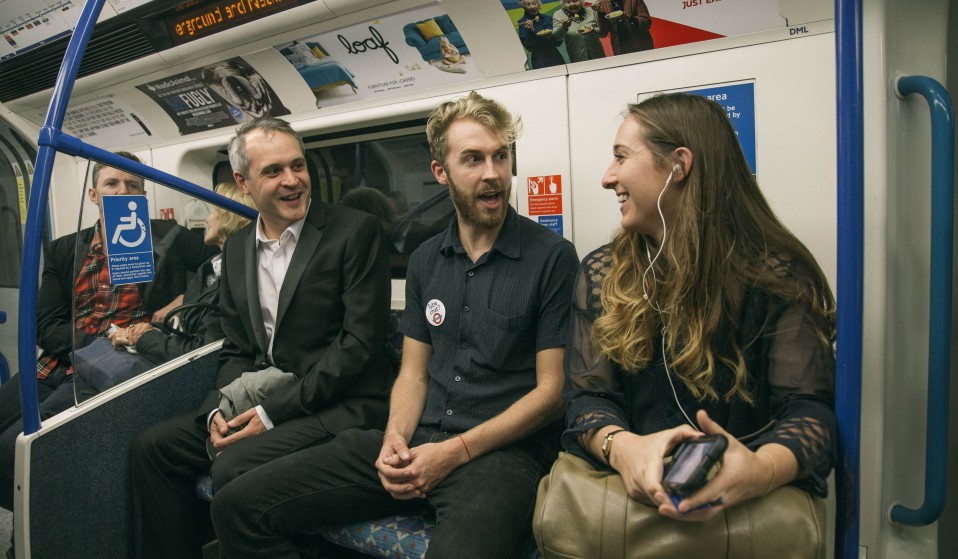 Unofficial Tube Chat badges have been handed out on the Underground to get antisocial Londoners talking. Could it work? I went to try one out.

Unofficial Tube Chat badges have been handed out on the Underground to get antisocial Londoners talking. Could it work? I went to try one out.

I absolutely hate the London Underground. I’m Hackney born and bred, but taking the Central Line to school at rush hour for five years made me never want to make the descent into the sticky, stuffy tube system ever again. It’s sweaty, cramped, unreliable and has a disconcerting smell, who’d pick that over riding a bike? 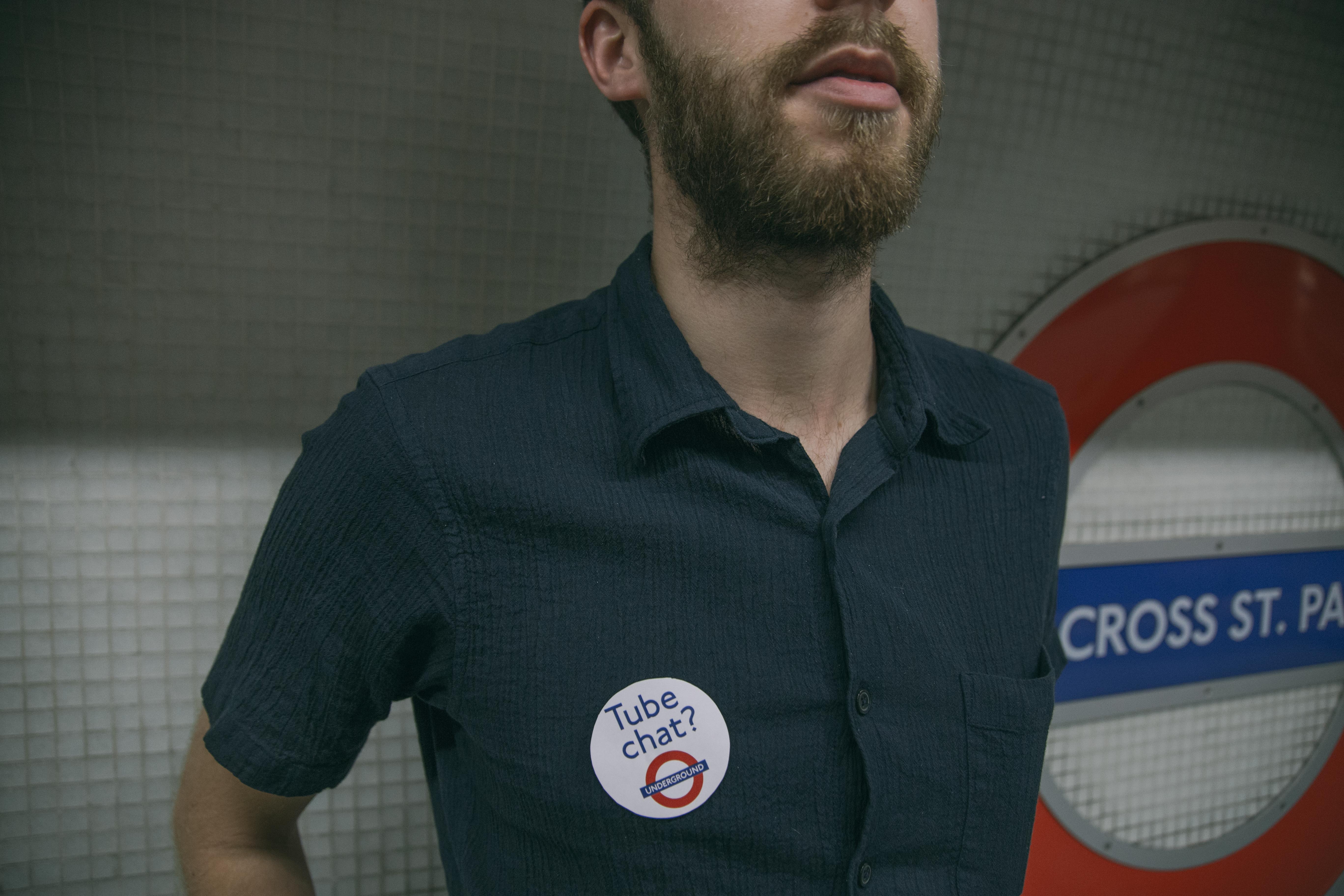 For me though, it’s also the silence, the uncomfortable emptiness that sees us look down, lips sealed. Head to any other public space in this vibrant city, you can chat with strangers, with your friends or family, yell something inaudibly across the street. On the Tube? Well, it just doesn’t happen.

Hoping to bring an end to the lack of conversation on the Underground, unofficial ‘Tube Chat?’ badges seem to have been handed out across the network, in the style Transport for London’s popular ‘Baby on Board’ badges. ‘Have a chat with your fellow travellers… You’ll benefit from a daily chat,’ the attached leaflet announced. Londoners reacted in horror.

If someone comes near me with a #tube_chat badge. pic.twitter.com/TO0FBeyyQg

I didn’t really understand why. What is it about the underground that makes conversation such a problem? Those Youtube videos where a carriage gets together and sings on their way home for Christmas are always doing the rounds, why can’t we all be so chatty every day? I wanted to find out, and I needed a badge to take with me.

After calling the TFL press office to find out where I could nab a chat badge, a bloke down the phone told me that they weren’t official merch, so I grabbed a pair of scissors to make my own. Would this DIY badge get people talking? 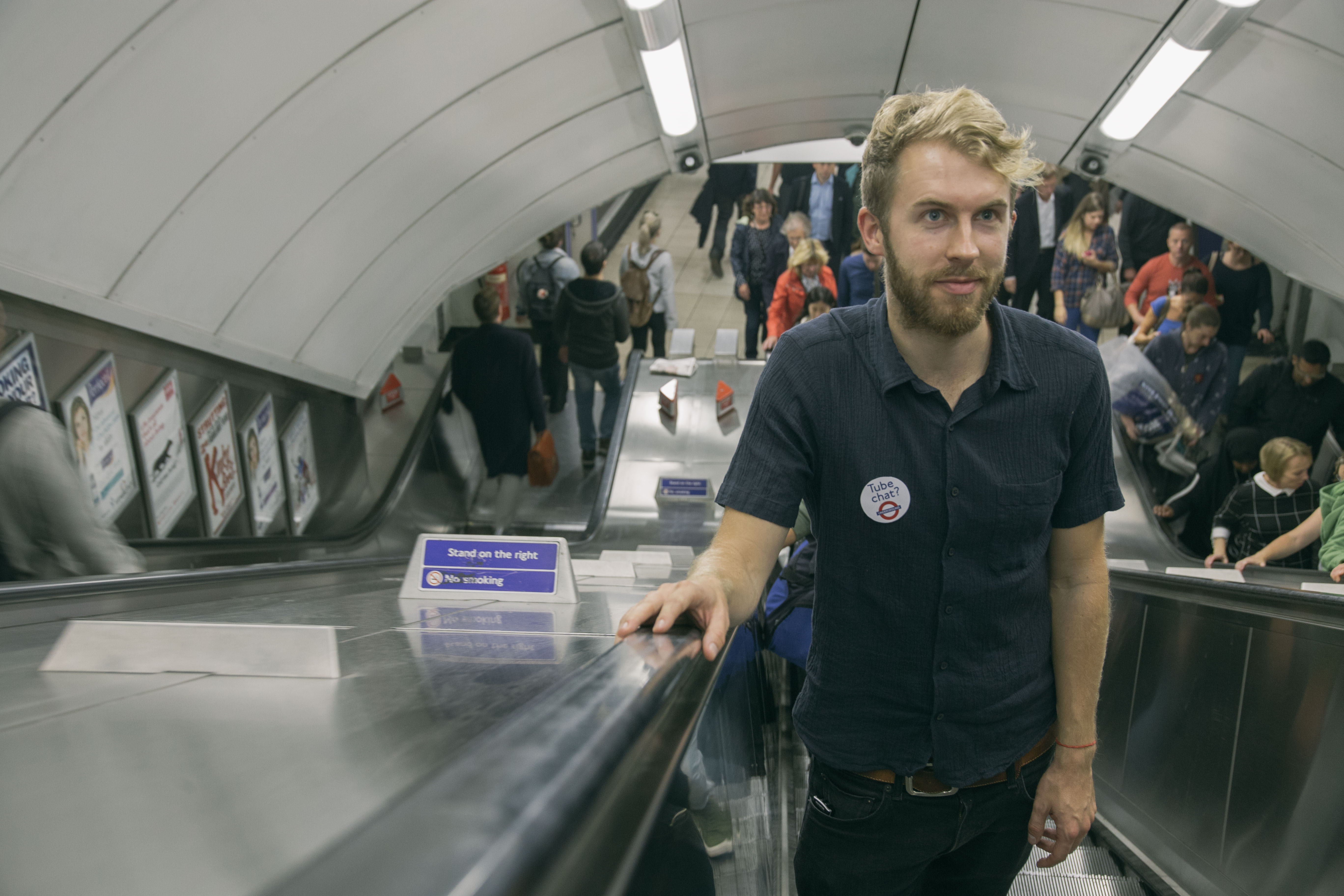 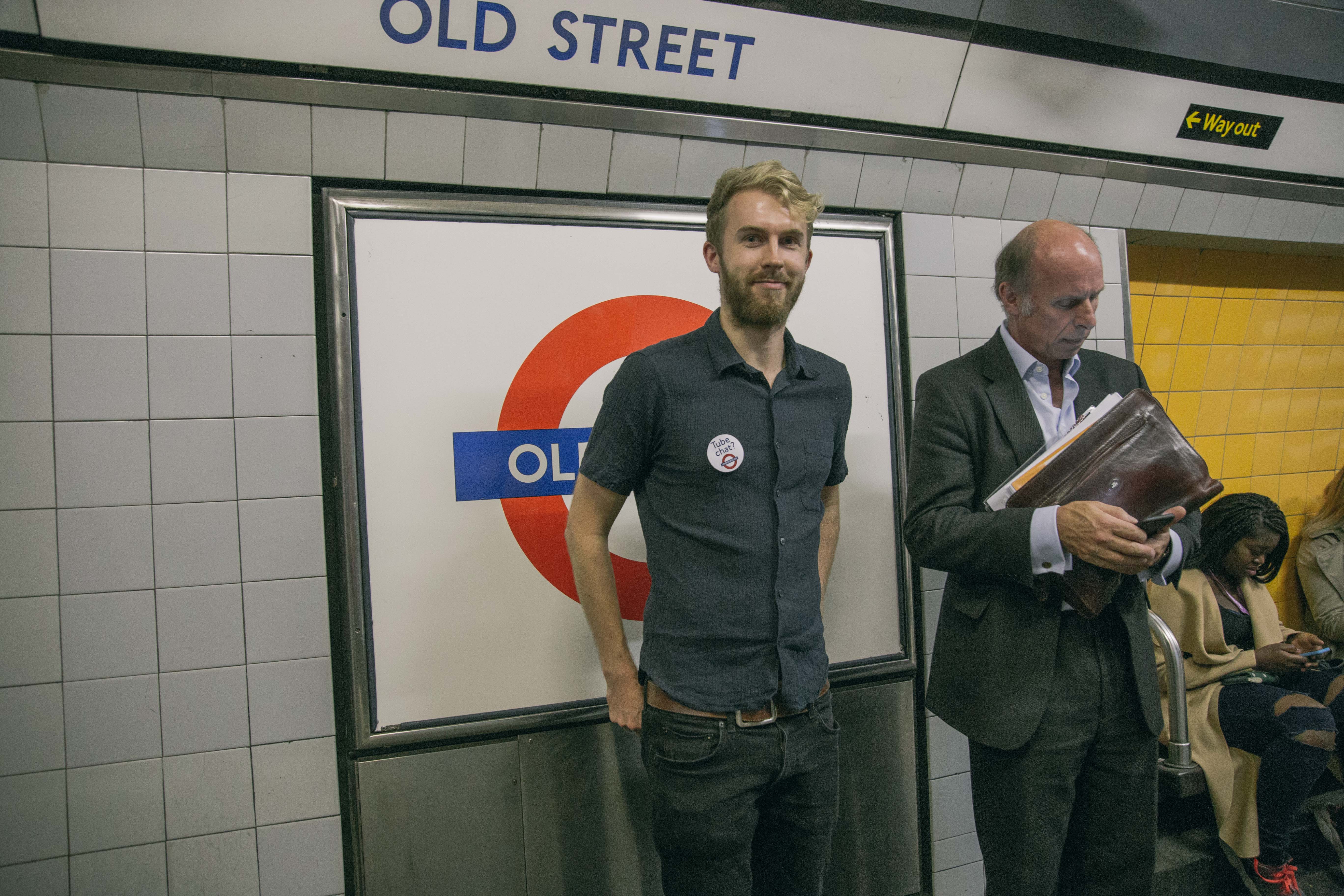 I don’t fancy my chances as I tap in at Old Street during the evening rush hour. There’s plenty of people around, pushing through the throngs of city workers and East London freelance types. On the platform, I stand next to an older man with a suit and briefcase, typing away frantically on his mobile. After 30 seconds of awkwardly waving my Tube Chat badge in his direction, I realise I’m going to have to make the first move.

“Have you got time for a chat?” He looks at me, his expression shifting quickly from confusion to annoyance. “No, I don’t have time to talk to you,” he almost spits back. “Can’t you see I’m still working?” It wasn’t going well.

Maybe I would have better luck on the train, I thought, pushing my way onto a carriage. As the doors slide shut, I notice people checking out the badge. A shorthaired woman opposite me studies it before looking up at me. I smile and give her my best ‘I’m not going to hurt you’ expression. Without a flicker of emotion, she looks back at the badge, then turns away. I look around the carriage and see everyone who had noticed it is now avoiding eye contact, glued to their phones and newspapers. 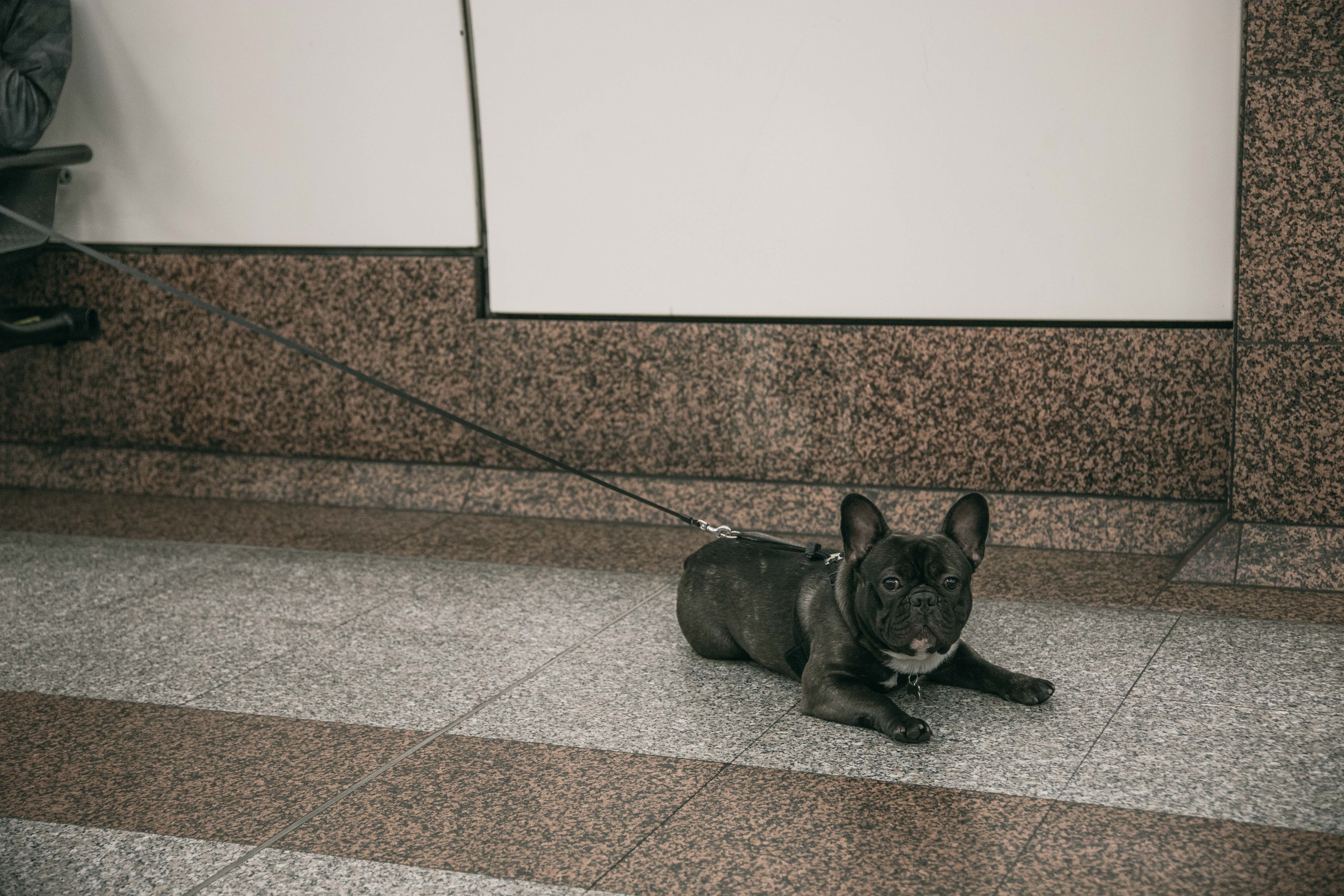 Arriving at Angel station I sit down next to Pierre, with his black French Bulldog Ross scuttling up and down the platform, pulling at its lead. “Does anybody ever talk to you on the tube?” I ask. “No one ever talks to to me, but sometimes people will come up and talk to the dog,” he says.

Just as we start ascending the tallest escalator on the network, I turn around to ambush Vincent. Does he want to chat? “Not really.” Why don’t people want talk on the tube? “Everyone in London is too busy, they’re working too hard and they never have time for anybody – especially at home time.” 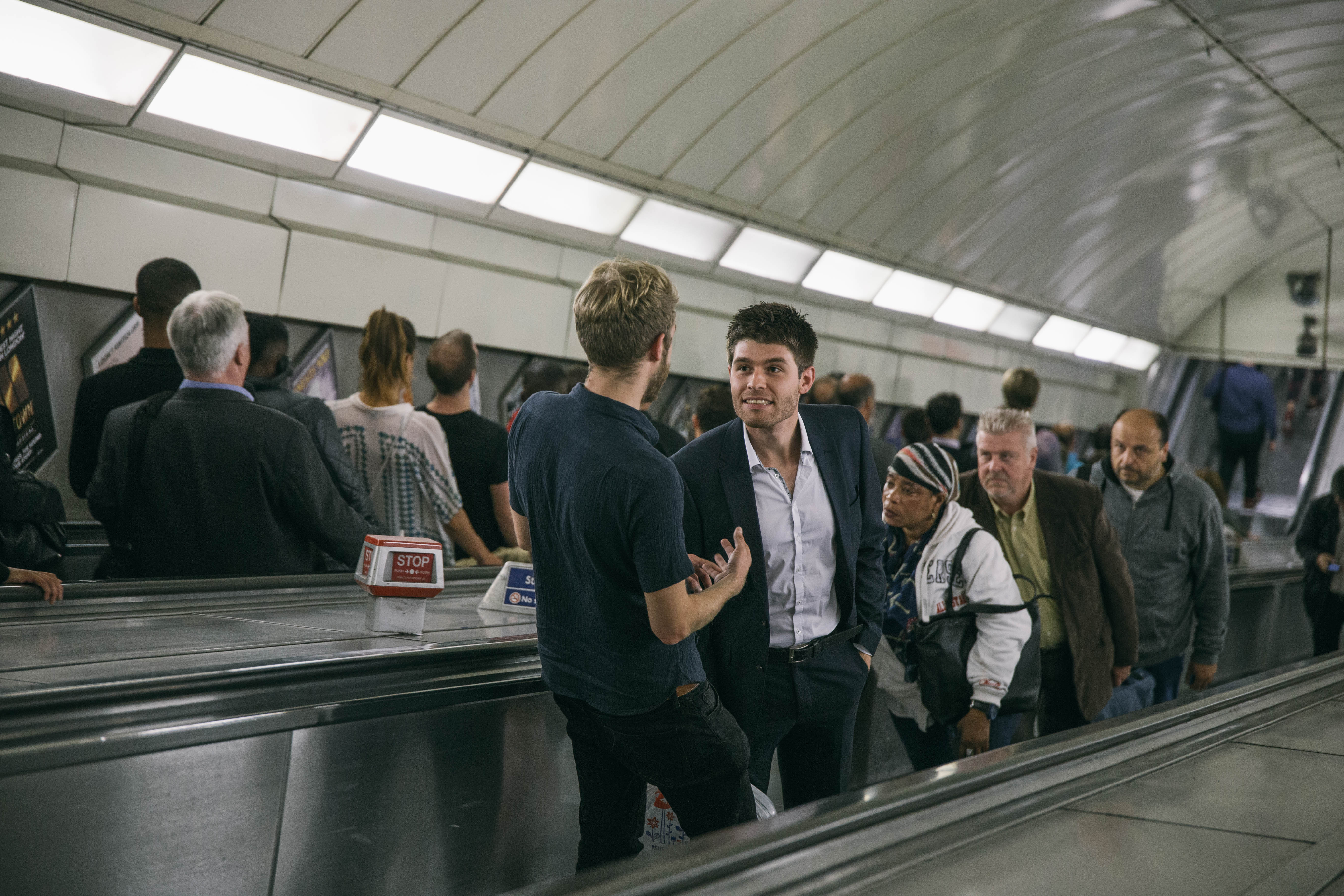 Is it any different in Lyon, France, where Vincent’s from? “No, they’re just as silent there…” So, how can we get people to talk on public transport? “That would be really hard,” Vincent reflects. “You would have to kick people in the leg to get them to talk to you.” I don’t think that will catch on, Vincent.

Later, I sit down on a southbound Victoria line train from Kings Cross, between a man in a smart suit and a woman with headphones in. I feel chances of conversation are slim, but I’m proved wrong. “What’s your badge about?” Josh asks. As I explain, Augusta chimes in and a woman opposite is beaming at the spontaneous conversation erupting in front of her eyes. 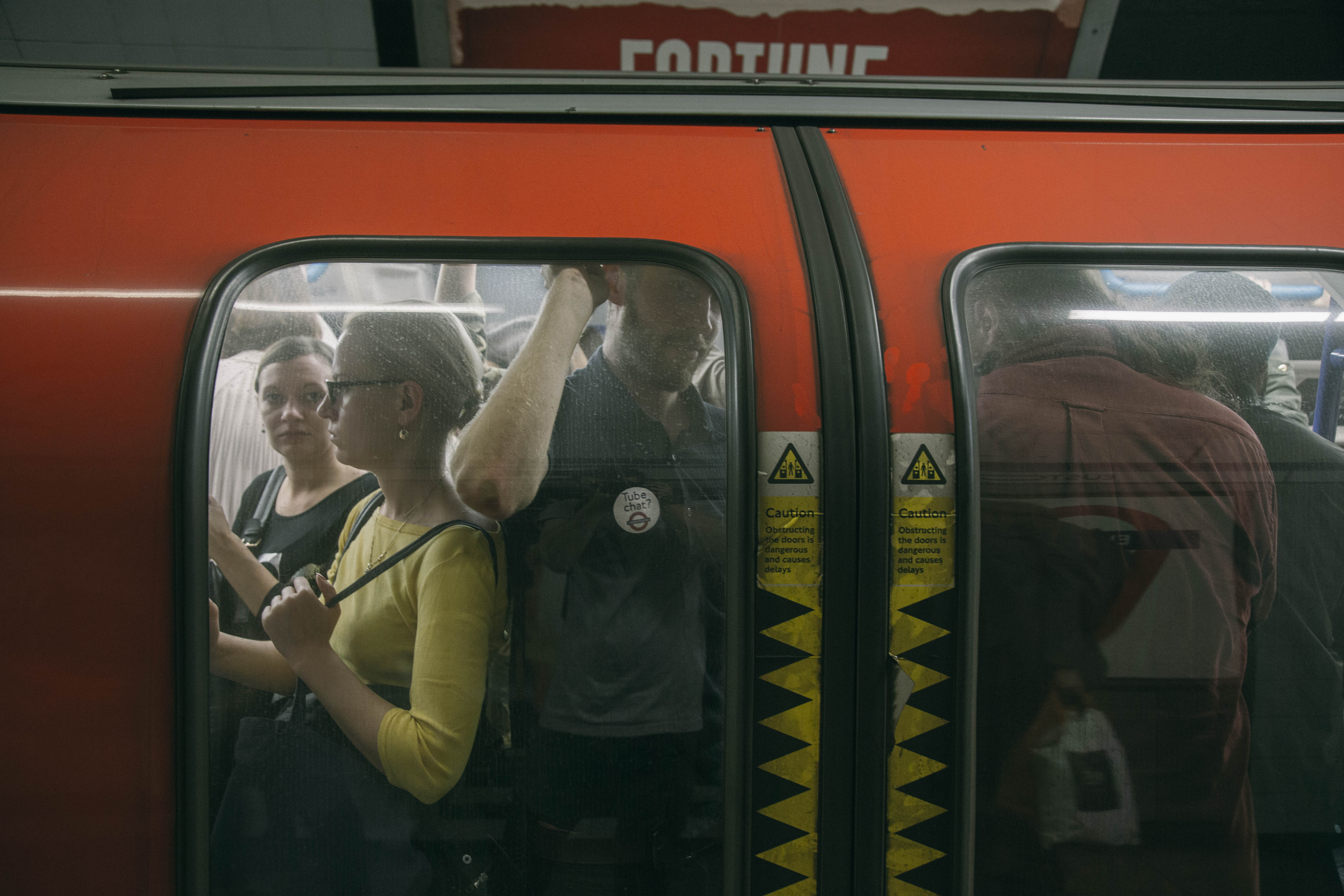 So, do you guys usually talk to people on the tube? “Never,” Augusta and Josh reply, without a thought. They agree that more talking would make the tube a better place, but wouldn’t ever start the conversation themselves. Why not? “It’s just not the done thing,” Augusta sighs. “You should come back late at night when everybody’s drunk.” Just as I think we’ve got something good going on, Augusta makes her excuses and gets off at Euston.

I ask Josh why he started talking to me, despite the dirty looks that would obviously ensue. “I’m just heading in to work, to play at a hotel, so I guess I’m not as tired as everyone else,” he replies. If everyone agrees it’s a good idea, how could we get more conversations going on the tube? “You could have those badges in piles at the turnstiles and if you wanted a chat, you could pick one up,” he suggests. Would he pick one up? “Maybe sometimes, but probably not.” Back to square one. 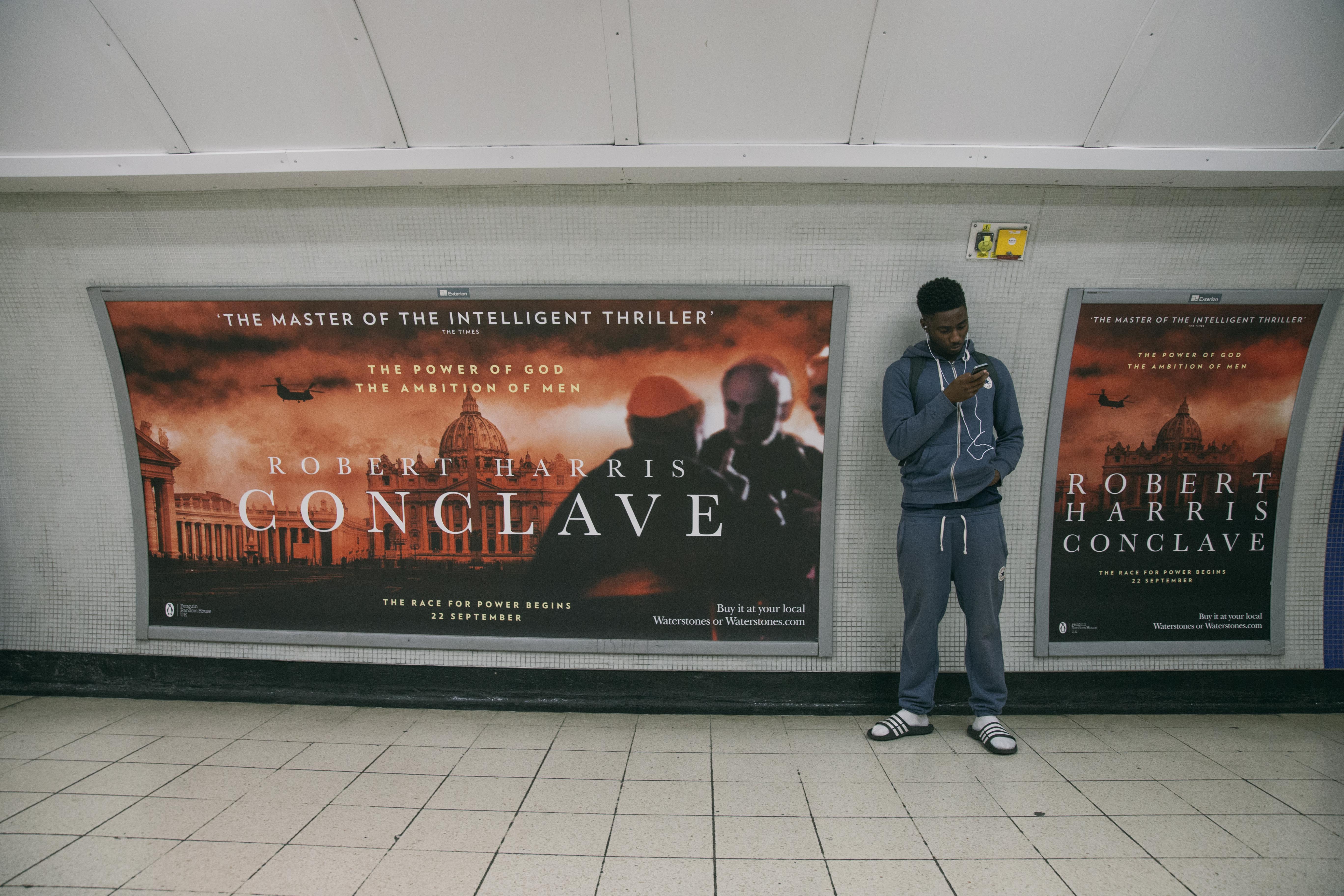 On the westbound Central Line, I approach Joanna from Thessaloniki in Greece, so I pick her brains to find out whether there’s a deafening silence on the continent’s carriages? “Yeah, Greek people aren’t as busy and they love to talk,” she explains. In her three years living in London, has she ever started a conversation with a stranger on the underground? “No, never,” she replies, before Carol, sitting next to her, jumps in. 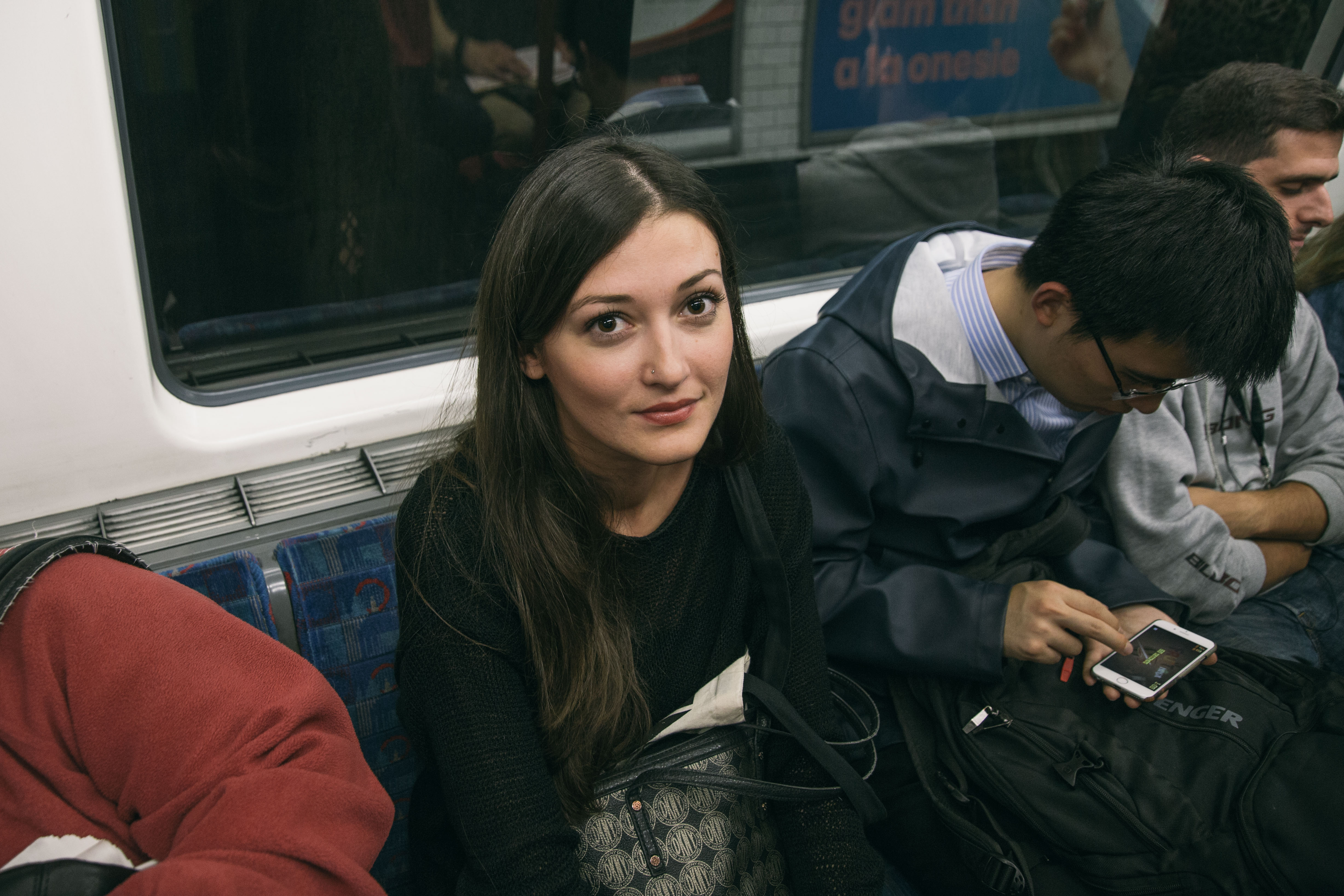 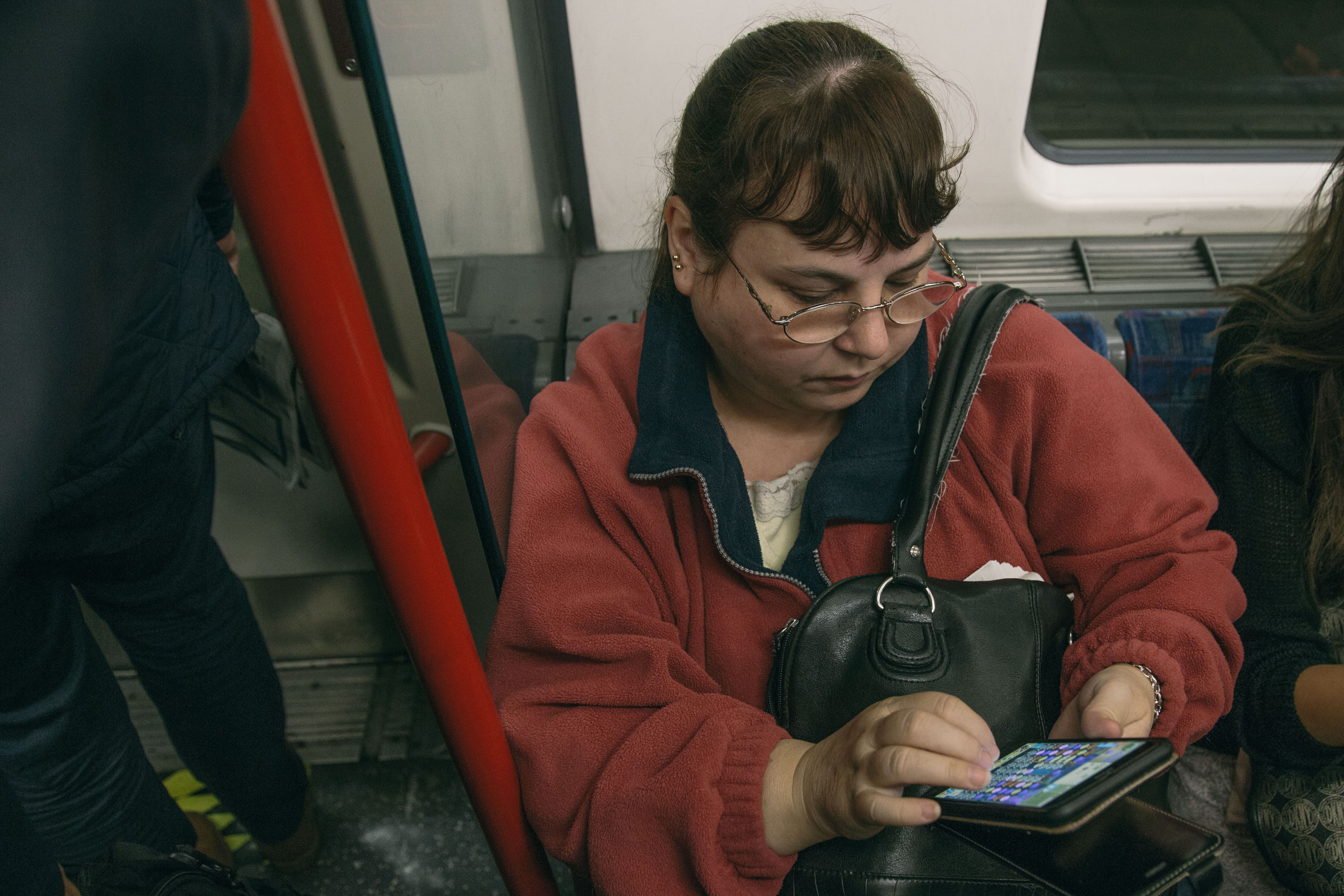 “You have to be really careful about who you talk to,” she explains. “There are lots of weirdos I’ve met some really undesirable people on the Underground. One person almost followed me all the way home and I had to hide in a newsagent. As a woman, you have to be exceptionally careful, especially late at night.”

At Kings Cross, I double-take: There’s a man walking through the subway with a splendid white parrot. With his cockatoo Teddy on his shoulder, Locherz would certainly fit most people’s definition of a weirdo. Sadly, Teddy’s got nothing to get off his chest, but as I get chatting to Locherz, I realise the actor is easily the most interesting person I’ve met so far. “I was born and bred in London, I’m a true Cockney,” he explains, “but nobody’s got time for anyone, everything’s two hundred miles an hour. Forget about changing that – we’ve all got to get somewhere, we’re like headless chickens.” 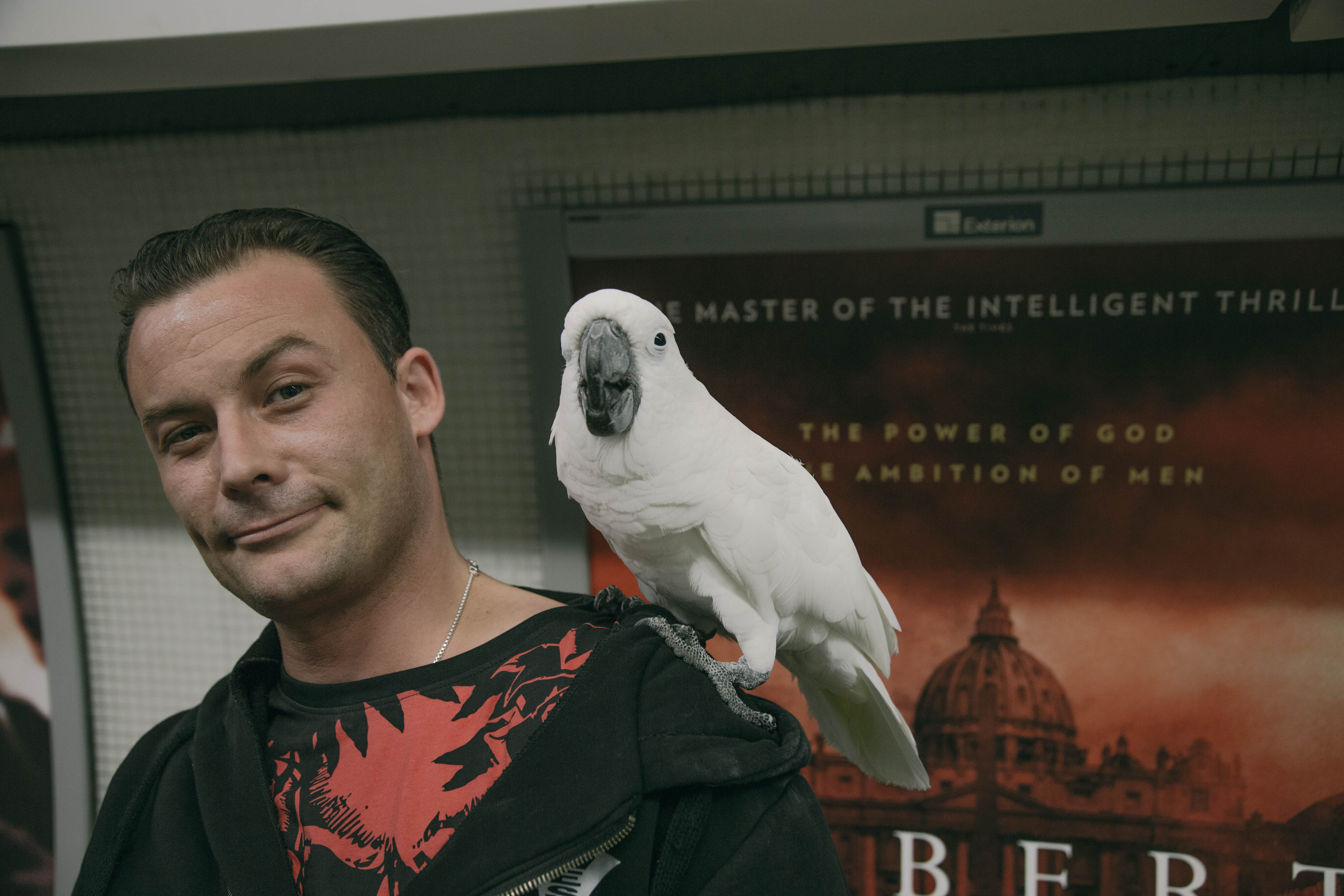 After two hours on the tube network, I would have to agree. I’ve talked music, football, pets and politics – and heard perspectives on London life from people from around the globe.

Yet wearing the badge, only two of those conversations weren’t initiated by yours truly – and getting others to talk has been like pulling teeth. Even people who are happy for dialogue admit they would never initiate it themselves. If we wanted to get people talking the only fail safe solution seemed to be booze. 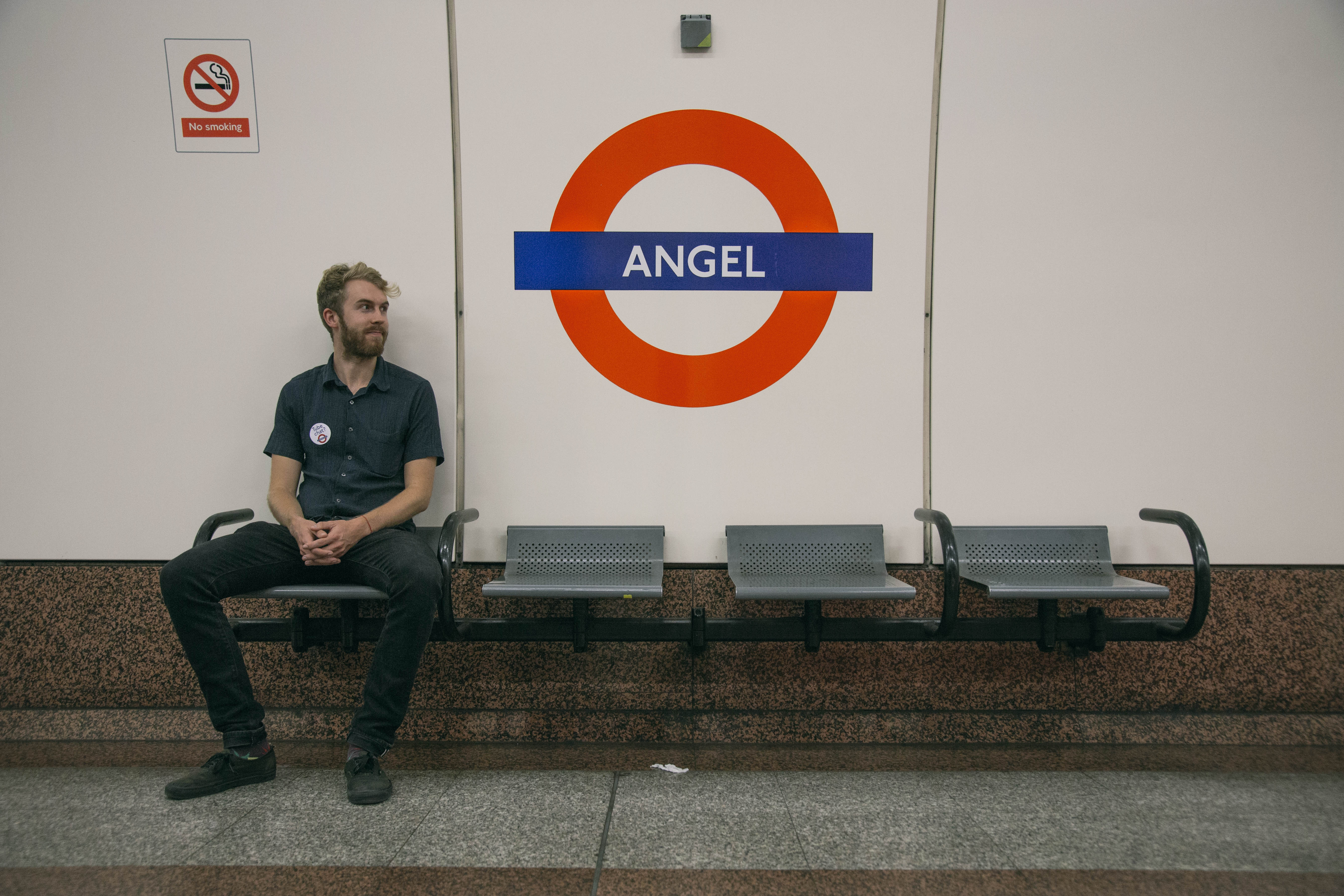 So, is the art of conversation alive and well on the Underground? It’s in dire need of life support – and possibly terminal. I won’t be abandoning my bike any time soon.

Linkedin
RELATED ARTICLES
OTHER ARTICLES
With the UK now set to run out of vaccines, people working in the sex industry – particularly outside of major cities – have been left especially vulnerable, reports Brit Dawson.
Photographer Bud Glick recounts documenting everyday life in the area, and what it taught him about the Chinese immigrant experience.
From the chip shops, to the bingo parlors and burlesque dancers, photographer Mike Coles remembers capturing scenes of holidaymakers by the English coast.
Steel City is often overlooked when it comes to the country's cultural radar despite its role in shaping electronic music.
After rewriting the indie rulebook with her devastating songs about romantic longing, the singer-songwriter is now imagining a future in which the artist is no longer a product.
In the latest instalment of Photographers in Conversation, the creator talks portraiture, platforms and taking inspiration from Little Simz.