News & Politics / What’s behind the rise of emotional spending? 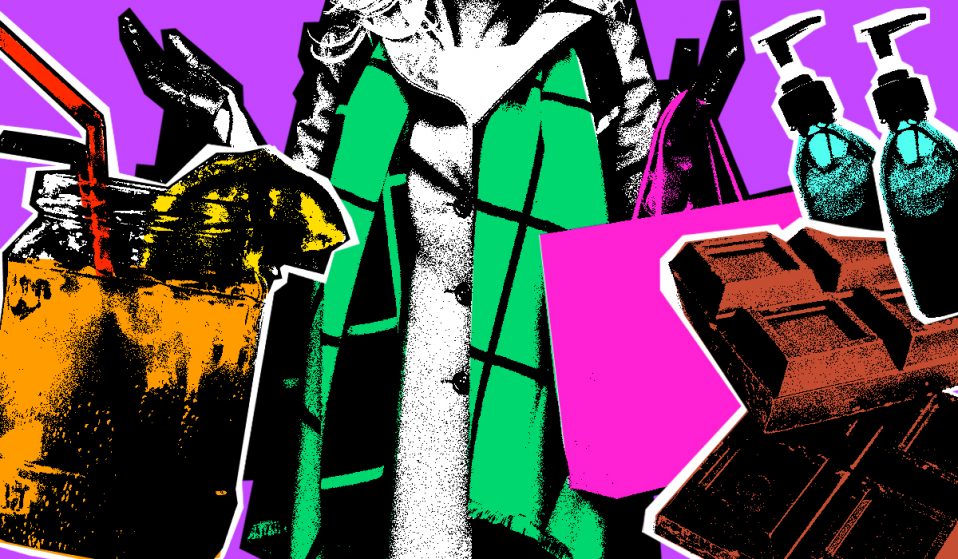 As the cost of living crisis bites, letting go of treats to keep us going is proving difficult – but we should’t just blame ourselves for our financial worries.

As the cost of living crisis bites, many people are continuing to treat themselves as a coping mechanism and in some cases, spending beyond their means. But we shouldn’t just blame ourselves for our financial worries, writes Eve Upton-Clark.

Hannah, a 26-year-old podcast producer who struggles with chronic illness and insomnia, spends a lot of time on apps like Depop and Vinted in the middle of the night. Browsing through the clothes, she imagines the places she would wear them – if she was well enough to go out. “My main source of dopamine right now is buying things for myself,” says Hannah. “Life can be really fucking hard and dull when you’re always sick in bed.” Hannah tries to focus on second-hand purchases as a way to ease her guilt about shopping. But, as she puts it, “at the end of the day, it’s still overconsumption of things I do not need”.

Whether it’s second-hand clothes or a snack on-the-go, it can be difficult to curb spending – even when the cost of living crisis has stretched people’s finances thin. For those left in a position of having to choose between heating and eating this winter, treats are simply out of the question. However, for many people facing financial worry, going out for a meal or a drink at the pub is a way to alleviate that stress. While there are things we can do to blow off steam that don’t involve spending, the commercialisation of our leisure time and social expectations often result in spending beyond our means.

“I used to set rules for myself like, ‘no shopping for an entire year’ and only exclusively buying second hand for ethical and environmental reasons,” explains Hannah. “Since the cost of living crisis and becoming increasingly unwell, I have lapsed in some of those very strong ethics, as I use shopping as a coping mechanism.”

Hannah admits the habit has worsened in the last three months. “I know the overconsumption of items is connected to the psychological struggles I am having,” she says. “It hasn’t tipped over into uncontrollable, but it has impacted my ability to save money and keep up a good emergency fund, which I sometimes hate myself for. My rent has just been raised and I am constantly running numbers on how long until we will have to move out.”

Hannah’s guilt and self-loathing is something many people share. This is to be expected, given how quick the government and the right-wing press are to blame ordinary people for their own financial hardships. It’s easy to internalise this narrative and see ourselves as entirely responsible for our financial situations, when in reality, much – if not all – of the fault is down to political choices.

But the guilt we’re made to feel doesn’t necessarily stop us treating ourselves. New research by the money-saving app HyperJar shows even during the cost of living crisis, 26% of those surveyed won’t give up spending on clothes and retail. Other non-negotiables include spending on favourite foods (44% of Brits refuse to give up) and hair and beauty products and treatments (32% won’t give up).

“Our research clearly shows emotional, ‘quick hit’ spending is a cause of debt for millions of people – especially for younger generations,” says Mat Megens, finance expert and the CEO and founder of HyperJar. “It’s the financial hangover after that instant dopamine hit from spending. That obligation to pay for things after you’ve got them has a negative emotional effect, whether we know it or not, because we now have a debt which prevents us from doing other things in life.”

Charlie, age 30 and currently unemployed, has a habit of ordering non-alcoholic drinks off delivery apps to their house. They will easily spend up to £20 on a single order for an array of vitamin waters, fruit juices and health shots. Other guilty pleasures are salted caramel M&Ms and takeaway coffees.

“It makes me feel like I’ve got more control over my money problems because I just kind of defiantly spend it anyway,” says Charlie. “I’d rather spend my money on these little comfort things to get that instant hit of serotonin, rather than other boring but important things that I probably should spend my money on, like bills.

“When I recently broke up with my ex-boyfriend,” Charlie continues, “I went on a work trip to New York and took out a £2000 overdraft and spent the fuck out of it. I was going through a rough time and wanted to keep my mind distracted.” This has left Charlie scraping to get by. “Almost every month I’ve struggled to meet my rent.”

In a time of immense financial insecurity, it’s hard to predict when we’ll feel solid ground below our feet again. “For me, sometimes having less disposable money makes me go blind to it, because I just know whatever I’m spending is irresponsible,” says Charlie. “I may as well make the most of it and make the treats worth it, rather than go halfway.”

Whether it’s financial uncertainty or impending climate catastrophe, it’s understandable that people would reach for the things that bring them immediate comfort. As Imogen West-Knights wrote in The Financial Times last year, “treats can act as a temporary band-aid over a deeper need. When we are very tired […] what we might really need is more sleep. But if we can’t get it, a more easily available source of comfort might be chocolate or wine.” She named this phenomenon ‘treat brain’.

Research has shown that spending money can reinforce a sense of control over our environment, ease sadness and feel like a positive personal achievement. However, with ads encouraging us to drop cash on every app, spending money as the primary outlet for managing emotions can lead to much bigger problems.

Katie, a 25-year-old project manager, has noticed her habit of spending money on takeaway food and coffee when feeling sad increase in recent times. “I’m not good at budgeting and would find myself only just having enough to pay rent at the end of the month.” She eventually was forced to move back in with her parents in London because of the rising cost of living.

“The times in my life where I’ve had more money, I’ve been more motivated to try and save,” Katie explains. “But when I already feel like I don’t have any money left at the end of the month, then it feels like there’s no point, and I may as well spend the little money left over on everyday treats that make me happy.”

Erika Wasserman, CEO of Your Financial Therapist, recommends putting those treats in your budget, if it’s something that you enjoy. “Let’s say you spend £20 a week on these treats, such as coffee or cake – put that £20 in a cash envelope. Now, that money could be put towards a longer-term spending goal. You just have to ask yourself which one do you enjoy more? And you can choose each week; it doesn’t have to be a forever statement.”

Another tip she recommends is tying treats to your goals. “Go get the coffee or croissant, but after you hit that deadline or on a Friday afternoon out with friends,” explains Wasserman. “If you tie it to a goal with work or with your social life it also brings the spending more meaning instead of just spending £10 because you’re walking past a bakery.”

With the cost of living crisis spiralling out of control, the small treats that get us through the day aren’t going anywhere. Adding them to your budget or tying them to your goals can help, but will only get people so far with UK food prices soaring by the fastest rate on record, landlords increasing rent and utility bills still rising. After all, the blame for our current financial instability lies with a government that has inflicted over a decade of austerity – not with your takeaway coffee habit.

Linkedin
OTHER ARTICLES
The action took place in response to the 200 asylum-seeking children who were placed in hotels run by the Home Office who have gone missing.
A new podcast is opening up the conversation between trans women and trans amorous men in the hope of building coalitions.
Following the release of his debut single, Deyaz talks battling addiction, dealing with his struggles through music, and building a budding music career from his living room.
After blocking the Scottish government’s gender recognition reform bill, Westminster is now devising further changes to the law to make it harder for trans people to self-identify.
At his West Bank restaurant, Fadi Kattan established himself as the voice of modern Palestinian cuisine. Now, he’s bringing his innovative, bold flavours to the UK’s capital.
Activists and campaigners are fighting back against new laws that would seriously undermine the ability to take industrial action, calling it an attack on fundamental workers' rights.