News & Politics / Why are trans people still left out of the AIDS narrative? 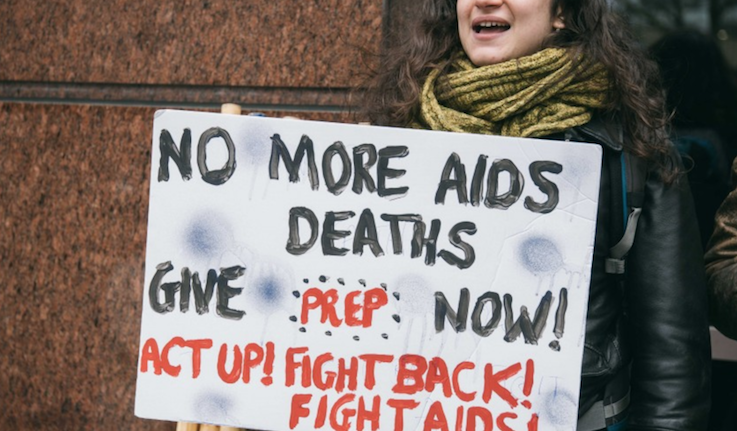 Discrimination and marginalisation of trans people is exacerbating the risks they face when it comes HIV/AIDS.

Despite huge advances in the treatment of HIV/AIDS, discrimination and marginalisation of trans people is exacerbating the risks this community face when it comes to condition.

Despite being left out of the wider HIV/AIDS narrative, the trans community and those living with the condition have long overlapped. Lou Sullivan, a US author and the first known gay trans man diagnosed with AIDS in 1987, spent many years campaigning for psychiatric and trans health organisations to recognise the existence of gay trans men. In the 1990s, Connie Norman, a trans woman living with HIV, served as a prominent member of Act Up in Los Angeles, and fought tirelessly for the world to pay attention to the AIDS crisis. Indeed, countless trans people living with the condition have followed in their footsteps as HIV/AIDS activists.

The past few decades have seen huge steps forward in the fight against HIV: an incredible 94 per cent of people living with HIV in the UK are diagnosed, with 98 per cent of these on treatment and 97 per cent having an undetectable viral load, meaning they cannot pass on HIV. But with trans people still excluded from the conversation, they are left woefully underserved by messaging on prevention, diagnosis and treatment.

General ignorance and wilful bigotry in the shape of transphobia has led to a dearth of research when it comes to the impact of HIV/AIDS on the trans community . What small amount of data there is, based on the 2014 UNAIDS Gap report, is riddled with flaws and gaps. Most ‘global’ studies skew towards the US, meaning it’s hard to extract specifics about the experiences of trans people dealing with HIV in the UK. There are also issues around the way that data on gender is collected, with the broad and amorphous category of ‘trans’ being inconsistently defined from study to study.

The data often refers only to trans women, and even this can be shaky, as in some studies, trans women have been misgendered and misclassified as gay or bisexual men. The UNAIDS report outright states that, as of 2014, “The impact of HIV on transgender men [had] yet to be established”. Information on HIV among non-binary people is even harder to come by.

On the data gap, the National Aids Trust stated: “Beyond not having accurate prevalence statistics for the UK, these data uncertainties effectively lead to the erasure of trans* people from debates around HIV and healthcare more broadly, and make it difficult to assess the range of services required to address HIV-related need among the trans* population in the UK.”

Everyone should have access to HIV prevention and treatment.

This #WorldAIDSDay, join our campaign for HIV rights. #HIV is a #humanrights issue >> https://t.co/S54UhkGMsX#RockTheRibbon #WorldAIDSDay2021 pic.twitter.com/UecB8igz0P

These gaps are beginning to be redressed – at least in some regions. Since 2017, Public Health England (PHE) has published data on trans people accessing HIV care in England, as well as those newly diagnosed. In April 2019, Peter Kirwan of PHE and Michelle Ross of CliniQ – the “holistic sexual health, mental health and wellbeing service” for trans, non-binary and gender diverse people – presented data drawn from the 2017 results of PHE’s updated HIV and AIDS Reporting System and self-reported data from a survey conducted by Positive Voices. While they found no observed difference between the standard of HIV-specific care accessed by cis or trans people, trans people living with HIV reported worse mental health and more discrimination than their cis counterparts.

Inclusive, reliable local research is vital to improving the provision of HIV-related care for trans people in the UK, allowing services to be tailored to the community and their actual needs, rather than perceived ones based on broad global statistics.

Rory Finn, who works on sexual health promotion with the Terrence Higgins Trust, points out that statistics like the oft-cited “trans women are 49 times more likely to acquire HIV than other adults” are misleading. While true across the world, the stat does not reflect the reality within the UK. Finn maintains that if we overstate the risks of trans women as a whole, “we underestimate the risks of certain trans people”.

Finn continues: “I identify as queer and gay, and I have sex with cis men, and time and time again, I find health information telling me that I shouldn’t be taking PrEP, because I’m not at risk of HIV. I find that really frustrating, because I know I’m at risk of HIV [as a trans man] […] I know of a few trans men who have become positive, when there were health interventions that could have been put in place.”

But these issues go deeper than just a lack of reliable data-sets and strong messaging. An ongoing climate of transphobia has exacerbated the problem, making trans people reluctant to access services not specifically geared towards them for fear of stigmatisation or rejection. These fears are not unfounded: 70 per cent of respondents to a recent survey by Trans Actual reported experiencing transphobia in a healthcare setting, and 14 per cent had been refused GP care on at least one occasion because they were trans. Almost half felt that their GP did not have a good understanding of their needs.

For trans people living with HIV, life at the intersection of two marginalised groups lays bare the shortcomings of a social environment not necessarily equipped to support either. The dual marginalisation often means that patients are passed from pillar to post, with some reporting that practitioners are eager to refer them back to gender identity or HIV-specific services, even for routine complaints. In these cases, GPs might attempt to pass a patient on to a gender identity clinic, only for the clinic to pass them back when it becomes apparent their needs fall outside their remit, ultimately making treatment more difficult to access.

“For me, it used to be [that GPs would] palm things off back to the gender clinic,” says Niamh Millar, a Living Well Specialist with the Terrence Higgins Trust, who is HIV positive. “Now it’s: ‘Is this anything to do with your [HIV positive] status?’ [Even though] you know when you go to the GP that it has nothing to do with that.”

Rory Finn believes these kinds of interactions put people off accessing health services, which in turn, could affect sexual health outcomes. “The broad brush of this is that trans people – regardless of their status – are facing health inequalities when accessing any healthcare, but in particular, NHS healthcare,” he says. “While I think sexual health and HIV medicine is much more enlightened, it doesn’t take away the experiences trans people have in other parts of healthcare, and those bad experiences will affect access to HIV and sexual health care.”

Millar agrees. Speaking about accessing support just over a decade ago, she recalls her concern about whether she would be accepted in a women’s group after telling them she had HIV. “Rather than the first concern being ‘I want to get help’, it’s ‘Will I be accepted when I make that step to get help?’” she says.

Often spearheaded by trans people themselves, there are charities and organisations attempting to plug the gaps in trans health provision with initiatives providing non-stigmatising, informed services for transgender patients. These organisations are primarily clustered in cities like London or Brighton. “We’re lucky in Brighton and Hove because we’ve got really good local provision,” says Finn. “That’s born out of the fact that we’re in a city that has a really large LGBTQ+ population, a large trans population […] That’s not being seen in the rest of the country.”

An expansion of these kinds of services, with trans people on-board at all levels, would make an enormous difference to sexual health outcomes and HIV care within the community. Many of those working in the field are clear on what is needed to allow all trans people living with HIV to live well, and to improve sexual health outcomes in general among the community. It is what Finn refers to as “cultural competence” – the understanding of the specific issues and experiences relevant to trans people, as well as a baseline of knowledge about trans health needs.

Trans people need improved access to healthcare in general, which in turn, will increase their confidence in accessing sexual health services. They need to know that when they seek support it will be provided to them, and that healthcare practitioners will be knowledgeable about their needs and not stigmatise them. This need is even more acutely felt for trans people living with HIV. If the UK government is serious about ending new diagnosis of HIV by 2030, then health services must be fit for purpose – for everyone who needs them.

Linkedin
RELATED ARTICLES
OTHER ARTICLES
After blocking the Scottish government’s gender recognition reform bill, Westminster is now devising further changes to the law to make it harder for trans people to self-identify.
After a two-year hiatus and a new album, the Nigerian artist is riding high. Now, he wants to bring his alternative, genre-bending sound to the world.
Taking us through one of the most dynamic years in recent history, Laylah Amatullah Barrayn new photo book contains tender yet confrontational portraits.
Photographer Sean Maung reflects on documenting a small town in Pennsylvania afflicted by high levels of unemployment, poverty, violence, crime, and addiction.
David 'Dee' Delgado’s photo project is about honouring and uplifting the city of his youth, and a world rapidly disappearing under the relentless onslaught of gentrification.
A new law change is enabling Britain’s donor-conceived children to know the truth about their origins – but campaigners say the fertility industry must do more to protect people.