News & Politics / Activism / Why did the US military create fake towns in the ‘60s? 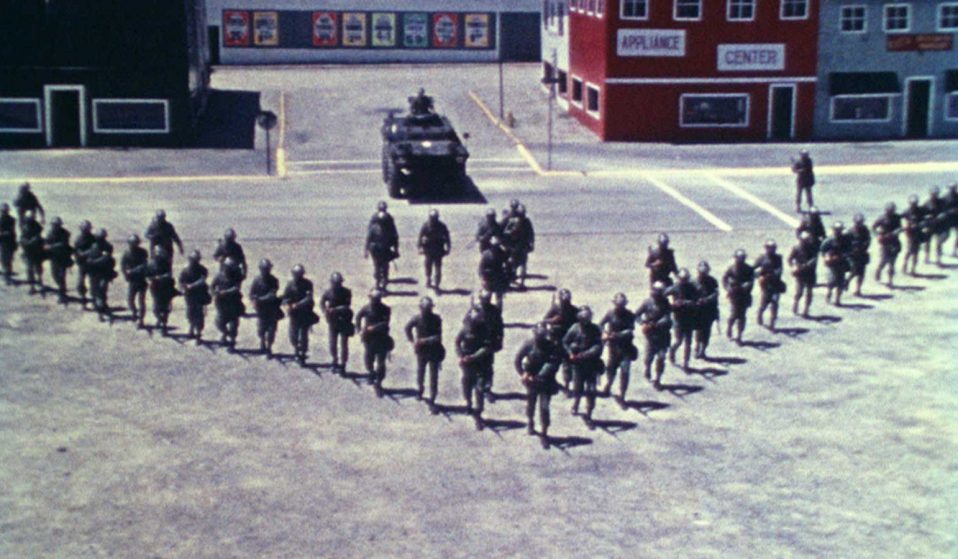 A new documentary explores the government’s efforts to quash the protest movements of the late ‘60s by any means necessary.

A new documentary explores the government’s efforts to quash the protest movements of the late ‘60s by any means necessary, drawing unsettling parallels with policing today.

In 1968 there was a small town in America that looked like many others. Young men in Levi jeans and white t-shirts walked the streets, smoking cigarettes and chatting with other people. There was a row of shops, a general store, a hardware place, a pawnshop, bar, and pharmacy. It had just about everything you might need to live a normal, happy, quiet life in Middle America.

The speed limit was kept to 25mph, which normally would have been to keep the local children safe while out playing. Except no children lived here. In fact, nobody lived here. The general store door was painted shut. All the doors were painted shut. Because they didn’t lead anywhere and were made of wood. The entire town was a construct, a set, a fictional creation built by the army for the US military to practice dealing with imaginary riots in response to rising nationwide protests. They named it Riotsville.

They flooded the fake town with military arriving in armoured trucks, carrying guns, shields, batons, and hundreds of soldiers. Even soldiers on leave from Vietnam turned up to play roles of protesters, who screamed and shouted and waved banners with generic slogans. In response to this choreographed civil unrest, the military swarmed in, they smashed glass-fronted shop windows and rounded up troublemakers and threw them in the backs of trucks and buses. Scores of on-looking military officials clapped and cheered as the imaginary protesters – all with uniform military buzz cut haircuts – were carried away and peace was resumed once more in Riotsville.

On the surface, this might appear to be standard military training during a time of civil unrest in the country. But in reality, it reveals something far more sinister. In a new documentary, Riotsville, USA, director Sierra Pettengill – through extensive archive material shot by the military and news channels – explores this event as a pivotal moment in US history where the protest movements of the late 1960s came into conflict with increasingly militarised police departments. 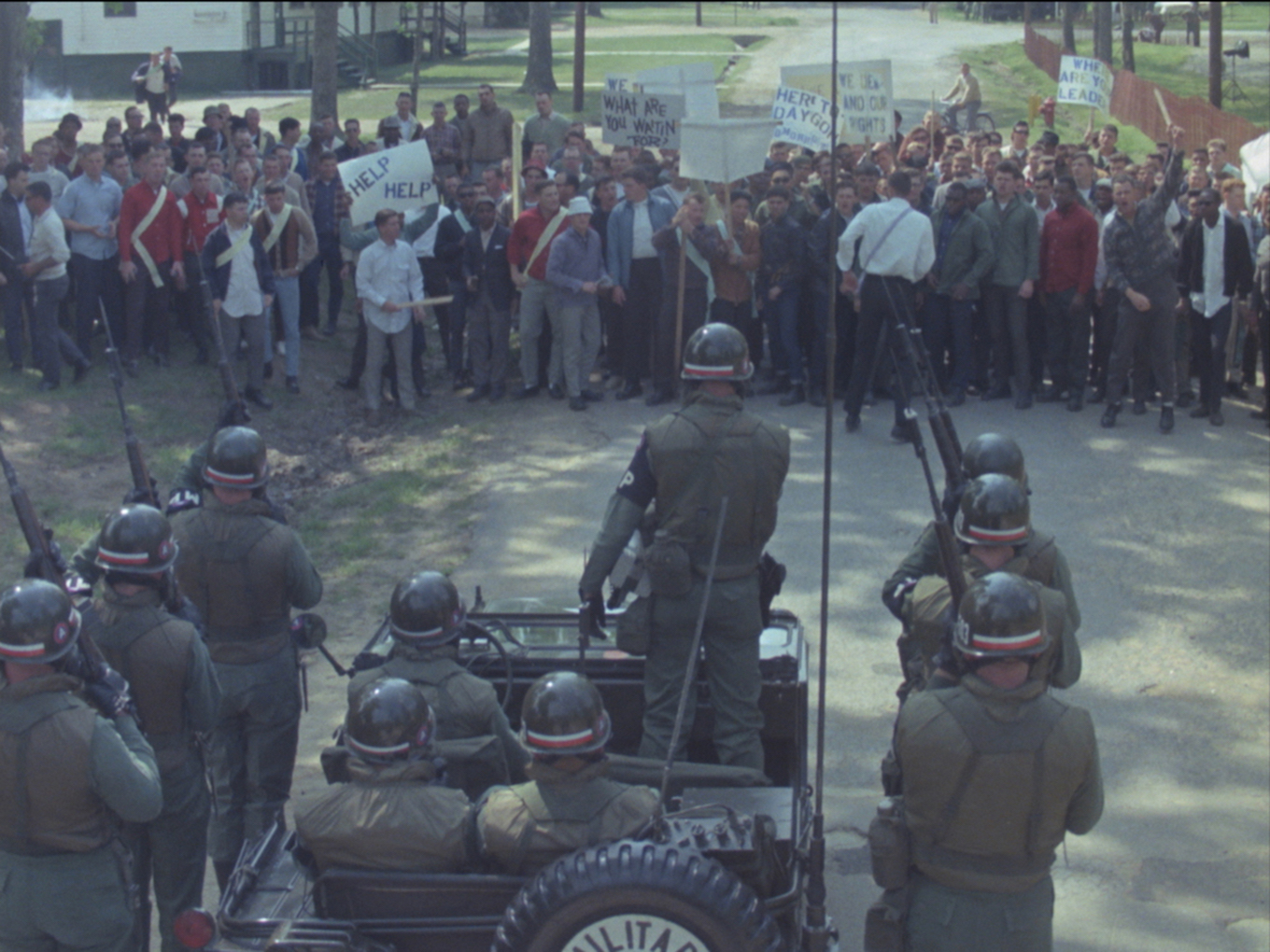 For Pettengill, it was the opportunity to take a deeper look at the socio-political backdrop of the 1960s. “I was raised by Boomers with the idea that the ’60s achieved it all,” she says. “Both culturally and politically, and that we’re all living in the legacy of the civil rights era.”

As soon as she saw the footage of Riotsville, a story not necessarily hidden but forgotten, she realised there might be a new narrative to explore. “Seeing the footage felt like a very loaded set of images. [I felt that if] I could crack them, it would be the key to understanding a lot about American history and the legacy of the ’60s,” she says. “A way of visually understanding, or having access to, the way that the state thinks about protesters and Black radicals, as well as exploring the contradictions of the decade and trying to understand that the ’60s failed us in some way.”

No information was really known about Riotsville, so it’s been a six years-in-the-making project to piece it all together. “We started by taking screen grabs of names from the slates and just cold-calling,” Pettengill says. “Then we figured out which battalion was involved and tracked those people down through Facebook. We probably did 30 to 35 interviews in trying to understand what Riotsville was about.”

However, it became clear that the faded memories of ex-military were not the strongest basis for the film, but the extensive footage itself. So instead, Riotsville, USA combines this government-shot footage and newsreels, along with a narrative voiceover written by Tobi Haslett, narrated by Charlene Modeste and with an eerie synth score from Jace Clayton. The result captures “the formation of a national consciousness obsessed with maintaining law and order by any means necessary”.

The rollout of money to effectively militarise the police would, in today’s terms, be around $3 billion, according to Pettengill. Given this was specifically a response to Black civilians and protesters – or “hardcore professional agitators” as they were labelled – the film asks larger questions around police reform and racism that carry a heavy parallel to what we see unfolding today.

“What does police reform mean?” asks Pettengill. “One interpretation is that it is a way of investing a ton more money, budgetarily, into a system that is based on criminalising people for the failures of the state in terms of inequality and basic standards of living. It’s a way of pouring in a tremendous amount of resources that were unprecedented up until this point – because the federal government was meant to stay out of policing.”

The film deliberately steers clear of well-worn footage of civil rights protests because, for Pettengill, they have helped skew the view of the 1960s that she is looking to reframe. “I started the project by saying I’m not going to use any of that footage,” she says. “I didn’t want an inch of it. That footage was absolutely used to justify a lot in the ’60s, and in the present, to justify increased police budgets and a crackdown on Black citizens.”

She continues: “There’s this familiarity with that footage that captures the point of rupture but it does not show the lead up to anything. It does not show any context because it makes for a better photograph than the long hard process of people fighting for rights.”

It’s a film that starts with a promise of hope, at a moment when institutional racism in the US was brought to light in a government-issued report known as The Kerner Commission. But hope dwindles when nothing is done about the report, and what we watch unfold feels like a blueprint for the militarised policing taking place in America today.

However, for Pettengill, there are some positives. “I do feel optimistic,” she says. “At least by recording the way something is constructed, it reveals to younger generations that this has all happened before. These tactics have existed before, and so we’re in a continuum. What I find really empowering is that it’s all constructed and, thus, can be deconstructed.”

Riotsville, USA is screening at the ICA on 7 May as part of the Frames of Representation festival.

Linkedin
RELATED ARTICLES
OTHER ARTICLES
Following the announcement of an 80% hike in the energy price cap from 1st October, crowds gathered outside the offices of energy regulator Ofgem to protest and declare their intention to undertake a payment strike.
A group of young Palestinians have found temporary freedom in the act of parkour, reimagining wreckage and ruins as a series of high-octane playgrounds.
Birdy Chu reflects on documenting the historic moment in which the territory was formally passed back from the UK to China.
Rhiannon Adam spent three months capturing an ageing society wracked by division, isolation, and the aftermath of scandal.
The idea that a younger generation is abandoning work has become a popular narrative online, but it doesn’t necessarily reflect reality.
Financial turmoil is pushing people who work in the sex industry into more dangerous and desperate situations as a means of survival.