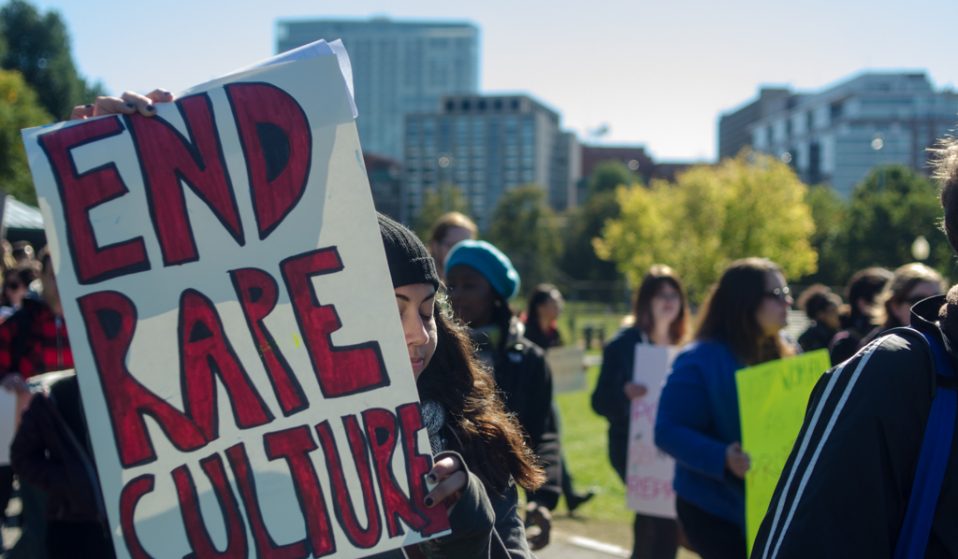 Why has there been a failure among some leftist groups to look inwards at the cultures they may be perpetrating?

Isolated incidences of rape culture threaten the very ideology that unites activists and the building of a better society. Why then has there been a failure among some leftist groups to look inwards at the cultures they may be perpetrating?

When Anna* was 20 years old, she began dating a member of the Socialist Workers’ Party (SWP), and eventually became a member of the group herself. At the time, she was unaware of the scandal involving the SWP’s former National Secretary Martin Smith (also known as Comrade Delta), who left the party in 2013 following several rape and sexual assault accusations raised against him. The incident led to the resignation of over 700 SWP members, and those who remained were adamant that there had been no such wrongdoing on Comrade Delta’s part.

For many members like Anna, the SWP was no longer a safe space for women. The truth was clear: a group that fundamentally poses a threat to women is ultimately irreconcilable with the progressive ethos that the party uses to market itself.

“When I brought it up with the guy I was dating, he turned really nasty,” Anna explains. “He started harassing me and bombarding me with sources about why the woman who’d come forward wasn’t to be trusted.” This was happening while Anna was living in Newcastle, and she’d often run into the same faces at demonstrations in the city. “I had to stop going to protests because I knew I’d get cornered to talk about the SWP.”

Founded on ideologies of anti-capitalism and the eradication of any socio-political hierarchy, radical leftist groups are, for many marginalised peoples, seen as safe spaces to envision a better, more egalitarian world. A tantalising promise, filled with excitement. However, for some young activists like Anna, the experience of joining these groups is anything but.

When prominent members of left-wing activist groups are revealed to be perpetrators of abuse and violence, survivors report receiving mixed support from fellow activists. Although this issue represents a small minority within leftist groups, its presence threatens the very ideology that unites activists and the building of a better society.

One of the main issues, as experienced by Anna, is an outright denial of any abusive behaviours by perpetrators and their supporters. Sarah M. Hanks explores this in Restoring Solidarity: “Accountability” in Radical Leftist Subcultures, writing that while an “activists’ argot includes reflexivity and privilege… admitting fault and committing to change is not in our cultural repertoire”.

Like Anna, Kit*, 28, was introduced to the anarchist activist group she became part of – which she asked to keep anonymous due to how small the group is – through her boyfriend. She soon realised that her boyfriend and his friends – also members of the group – had been exploiting many leftist concepts to justify their own toxic behaviours.

Of the abuse she was subject to by other members, Kit says: “I said that I didn’t consent to polyamory or threesomes and was subsequently called ‘queerphobic’. I was repeatedly called a ‘fucking liberal’ and shamed for working six days a week and not being ‘anti-capitalist’ enough.

“I was told to tolerate extreme verbal abuse from my partner because not doing so would be ‘ableist’ (he had been tested for autism and didn’t qualify for a diagnosis). Calling an ambulance for someone mentally ill was dubbed an ‘unforgivable act of violence’. It seemed that anything I did or said to establish agency was turned into a sign that I wasn’t ‘left enough’,” Kit explains. “As far as I was concerned, they weren’t leftists, but simply using the philosophy to validate themselves in an exceptionally twisted way.” Kit subsequently decided to end things with her boyfriend, and withdrew from activism completely.

As a teenager, Alice*, now age 24, similarly became involved with an anarchist activist group – the name of which she asked to keep hidden – when she began dating one of its members. “One of the reasons it took me so long to realise how abusive my ex was was because of how seemingly ‘progressive’ he was. He would talk non-stop about wanting to fight transphobia, ableism, and social inequality, and the abuse behind closed doors didn’t align with this perception of him,” Alice recalls.

This phenomenon could perhaps be seen as an elaboration on what writer Serena Smith dubs as ‘wokefishing’. She writes that “a wokefish may at first present themselves as a protest-attending, sex-positive, anti-racist, intersectional feminist,” but in reality, is “catfishing, but specifically with political beliefs”. However, these incidences of rape culture in radical leftist subcultures are not necessarily the result of deliberate wokefishing, but rather, a result of the cognitive dissonance between ideology and praxis.

Nearly two years into her relationship and affiliation with radical leftist circles, Alice began to worry she was being psychologically abused by her partner – something that had also been raised to her by other members of the group. Alice’s ex-boyfriend was eventually expelled from the group after admitting to a history of raping and domestically abusing other women and refusing to make amends, or participate in an accountability process.

After her ex-partner was expelled, Alice had difficulty coming to terms with how two members of the group, Tom*, along with his partner, had encouraged and perpetuated the abusive behaviour towards her and still remained friends with her ex-partner.

“I would still have to attend organising meetings with Tom, even one on the subject matter of feminism,” Alice says. “When you can’t even challenge those in your own life for their complicity in abuse, how will you go about tackling other systems of oppression? It felt pointless.”

As a result, the group began to feel unsafe for Alice. She noted that “the experience had been wholly disillusioning,” and that she had long lost faith in the criminal justice system to do its due diligence by way of convicting perpetrators of sexual and domestic abuse. The promise of social transformation that the group once offered her dwindled.

Of course, leftist organisations are not immune to the systemic issues that plague survivors such as victim-blaming, DARVO (the act of denying allegations, attacking the victim, and then reversing the role of victim and offender), along with a likely cohort of abuse enablers ready to defend the perpetrator. As anarchist archival platform Libcom’s “a critical analysis of rape culture in anarchist subcultures” notes: “a perpetrator who refuses accountability is often enabled by a similar social network”.

Indeed, these incidences of gender-based violence in radical leftist groups would seem antithetical to the very ideology that unites such groups together. The Libcom article also questions how it is that the anarchist community is founded upon a principle of “opposition to domination”, yet often fails to tackle interpersonal violence in such circles.

Many leftist groups, however, are looking to tackle incidences of rape culture. As Rebecca Winter points out: “asking a perpetrator to leave an organisation or political space on the word of a survivor is often a point which divides people within the left. We have to remember that people are not entitled to be involved in our political spaces.” Groups such as Philly Stands Up are committed to facilitating survivors of sexual and domestic abuse within the anarchist scene, focusing on a victims-first approach and taking a no-nonsense approach to perpetrators of abuse.

Ultimately, the future of leftist activism is dependent on the ability of members to hold themselves and their peers accountable. When ‘safe’ places welcome abusers, it actively excludes their victims. In the fight to eradicate systemic inequality, it is crucial, then, that leftist groups first look inwards at the cultures they may be inadvertently fuelling.

Linkedin
RELATED ARTICLES
OTHER ARTICLES
With skyrocketing rents, packed out viewings, bidding wars and more, renting in London has never been harder.
Cindy Campbell recounts how her brother ushered in a new era of musical culture at a party she held in the Bronx in ‘70s.
A 37-year-old woman shares how her abortion led her to become a clinic worker, and the abuse she’s received in that role.
Following the announcement of an 80% hike in the energy price cap from 1st October, crowds gathered outside the offices of energy regulator Ofgem to protest and declare their intention to undertake a payment strike.
Financial turmoil is pushing people who work in the sex industry into more dangerous and desperate situations as a means of survival.
As the Scottish government announces a rent freeze, an activist with Living Rent who fought and won shares how they did it, and what must come next.