News & Politics / Why more young people are turning to nihilism 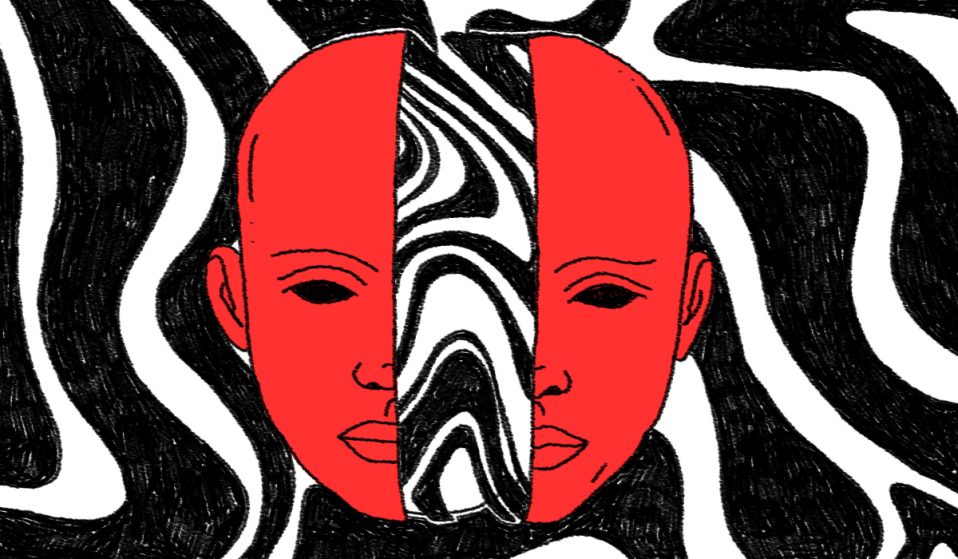 Amid rising inequality and the climate crisis, the belief that life is meaningless is gaining traction.

Amid rising inequality and the climate crisis, the view that life is meaningless is gaining traction. But can believing nothing matters also be a catalyst for positive action?

About a year ago, while the UK was in lockdown, Luke* discovered nihilism through a philosophy channel on YouTube. He soon began to subscribe to the belief central to nihilism, which is that life is meaningless. “I think nihilism is necessary for a true life,” the 15-year-old student tells Huck. “We are thrust into this universe for no apparent reason.”

Adopting nihilistic beliefs made Luke feel alienated and suicidal. “The concept that nothing matters can be very depressing,” he says. He became demotivated and misanthropic. Luke recognises that misanthropy – the general hatred for humanity – is a bleak concept but, he argues, it’s hard not to be “when you see how morally corrupt we all are, and the damage we are doing to the planet”.

Despite this, Luke maintains that “the nihilistic mentality is incredibly freeing”. “It resonated with me, particularly because I don’t like school much, so it proved I didn’t have to give much of a shit about it as all of us amount to the same nothing – no matter how successful or how hard we try,” he explains. “I also don’t sweat the ‘little’ shit. If someone bumps into me in the hallway – so what? If I’m trying to cross a road and there’s a bunch of cars so it takes a while longer – so what? If I lose some money – so what?”

For Luke, this indifference extends to politics. “With how our world’s governments are run, I find it hard to give a shit. So I don’t,” he says.

It’s understandable that people want to turn away from the harshness of reality. Young people are growing up in a world of rising costs, stratospheric rents and stagnant wages, with inequality only deepening. They live in fear of a climate crisis that threatens their very future. All of this felt in the shadow of a global pandemic which, according to a recent study by the Prince’s Trust, one-fourth of 16-25-year-olds in Britain feel they will “never recover” from emotionally. 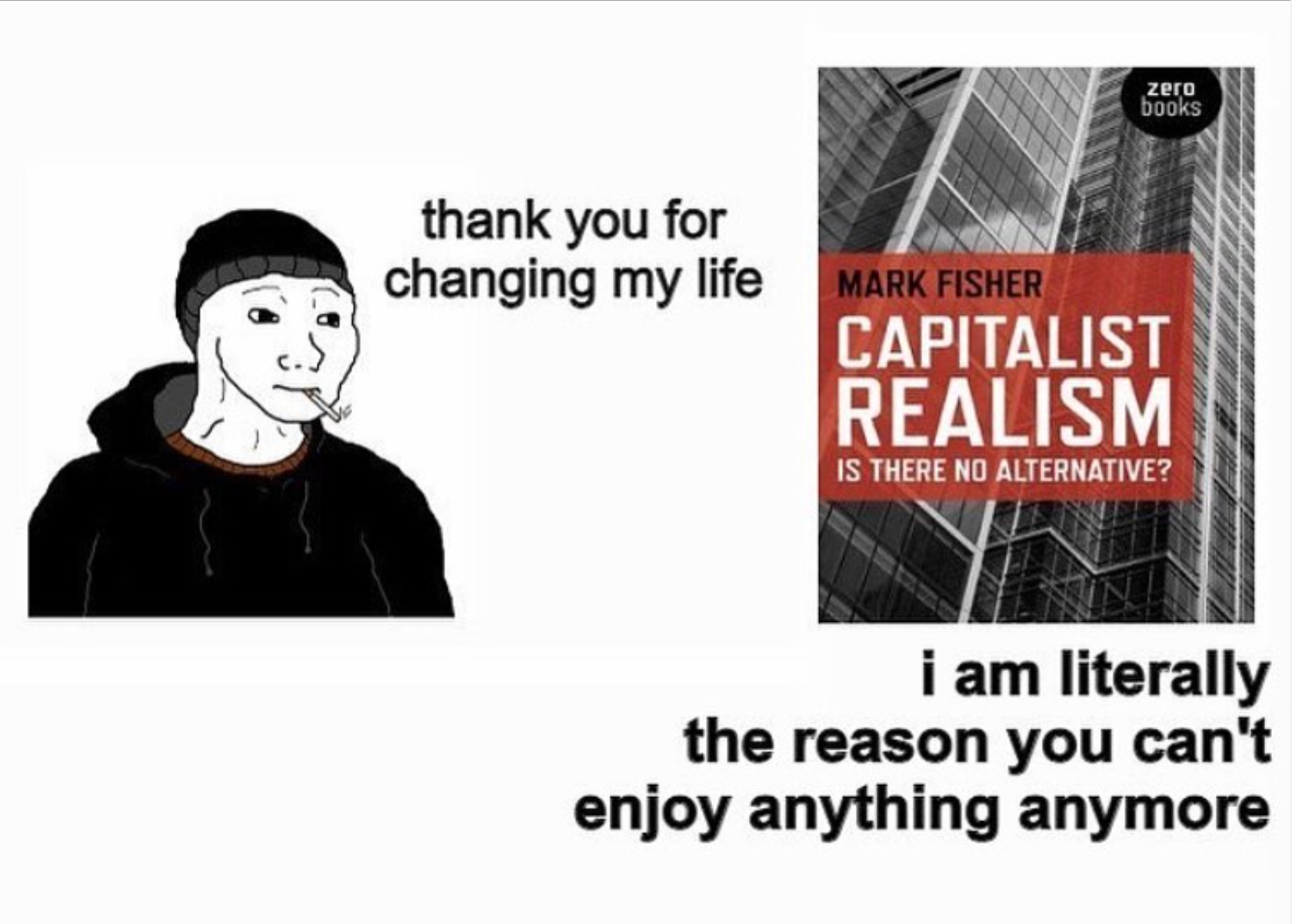 The barrage of bad news can push young people like Luke into pessimism. “I don’t have much hope for the [human] race’s future,” Luke says, “not when you see what’s going on today, for example, with Russia and Ukraine, Islamic persecution in China, technology promising connection but making us feel more disconnected, and animal extinction. I think the state of the world will drastically affect the way young people perceive human existence. ”

While suffocating under the daily drudgery of capitalism, visions of a brighter future can feel like a utopian fantasy. Nihilism becomes a way to cope with reality. It makes sense, then, that the subreddit r/nihilism grew from 31,000 members pre-pandemic in January 2019 to 115,000 in April 2022. Different interpretations of nihilism are discussed on the sub but for many, the sentiment is bleak. If nothing you do matters, why bother doing anything? Why get out of bed in the morning, bother with school work, work, or have goals at all?

Connor Eaton, a 26-year-old from Canada, knows this feeling all too well. His parents divorced when he was 20, leaving him with an overwhelming sense of meaningless. As he puts it: “We are all just little grains of sand on a seemingly infinite beach.”

These thoughts became more frequent over the next six years. He stuck it out at college, but only so he could continue searching for the meaning of life. “I felt alone in the universe… I drank a lot and smoked weed, trying mushrooms and other drugs to alter my mental state as a way to feel something that wasn’t universal doom and gloom,” he explains. “Eventually, in 2020, I got into philosophy and stumbled upon the term nihilism.” Now, Connor had an answer to his existential questions – albeit an unsatisfying one.

The dread that Connor felt became collective during Covid-19, with psychologists stating it “revealed core existential fears and altered… lives in profound ways”. As a deadly virus spread across the globe, the murder of George Floyd by a white police officer sparked urgent Black Lives Matter protests in the US and UK. The seemingly endless examples of corruption, inequality and injustice that followed 2020 brought questions of ‘why are we here?’ and ‘what’s the point?’ to the fore.

Of course, this thinking predates the Covid-19 pandemic. The German philosopher Friedrich Nietzsche warned of nihilism when he wrote that “God is dead” in 1884. He believed the Enlightenment had killed the idea of God as the source of all morality, value, or order in the universe. This, he thought, would cause Europeans to spiral into a catatonic nihilism.

In 2022, this fear is realised most poignantly in climate nihilism, or the idea that the planet is doomed, so why bother trying to save it? Such fatalist attitudes are understandable: almost daily, the news pings with another sobering warning or evidence of climate catastrophe. Eco-anxiety (the chronic fear of environmental doom) is surging among young people. Compounded by the ignorance and inaction of world leaders, mass extinction, declining health and major climate disruption are now part of our daily reality.

Franciso Jarpa, a 22-year-old student from Mexico City, sums up the climate nihilist perspective when he says: “Why would I stop eating meat when the impact I make on the environment is practically nothing compared to the big polluting companies?”. Jarpa, who learnt about nihilism in a philosophy class, believes that whatever you do with your life won’t matter in the big scheme of things, so why worry? It’s one big philosophically-mandated shrug. “I’d rather eat my steak now than regret it in a few years when there are no more cows left,” he says.

This apathy is both bleak and dangerous. But can believing nothing matters also be a catalyst for positive action? Australian writer Wendy Syfret thinks so. While the 34-year-old recognises that being faced with the idea that our lives, and everything we do with them, are insignificant can be “destructive”, she also believes that it can result in a “pretty radical decentralisation of self”.

She continues: “If you have been forced to recognise that the things you thought were going to promise you a good life aren’t available anymore, you look beyond yourself to protect something bigger.” For Wendy, this led her to climate action.

In her book, The Sunny Nihilist: How a Meaningless Life Can Make You Truly Happy (2021), Wendy argues that nihilism can provide a balm for modern hyper-individualism and an obsession with finding meaning in everything, from our jobs to our skincare routine. The philosophy of ‘sunny nihilism’, she wrote, offers “a blank page; a chance to enjoy the moment, the present, the chaos and luck of being alive at all”.

Wendy thinks that, rather than surrendering to nihilism, we should focus on Nietzche’s view that rules, laws, and morals are social constructs. “That can be a very liberating idea, because you can ask, well, why do we take capitalism to be the absolute truth?” Wendy says. “The reality is, the world is total chaos, and everything you think you know is a construct that someone created, and can be dismantled.” This has helped Wendy break out of productivity culture. “[Sunny nihilism] gives me a framework to pause and ask: do I actually want to be doing these things? Or am I just absorbing a narrative of success that’s ultimately treating me like a worker drone?”

For Connor, the pessimism that clouds nihilism pushed any other interpretation out of reach. He went to therapy in January 2021 believing he was suffering from existential depression. He was diagnosed with ADHD. “My attitude changed and I embraced the philosophy of stoicism (a belief in logical reasoning) because it put purpose back into my life,” he says. “It taught me to love and connect again after I had been consumed by nihilistic views.”

Also exhausted by nihilism, Luke shifted to absurdism: an acceptance of the chaotic miracle of human existence. This new mindset has helped Luke feel more connected with nature. He now picks up any litter he finds and doesn’t kill insects. “It doesn’t matter to me that it will all return to nothingness eventually. It exists simultaneously with my existence, and I get to climb trees, run about and swim, all thanks to the earth,” he says. “Human existence is beautiful, even if it’s all for nothing.”

Nihilism is not a ‘how-to’ book for living life, but a concept that can either lead you down a path of despair or liberation. There may be no inherent purpose, no grand design leading to something bigger, but by some random miracle, we are all here. So we might as well make the most of it.

Linkedin
RELATED ARTICLES
OTHER ARTICLES
Whether it's partygate, the climate crisis or the spiralling cost of living, the fightback begins on the picket lines writes Tommy Vickerstaff
Proposals to introduce a minimum GCSE threshold for student loans will disproportionately affect those from marginalised backgrounds.
A new edition of a seminal book brings together iconic images of the band onstage in their full glory and backstage in moments of unguarded camaraderie.
Photographer Arthur Grace recalls travelling through the Soviet Bloc and finding ways to evade the surveillance of his work.
With inflation now at a 40-year-high of 9 per cent, demonstrations organised by TUC took place to demand action from the government.
Writers Gracie Mae Bradley and Luke de Noronha take on the callousness of borders, arguing for a world beyond them.