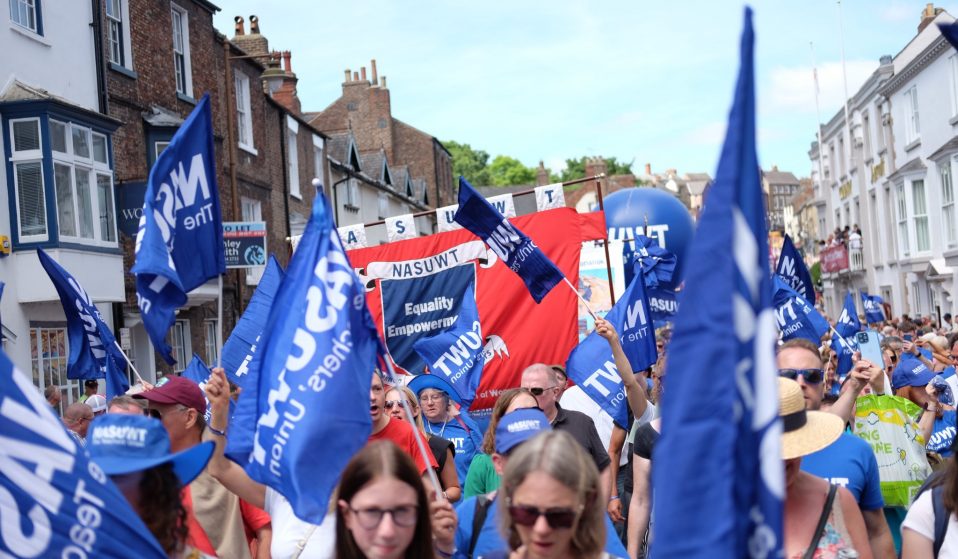 With the education sector at a breaking point, many teachers feel they have little choice but to take industrial action.

The education sector is at a breaking point. And now, amid a cost of living crisis, many teachers feel they have little choice but to take industrial action, reports Nadeine Asbali.

As we’re plunged into a winter of discontent, schools are headed for a perfect storm. Rising energy bills, ongoing salary disputes and a burgeoning retention crisis has brought the sector to a breaking point. With some teaching unions (such as the NEU) reporting up to 86 per cent ‘yes’ responses in preliminary votes for industrial action, many teachers are now gearing up for the likelihood of strikes this winter.

As a teacher, I know taking time off is never easy. There’s the worry about the impact on your students’ learning, and the catching up to be done once you’re back. But many teachers feel as though they’ve been left with no choice, and that change needs to happen now in order for the education sector, and its workers, to survive.

Jumana* has been a primary school teacher in Essex for ten years, and despite it being a job she loves, she has come to associate her decade-long career with being “overworked, underpaid and stressed”. More recently, the pressures have become insurmountable. “I didn’t sign up to teach 35 to 45 pupils per class due to insufficient staff numbers and slashes in our funding,” she says. Jumana is already living on a salary which she describes as having “barely improved in a decade”.

As the cost of living soars, Jumana says it’s becoming impossible to stay afloat. On top of this, a lack of resources at her school means she’s had to stock up on pens and snacks for her class with her own money. “I didn’t think I’d be buying resources with the money I need to feed my own family,” she says. “It is always teachers, and our own families, who have to pay the price for government cuts in education”.

A 5% pay award is unacceptable.

You need & deserve a pay award which will enable you to weather cost-of-living pressures & which begins the process of restoring the real terms value of your pay.

Back the ballot for a #betterdealforteachers.

Wages aren’t the only issue. The recruitment and retention crisis is worsening, and the government’s efforts to tackle this have proven largely unsuccessful. Their Return to Teaching scheme (which sought to tempt ex-teachers back into the classroom) managed to recruit a measly 23 physics teachers in two years. In fact, almost half of all teachers plan to leave the profession within five years. I have lost count of the number of teachers I trained with who have now left for pastures new – and better paid – despite desperately wanting to stay in teaching.

Disillusionment stemming from poor working conditions and a lack of support for teachers is a common picture in schools across the country. Teachers, like nurses and care workers, remained at the coalface during the pandemic. Schools like mine, serving deprived and neglected areas, adapted quickly to continue to educate our pupils, while also offering many of the vital services that the government failed to, such as free meals, resources for home learning and pastoral support for whole families. Teachers invested in equipment to make online teaching smoother out of their own pockets and schools shelled out for laptops when families couldn’t afford to. And despite this, what is the recompense for teachers? A real-terms pay cut of as much as 14 per cent between 2010 and 2023 for some.

Retention issues serve a serious blow to pupils who lose out on experienced and educated practitioners, affecting their life chances beyond the classroom. For already disadvantaged students, this can be catastrophic. But poor retention also impacts teachers like Emily* who are forced to pick up the slack for an ever-dwindling workforce. “This half term, I’ve had to cover at least two lessons a week on top of my own packed timetable without being compensated because my school simply cannot find more science teachers,” she says. The physical and mental strain of this is clear from Emily’s voice, as she speaks to me after a day of back-to-back teaching. “This just feels unsustainable now. Something’s got to give, and it will be the sanity and health of individual teachers unless the government steps in.” Despite worrying about the impact it’ll have on student’s learning, she feels she has little choice but to strike this winter.

The crisis of rising energy bills is having a compounding impact in school. Many of the UK’s children are taught in large, old and crumbling buildings with poor insulation and colossal amounts of energy required to keep classrooms somewhere above freezing. As bills skyrocket, headteachers are facing energy tariffs that are up to fives times higher in some cases. After months of mounting pressure from education leaders and unions, the government agreed to six months of support for schools to offset some of these energy costs. But with budgets already so strained, headteachers have warned that this does not go far enough.

Amelia*, an assistant principal in the Midlands, says that the energy cap will not address the scale of the crisis. “Schools set their budgets far in advance and thanks to the legacy of austerity, the impact of the pandemic and an unfunded pay rise which lumbers schools with all the extra cost whilst still not bringing teacher salaries in line with inflation, budgets are tight as it is,” she says, adding: “We need more reassurance that we will be able to keep out of the red next year too.” Although her role in school makes it difficult for her to outwardly support strike action, she privately expressed her desperation for change.

"If we were to ask our politicians to step into our shoes for a week, let alone a day, I'm sure they would very quickly realise how underpaid we are."

If you agree with Sarah that we need a #betterdealforteachers on pay vote YES YES in our ballot.

Amelia continues: “In our school, we have teachers leaving in droves, support staff who can’t afford to eat because their salaries are so low and as always it is the children who are suffering the consequences. We’ve had to cut extra-curricular clubs. We’ve condensed our subject offer because we just don’t have the staff. We’ve had to limit the number of pupils we provide support to for things like uniform and even extra food. The situation is dire.”

Anyone in teaching is familiar with the mantra “we’re not in it for the money” – and perhaps that’s true. But as public-sector workers, it can feel like we’re expected to survive on nothing but a feeling of job satisfaction and altruism, nourishing our bodies with positive feedback and paying our bills with impressive exam results.

The reality is that, of course, we have rent to pay and stomachs to fill too, and as the price of heating our homes and keeping the lights on sky-rockets, it’s becoming impossible for some teachers to remain in the profession. If things continue as they are, swathes of my fellow teachers will turn their backs on the classroom for good, and the next generation’s children will suffer as a result. Industrial strikes is now the only option for teachers to bring about the change our sector so desperately needs.

Linkedin
OTHER ARTICLES
A new exhibition is marking the photographer’s 100th birthday with a look back at his extraordinary career.
Ireland’s national sports are modernising. At the forefront of this movement is Na Gaeil Aeracha, the country’s first ever queer GAA club.
A new documentary tells the story of an unassuming cul-de-sac of 13 timber framed houses built by Fusions Jameen – London's first Black housing co-op.
How the sounds of nature, air force bases, walking across the country, Windrush and synthesisers have influenced one woman’s journey through music and life.
Alternating between colour and black-and-white, the photographer chronicled sexual liberation, economic crises and the repercussions of the war in Vietnam.
We sat down with trans comic Jordan Gray to discuss the power of portraying complex characters, giving humanity the benefit of the doubt and getting naked on live TV.