News & Politics / Why the Wages for Housework Campaign is still vital 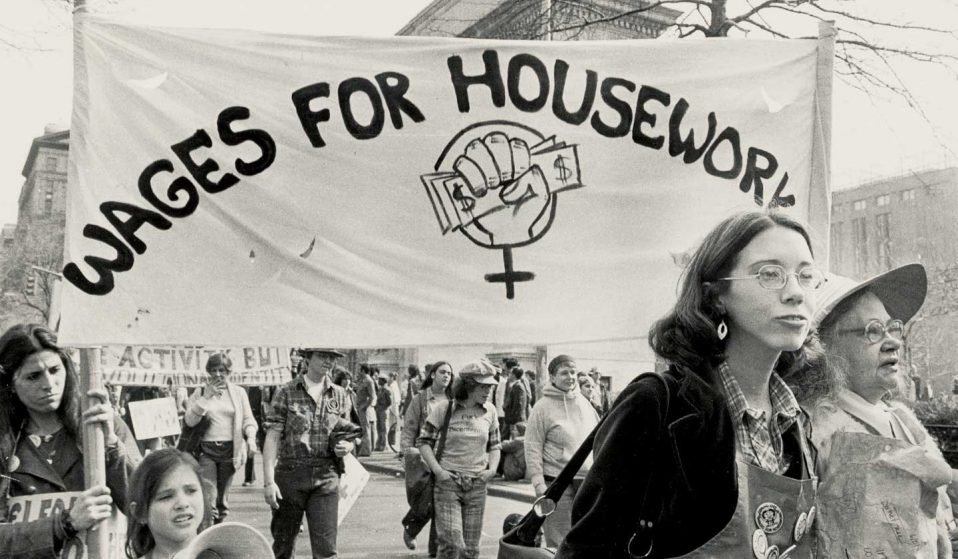 50 years since its inception, and the campaign calling for recognition that capitalism depends on domestic labour is as pertinent as ever.

50 years since its inception, and the campaign calling for recognition that capitalism depends on domestic labour is as pertinent as ever, writes Adele Walton.

“A woman’s home is not her castle. It is her work place. But a workplace we pay rent for!”

This quote was printed on a leaflet from the New York-branch of Wages for Housework – an internationalist campaign that emerged in 1972 with alliances across America, Italy, Canada, the UK and more. This year marks the 50th anniversary of the movement, which called for universal recognition of unpaid labour that takes place in the home – whether that’s cleaning, cooking, looking after children or doing laundry – arguing that this work should be remunerated with a wage. In arguing for a wage for housework, the campaign highlighted that this labour takes form as a gendered burden for women, and the ways in which the home is a site of unseen and unvalued labour, and therefore exploitation.

Today, in the context of a global cost of living crisis, the Wages for Housework campaign is as pertinent as ever. Research from The Labour Party’s women and equalities secretary Anneliese Dodds found that the proportion of people living in relative poverty in the UK has risen by 1.5 million, with women accounting for 60 per cent of this rise. It’s clear that only an anti-capitalist feminism that recognises the intersections between patriarchy and labour exploitation can create a better world where women can reclaim their time, energy and agency.

The gender pay gap is compounded by unpaid domestic labour and its associated costs, rendering women more vulnerable to the shocks of a cost of living crisis. A study in 2021 found that women spend 40 per cent more time on unpaid housework than men. The Wages for Housework campaign was a pivotal point in which this formerly ‘invisible’ labour was made visible, bringing to light how the undervalued labour that women were doing within the home was integral to reproducing capitalism. Housework constituted not only physical labour, but also the emotional labour involved in maintaining ourselves and our loved ones, which had for too long been attributed to women’s maternal instincts as opposed to a valuable skill. Women were the workers behind the workers.

Captivating the frustrations of women across the globe, Wages for Housework revealed how as long as this labour was made invisible, it would continue to be exploited, and in calling for a wage, the campaign challenged capitalism’s ongoing exploitation of women. As noted by Silvia Federici, one of the original organisers, “The struggle for the wage is at the same time a struggle against the wage, for the power it expresses and against the capitalist relation it embodies.”

In a capitalist global economy that undervalues the labour involved in housework, this becomes institutionalised into policy and practice. Gross Domestic Product – the universally adopted measure of a country’s productivity outputs – does not measure housework, despite it being estimated that the economic value of womens’ unpaid housework globally is a whopping $10.9 trillion. It’s in this context that women disproportionately experience the burden of economic crises, and are more likely to be poor and in debt.

It is no surprise then, that during a global pandemic, almost 80 per cent of essential workers in healthcare and social services, and therefore at heightened risk of infection, were women. The pandemic revealed the vital importance of care at a time when people were falling ill, isolating and needing emotional support. In the radical essay Counter-Planning from the Kitchen: Wages for Housework – A Perspective on Capital and the Left (1976), Silvia Federici and Nicole Cox recognised that viewing the home as a site of work was key to understanding how housework “ in the absence of a wage, has always appeared as an act of love”. By demystifying the notion that housework is a natural and feminine affinity but rather a learnt skill, the Wages for Housework campaign has equipped us with the fundamental arguments that can help us fight for better labour conditions in both unpaid and paid caring roles today.

While the pandemic made this labour more visible, the effects of gender inequality were harder felt. Despite the fact that women make up 39 per cent of global employment, they accounted for 54 per cent of job losses during the pandemic. Women were at greater risk of the economic hardships caused by Covid-19 due to the gendered burden of womens’ unpaid work in the home being multiplied. For many families, lockdown meant an exacerbation of women’s work in the home, from caring for children who were doing school from home, to looking after sick family members.

Now, in a cost of living crisis, women face even greater struggles. Research by the Living Wage Foundation has shown that women continue to be disproportionately affected by low pay, with almost 60 per cent of all jobs paid below the living wage being occupied by women. Economists have come to refer to this as ‘she-flation’; the process by which women are harder hit by spikes in inflation on non-durable household goods, food and bills.

On top of this, returning home from work to a mounting to-do list is not an unfamiliarity to most women who do paid work; this phenomena is what theorist Arlie Hoschild termed “the second shift” in 1989. When neoliberal and girlboss feminism equate formal employment as empowerment, they ignore the gendered burden of unpaid emotional and physical labour that takes place in the home. Women cannot – and should not have to – simply ‘take on more hours’, as Conservative MP Rachel Maclean recently suggested, particularly when childcare costs have risen so much that one in four families are having to skip meals or heating to afford childcare.

As an international health crisis which rendered us to the four walls of our home made clear as ever, the home is a pivotal space through which we define and reproduce ourselves. The maintenance of these spaces is a laborious task, and the cost of living crisis is making this strain even more acutely felt. Indeed, recognising that housework is work is still vital if we want to address the myriad structural injustices women face.

Linkedin
RELATED ARTICLES
OTHER ARTICLES
A sharp increase in officers armed with the electrical weapon is resulting in serious injuries and deaths.
Protestors gathered outside Downing Street following the latest atrocities committed by Israel against Palestinians living in the besieged strip.
From the chip shops, to the bingo parlors and burlesque dancers, photographer Mike Coles remembers capturing scenes of holidaymakers by the English coast.
With the UK now set to run out of vaccines, people working in the sex industry – particularly outside of major cities – have been left especially vulnerable, reports Brit Dawson.
Following the release of his latest album, the rapper talks about finding a new approach to songwriting, attitudes to poverty, and why his music is more than a political statement.
A series of photos by the late Jerry Dantzic taken in 1957 show a tender side to the iconic Jazz musician.