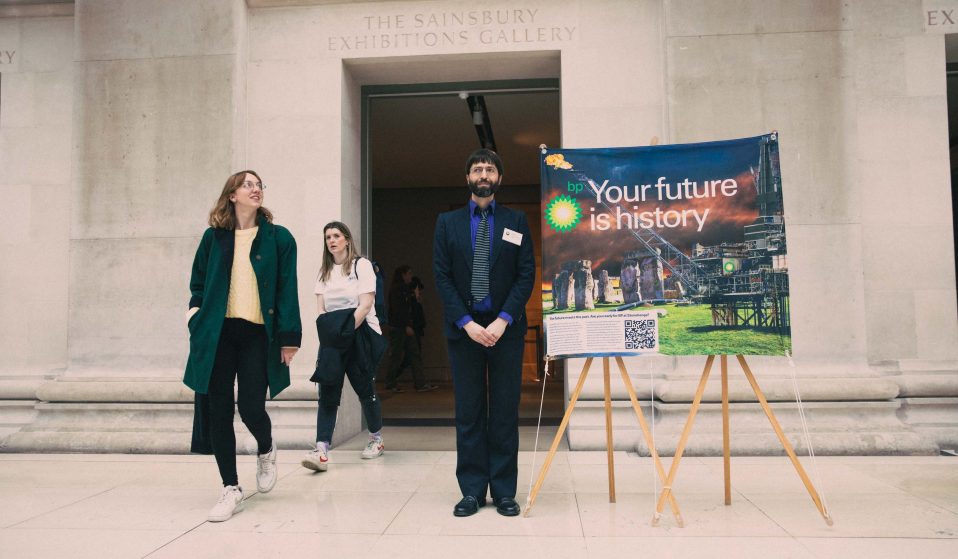 Activist group BP or not BP? are calling on the British Museum to cut its ties with fossil fuel companies.

Activist group BP or not BP? are calling on the British Museum to cut its ties with fossil fuel companies.

Last weekend (20 February), visitors attending the British Museum were met with an unexpected staged protest from activist group, BP or not BP?. It featured a fake “Stonehenge” drilling exhibition showing BP’s ‘drilling plans’. Dressed in suits, with a professional-looking banner depicting the fake scheme, the performers pretended that BP isn’t just sponsoring an exhibition about Stonehenge – it’s actually planning to drill for oil there.

It also included a label explaining that – while BP isn’t really planning to drill at Stonehenge – the idea isn’t as far-fetched as it appears, as BP’s drilling operations are causing irreversible damage to ancient cultural sites elsewhere in the world. 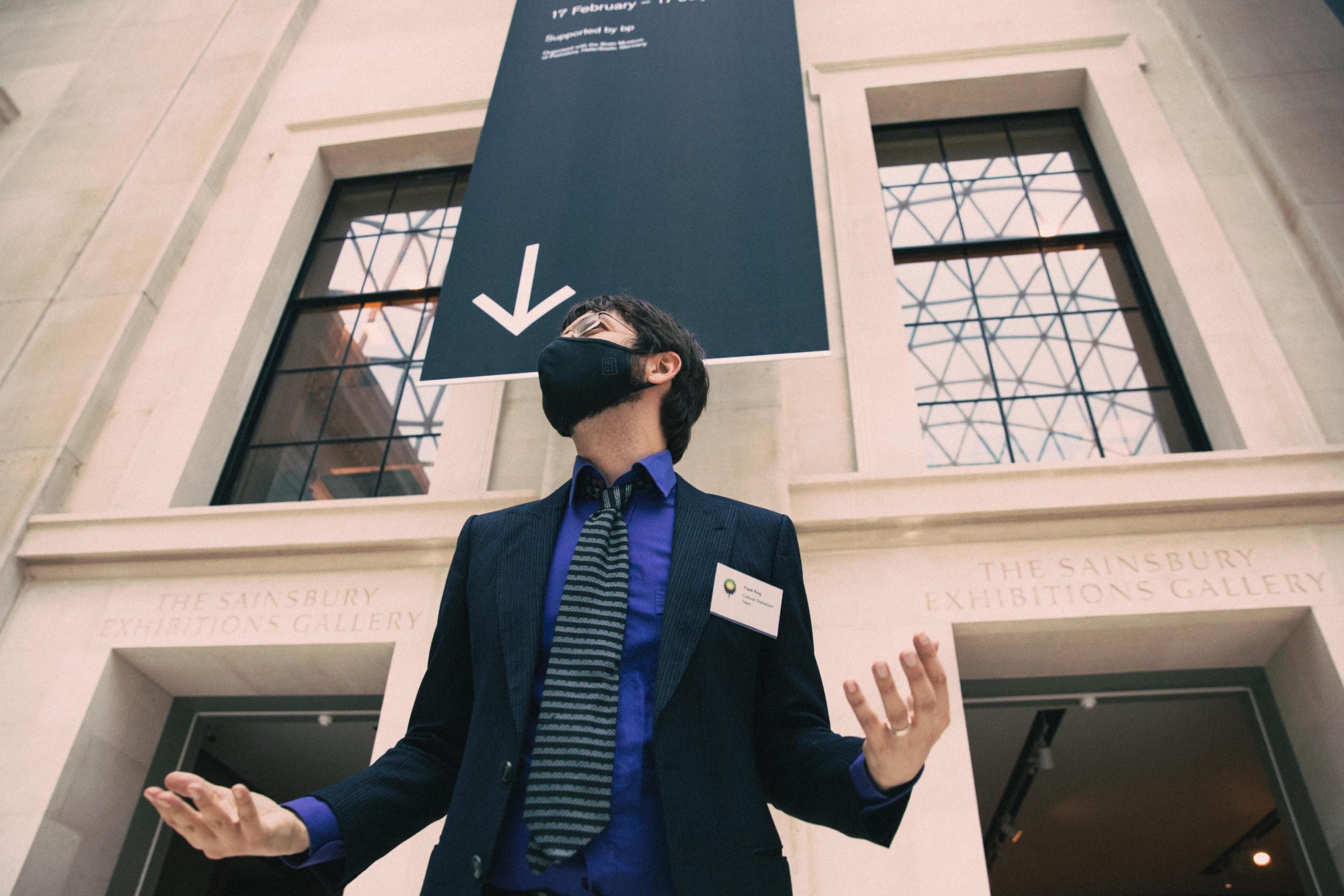 The public are increasingly unhappy with the British Museum laundering the image of an oil giant in the midst of a climate crisis, especially one that continues to push forward with risky fossil fuel extraction. This also comes off the back of a damning Channel 4 News report on the British Museum’s almost entirely unaccountable ‘Chairman’s Advisory Group’.

Not listed on the museum’s website and generally shrouded in mystery, the group is comprised of unnamed corporate leaders including heads of fossil fuel, arms and mining companies and investment banks. Each member is personally invited by Chairman George Osborne to offer ‘guidance’ behind closed doors, none of which is shared with the public. It was also revealed that museum director Hartwig Fischer is in advanced discussions with BP over renewing their sponsorship deal, despite growing public opposition and a letter from over three hundred archaeologists and historians calling on museum trustees to drop BP.

Responding to this, a British Museum spokesperson said: “bp’s sponsorship term supports our exhibition schedule, which has been delayed by the pandemic. The current exhibition is The world of Stonehenge opening 17 February 2022. As part of the current 5 year contract, bp will support one more major exhibition following Stonehenge, to be announced later in 2022.” 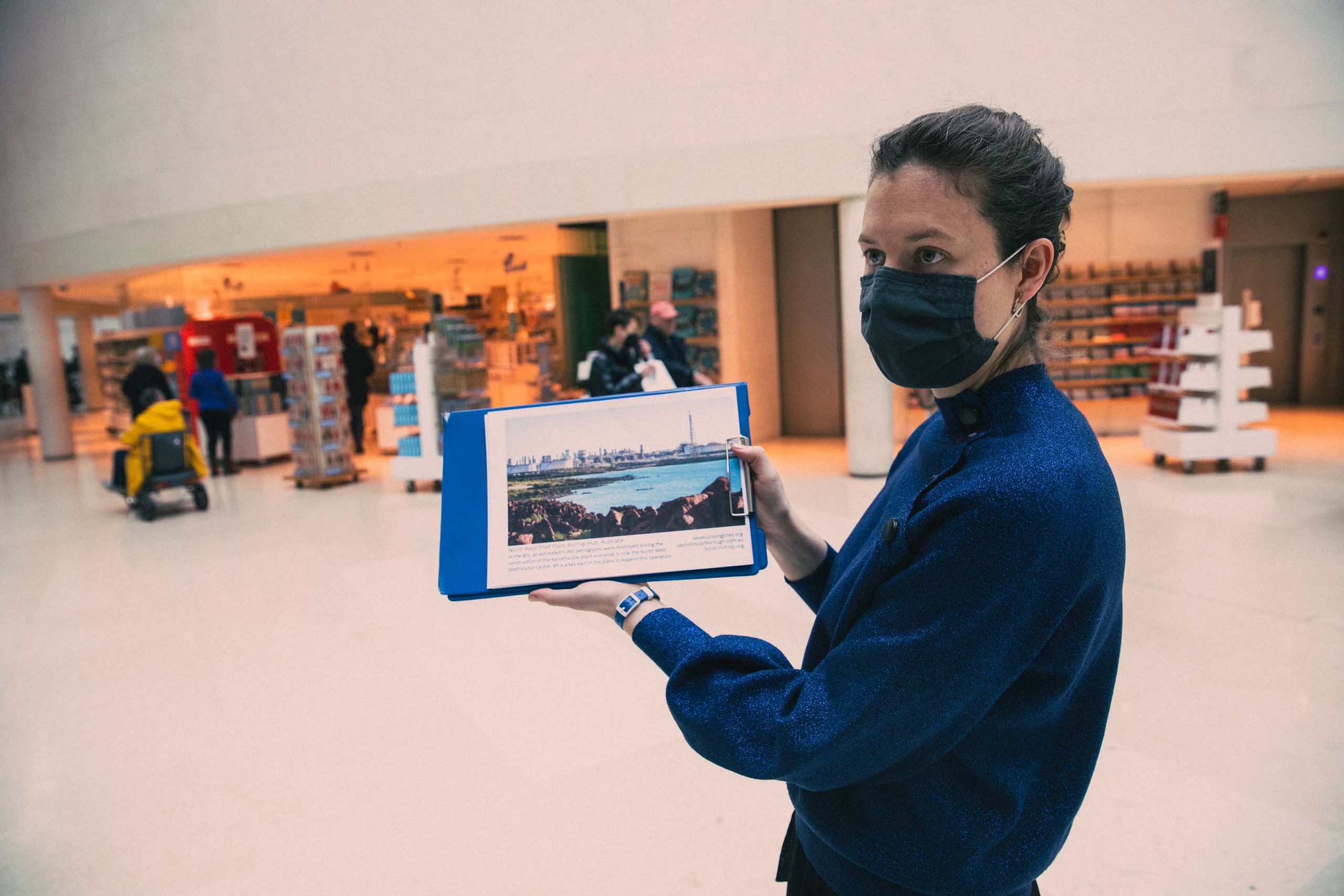 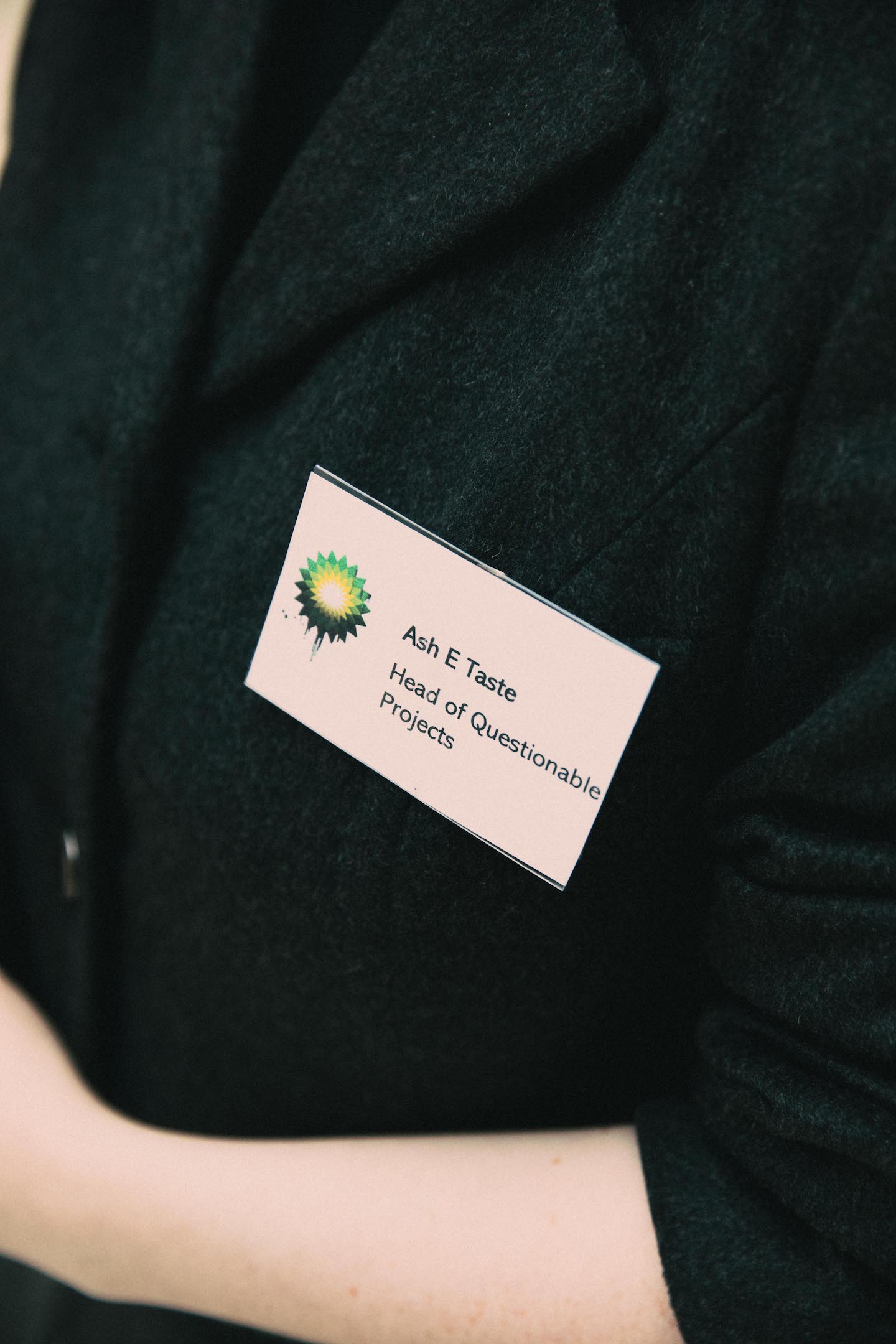 ‘Supported’ by BP and newly opened this week, the Stonehenge Exhibition purports to shine a light on the stories of Britain and Europe from 4,000BC to 1,000BC, and has received rave reviews. But there is a dark hypocrisy in BP celebrating one ancient monument while its activities are simultaneously destroying precious Indigenous rock art in Australia dating back 30,000 years or more.

In Western Australia, BP are part-owners of the huge Burrup Peninsula gas extraction project, pushing to expand the Burrup Hub LNG plant despite warnings that emissions from the project could destroy the world’s largest collection of Indigenous rock art.

The plant sits on the doorstep of Murujuga, containing over one million recorded petroglyphs (rock art), that hold deep cultural and spiritual significance to the Traditional Owners. The rock art is thought to depict the earliest known representations of the human face, capturing more than 50,000 years of Indigenous knowledge and spiritual beliefs. Not only have scientists said that Burrup Hub could destroy this art within 100 years, the expansion is also set to be the most polluting project ever to be developed in Australia if it goes ahead. A $50bn mega-fossil fuel endeavour, over its 50-year lifetime, Burrup Hub would generate billions of tonnes of CO2, helping BP destroy humanity’s history and future in one fell swoop. 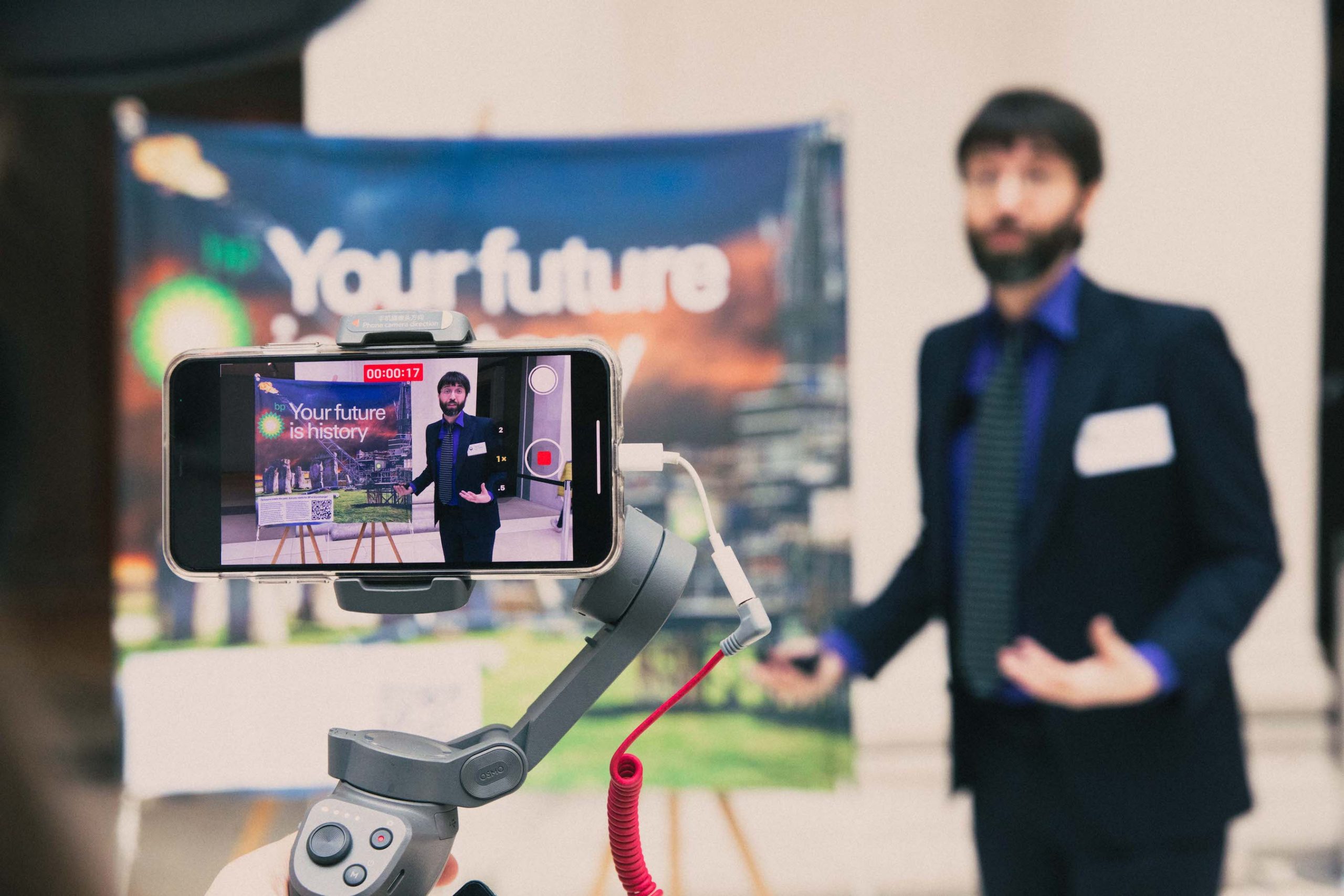 Josie Alec, a Kuruma Marthudunera woman whose cultural heritage, the Murujuga rock art, is being slowly destroyed by BP’s LNG facility, said: “We have big industry sitting on our Country every day, polluting our air, killing our animals, killing our plants and killing our Songlines. The Murujuga rock art is sacred like Stonehenge – and even older. This place is the world’s oldest creation story. BP have connections to the Karratha Gas Plant and a footprint here. They shouldn’t: the footprint belongs to the Ngurrara people.”

It should be a no-brainer for the British Museum to cut ties with BP, especially considering the widespread level of protest and opposition this sponsorship has received. But it is perhaps unsurprising that two institutions steeped in colonialism and extractivism, and a museum chairman known for callous austerity policy who secretly takes advice from corporate players, have chosen not to act.

“In considering any sponsorship, the Museum thinks carefully about the nature and quality of any offer before accepting. These decisions are taken in line with the stringent and robust requirements of our Acceptance of Donations and Sponsorship Policy. Claims that the British Museum is inappropriately influenced by any donations or sponsorship are simply incorrect.”

Perhaps the museum has simply fallen for BP’s greenwash, despite the International Energy Agency’s clear message that the world can afford no new fossil fuel projects if we want to keep global heating below 1.5 degrees and avoid the most terrifying climate impacts. Or perhaps the museum is just massively out of touch with the rest of the sector and key stakeholders, wilfully ignoring opposition from Indigenous communities, museum staff, the public, and multiple experts in the fields they claim to care about. 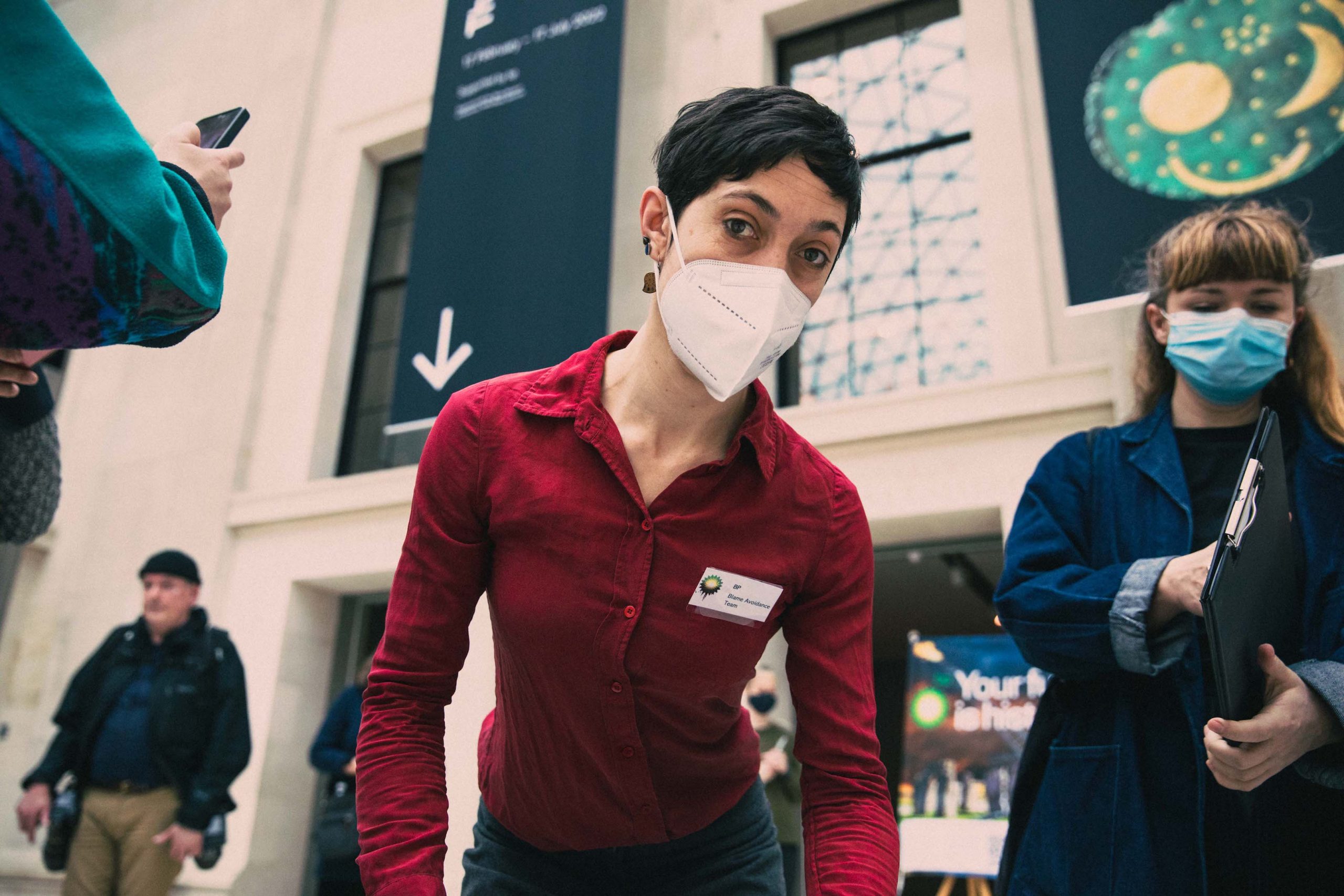 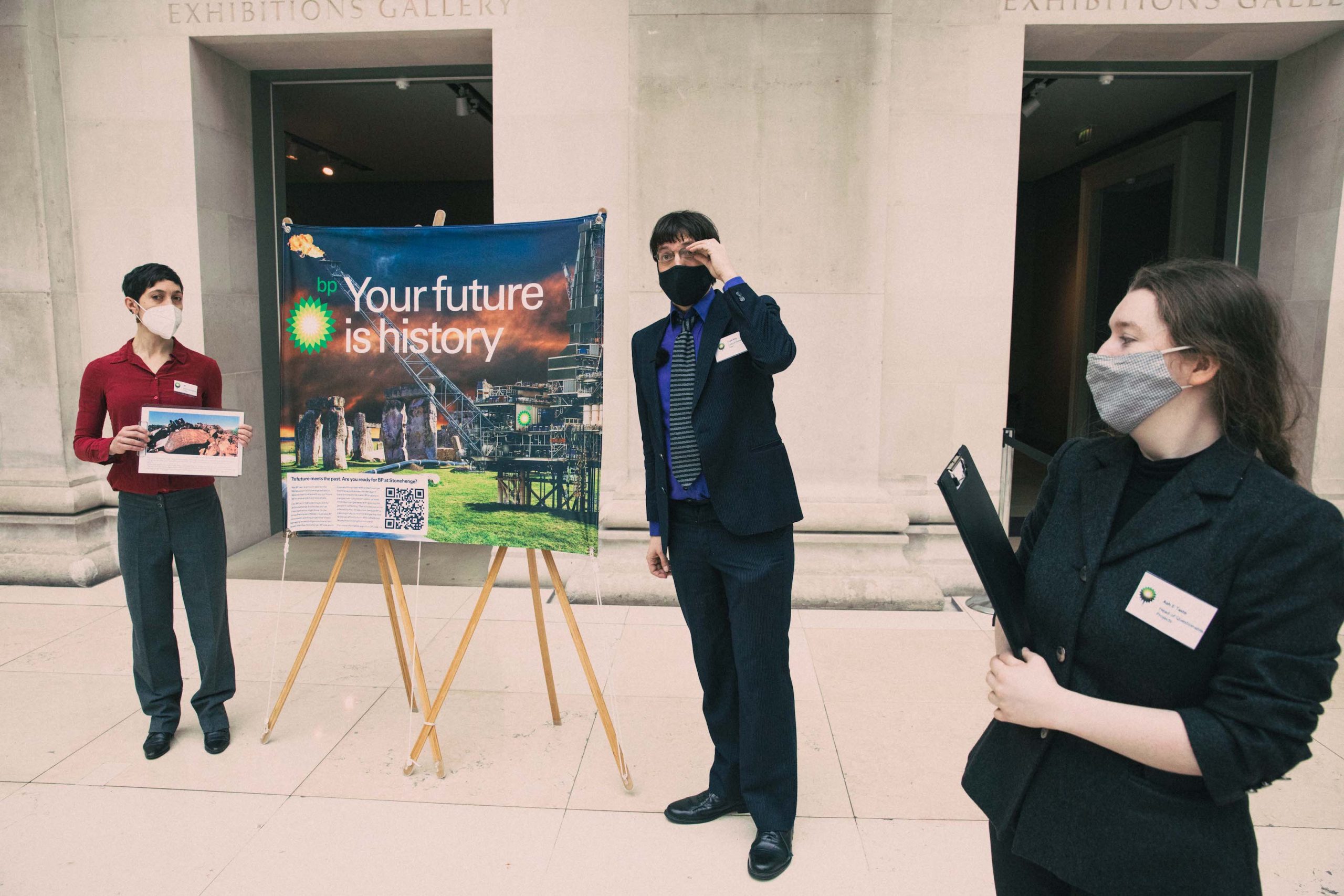 Whatever the explanation may be, BP or not BP? aren’t giving up yet. This weekend marked our 44th creative intervention at the British Museum, and it’s also one of our most urgent. It looks like the Director is preparing to sign a new deal with BP in the coming months and maybe agree on a new ‘BP wing’ as part of their $1bn redevelopment plan.

When questioned over this potential ‘BP wing’ development plan, the British Museum said: “We are developing a strategic masterplan to transform the British Museum for the future. It will involve actively renovating our historic buildings and estate including our infrastructure and galleries.

“Our board maintain strategic oversight of this important project. We are at an early stage of development, as the project develops we will be engaging with our partners, stakeholders and benefactors. We aim to secure the optimal mix of investment from public and private sources.”

In a statement to Huck, BP said: “We are not pursuing any plan such as you suggest for a ‘bp wing’.”

Meanwhile, the climate crisis is all around us, from soaring energy prices to unprecedented storms. BP is one of four companies that are responsible for more than 10 per cent of global carbon emissions since 1965. It’s well past time we let fossil fuel companies know that they no longer have a place in public life; that their social license to operate is over.

We still have time to stop this. There’s time for the museum’s Director to change his mind and reverse a staggeringly terrible decision. If other key cultural players such as the Tate, National Gallery, Royal Shakespeare Company and even Tennis Australia can drop fossil fuel sponsorship, so can the British Museum. And until this happens, we’ll keep on coming back. 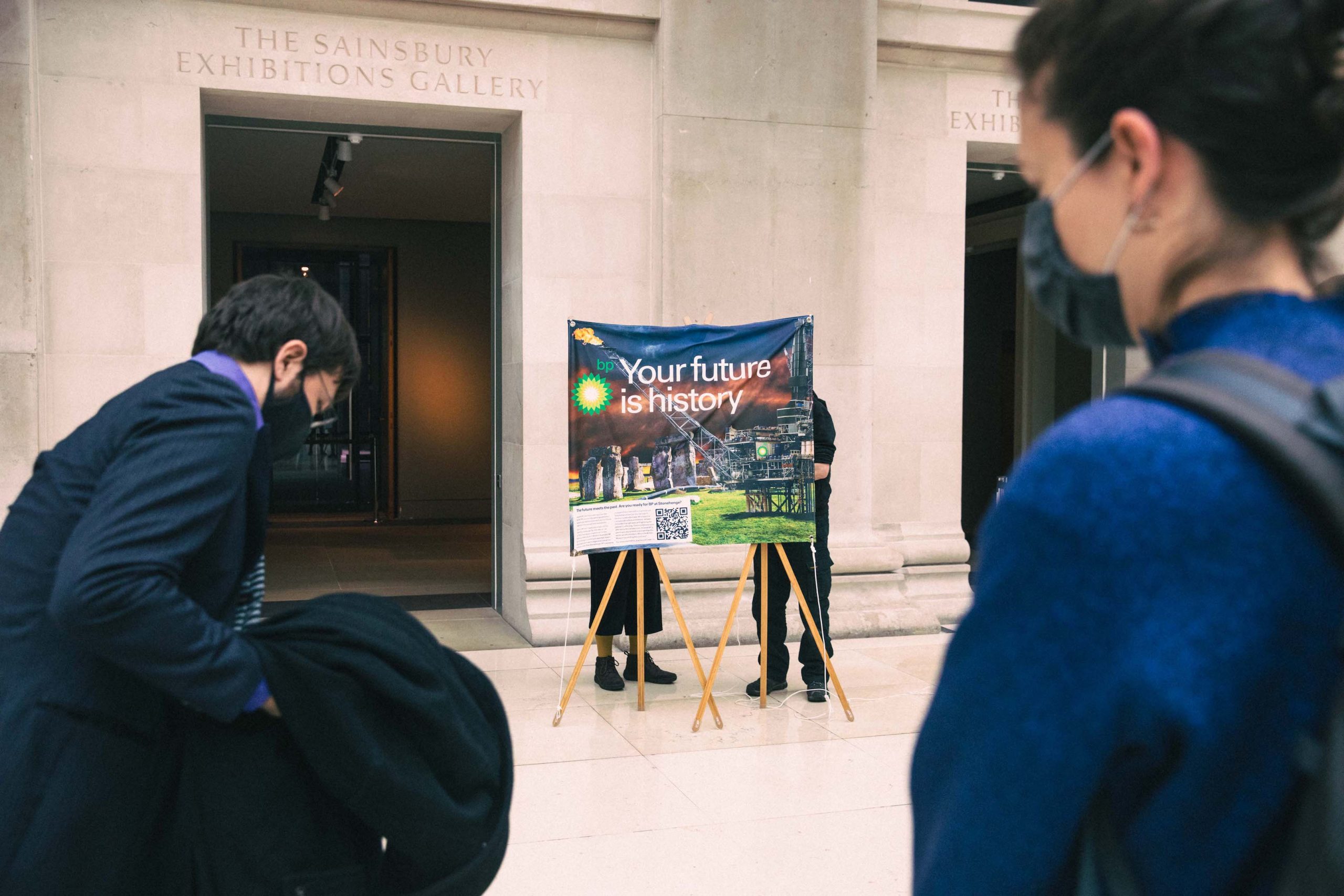 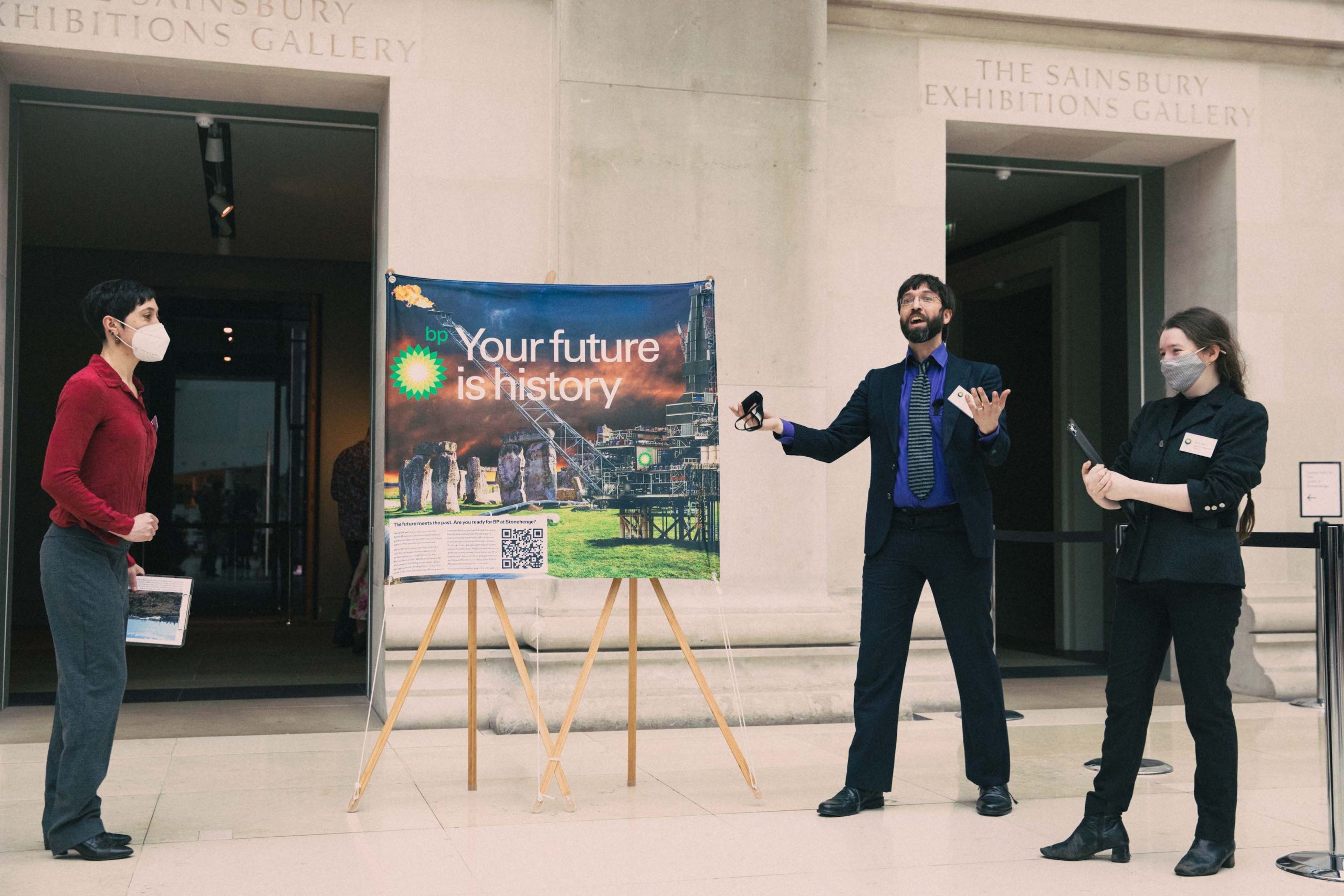 Sign and share BP or not BP’s petition calling on museums to drop BP – and move beyond fossil fuels – once and for all.

Linkedin
RELATED ARTICLES
OTHER ARTICLES
Finland-born photographer Sirkka-Liisa Konttinen looks back on her decades-long documentation of life in Northern England.
Freddie Miller’s new series of photographs investigates who today’s trainspotters are and what drives their unfettered enthusiasm.
Whether it's partygate, the climate crisis or the spiralling cost of living, the fightback begins on the picket lines writes Tommy Vickerstaff
Writers Gracie Mae Bradley and Luke de Noronha take on the callousness of borders, arguing for a world beyond them.
Photographer David Hoffman recalls documenting the extreme wealth inequality around Tower Hamlets and Hackney int the 1980s.
Over a dozen Stop Deportation activists locked themselves to each other outside a detention centre to prevent coaches taking those due to be on the Rwanda deportation flight from leaving.