News & Politics / I worked as a Deliveroo rider and trust me, we all must support their strike 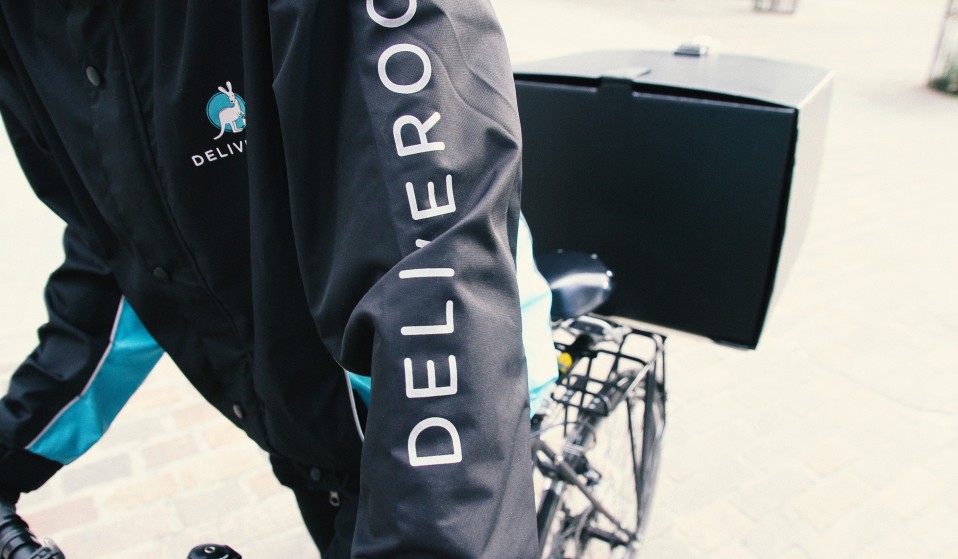 Deliveroo drivers aren’t just fighting for fair pay, they’re on the frontline of the against a complete erosion of wages and job security.

Deliveroo drivers aren’t just fighting for fair pay, they’re on the frontline of the against a complete erosion of wages and job security.

When I came off worst in a scuffle with the tax man earlier this year, Deliveroo was a quick and easy way to earn a bit of extra money. I was on the road and earning just over a week after clicking on an Instagram advert for cycle couriers, and could easily fit the hours around my full-time job. Over the next three months, the fortnightly paycheque from Deliveroo gave me enough cash to survive, while I paid off debts to friends and relatives from my salary.

Flexibility is the big sell to workers from the new players in the growing ‘on-demand’ or ‘gig economy’, like Uber, Taskrabbit and Deliveroo. For me, the work was there when I needed it, and I also really enjoyed being paid to cycle around Hackney – even on bitterly cold February nights, when I started.

I worked weekend evenings under a contract which would usually see me come home with over £10 per hour after a three-hour shift, made up from the £7 hourly fee, £1 per delivery and the (very rare) tips. I wasn’t too fussed about the lack of job security, Deliveroo’s refusal to acknowledge me as a proper employee or knowing that being classified as “self-employed”, they wouldn’t support me in case of sickness or injury. I met interesting people, got fitter and discovered a few nice restaurants.

I eventually quit because as the evenings got longer and warmer, orders came in later and later after our 6pm start. My paycheque began shrinking and the periods of hanging around with other riders got too boring.

I never had to rely on Deliveroo for all of my income, but if had – like Deliveroo’s many full-time workers – I know I would have struggled to make ends meet. Take the Afghan refugee who was working 60+ hours on a scooter to support his family.

I totally understand why Deliveroo riders are still on strike over a new contract that replaces the minimum hourly wage with a £3.75 flat rate per delivery. Even though I wasn’t full-time, if I was still working for the company, I would join them on the picket line to demand fair pay. Mindnumbing though they were, at least during the hours I sat doing nothing, I was still being paid the base rate of £7 per hour – just shy of the national ‘living wage’. 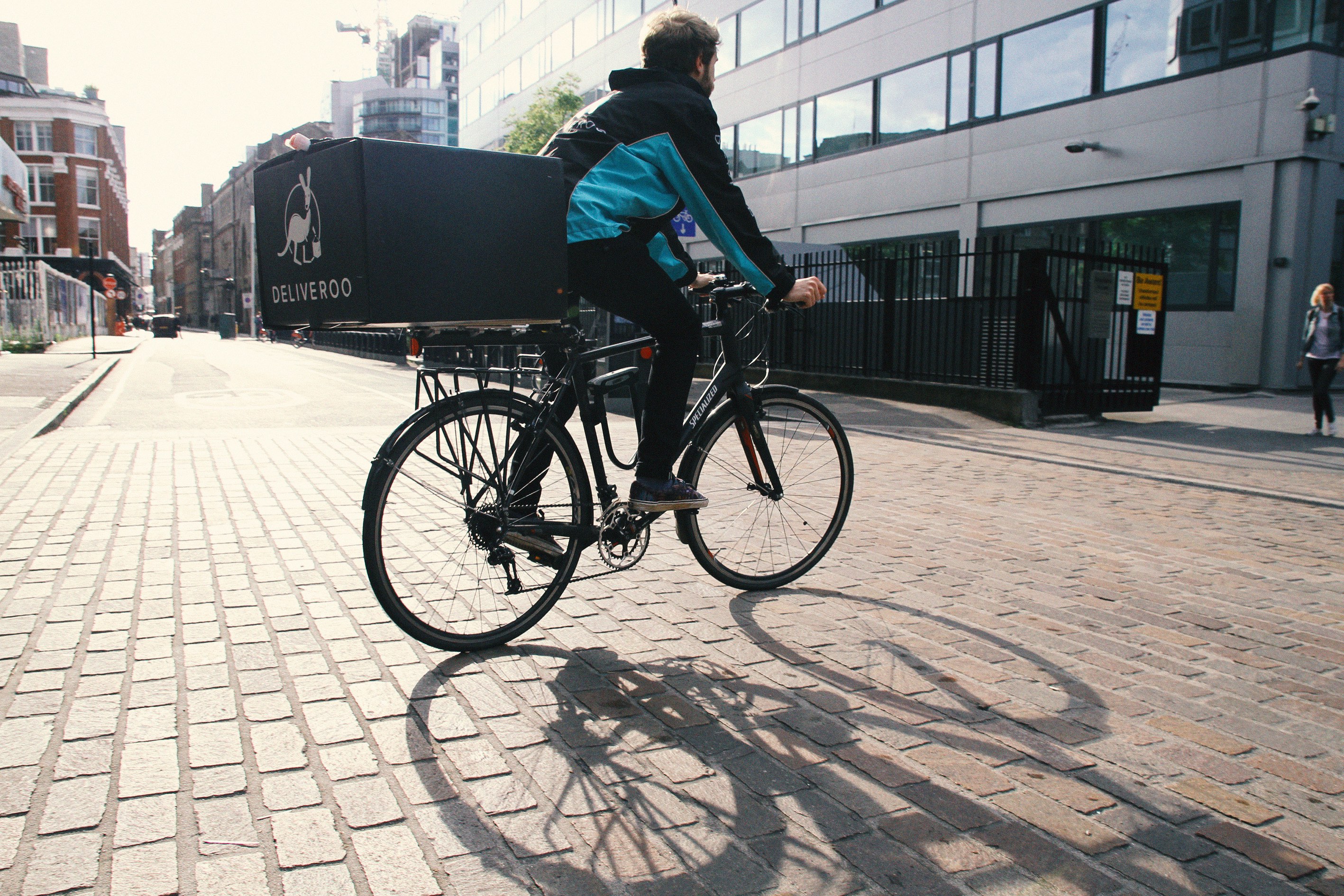 Deliveroo claim that riders will earn more during peak times. But riders are rightly worried that under the new contract, they could earn next to nothing when business is slow. One of the major challenges of running an on-demand service is managing the ups and downs of demand. People generally all want the same thing at once, and when it comes to food, people eat around the same time. But forecasting busy periods is at best an imprecise science. In my experience of Deliveroo, if it was cold or raining people would order more and earlier, but during warm weather they stayed out and didn’t order till much later, if at all.

So, how do you ensure you have workers to meet the rush in busy periods, but aren’t left paying their wages to sit around doing nothing if it’s quiet? The new contract takes the risk off Deliveroo when it comes to anticipating demand and places it firmly on riders. It allows the company to flood the streets with riders, helping them meet demand and keep waiting times low during busy times, but suffer no penalty if riders sit around idle for the rest of the day.

Remember, as supposedly “self-employed” workers, riders already pick up the majority of risk: illness, injury and providing and servicing their own bike and smartphone are all their responsibility.

Uber and Deliveroo are leading the charge of companies that are asking employees to take on more and more risks of business themselves, while offering little in the way of wages and no shred of job security in return.

With high levels of graduate unemployment and well-paying, professional jobs harder and harder to come by, the pool of cheap labour willing to accept worsening terms looks unlikely to dry up any time soon.

It’s the responsibility of entrepreneurs looking to exploit our labour to take on some of the risks inherent in business. By shifting the balance of burden even further on to his employees, Deliveroo founder and CEO William Shu is attempting to remove all risk to the company and place it firmly on the shoulders of low paid workers – and the state who will likely have to step in in the case of sickness or injury.

But again, Deliveroo is just one actor in a much wider trend of companies reneging on their responsibilities to workers, from refusing to cover sick leave to calling to pay less tax, which indirectly supports workers through funding education and health, for example.

Deliveroo riders began their strike against the new contract on 11 August 2016. They forced Shu to promise riders would be given a choice over signing the controversial new contract. But only after losing a considerable amount of trade over the weekend, and having the government step in to remind Deliveroo of its obligation to pay workers the National Living Wage (NLW) of £7.20 an hour, unless a court or HM Revenue and Customs defines them as self-employed.

When it emerged that riders would in fact be forced to move zones to retain the old contract, losing their established patch and likely suffering a reduction in earnings in the process, it galvanised riders to continue their strike. Now in its sixth day, Deliveroo riders have redoubled their condemnation of the new contract and poverty wages, while arguing to be paid the London Living Wage, which is £9.40 per hour, plus £1 per delivery.

The strike isn’t just about Deliveroo riders earning a fair wage for their work. They’re on the the frontline in the battle against the total erosion of job security. Whether it’s Deliveroo today, Uber tomorrow or the next bright new tech startup down the line, the fight being waged by those in the most precarious of positions is taking on an economy that seems hooked on low wage labour.

Ever worked in retail or in a restaurant? How would you feel about not being paid when there are no customers – or even if you work in an office, for the times when there’s nothing to do? It’s a slippery, slippery slope.

An earlier version of this story quoted a figure of £3.45 per delivery under proposed new contracts, the correct figure is £3.75.

You can support the crowdfunding drive for Deliveroo riders’ strike fund, organised by the Independent Workers Union.

Linkedin
RELATED ARTICLES
OTHER ARTICLES
Social prescribing connects people with non-medical support to improve their health and wellbeing – but some experts worry it’s just a stick plaster solution.
At his West Bank restaurant, Fadi Kattan established himself as the voice of modern Palestinian cuisine. Now, he’s bringing his innovative, bold flavours to the UK’s capital.
Photographer Becky Tyrell went down to the fading banger and stock raceway to meet a community desperate to keep it alive.
Since 2007, Gideon Mendel has made 20 trips to document floods in 13 countries. The result is an alarming record of what has already been lost to the climate emergency.
Tristan O’Neill’s shots of dancers caught in moments of reverie at the height of rave’s golden age are a testament to the UK’s legendary club culture.
A new law change is enabling Britain’s donor-conceived children to know the truth about their origins – but campaigners say the fertility industry must do more to protect people.