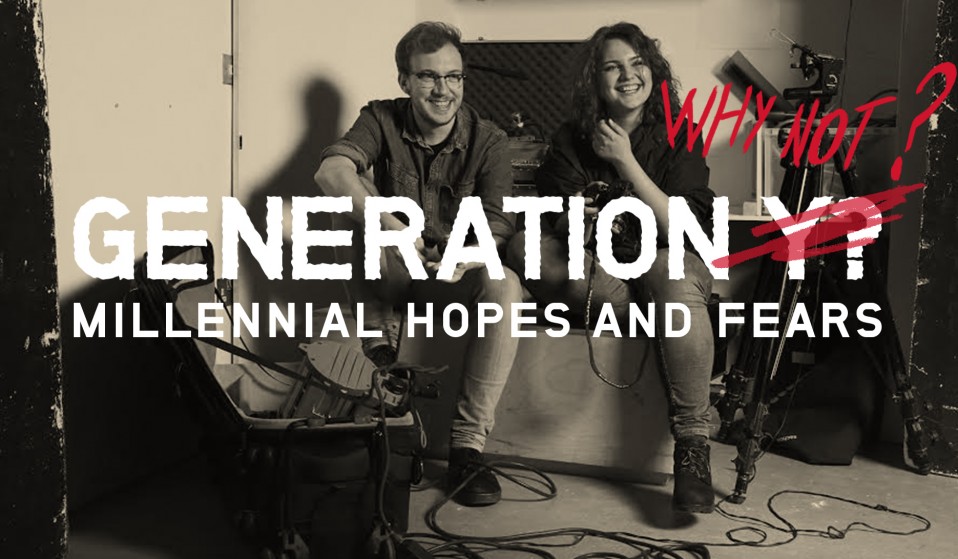 AltGen are a pioneering social enterprise - inviting freelancers and millennials to imagine a world with security, cooperation, and jobs without bosses.

AltGen are a pioneering social enterprise - inviting freelancers and millennials to imagine a world with security, cooperation,and jobs without bosses.

“The way young people see work is changing, but the job market and traditional businesses are not changing with it,” says Constance Laisné, co-founder of AltGen, a London based organisation that sets out to transform the way we work and co-operate.

“We want to provide a space for solidarity among the young self-employed, where they can afford to take time a break from work and can afford to be sick, instead of living precariously from contract to contract.”

The number of young freelancers in the UK has doubled since the start of the financial crisis, and in a decade 400,000 millennials have fallen into poverty. Most of us are underpaid, overworked and unbelievably insecure. 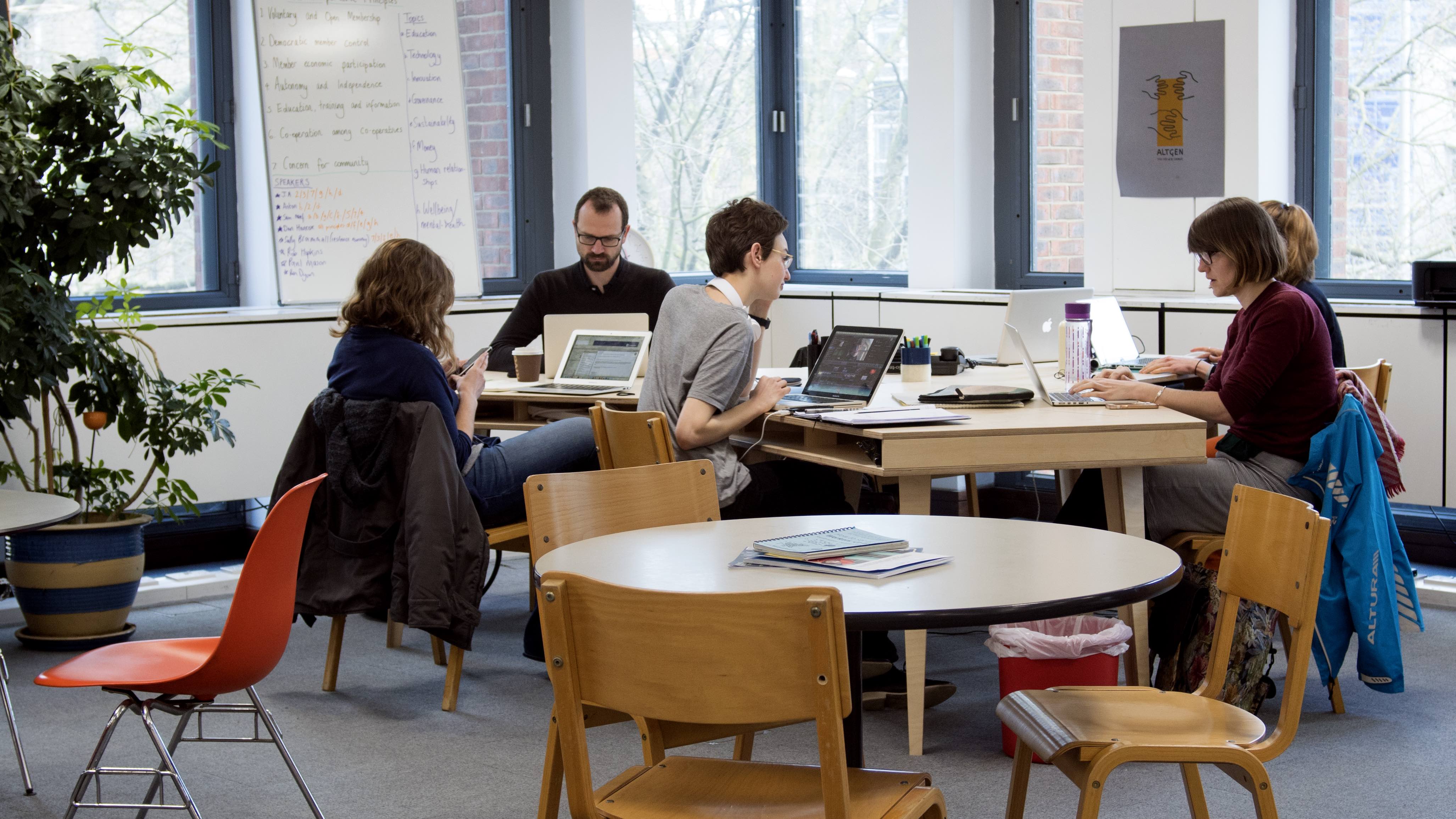 For two years AltGen have been fighting to change this. They campaign for young people to start their own worker co-ops: businesses owned and run democratically by members, rather than directors or shareholders. Now they want to make a co-op of freelancers, providing things like sick leave, paid holiday, maternity leave, and security to those of us who could otherwise only dream of it.

I’m sat in their unorthodox office in Borough, South London. At the end of bustling rows of traditional housing co-op office desks, a vivid arrangement of Scandinavian furniture comfortably fits 16 creatives. Opposite me in a modish green shirt and oversized headphones is Henry Naylor-Stead, AltGen’s newest member and a former student at University College London. 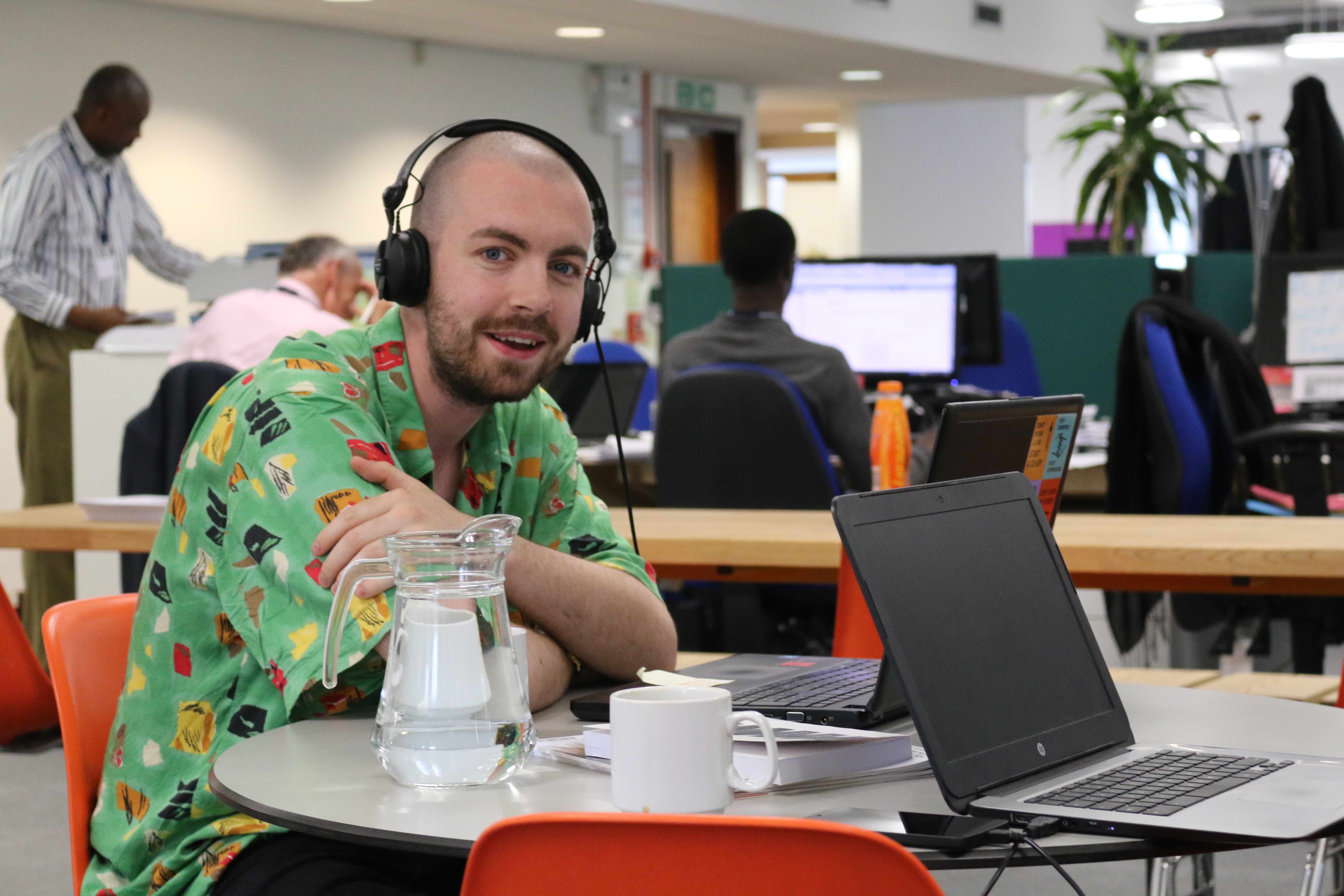 “I’m often getting boorish and repetitive when I’m drunk with my friends about how fucking great co-ops are and how much I believe in them”, he tells me fervidly. “But this is exactly how it’s done.”

For £100 a month part-time or £200 full-time, co-ops will be able to get access to this shared space – which for London is a bargain, as well as being able to benefit from financial, political and emotional advice and support. 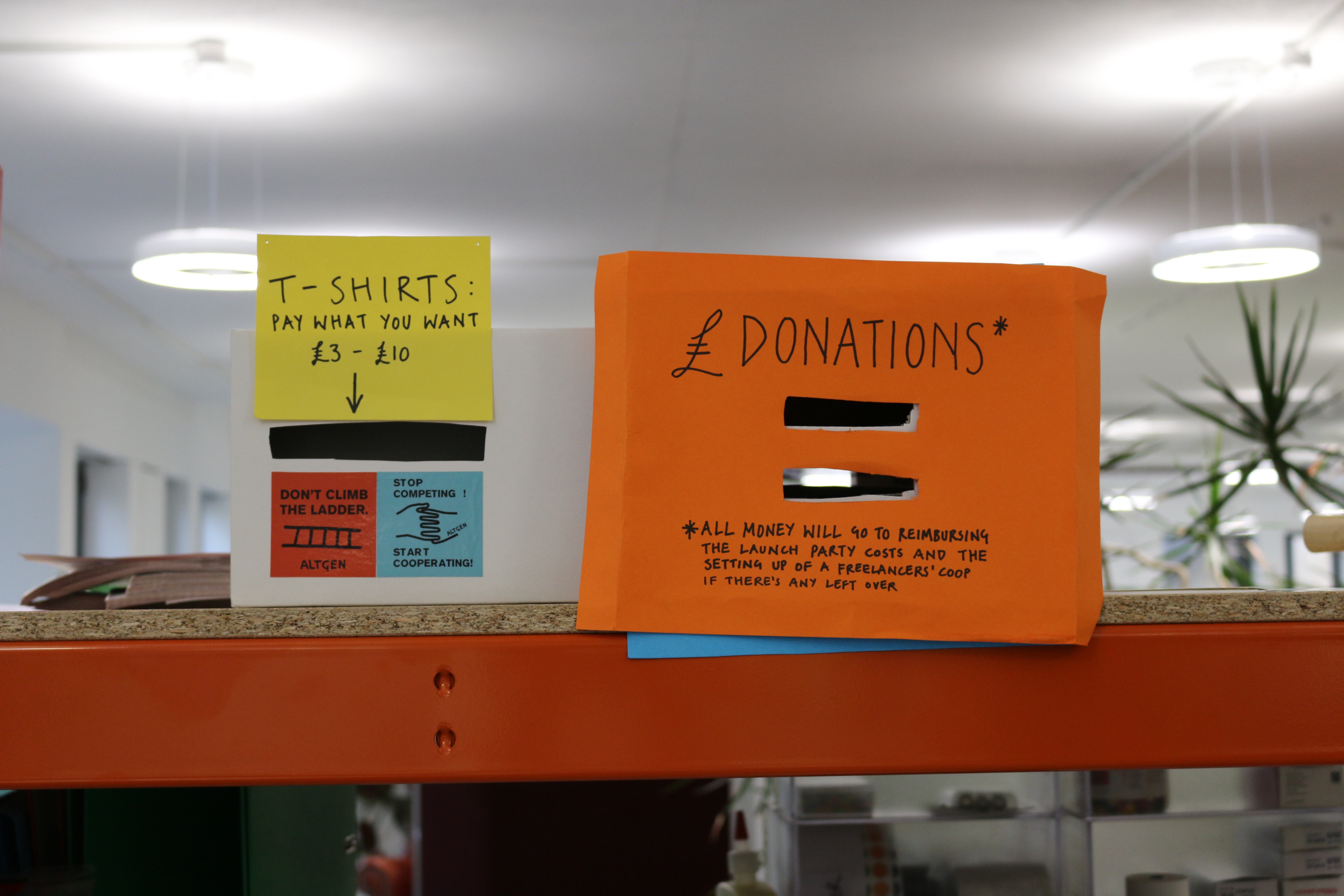 Reassuringly co-operative messages are plastered on boards around the office, reminding residents they’re there as part of a community of mutual support – it may well push them to drop a few quid in a box to contribute to the cost of the launch party too.

Graduates, especially artistic ones, find they are going to have to work freelance for at least some portion of their career, with 29% seeing this as part of their ‘career strategy.’ AltGen see it as an opportunity: a chance to politicise a generation who’ve turned away from a society doing little to help them. 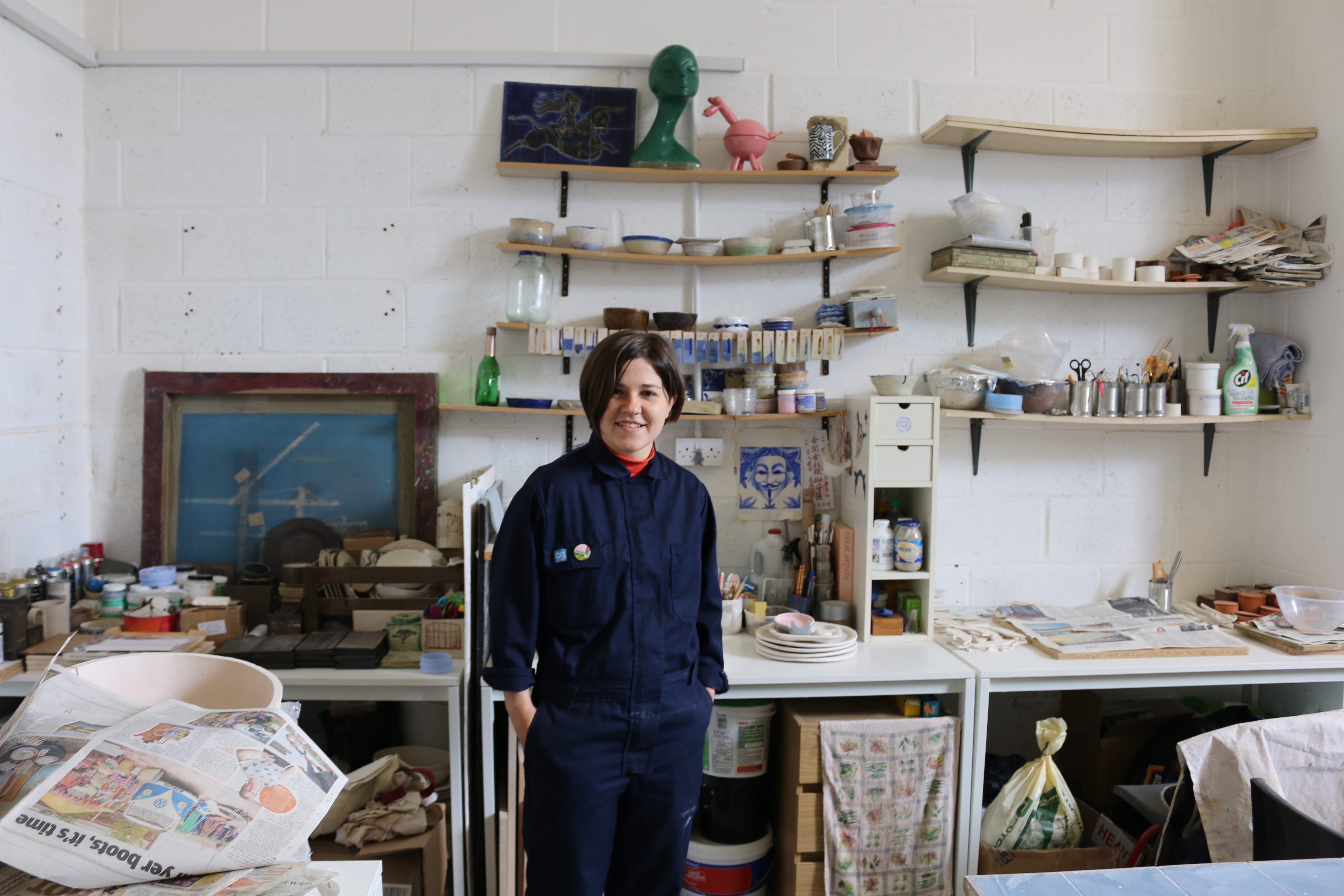 One of those graduates is Russian artist and activist Tatiana Baskakova, who set up a co-operative ceramics studio alongside her sister Anna with AltGen’s help. The pair won a £2,000 grant as part of an AltGen competition, as well as training and other support.

We drink tea together in their studio, from mugs made in their own kiln.

“When the whole thing started there wasn’t much access to ceramics,” she says. “The workshop where Anna was was closed down, and colleges were shutting down their degrees in ceramics and their facilities.”

We’re surrounded by ceramic arts and pottery created by resident artists. In the room next door, Anna is running a workshop for young professionals taking a Saturday out to learn a new skill.

Tatiana brought her politics to the business where Anna brought ceramics, and neither of the sisters are allowed to tell the other what to do. In the course of our interview Anna messages that one of the pottery wheels is broken, and they agree to spend on a new one there and then.

For a couple of months Tatiana wants to join the Altgen space herself to explore what an artist can add to a freelancers’ co-op, and in her words, be a “troublemaker in the corner”. Behind the smirk is sincerity – labour organising often means breaking rules, and Ceramics Co-op have broken a lot. 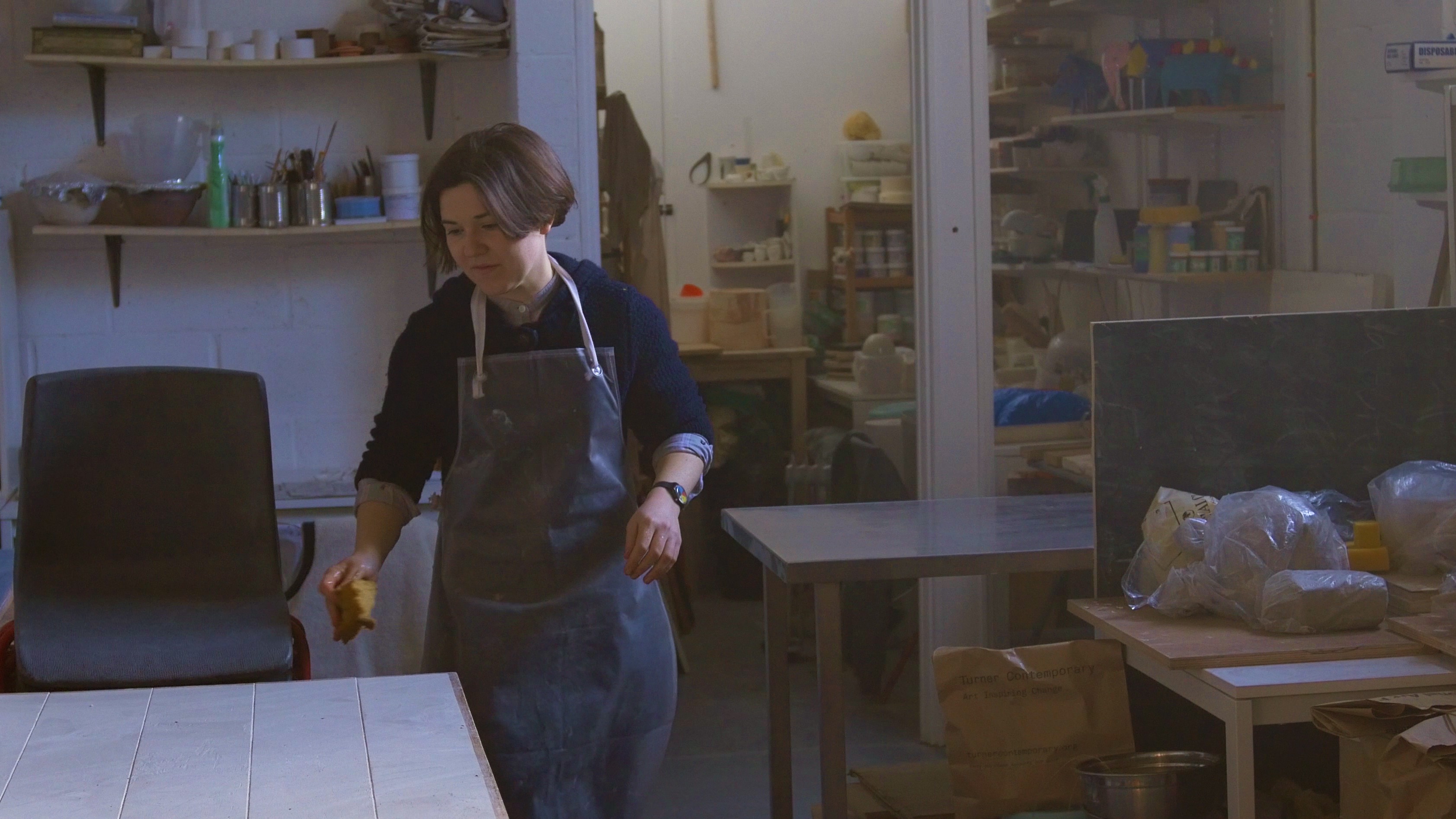 “Politically I get to practice something that I’m told is not possible”, she explains. “We are employees but we don’t serve the studio, we run it, own it and act as guardians.”

Another of AltGen’s success stories is Blake House, a pair of filmmakers who joined this young co-op network last year. Partners Simon Ball and Ieva Padagaitė want to challenge the hierarchical environments they’ve encountered on film and TV sets with collective decision making; they won’t work for big companies and hold clients to their own ethical standards.

“It’s not like a traditional co-working space where you’re there for your project and you’re working just on your desk and keeping to yourself or something like that.” Simon articulates over Skype. “It’s more communal and it’s warm. It’s directly benefitted me from the AltGen workshops and stuff like that.” 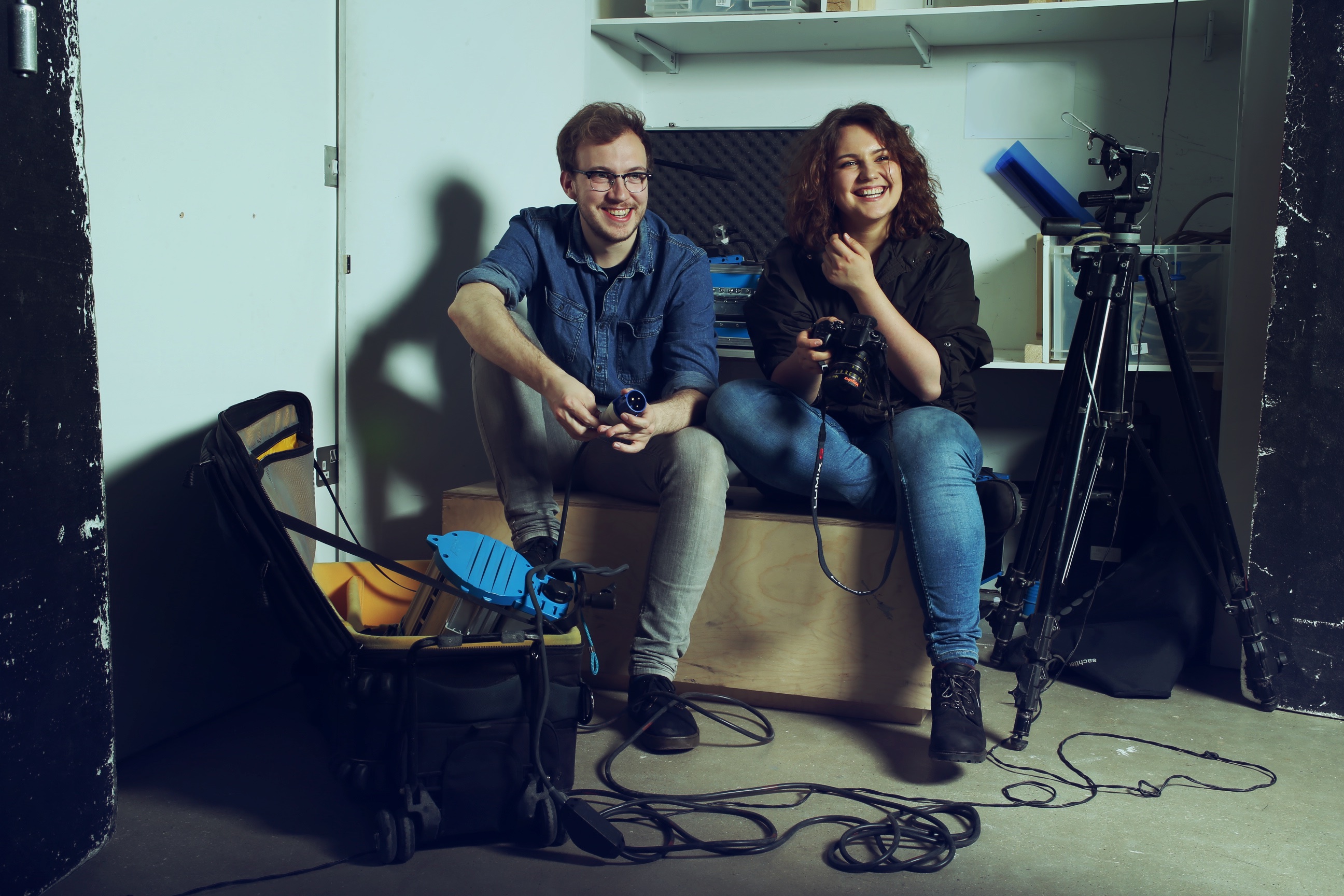 Joining Altgen doesn’t just mean working in an office – freelancers will find themselves part of a community and a social group, with responsibilities to each other and the space.

That means sharing skills and re-thinking impulses learned in an educational system that is inherently competitive. For AltGen, it means everything they have to do is done in pairs – apparently, things get done twice as fast.

For Henry, there’s nothing he’d rather do: “When you start (as a co-op) it really does feel so much more empowering.”

“Feeling like even when you’re just doing your own personal projects there are people around you who have no vested interest in what you’re doing, but are genuinely concerned about it, and believe in it as much as you do is very affirming.”

Linkedin
RELATED ARTICLES
OTHER ARTICLES
At his West Bank restaurant, Fadi Kattan established himself as the voice of modern Palestinian cuisine. Now, he’s bringing his innovative, bold flavours to the UK’s capital.
As she gears up for the release of her first book, the 24-year-old climate activist talks standing up to authority and building a more inclusive movement.
Author Edward Banches dicusses his new book, which examines the hard rock and metal scenes in five African countries: Botswana, Togo, South Africa, Kenya and Ghana.
AI companies that develop image-generators using copyrighted artwork from the internet are coming under fire from artists who say that it amounts to theft.
The action took place in response to the 200 asylum-seeking children who were placed in hotels run by the Home Office who have gone missing.
A new film from Berghaus traces the story of Adam Raja, who left behind a turbulent upbringing to discover the healing power of climbing.