News & Politics / Zimbabwe’s diaspora is continuing to fight for freedom 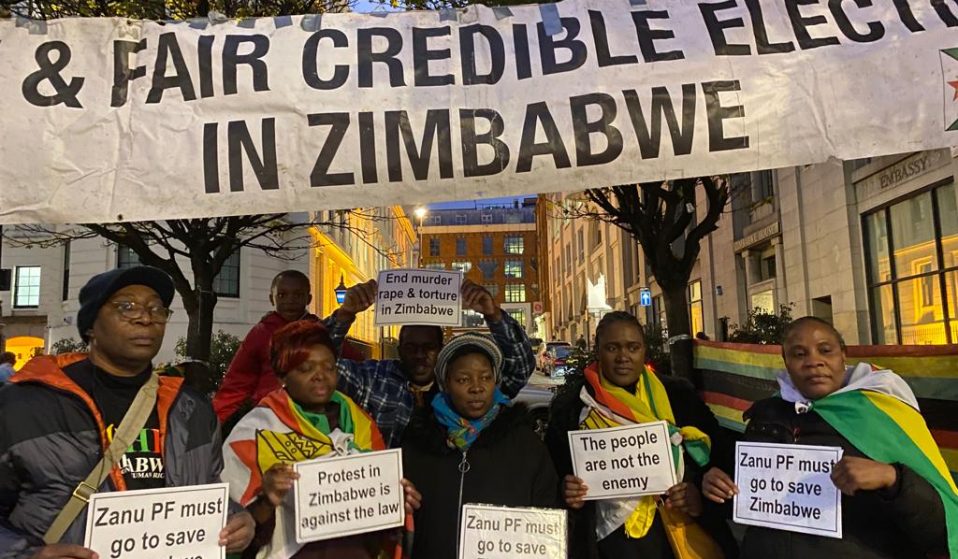 Zimbabwean activists around the world are leading the fight for change ahead of the 2023 election.

In the face of government suppression and violence, Zimbabwean activists around the world are leading the fight for change ahead of the 2023 election.

Every Saturday, a group of Zimbabweans gather outside London’s Zimbabwe embassy, whatever the weather – from the capital’s muggy summer sun to torrential winter rain. Many wearing the nation’s flag and carrying banners, the group, known as the Zimbabwe Vigil, typically sing and dance to uplifting political Shona and Ndebele songs calling for change in their country. They hand out leaflets and petitions to passers by, with statements such as “end murder, rape and torture in Zimbabwe” and “no to the military dictatorship”.

This October will mark the 20th year since the group started meeting every Saturday for entire afternoons to stand in solidarity with those at home.

Around 128,000 Zimbabweans were estimated to be living in the UK as of 2019 according to Office of National Statistics data, most having left their country in the past two decades due to political and economic turmoil. Groups such as the Zimbabwe Vigil have sprung up around the world as activists in and outside of Zimbabwe relentlessly push for change – those in the country doing so in the face of tenacious state violence and persecution. 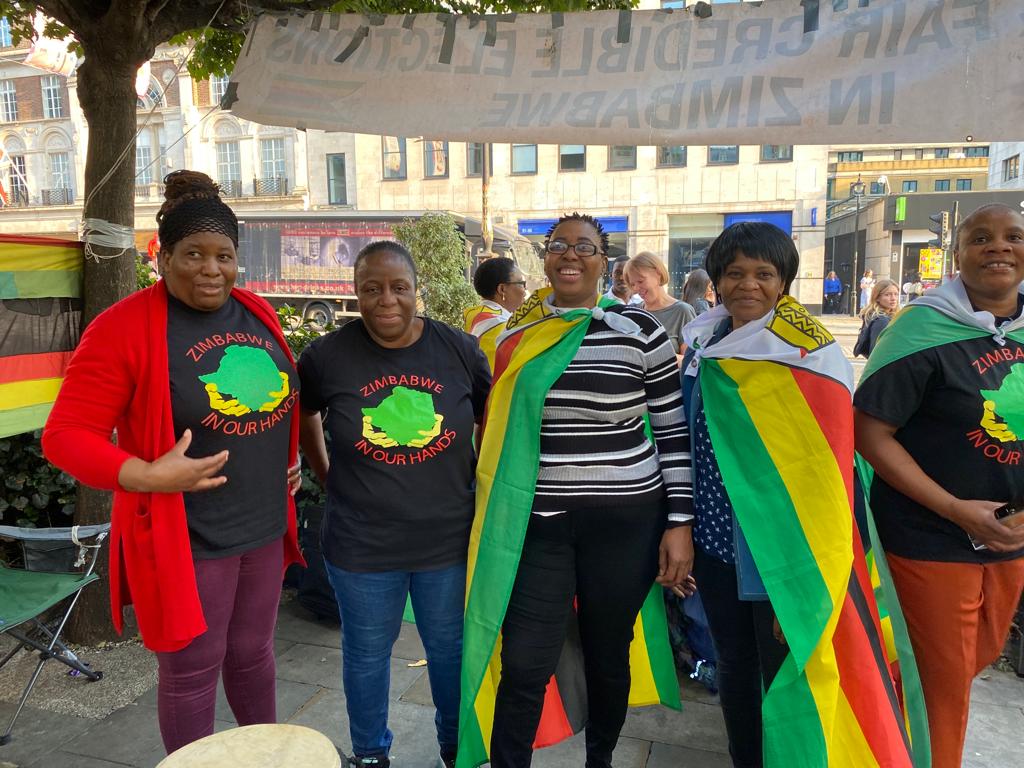 The Zimbabwe Vigil in the UK was founded in October 2002 as farm invasions, violence and injustice swept the country. They have met every week since, although recently participating online due to Covid-19. Having left Zimbabwe in 1969, Rose Benton, 76, one of the group’s founders, felt she needed to do something to help after visiting in 2001. “Things had changed a lot. Mugabe was a corrupt, dictatorial ruler and things were not right. There was a lot of violence going on,” she says.

In the early 2000s, Zimbabwe entered an ongoing socio-economic crisis under the Zanu-PF government, formerly led by the late dictatorial ruler Robert Mugabe. Still under Zanu-PF leadership, and now led by former Vice-President Emmerson Mnangagwa; democratic failures, human rights abuses and economic uncertainty continue. Corruption is rampant, with the country ranking 157th in 2021’s Corruption Perceptions Index, which many see as the root cause of diminishing healthcare, education and freedom.

“Currently in Zimbabwe we have a serious, legitimate leadership crisis,” says Netsai Marova, a political opposition activist from Zimbabwe. “We’re dealing with a ruthless dictator.” 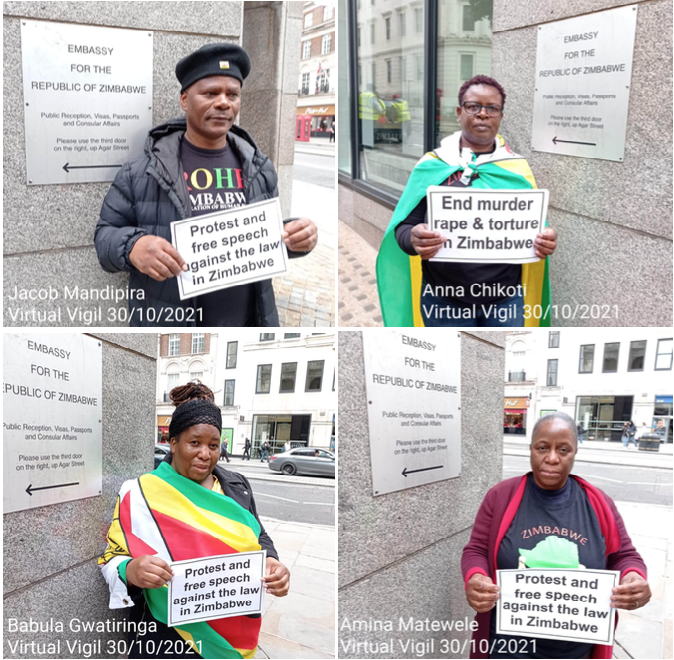 Elections in March 2002 saw hope for opposition parties, with the Movement for Democratic Change (MDC) gaining popularity among those keen for revolution. But faith was soon quashed as Zanu-PF did everything they could to maintain power, from fraudulent electoral processes to violence against opposition figures. Subsequent elections have been increasingly difficult and, 42 years since Zimbabwe’s independence, the party remains in power.

But political activists in the country continue in their pursuit for change, desperately fighting what many feel is a lost cause in preparation for 2023’s upcoming elections.

Netsai Marova was 25-years-old when she was abducted, beaten and assaulted by Zimbabwean police in May 2020. She and two others – Joana Mamombe and Cecilia Chimbiri – were dumped in a rural area and hospitalised for their involvement in a peaceful demonstration against the government’s failure to support the poor through the Covid-19 pandemic. “Now, I have to live with that because of the brutal acts of the state,” says Marova, who is now 27.

Marova joined politics as a student in 2013 and, in 2018, was elected as a National Youth Deputy Organising Secretary for MDC, now rebranded the Citizens Coalition for Change (CCC); leading campaigns for academic freedom among other causes. But this hasn’t come without a cost, with the abductions causing her and her family considerable trauma. “It really affected me,” she says. “The state was trying to dehumanise us.”

Marova was made to attend court sessions from the hospital then detained for 16 days at Chikurubi Maximum Security Prison. She was imprisoned again twice – once in March 2021 for seven days and again on the day of her father’s funeral. She left the country soon after and has been subject to five arrest warrants since; charged by the state for allegedly lying about the torture, questioning the government and various other claims.

Now living alone and passportless in a country she has not disclosed to anyone – including her mother – Marova is completing her postgraduate studies on a scholarship before returning to Zimbabwe, where she knew she would be unable to further her education.

Despite the threats against her, she says nothing will stop her from speaking out. “It really made me [stronger]. Each time I reflect about the pain of it, because I still live today, it kind of gives me hope,” she says.

Marova’s story is not unique, with disappearances, arrests and brutalisations of opposition figures a common occurrence in the country. In 2019 alone, the UN reported around 49 cases of abductions and torture in Zimbabwe, with no investigations or accountability for perpetrators.

“The life of a political activist in Zimbabwe is not easy,” says Ropafadzo Makumire, 28, Deputy Mayor and councillor for Chiredzi, Zimbabwe. “You can be beaten, you can be arrested, you can be detained for no charge, you can be imprisoned, you can face any painful consequence from the government. There is no freedom to express what we feel.” 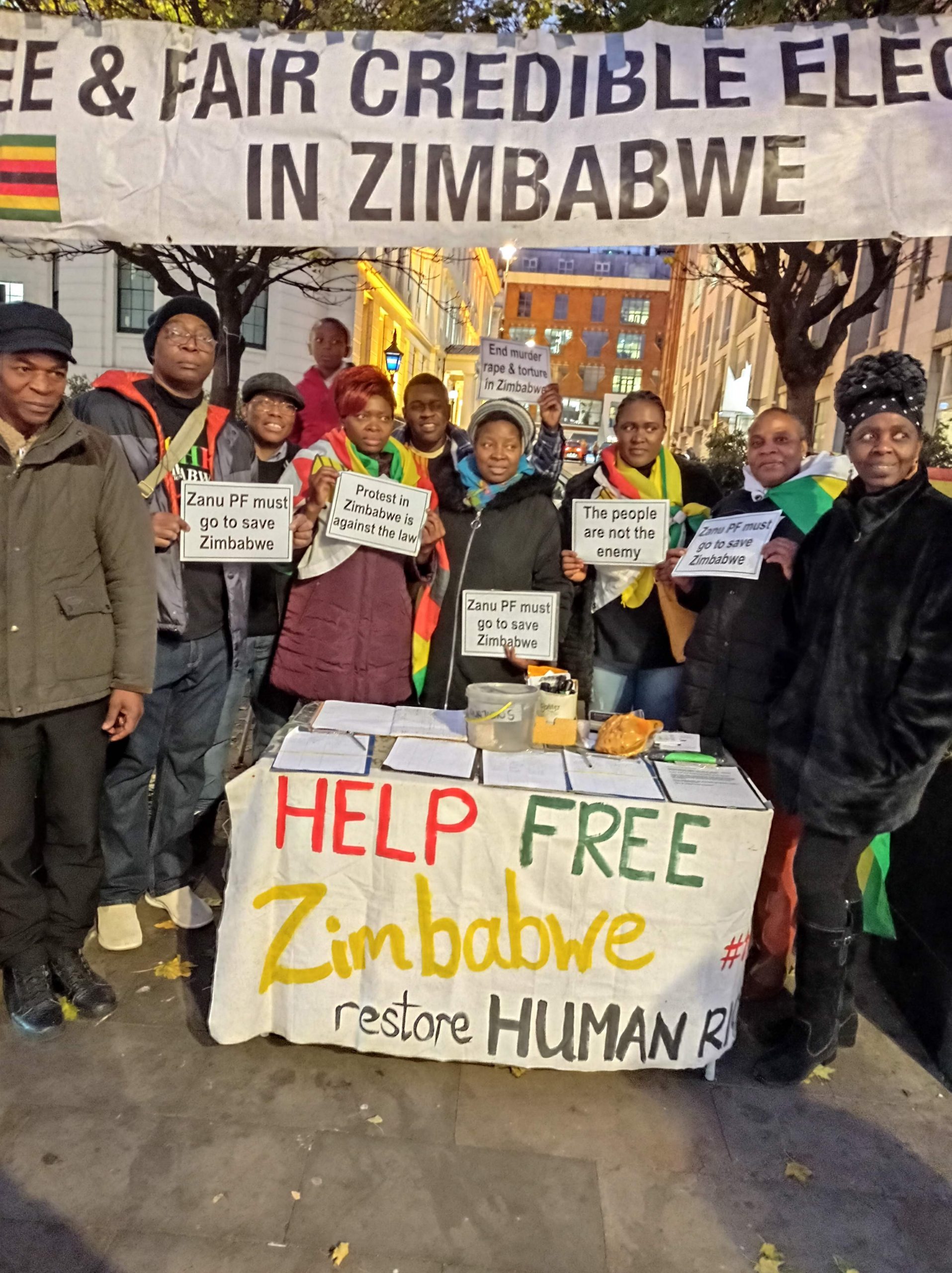 Makumire was arrested in 2020 for demonstrating against the government’s economic failures. He was detained in a cell for a night and imprisoned for three days, where he was exposed to Covid-19 and not given drinking water.

But, like others, he says there is nothing the government can do to deter him. “If you don’t participate in politics you’ll be allowing the inferior to govern you,” he says. “Our fathers and forefathers participated in the war of liberation to bring freedom to the people of Zimbabwe.”

Cases such as Makumire and Marova’s are closely followed by the global Zimbabwean diaspora, encouraging groups like the Zimbabwe Vigil to push on against all odds. But Benton says optimism for change can be difficult, having protested for over a quarter of her life. She isn’t alone, with many sceptical that next year’s elections will be any different. But this hasn’t deterred Benton and activists like her, who says the Vigil will keep going to inspire action in the younger generation.

Activists in Zimbabwe welcome support from the global diaspora and Marova says international attention is crucial in increasing pressure on the current administration.

Looking to next year, Marova remains confident in Zimbabwe’s youth and is campaigning for widespread voter registration, optimistic that Nelson Chamisa, leader of the CCC, will pave the way for change. “Young people are fed up,” she says. “If [we] remain silent, the situation remains the same.”

But amid recent memories of a violent and fraudulent 2018 election, fear is still prevalent. Opposition members are concerned about the leading parties’ likelihood to suppress opposition votes; whether through intimidation, preventing voter registration or contesting election results. Marova says young people have reported being turned away from registration centres due to ‘broken machines’ and told to travel, often long distances, to district offices to register.

For young voters, this can be off-putting. “[It means] the person has to incur the cost to participate in national development issues,” Marova says. Despite this, activism campaigns have been widespread, with supporters dubbing the movement the ‘yellow revolution’ – the colour of the CCC.

Makumire is confident in “fresh voters” and hopes that, in numbers, the opposition can triumph next year. “This is the battle that we have started and it will only stop once the change that we want has come,” he says. “We will not stop at anything; we will not be intimidated, we will not be frightened, we will not be scared. There is nothing the government could do to stop us.”

The Zimbabwe Vigil shares this sentiment, pledging to keep protesting every Saturday until there are free and fair elections in Zimbabwe. While the group has been operating online and IRL since the start of the pandemic – uploading images of members holding protest slogans to their website and weekly newsletter – Benton hopes they will be back to making their usual noise outside the embassy in time for their 20th year anniversary this October.

Marova plans to return once she has finished her studies, preparing to be imprisoned upon arrival but planning to contest her innocence. “I’m not running away,” she says. “My heart is in Zimbabwe.

“We have so much potential to usher in change in our country,” Marova adds. “Lots of young people are really yearning to see a better Zimbabwe and I believe if all those young people registered to vote now and participated in voting, that’s the only weapon that we can use against the state.”

Linkedin
RELATED ARTICLES
OTHER ARTICLES
Over a dozen Stop Deportation activists locked themselves to each other outside a detention centre to prevent coaches taking those due to be on the Rwanda deportation flight from leaving.
With inflation now at a 40-year-high of 9 per cent, demonstrations organised by TUC took place to demand action from the government.
A new report has found that the majority of Britains approach trans issues with compassion. It’s about time this was reflected by our media landscape.
The singer-songwriter discusses her intimate new project – and the advice she’s picked up across a career as one of rock’s leading voices.
The curators of a new exhibition are hoping to shed light on Plymouth’s vibrant but often overlooked nightlife.
In the latest instalment of Photographers in Conversation, the chronicler of raves, protests and beyond explains why he’s drawn to such specifically visceral environments.