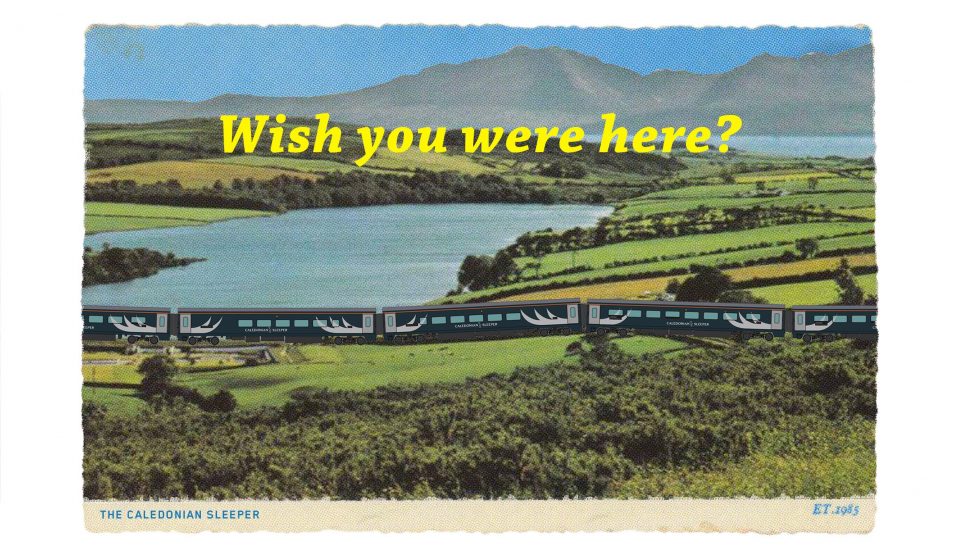 Dubious new ownership and a disastrous opening have raised doubts over the long-awaited service’s reputation. But is it really all that bad? Writer Francisco Garcia investigates.

Dubious new ownership and a disastrous opening have raised doubts over the long-awaited service’s reputation. But is it really all that bad? Writer Francisco Garcia investigates.

I’ve long felt a bit sorry for Euston Station. Unlike Kings Cross – its first cousin just down the road – there have been no multi-million-pound redevelopments or regeneration programmes attached to its fertile post-industrial hinterlands. Though ringed by a Pret and a deceptively labyrinthine M&S, the interior doubles up as a heritage site for late-90s institutions which have long since fallen on hard times. Delice de France, Upper Crust and WH Smith – a faintly sorry triptych – sit sadly in the concourse, each slightly more punchdrunk-looking than the last.

But it’s not nostalgia that’s brought me here on a violently damp Tuesday night in June. Instead, I’m here for an overnight journey to Glasgow, on the newly refurbished Caledonian Sleeper service. On the morning of April 29 this year, the first of the new £150m fleet travelling from Scotland to London arrived at the station. Alright, it might have been three hours late due to signalling issues, but who couldn’t forgive a few teething problems on such an ambitious project? This was a two-and-a-half years in the making, enforced modernisation of the venerable old service with its roots in the late 19th century. The Caledonian Sleeper still endures as one of only two remaining overnight rail services in the UK, along with the deceptively glamorous-sounding Night Riviera between London and Penzance.

The ambitions of the new service are a matter of public record. Serco, the company that bought the franchise from Scotrail in 2015, declared it a “hotel on wheels”; a luxury experience that doubles up as an environmentally friendly alternative to inter-UK plane travel. With double cabins, en-suite bathrooms, attentive room service and high-end catering, it’s astutely tethered to the mid-tier tourism market and commuters fed up with the hassle of airports or packed out, often delayed Virgin services. It runs seven nights a week, from Aberdeen, Inverness and Fort William, through Glasgow and Edinburgh, all the way down to London. It is a grand old British institution, given a lick of paint and an ineffably glamorous finish.

That’s the idea – though the reality has so far proved rather less romantic. Serco are best known for their history of “problems, failures, fatal errors and overcharging”, as a leak from the 2017 Paradise Papers puts it. From immigration detention centres, to private healthcare and the involvement in prisons across the globe, it’s tough to conceive of a more cartoonishly villainous entity.

The Caledonian Sleeper is also not cheap. Tickets run from £45 (for a reclining seat in the seating carriage) to £335 (for the generously sized double room), which is a significant increase from the old service. A quick glance at Skyscanner reveals that flights to New York would be less costly. To add insult to financial injury, over a third of services to date have suffered delays, while the Highlands section of the service has yet to even launch. It’s fair enough to question who is it for, as it seems inaccessible to the majority of people who would benefit most by its use.

It wasn’t tourism or environmental concerns that drove the history of overnight rail travel in the UK. Until the latter half of the 20th century, services ran to carry workers across the country, in what was then the cheapest and easiest means of travel. Manchester-Liverpool, Bristol-Edinburgh, Nottingham-Kilmarnock, none of these survived the privatisation of British Rail in 1997. In truth, the golden age had ended before that, as daytime travel times started to shorten in the 1970s and ’80s making night trains financially unattractive.

The Caledonian Sleeper wasn’t always immune from these pressures, according to Bob Gwynne from the National Railway Museum in York. “The sleeper remained, but privatisation could have killed it at several points,” he tells me over the phone. “Luckily there was a huge uproar, particularly loud among politicians who served constituencies on the West Coast of Scotland. They thought, with good reason, that it was another attempt to cut them out of the London-centric decision-making process. It would have just been so isolating for these communities, who rely on it to connect them with the south”.

All the pomp and heraldry attached to the new service taps into a wider point about the state of train travel in the UK. Serco’s explicitly stated vision is for “quality over quantity” as the recent words from Ryan Flaherty, the Caledonian Sleeper’s managing director. It’s a way of attempting to wrap up its sheer expensive as a virtue. After all, we’re all used to constantly inflating prices that have made the UK one of the costliest countries in Europe for rail travel. And while the Caledonian Sleeper makes no bones about its cost, it at least offers the promise of an experience, as well as the brute necessity of getting from A to B. For young people, it offers both a chance to experience a sepia-tinged vision of a fading past and – as Bob has made clear on the phone – a greener, more ethically sound alternative to cheap domestic flights.

As we set off from Euston at a few minutes to midnight, it’s difficult not to suspend scepticism – especially when I’m confronted with my single berth cabin. It’s a world away from the last experience on the service, which was my first ever trip to Scotland as a small child with my aunt. The old toothpaste tube beds have been replaced with an equally small, though significantly plusher, interior. After a few pages of my book, I feel my eyes getting heavy and fling it aside to lie back and let my thoughts drift to the old university friends I’m soon to see, and the pubs we’re due to meet in. It’s a pleasant feeling, drifting off at Watford Junction, knowing that you’re to wake 400 miles to the north.

At about 5am, the idyll is shattered by a fist thumping at the door. It’s an appropriately solemn member of crew with bad news: something to do with a flat tire, followed by some hasty words of apology. We’re all to change at Stafford, where a replacement coach will take us the rest of the way.

There have been better early morning revelations, but I figure it can’t be too bad. It’s been five hours after all, and Stafford sounds reliably northern enough – surely it’ll be nothing more than a quick, painless cross border bus jaunt. It could even be something approaching fun; an opportunity for shared hangdog glances and muted camaraderie with my fellow evacuees. Still, best to check. After scrambling about for bags and belongings, I pull up Google Maps with two still largely unresponsive thumbs.

Stafford is 261 miles south of Glasgow. That means around six hours of coach travel, crawling across the clogged arteries of the UK’s busiest motorways.

As we disembark into the icy early morning rain, I get chatting to the middle-aged man in the next door cabin, whose business card gives the name Frank Fletcher. He’s the Chief Executive of a major charity, due in Glasgow to conduct a job interview he’ll now be several hours late for. This isn’t the first time disruption has happened to Frank already on the new service. “If it happens again, it’ll just get to the point where it’s better to get a cheap flight and a hotel, particularly if the prices rise again,” he tells me, wearily.

It feels like entire civilisations have risen and fallen by the time that the coaches arrive. But it’s a good chance to observe the demographic of my 141 fellow travellers, who appear to be a decently diverse mix of young and elderly, intrepid looking tourists and bemused Americans, school parties and flustered business types. Surprisingly, the mood isn’t as mutinous as it could be. It might be something to do with that old cliche about British society and its ingrained love of queuing, or perhaps just the everyday love of a petty martyrdom. Any aggression in the air is strictly passive, confined to eye rolls and a few puffed out cheeks. Soon enough, we’re off and the disquiet drops as people start jerking into restless looking sleep.

Before departure, I’d been reading about how the refurbishment brings us closer to the European model of rail travel, where overnight journeys are a common fact of life. That, and the unique place that they hold in the popular imagination, from the stories of Agatha Christie and John Buchan to the Hitchcock of North by Northwest. But as we whizz past service stations and faceless countryside my thoughts take a different direction. It’s true, the new Caledonian Sleeper seems to be a very British institution, though not quite in the way that its advertising copy puts across. It is expensive, privatised, inefficient, with its eyes trained firmly to an idealised vision of the past.

Surely, things will only get better. Arriving on Sunday night, it’s a thought steeped in hope rather than expectation. Still, it turns out to be an improvement: departure is only a sprightly two hours delayed.

How do holidays look in the age of climate crisis? The Future Of Travel is a new series exploring new, more environmentally conscious methods of seeing the world.

Linkedin
RELATED ARTICLES
OTHER ARTICLES
Proposals to introduce a minimum GCSE threshold for student loans will disproportionately affect those from marginalised backgrounds.
Finland-born photographer Sirkka-Liisa Konttinen looks back on her decades-long documentation of life in Northern England.
Whether it's partygate, the climate crisis or the spiralling cost of living, the fightback begins on the picket lines writes Tommy Vickerstaff
Writers Gracie Mae Bradley and Luke de Noronha take on the callousness of borders, arguing for a world beyond them.
Photographer Arthur Grace recalls travelling through the Soviet Bloc and finding ways to evade the surveillance of his work.
The singer-songwriter discusses her intimate new project – and the advice she’s picked up across a career as one of rock’s leading voices.