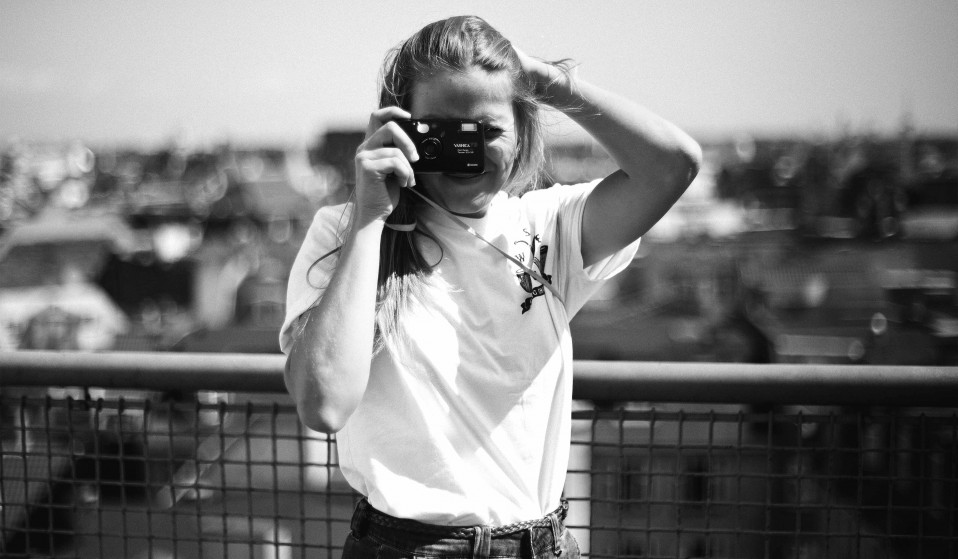 In 2013, we headed out to Copenhagen's CPH Pro to put together this alternative city guide on the city's thriving creative community.

In the second instalment, we cruise with globe-wandering skateboarder and photographer Sarah Meurle as she explores Copenhagen's lesser-known spots.

Occasionally you meet a person and know straight up that they’ve got things ‘all figured out’. That’s Sarah Meurle. Originally from Malmo, in neighbouring Sweden, she moved to Copenhagen in 2012 to teach skateboarding at Fælledparken. In December, she was offered a job in local skate store Street Machine and decided to anchor down a little longer. As Sarah explains, Malmo natives are constantly moving back and forth between Copenhagen, and after visiting the city regularly she decided to take the plunge and relocate. Being both a skateboarder and a photographer, the nomad spirit runs deep.

“I wanted to get to know Copenhagen better,” she says. “That’s kind of what I’ve been doing for the past few years, living in different cities for half a year or a year. I move around a lot, I have a hard time settling. It’s just fun to travel and you really get to know the place if you live there for a while.” 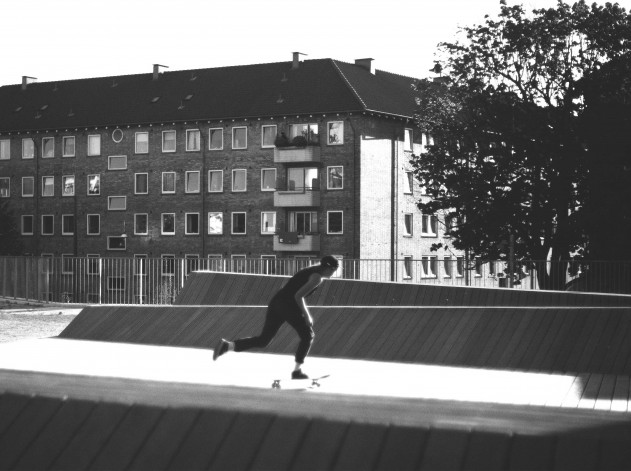 In her short time here, Sarah has become entrenched in the Copenhagen skate scene, even though it’s spread out. There’s the Christiania scene, with all the kids that grew up there and rip through the bowl at Wonderland; the Street Machine guys, who hang out at a rugged plaza near Copenhagen Central Station after work; and the burgeoning female skate scene, which Sarah says is constantly growing. But to her, the idea of ‘scenes’ is pretty irrelevant; she just likes to skate. “It’s rad to have a girls crew, but you shouldn’t skate with a person just because it’s a guy or a girl – you should skate because you want to skate with a friend and it’s fun,” she adds.

When we catch up with Sarah on a balmy Sunday evening, she takes us on a frantic tour of some of the best spots around Osterbro with her friends from Malmo. Every spot is insane. There’s the Red Spot featuring weird Russian fast food signs and a mammoth wall ride up the side of a red house (subsequently locked down by the council who clearly didn’t know what they’d built), a basketball court cocooned in bowl-esque banks and a school with hidden mini-ramp-like wooden banks on the roof. Sarah dives straight in alongside the guys, casually popping ollies with envy-inducing air. She’s got it down.

Sarah’s made a name for herself as a photographer from a certain zeitgeist, with work regularly featured in galleries across Europe, including 2012’s Anywhere Road girls skate exhibition with HUCK and Copson Street. On Friday evening, following the CPH Pro qualifiers, Sarah is at sponsor WeSC’s store for the launch of her Make It, Don’t Fake It photography exhibition alongside Mike O’Shea. Outside, on the packed-out Nørrebro street, WeSC are also throwing a perfectly synced ‘Sausage Party’ with wieners flipped on a huge grill and street beers flowing. Revellers, skaters and party people pass through to check the exhibition which includes photos of Sarah’s visit to New York, both before and after Hurricane Sandy. It’s the calm before the storm, with chilled city scenes juxtaposed against fallen trees. 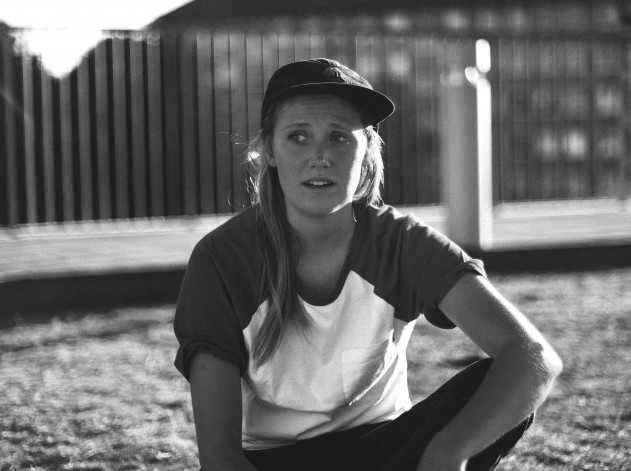 Make It, Don’t Fake It inadvertently speaks of Sarah’s character, too, as she remains cool and level-headed despite the amount of attention flung her way. Carrying a camera everywhere she goes, her photography is defined by spontaneity. Shoots aren’t really planned; they creep up on her – during a chance encounter on a secret rooftop or while she’s hanging at her favourite swimming spot.

“It’s kind of just about capturing what I like to do and adventures in life,” she smiles. “It’s my favourite thing to do – to go explore and find things. The same goes with nature. I’d rather photograph the nature around Copenhagen than the city. It kind of comes hand-in-hand with skateboarding, because you go around to find spots and places to shoot.” 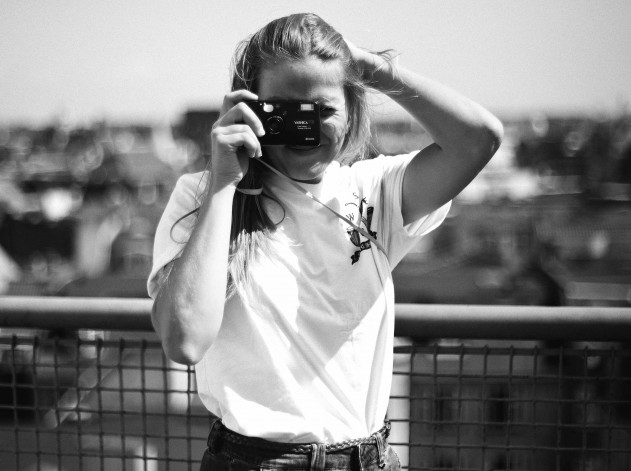 Local Lowdown:  grab a bike, grab a board and get rollin’ through Copenhagen with Sarah as your guide.

Nørrebro Skatepark/ The Red Spot/ The Big Striped Hill/ The Velodrome. Four skate spots located in the area of Nørrebro along a bike path. They are all in a row, one after another. It’s just amazing.

Carlsberg, Enghave. This is the old Carlsberg beer factory. It’s no longer producing beverages, nowadays it’s an art area with lots of exhibitions going on there.

Assistens Kirkegård. This is a graveyard but it’s also a place where people go to hang out, have a picnic, drink beer, next to the graves of old dead Danish people. I sometimes go there after buying a falafel at Five Star across the street.

Kate’s Joint, Blågårdsgade. For a good meal out, that’s one of the places I’d go to. The food is really good. And that street in general is quite nice.

Nordhavn, Swimming Spot. One of the coolest places I’ve ever been in Copenhagen, and I just recently heard about it. Go on a sunny day and jump from one of the old cranes out there… If you dare.

Linkedin
RELATED ARTICLES
OTHER ARTICLES
As the Scottish government announces a rent freeze, an activist with Living Rent who fought and won shares how they did it, and what must come next.
Rhiannon Adam spent three months capturing an ageing society wracked by division, isolation, and the aftermath of scandal.
Photographer David Corio’s archive offers a glimpse inside a revolutionary era of music and nightlife.
The workforce is now gearing up for industrial action after receiving a measly pay rise, reports Ella Glover.
A group of young Palestinians have found temporary freedom in the act of parkour, reimagining wreckage and ruins as a series of high-octane playgrounds.
In his 2008 series, the photographer pictured himself as Angela Davis, Martin Luther King Jr., Malcolm X, and other prominent figures.