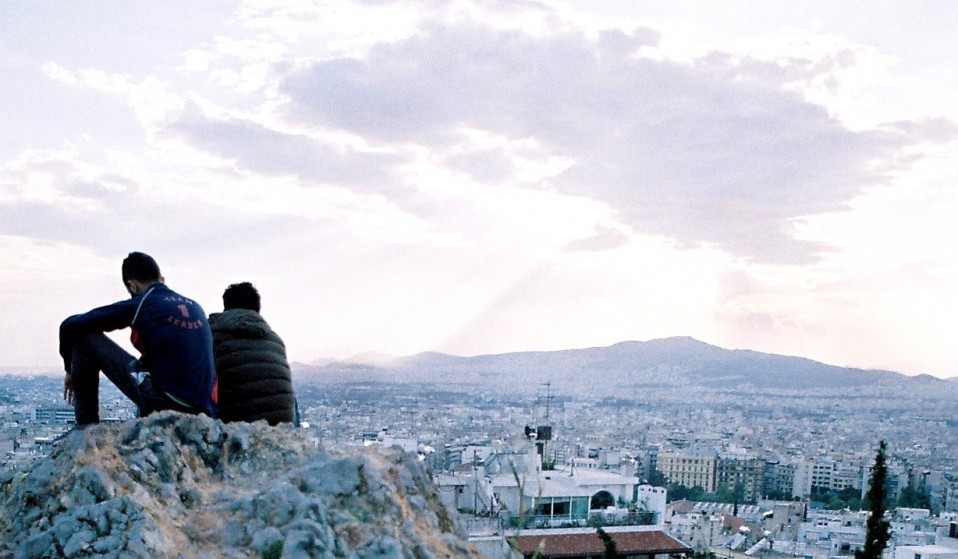 In the midst of Greece’s economic struggles, a relentless passion for underground music is propelling forward the sounds of the country’s capital.

In the midst of Greece’s economic struggles, a relentless passion for underground music is propelling forward the sounds of the country’s capital.

In the online world of underground techno, attentive ears will have noticed a development in solid releases coming out of Athens over the past few years, exploring darker, more experimental sounds like EBM, acid house and industrial.

While Greece is no newbie in the international techno and house communities, the 2010’s marked the beginning of a new era in the industrial scene, largely heralded by the LP Flaws by producer Sawf. Released in 2011, it turned heads with its use of broken beat and house influences mixed with cut up vocals – at the time, a rebellious take on techno that was not expected from this corner of the world.

Since then, a string of talents has followed, each with their takes on new experimental streams in techno and house, witnessing of a busy local scene somewhere inside this sea of sun-bleached buildings.

On the invitation of producer duo In Atlas and Venus Volcanism, I came to Athens to follow in their footsteps and get a peek into the electronic music scene that defines the sound of their city today. The women are both based in Athens, from where they compose their grainy lo-fi productions dressed in dark wavy synth and distorted vocals. 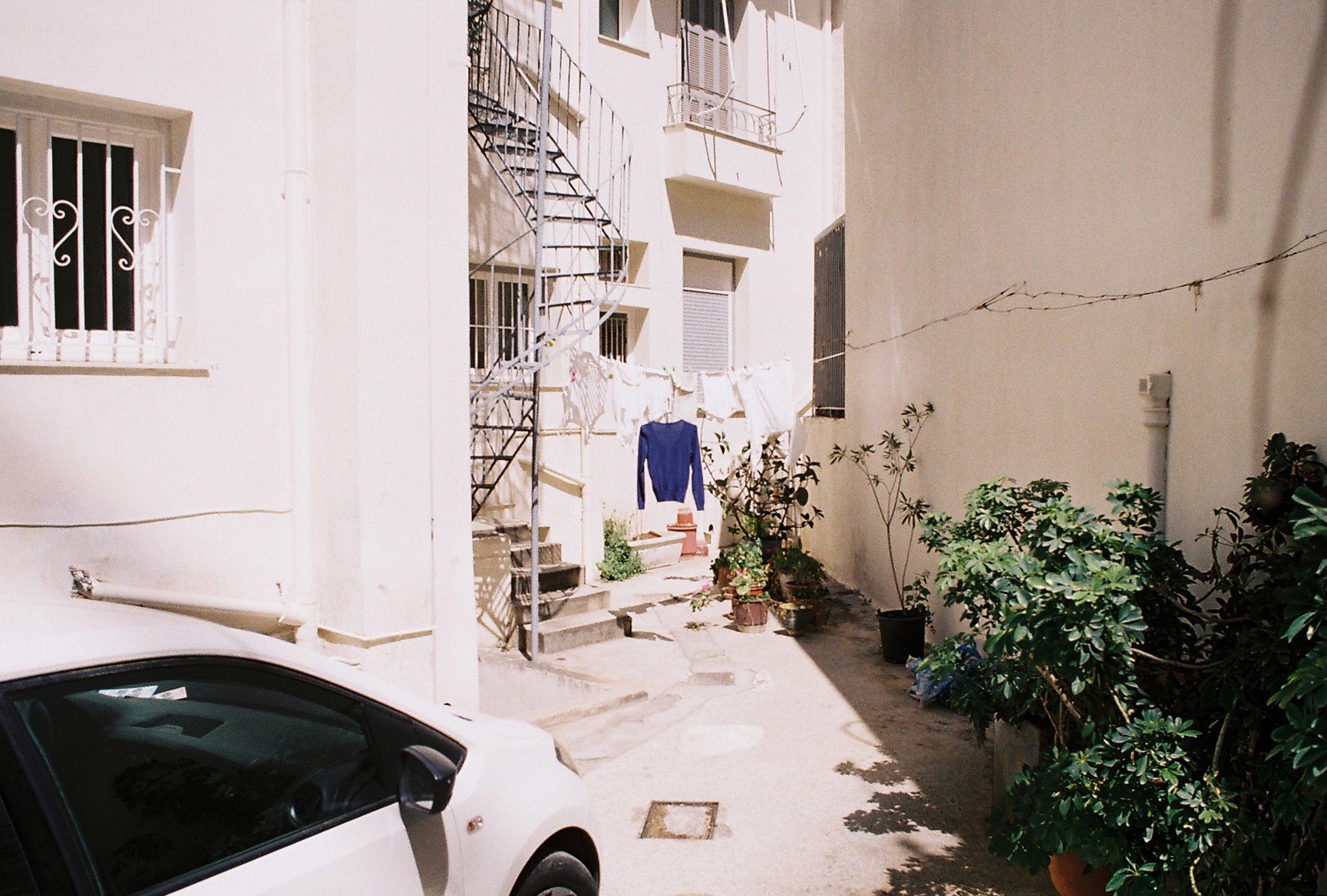 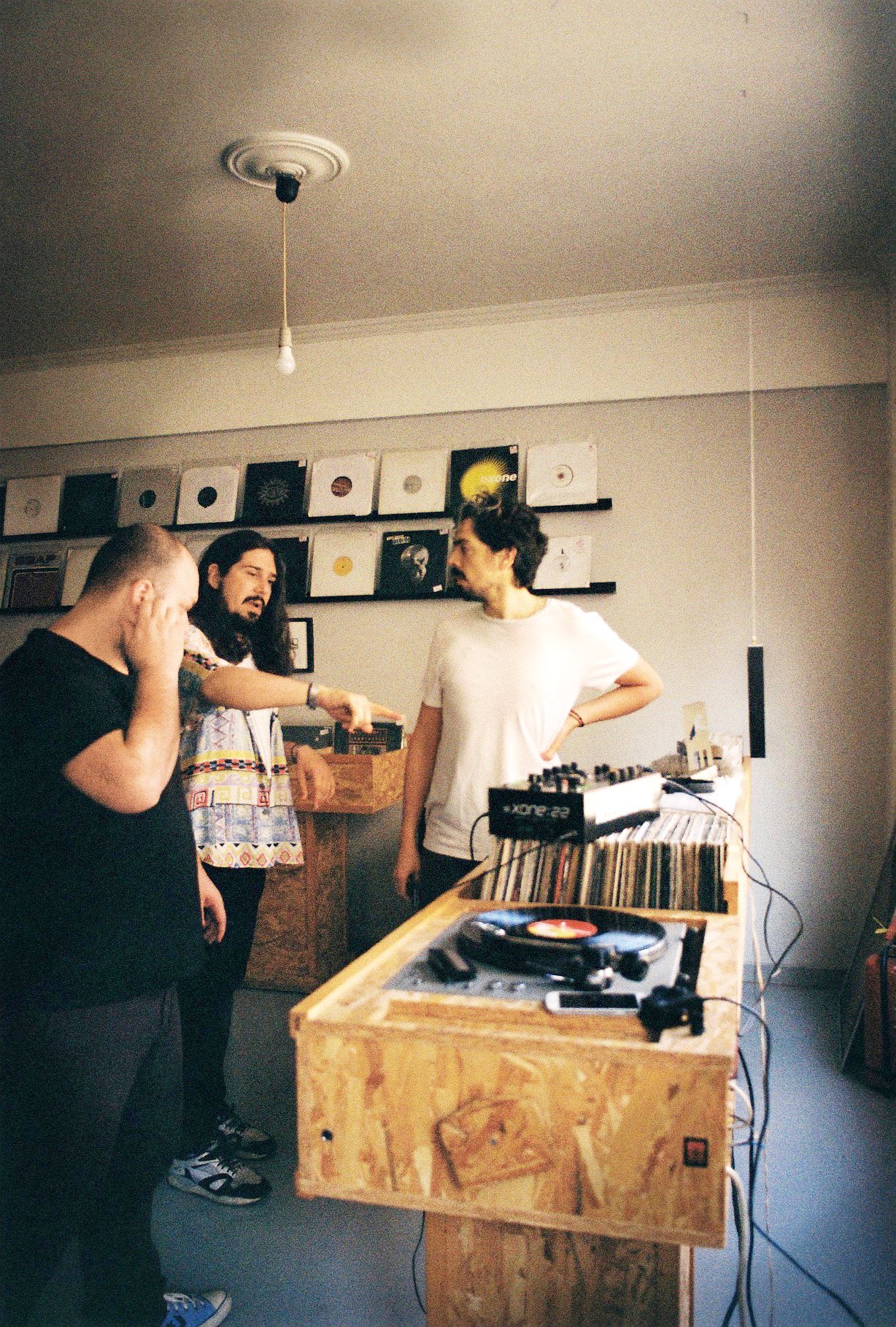 In the one week that I was in the city, there were more electronic music events on than I had the stamina to attend. But at the ones my two hosts manage to bring me to, the atmosphere was friendly and the crowd familiar; the same faces appear across different days and different venues, and it doesn’t take long to catch up with many of the producers, DJ’s and entrepreneurs, who have been central in forming the scene with their incessant work on countless events and releases over the years.

During a Saturday afternoon, on Record Store Day, I ran into Kondaktor, who was part of starting the influential label Modal Analysis in 2012. We sat on the staircase outside a busy open-house-open-decks event at the record label Lower Parts. Half-shouting over the loud bass, he explained to me that the scene is experiencing a steadily growing interest, and that he thinks the work of Modal Analysis, and the team of fiery souls around it, has had some stake in making it happen.

Their numerous initiatives and events have continuously sought to accommodate more experimental expressions crossing into other fields of art, and over time, it has seen local culture opening up to it. “When we started it, the scene hadn’t exploded yet,” he explained. “I think Modal was part of making that happen. Seeing us playing, seeing us doing parties and festivals and other stuff, brought out new kids that wanted to make music.” 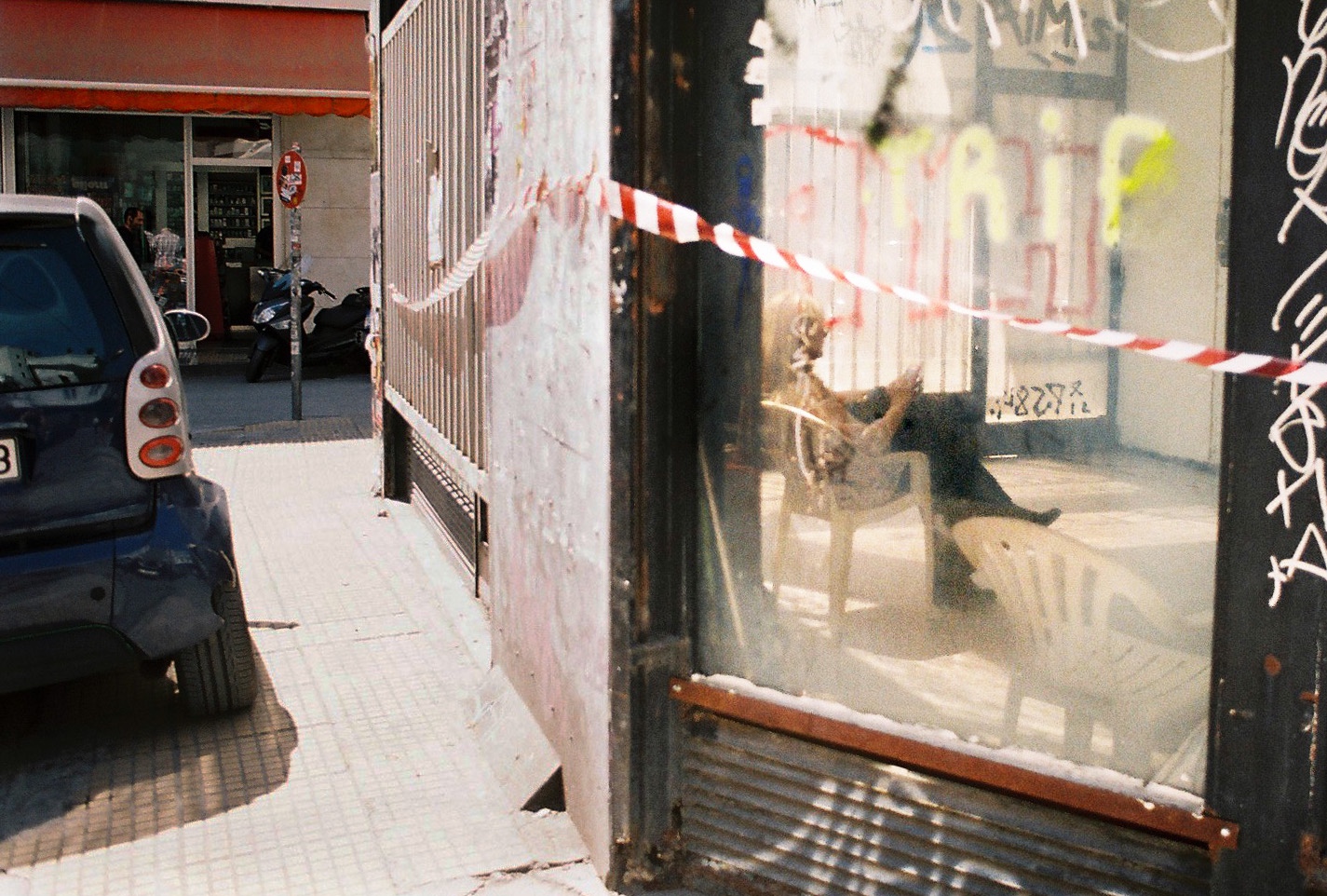 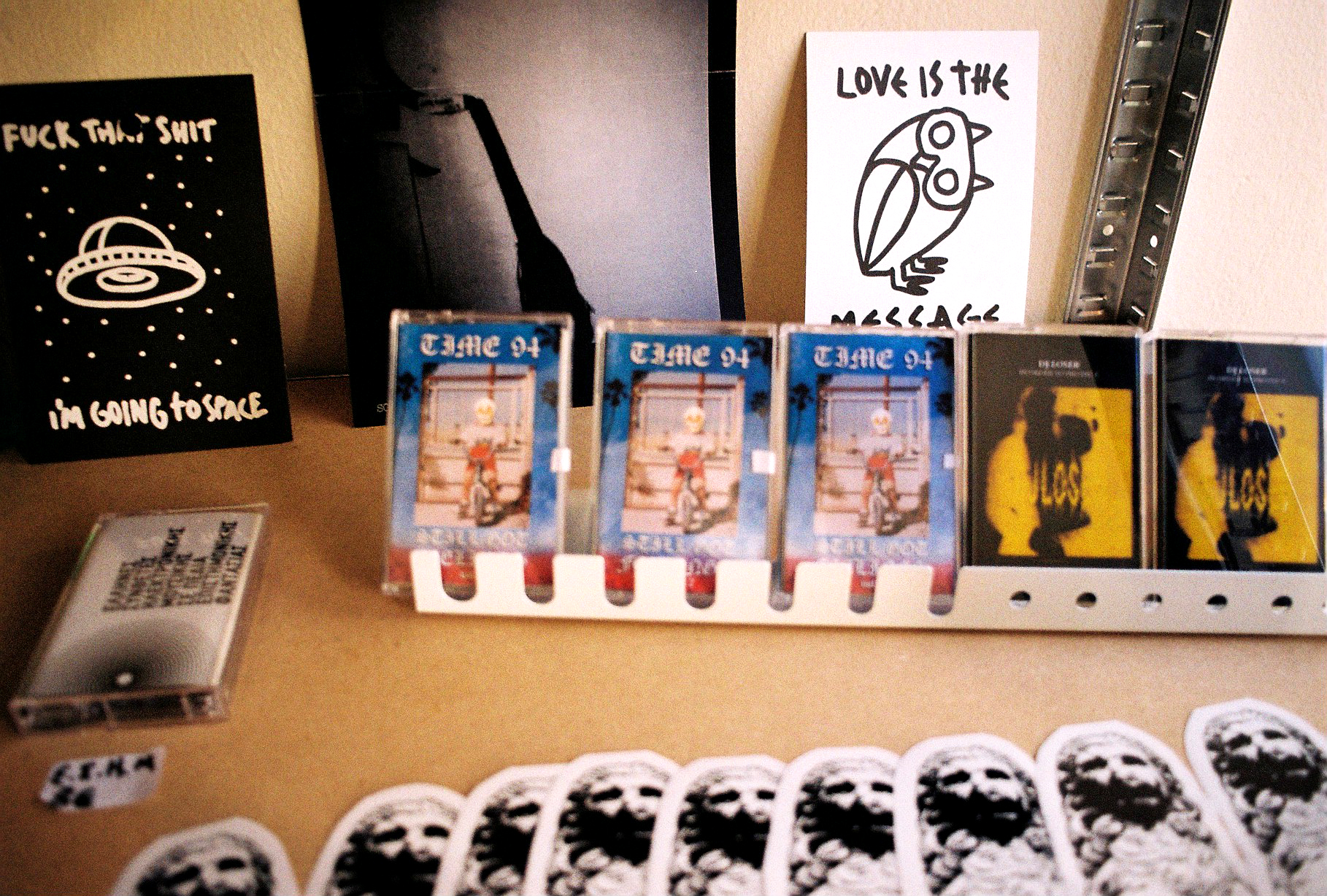 But events in industrial and experimental techno and their seclusion to dark indoor clubs is not something that finds a natural home in Athens, which largely represents the contrary, with its sun, its elderly population, and its habit of seeking to the lively streets at night.

“This kind of techno hasn’t had a room and space in Athens, because it comes from the North,” he continued. “It’s not really us – it’s not very natural for Greek people to be into.”

Therefore, the increasing interest is not to be confused with a big scene – it still remains somewhat of a micro-climate: “Having a lot of parties doesn’t make the scene big… But the good thing about Athens is that we’re all gathered, the house guys, the techno guys, the experimental guys. We’re all friends, and we support each other.” 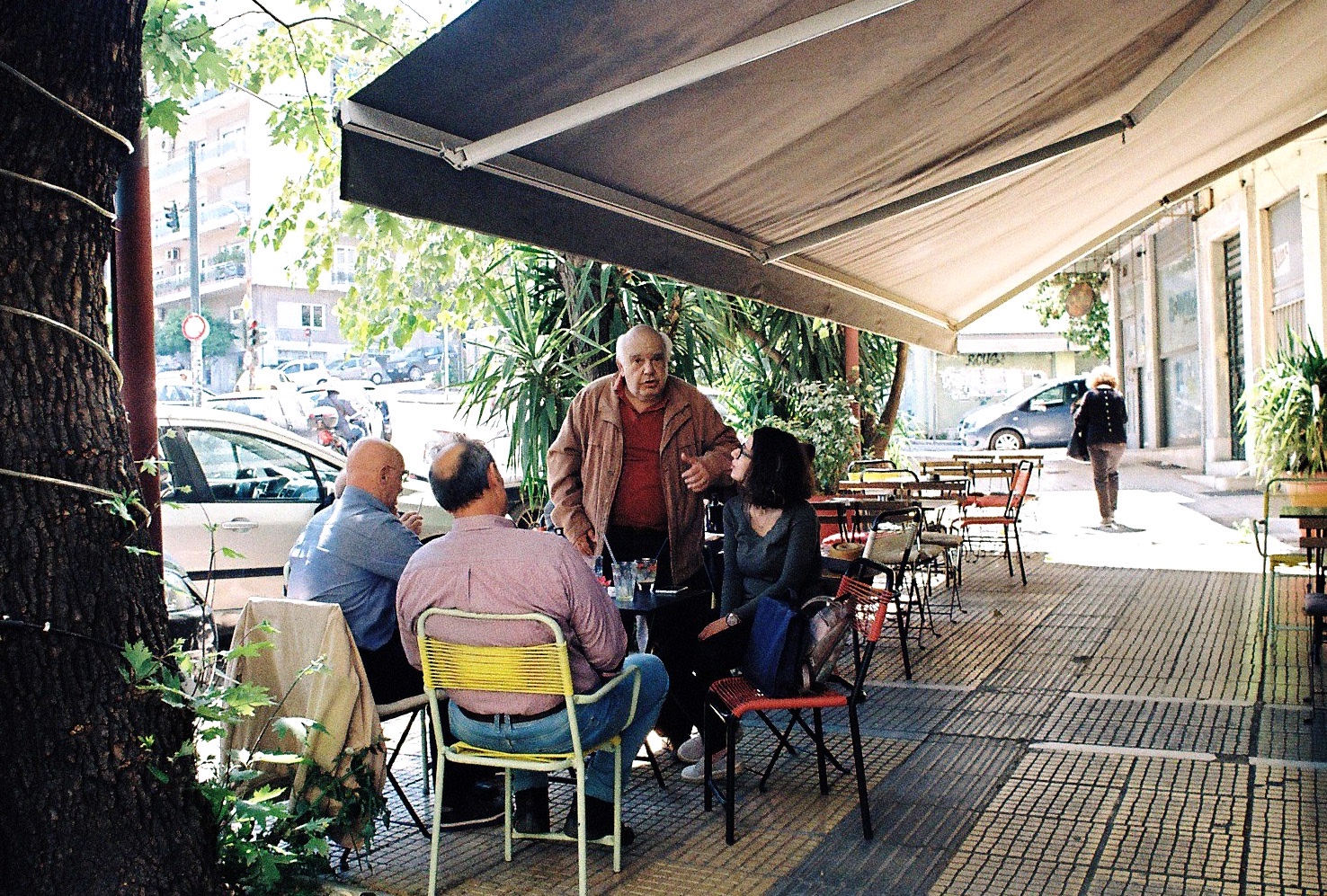 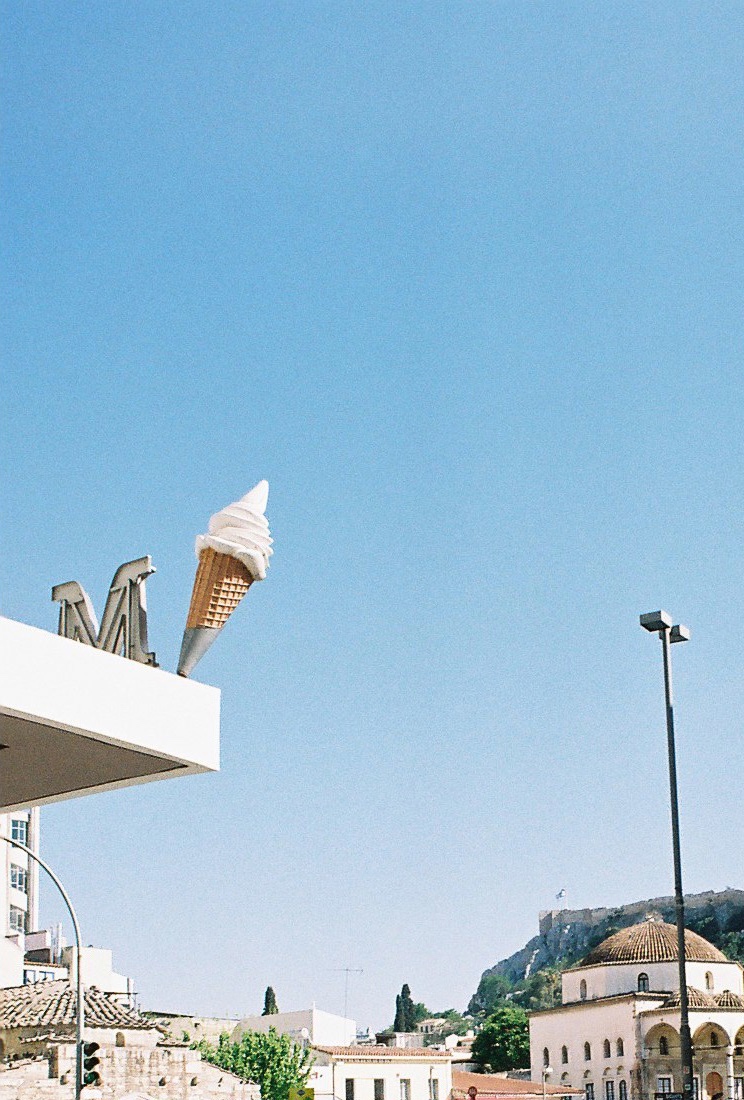 On a calm afternoon at Habeat Records, Athens’ only shop for only electronic records, the owner Lefteris addressed another inescapable factor for the thriving of darker clubbing cultures. Over and above digitalisation, the deep economic depression that has held the country in a tight grip for years is not to be neglected. Its surging youth unemployment rates still linger around 44 per cent, despite a steady decrease in recent years.

“After a crisis, there is always a lot of creativity – people get inventive and find out how to do things with less money,” mused Lefteris. He was sat in an armchair by a set of large open windows facing the humming café street below us. Located on the second floor, to get into his shop, you have to be buzzed in from an anonymous-looking hallway in the city centre, where offices and shops shoulder abandoned buildings. Some are left to decay to mere rubbles. 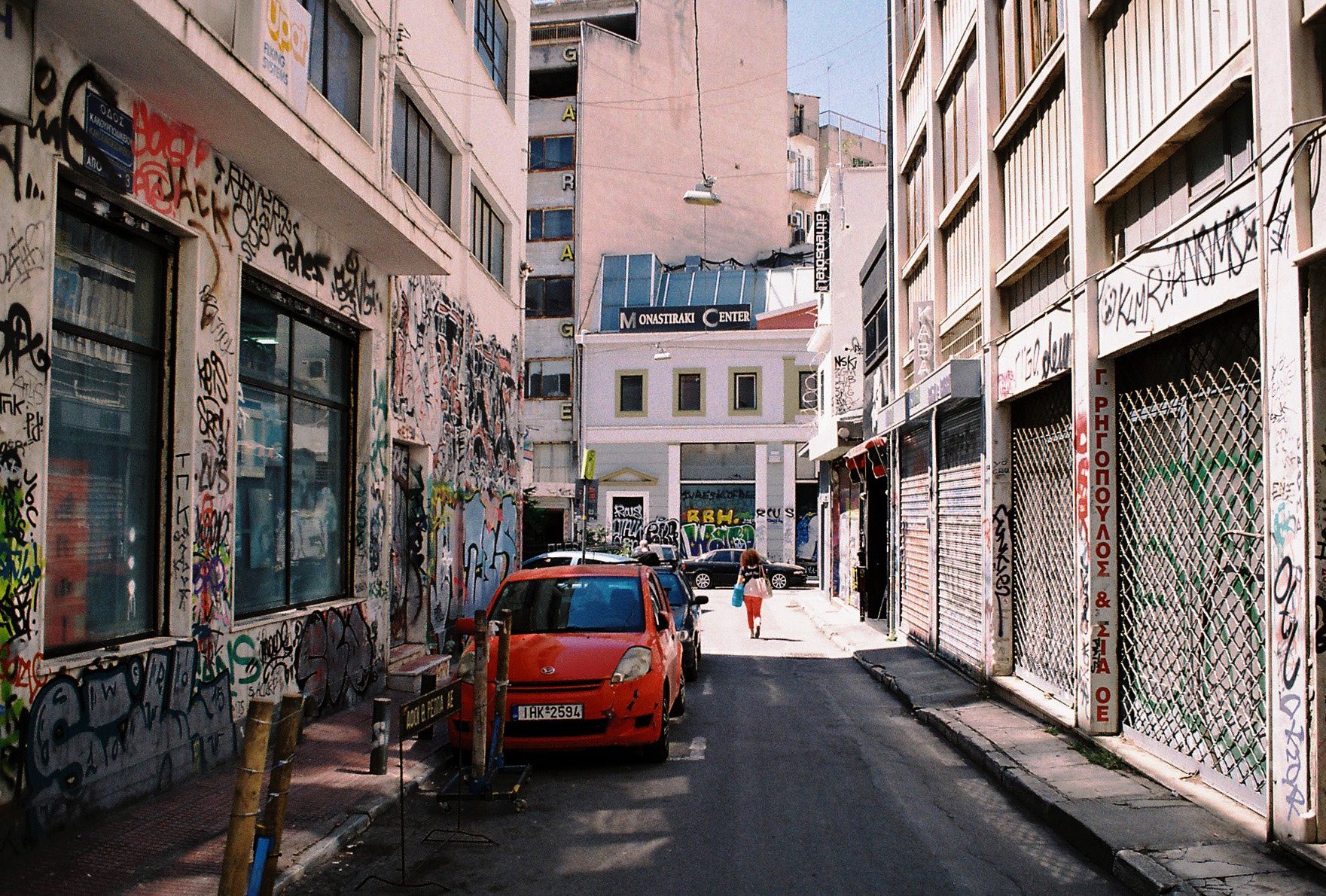 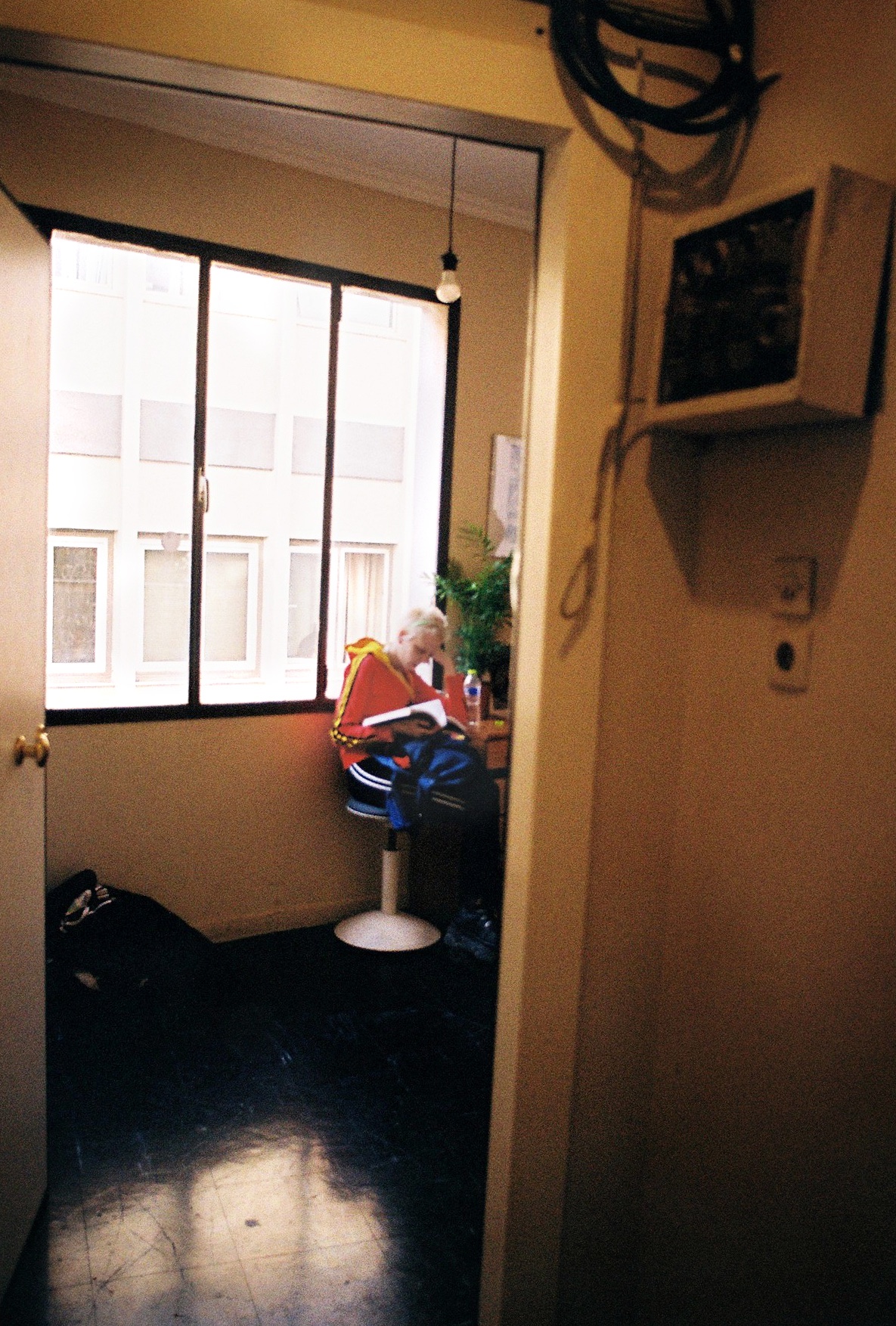 According to Lefteris, Athens has seen a small explosion of new labels mushrooming in the electronic scene; “The crisis came at the end of 2009. Imagine, until 2010 there were just the basic electronic labels – about 15, maximum 20 of them I think, and they had been there from the ’80s and ’90s. But from 2010 until now there are more than 35 new, so the expansion is huge!”

In 2010, Lefteris himself faced the reality of the crisis as he moved to Athens with the purpose of opening a record store. At that time, three of the main record shops in the city were being forced to shut down. But nonetheless, he proceeded with what he was determined to do, and to avoid walking headfirst into certain disaster, he initially opened a small bar in Exarchia. Catering to the Greek love of a good party, the bar would host events every night, and that generated just enough income to sustain a built-in record shop on the floor above.

“From hip-hop to reggae to disco, house, techno, minimal, I invited every DJ that there was in Athens. And after nine months, when I noticed the record store was working as I wanted, I closed the bar and moved to this place instead.” 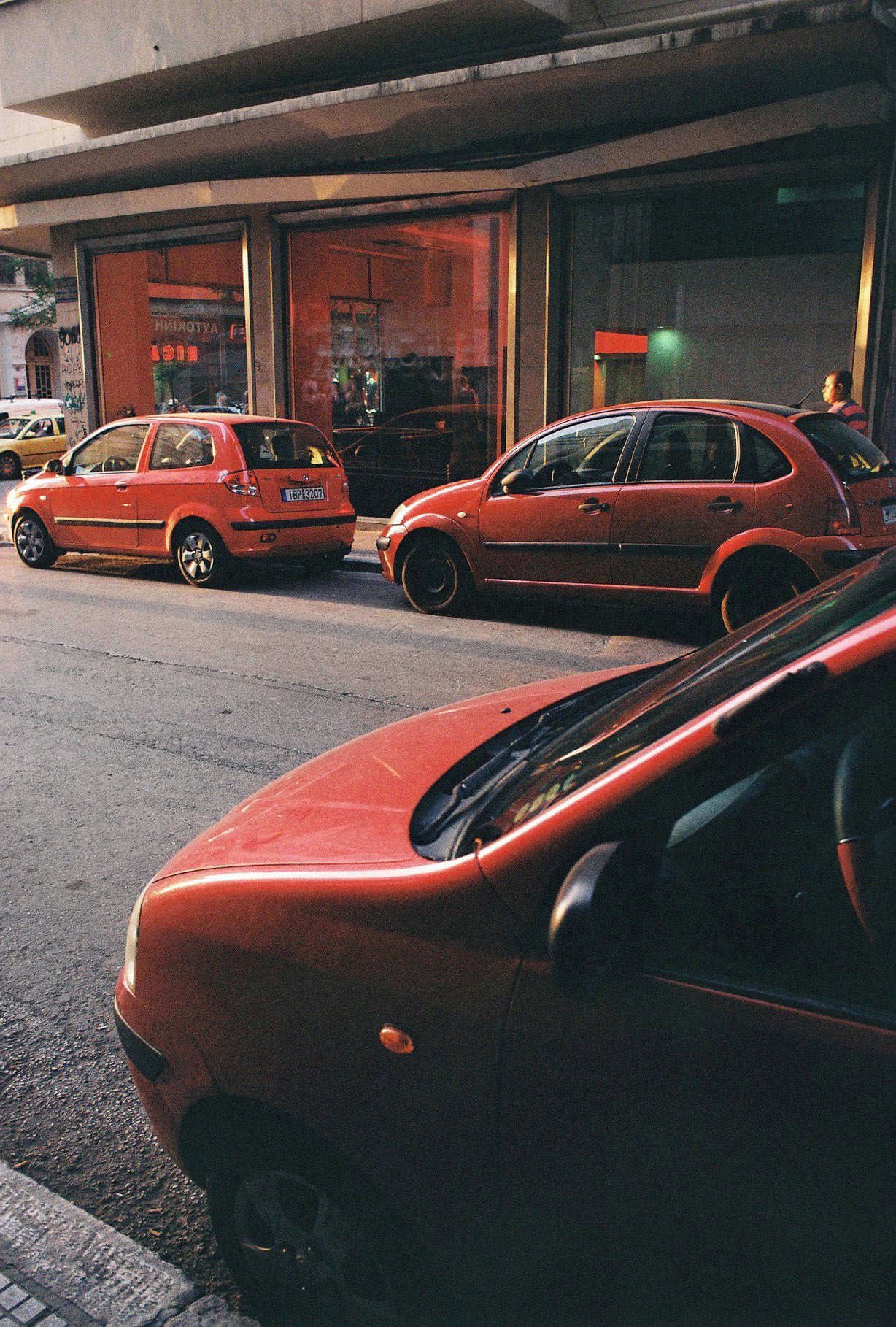 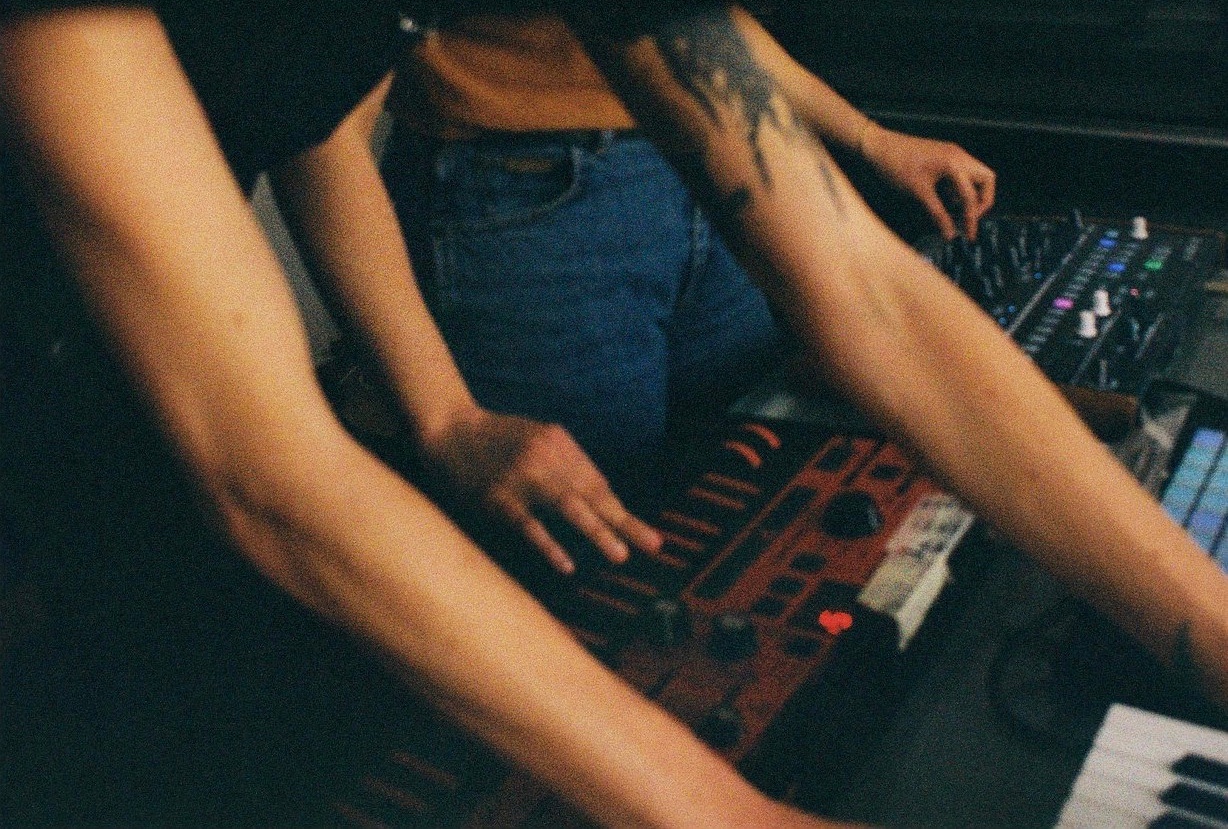 Crisis or no crisis, the relentless dedication to obscure and experimental electronic music is hardly ever a profitable endeavour in any commercial sense. And the impression people in Athens give off, is that it’s not what matters either.

“Starting a label is suicidal either way!” the producer Astytekk said jokingly about his struggles with his label Lower Parts, adding that the music they release is cut and distributed in a small number of copies that cannot secure much more income than what covers the cost of production. “I do my 9-5 job on the side, and all my money goes into this instead of a therapist.”

Just like him, others told me with no sign of remorse how they have essentially worked two jobs for many years – one allowing them to survive, and the other to live out their passion for creating an alternative to the mainstream. Some even told me of opportunities they have had to scale up activities that could’ve become a stable income source, which they turned down purely out love for the original atmosphere.

In the company of my two hosts, a week in Athens passed quickly with meeting people, eating souvlaki and exploring music. While the city might not become a world techno capital in the near future, its rebellious undercurrents definitely gave the scene a personality of its own, well worth an occasional trip or two. And as I parted with the city with my bags full of cassettes and olives, I hoped to make it back again soon. 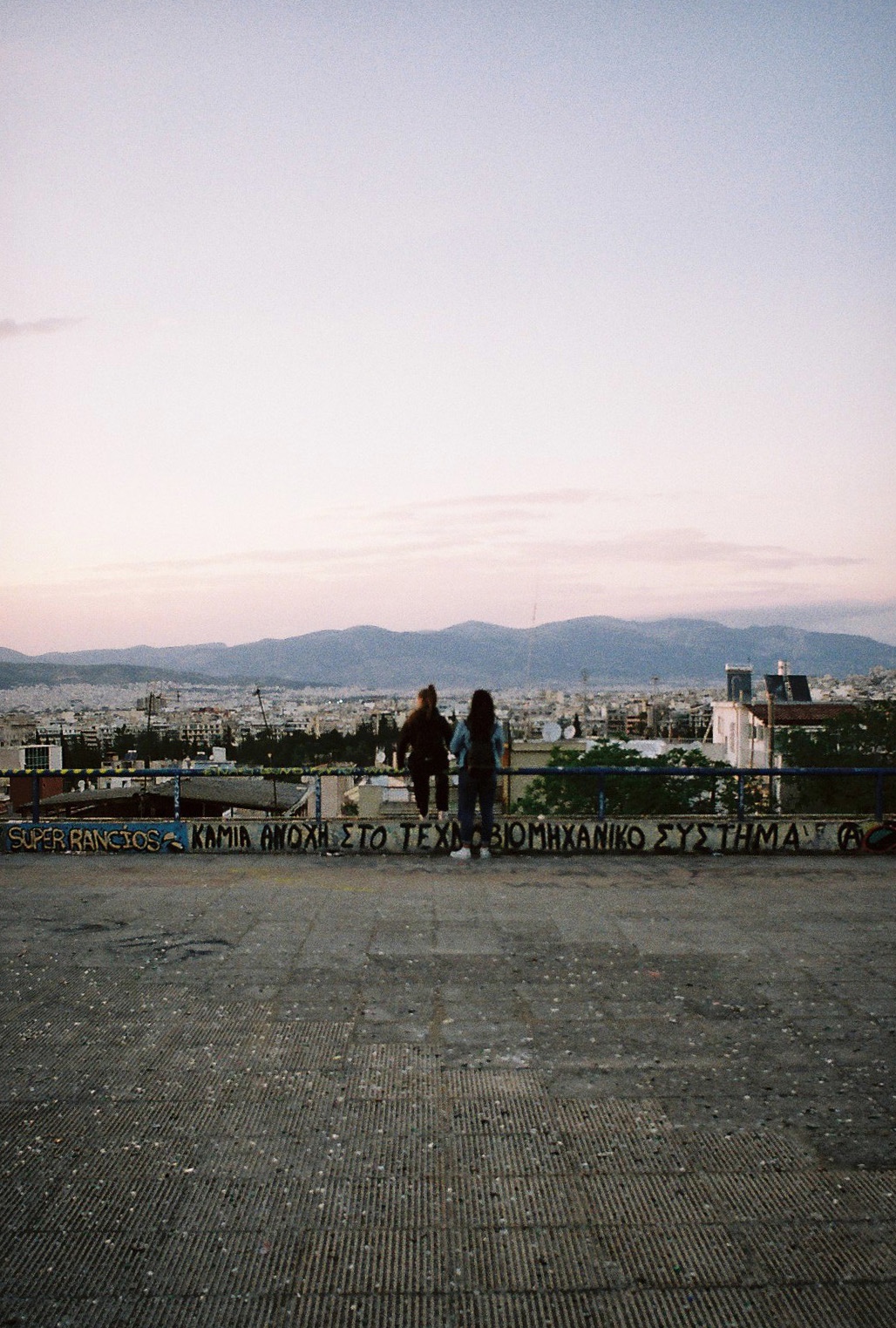 Linkedin
RELATED ARTICLES
OTHER ARTICLES
Wealth inequality and the rising cost of socialising is placing a strain on people’s relationships, reports Eve Upton-Clark.
LGBTQ+ students are keeping the spirit of the original Pride alive by fighting for liberation for everyone, not just their community.
Finland-born photographer Sirkka-Liisa Konttinen looks back on her decades-long documentation of life in Northern England.
Photographer David Hoffman recalls documenting the extreme wealth inequality around Tower Hamlets and Hackney int the 1980s.
A new edition of a seminal book brings together iconic images of the band onstage in their full glory and backstage in moments of unguarded camaraderie.
Thomas Hoepker‘s images taken during a road trip across America provide a searing social commentary about a divided country.