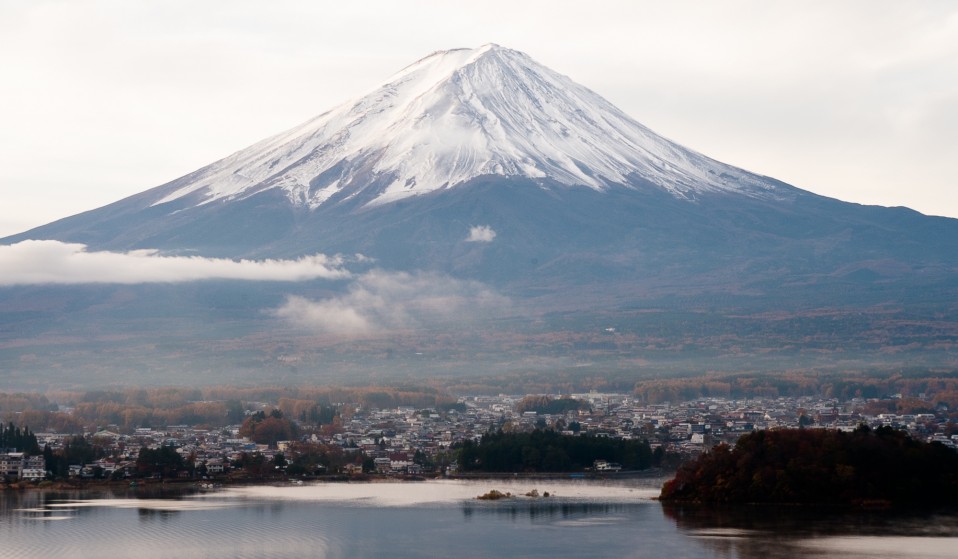 Cole Giordano heads to the lesser-explored corners of rural Japan, from the crystal clear creeks of Jinba Falls to the ghostly shrines of Fujiyoshida.

Cole Giordano heads to the lesser-explored corners of rural Japan, from the crystal clear creeks of Jinba Falls to the ghostly shrines of Fujiyoshida.

I woke up at six am Tuesday morning and opened the blinds of my hotel room at the Hoshinoya Resort to let in the morning light. There, filling the window, sat Mount Fuji. It was over 30km away, but its presence was immense, confident, and godlike. One of our guides had suggested that maybe Fuji was better to look at from afar than to try and climb, as so many thousands do each year. I had learned that the hard way nearly 10 years ago, when a typhoon stalled my attempt after six hours of hiking overnight through torrential rain. So now, standing in my room admiring it from a distance, I was inclined to agree with her.

The first time I came to Japan was in college to study abroad for a semester in Tokyo. I instantly fell in love with the city, the culture, and the people. But as many can tell you, its energy can be formidable and combative, even for someone from New York. A fellow student of mine in the program said of the often overly stimulating city, “there’s no dimmer switch here – only on, or off.” While that statement rings true for much of Tokyo, once you step away from the overwhelming crowds of Shinjuku and the mountain-sized arcades and neon signs of Akihabara and Shibuya, there is space that operates between off and on. 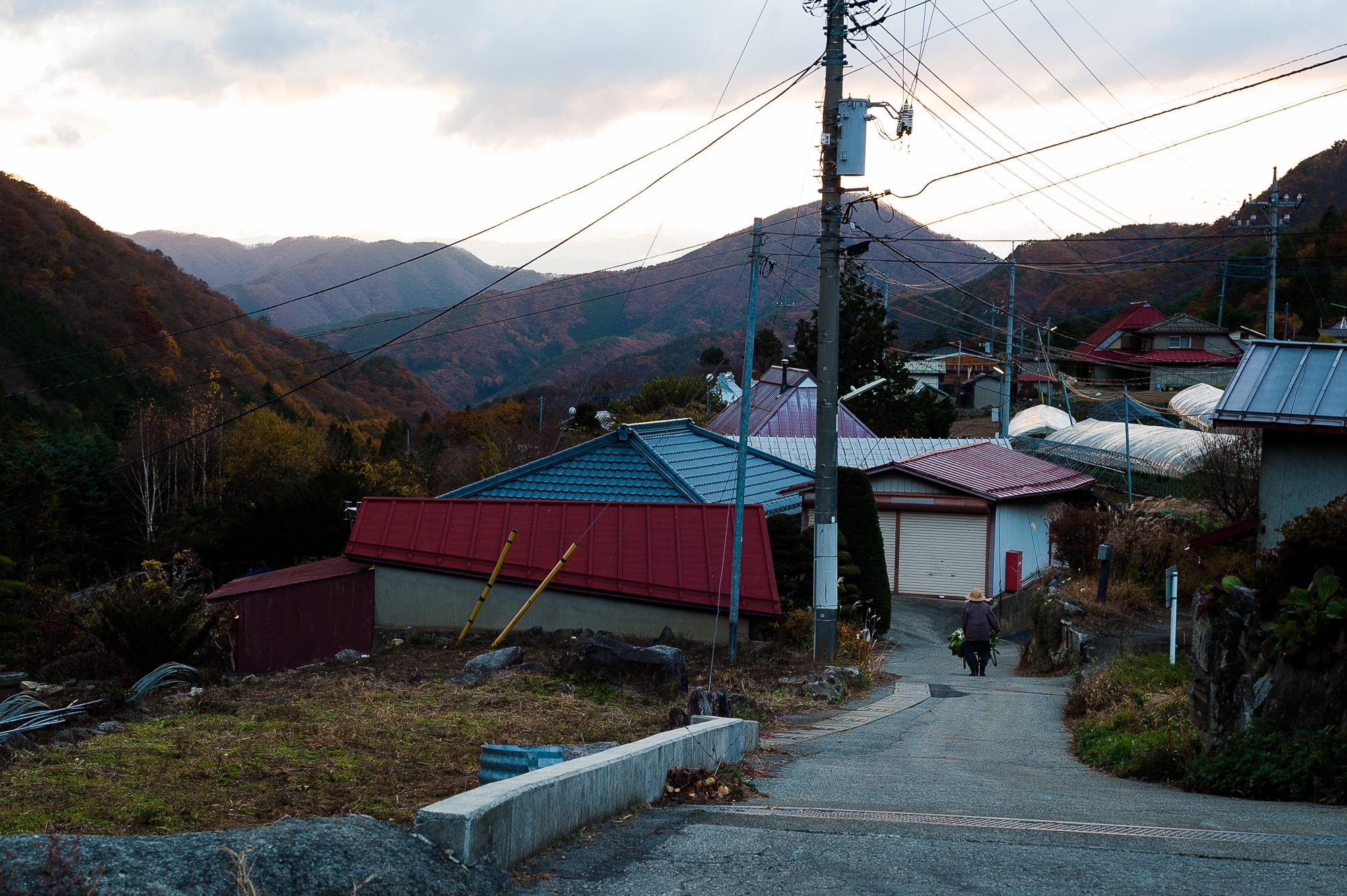 En route to Yamanshi by Train from Tokyo.

Accompanied by two other journalist and regional guides, I recently spent eight days travelling through three of the prefectures surrounding Mt. Fuji, to move away from Tokyo’s dazzling metropolis, and experience life in the shadows of the mountain.

We began in the hills of Yamanashi Prefecture. North of Mount Fuji sits the small town of Ashigawa. Tours led by The Grand Circle Travel Corporation are currently the only way for tourists to access this town, but in spite of that, the town receives about 2,500 visitors from the US alone each year. The village is dependent on that small amount of tourism and hopes to generate more.

Most of the young population leaves the town for school or work, making Ashigawa a primarily elderly community. Our contact emphasised that visitors are not only welcome for the economic boost they bring to the town, but also for the enrichment they bring to the lives of the locals. For the older townspeople, getting to speak with new visitors, especially foreign ones, provides a sense of excitement and a brief departure from what can be the stagnant realities of everyday life in a small mountain village. 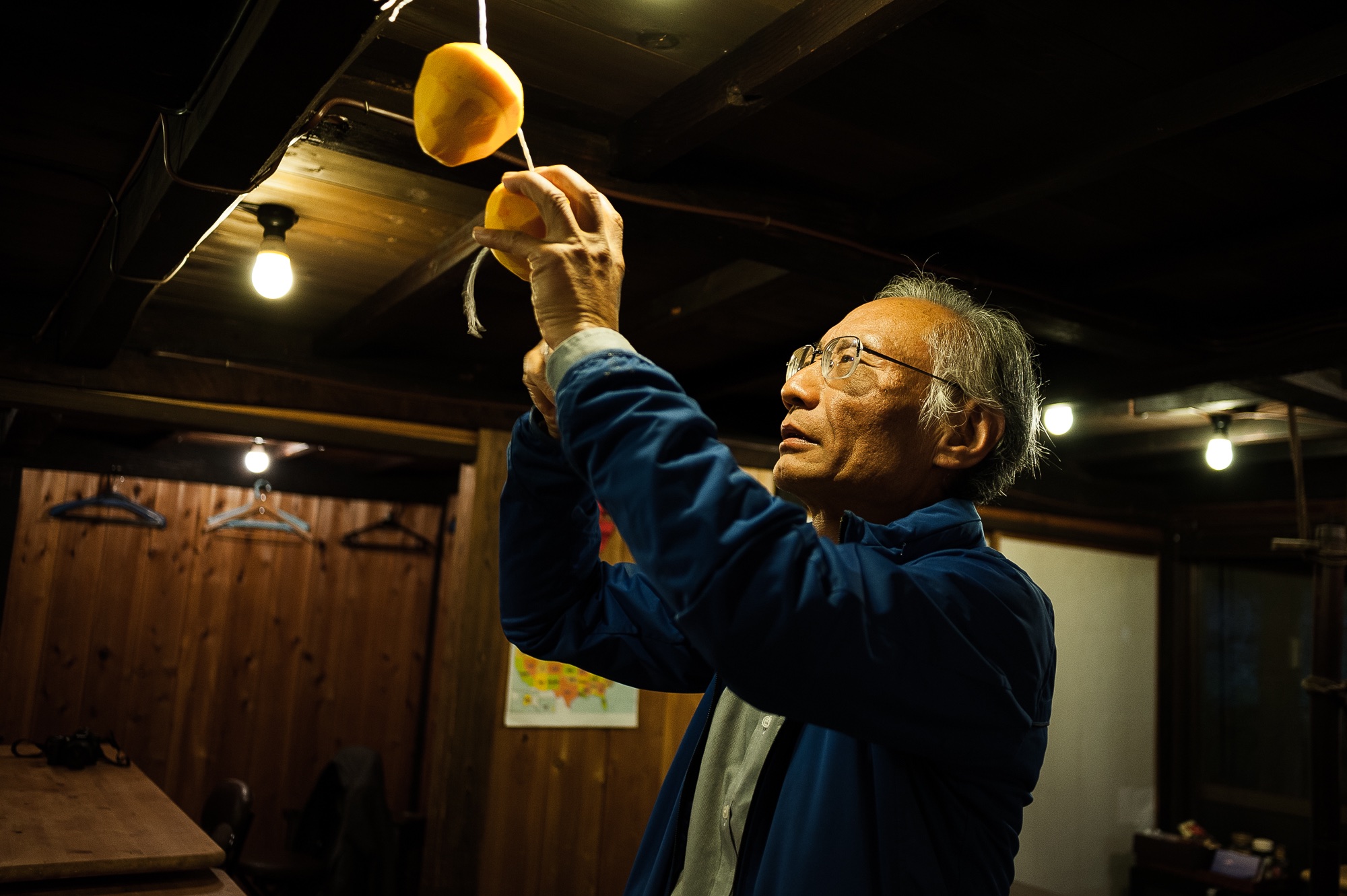 Within the community building, a local man hangs persimmons to dry on string

Closer to Fuji’s base, in Fujiyoshida, lies the Arakura Fujisengen Shrine – built as a place to pray to the spirits, or kami, of the mountain. At Fuji’s summit, are eight smaller peaks. A devout sect of worshippers, known as Fujiko, roughly translated as the children of Fuji, believed that kami reside in each of these peaks. Members of Fujiko groups often made pilgrimages to Fuji and stopped here on the way to worship the mountain deities.

Sitting further up the hillside overlooking Mount Fuji is the Chureito Pagoda, home to one of the most famous views in Japan. Our view that day was obscured by clouds and light rain, but the omnipresence of the mountain could still be felt. 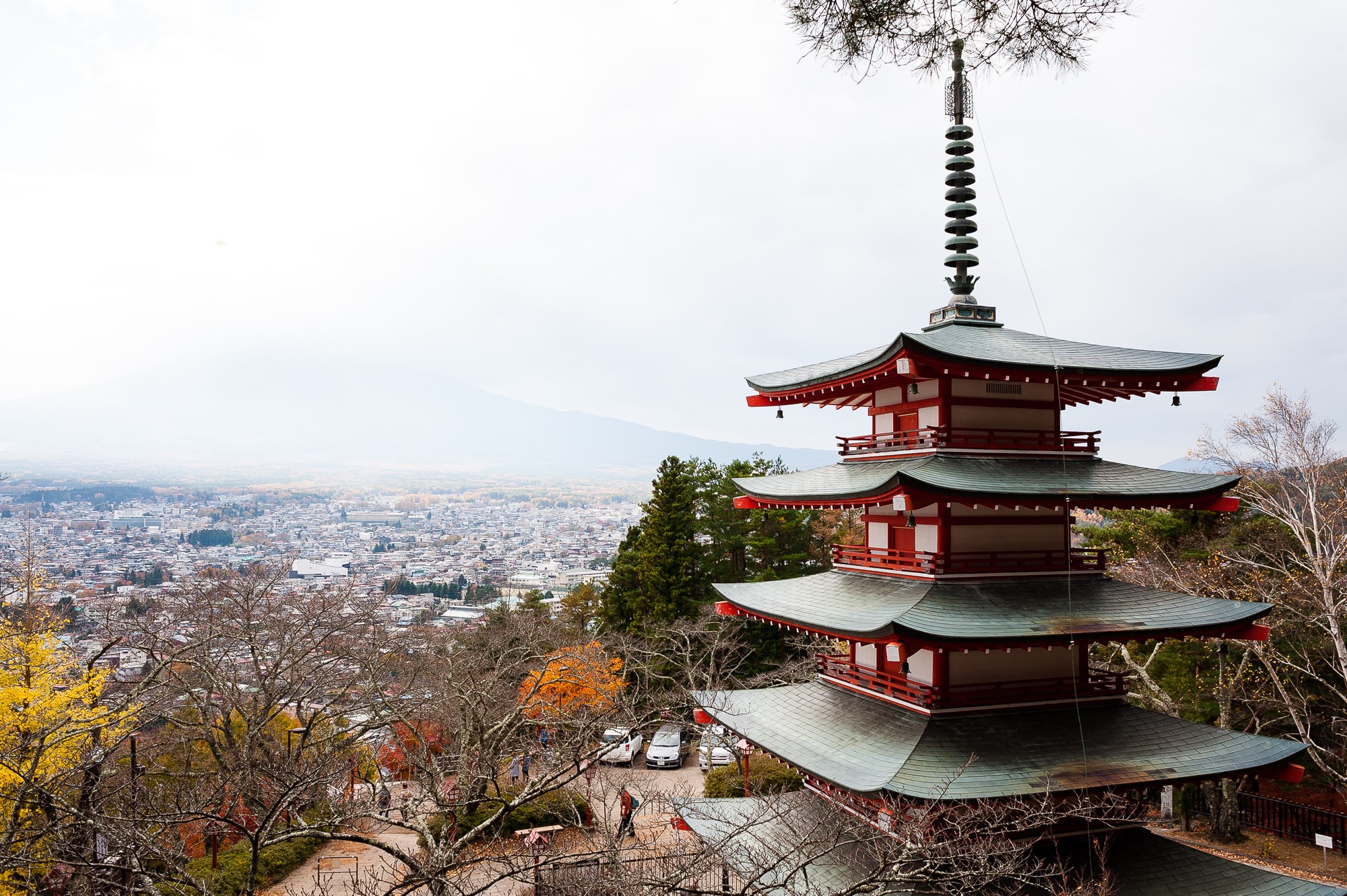 Continuing to trace the path of the Fujiko, we stopped at the Togawa Oshi House –  the only remaining fully intact inn where Fujiko stopped to rest before beginning the climb to Fuji’s summit.

Standing at the base of the mountain is the Kitaguchi Hongu Fuji Sengen Jinja Shrine. It is the only shrine with a direct entrance to the trail to the summit. Here, travellers would make one final stop to pray and make offerings to the Fuji deities before embarking on the path to its peak.

It wasn’t until the next morning that weather cleared and Fuji appeared from behind the clouds. Despite being in a somewhat mountainous region, Fuji stands alone – a Japanese Olympus towering towards the heavens. 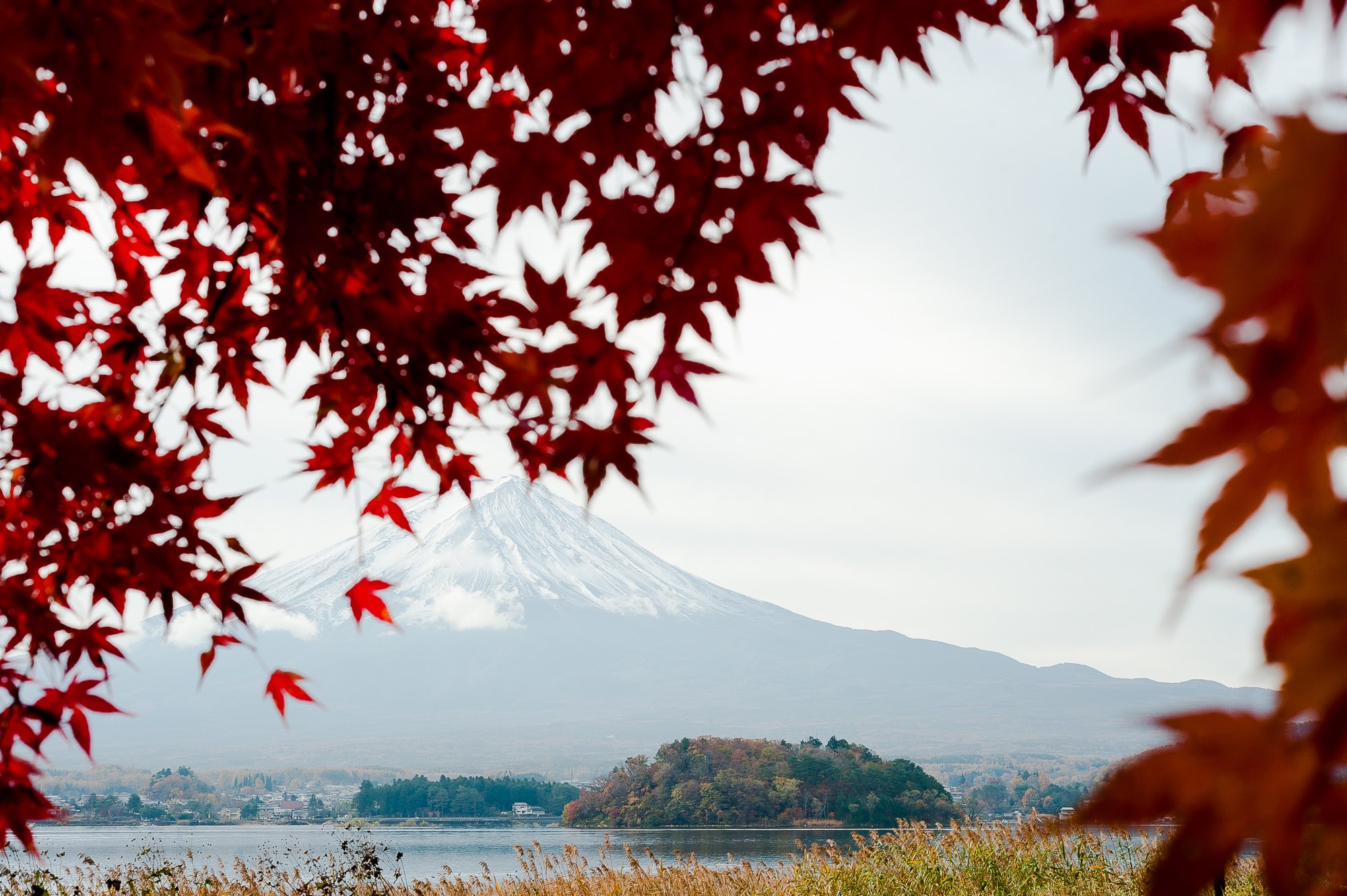 As important as Fuji is, so is the matter that flows from it. The water that runs from the mountain through streams and rivers and up from the ground’s springs to the surrounding farmlands has deep spiritual meaning to the people who live and work on the land.

At Jinba Falls in Fujinomiya, crystal clear water streams down and flows into the creeks and rivers of the nearby countryside, enriching the surrounding farmland. Takashi Uematsu, 78, is a prize-winning rice farmer. His land, which sits a short walk from the falls, produces rice for the Emperor of Japan. Each individual grain of rice is inspected by hand. It takes 24 people seven hours to produce a 1.5kg bag of rice for the Emperor. In addition to a lifetime of perfecting farming techniques, Takashi believes that the purity of the land and water from Fuji, visible from his farm, is what makes it so exceptional. 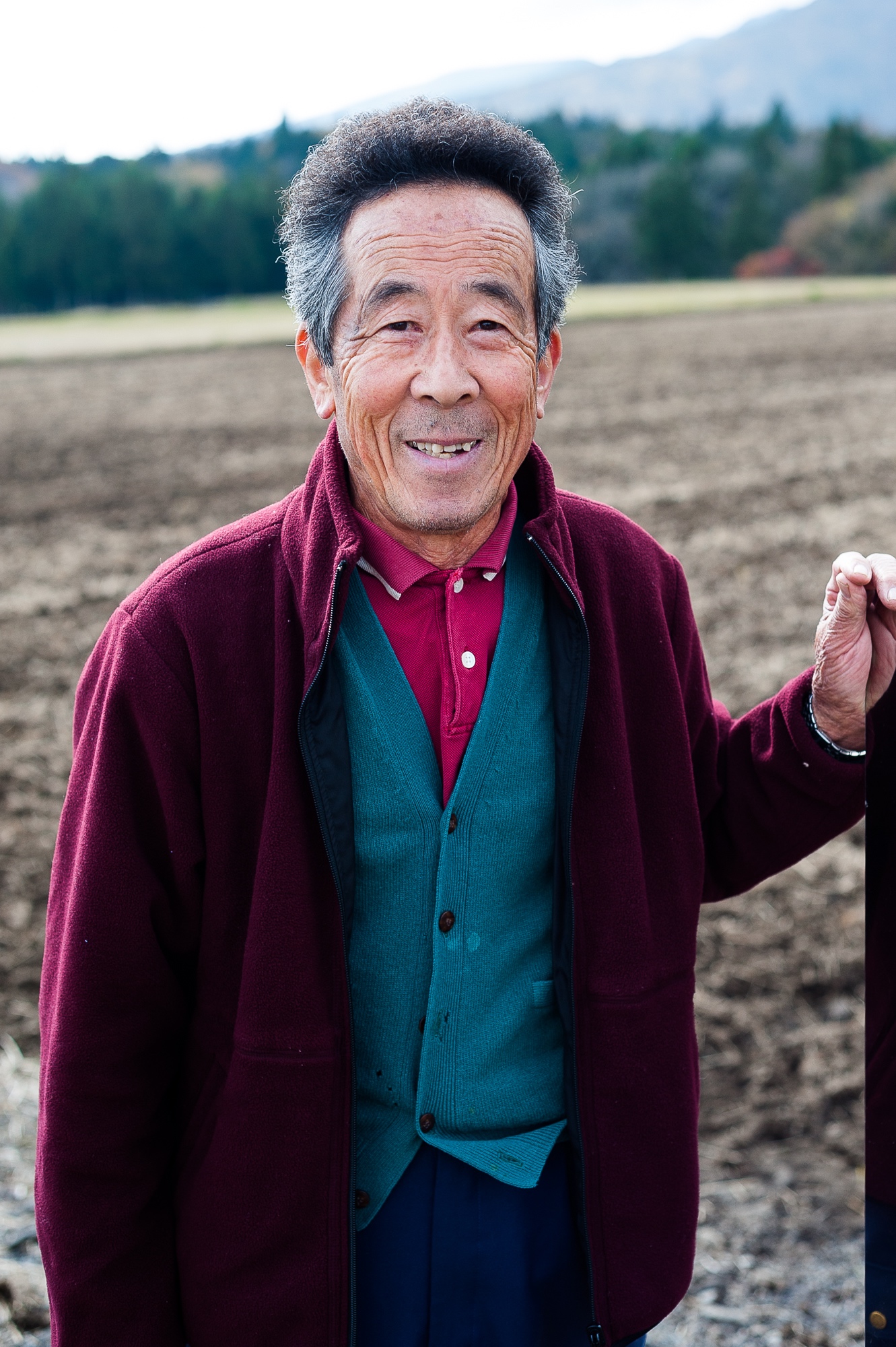 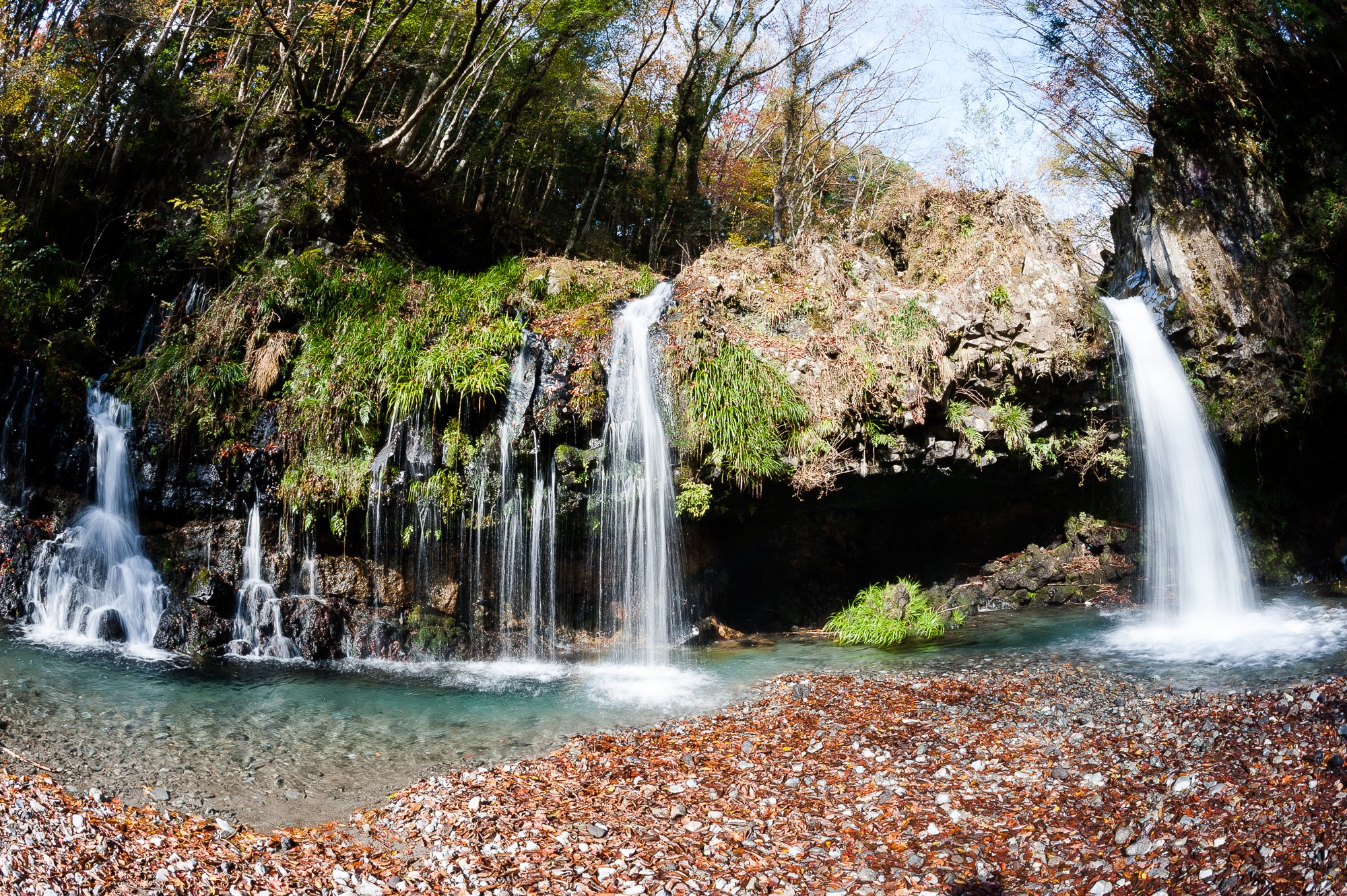 In Shizuoka Prefecture, south of Yamanashi, is Mishima: “The City of Water.” Here the spirit of Fuji flows through the city’s canals, lakes and waterways.

Like Jinba Falls, the water is pristine and the city’s inhabitants are both proud and immensely respectful of it. “Clean water reflects spirit and mind” is written on stone monuments. Spouts, where you can purify yourself with water, are enshrined at park entrances. Children swim in the rivers and office workers soak their feet in streams during the heat of summer.

Making our way east, we stopped at a farm with its roots firmly planted in Japanese history and tradition: The Katsumata Green Tea Farm – a 400-year-old tea farm run by Tomomi Katsumata and his father, Hatsuro Katsumata. Descendants of samurai, they are the 17th and 18th generations to operate the farm. 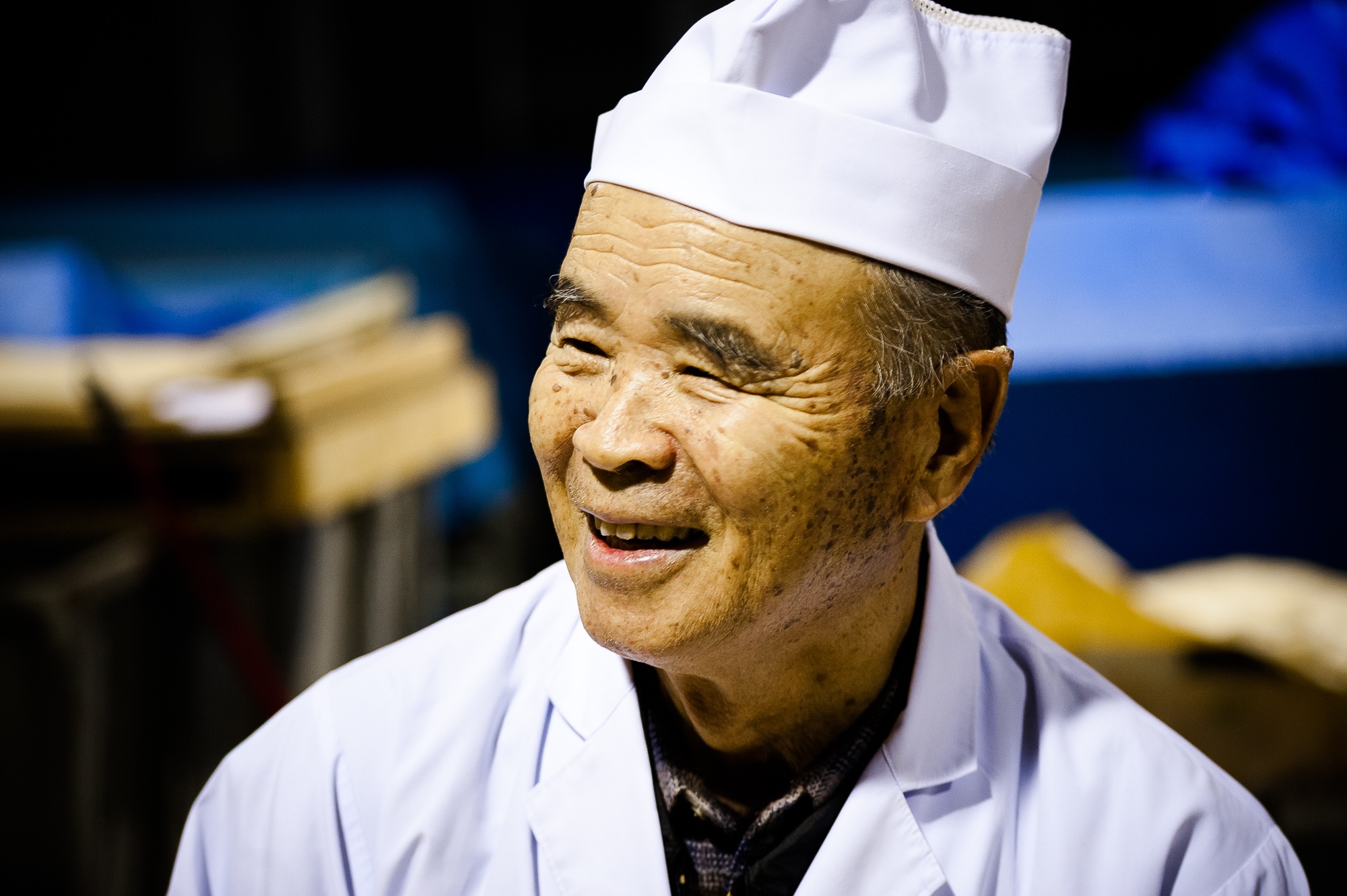 Hatsuro Katsumata is not only a master treasure hunter, but also one of 20 Master tea rollers in Shizuoka. His hand rolled grean tea goes for $120,000/kilo

Continuing east back towards Tokyo, we stopped at the monumental Odawara Castle in Odawara City, Kanagawa. The former samurai stronghold is the seventh largest castle in Japan and the first in Kanto. Sitting at the edge of the eastern region of Japan, it was established as a defence against the western region and was the last castle to fall before Japan was united. 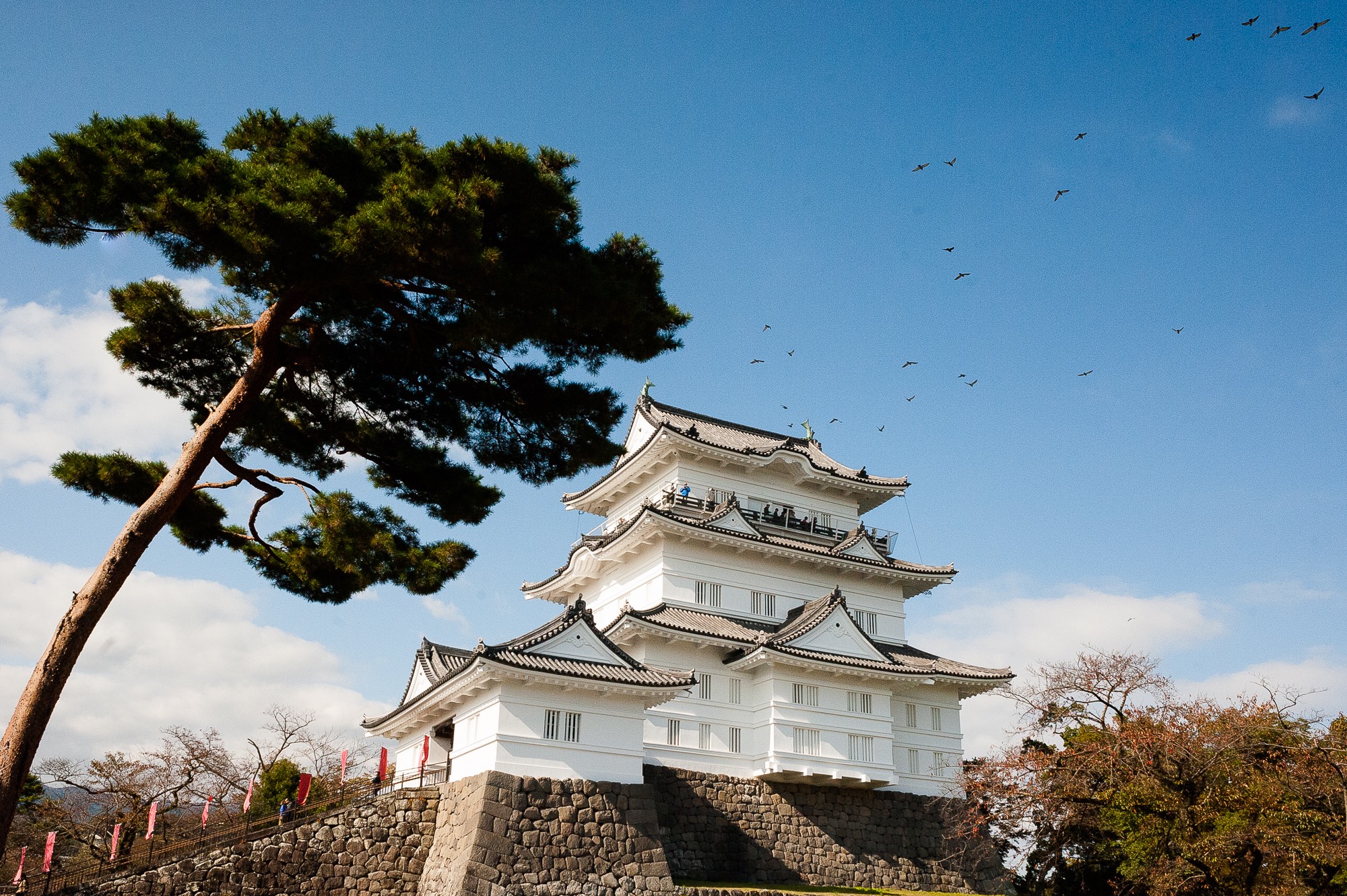 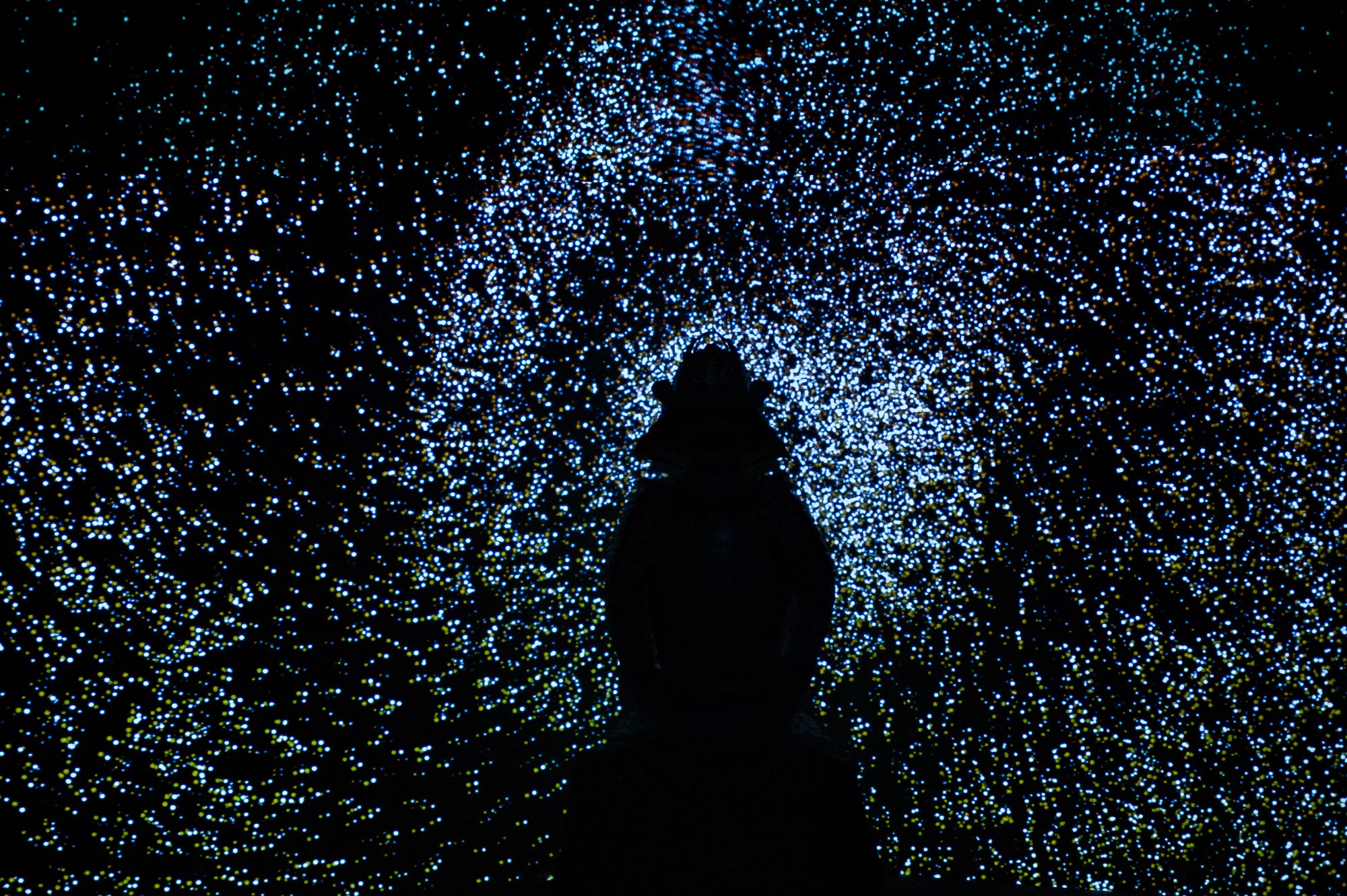 An exhibit at Odawara Castle shows the story and spirit of the Samurai – Odawara City, Kanagawa.

Between the impressive castle in Odawara and the Fuji-water rich farmlands of Gotemba rests the small mountain town of Hakone. Historically, Hakone was the first major checkpoint to the countryside that travellers would encounter when heading west from Tokyo. As a result, the quiet town, surrounded by lush forests and Lake Ashin, developed substantially. A peaceful town at the height of fall when we arrived, Hakone felt much like any mountain town you might encounter in Vermont’s Green Mountains. Consequently, it has become a popular weekend getaway for Tokyo residents who flock to see the fall colours the way New Yorkers head upstate to the Catskill region in the fall. 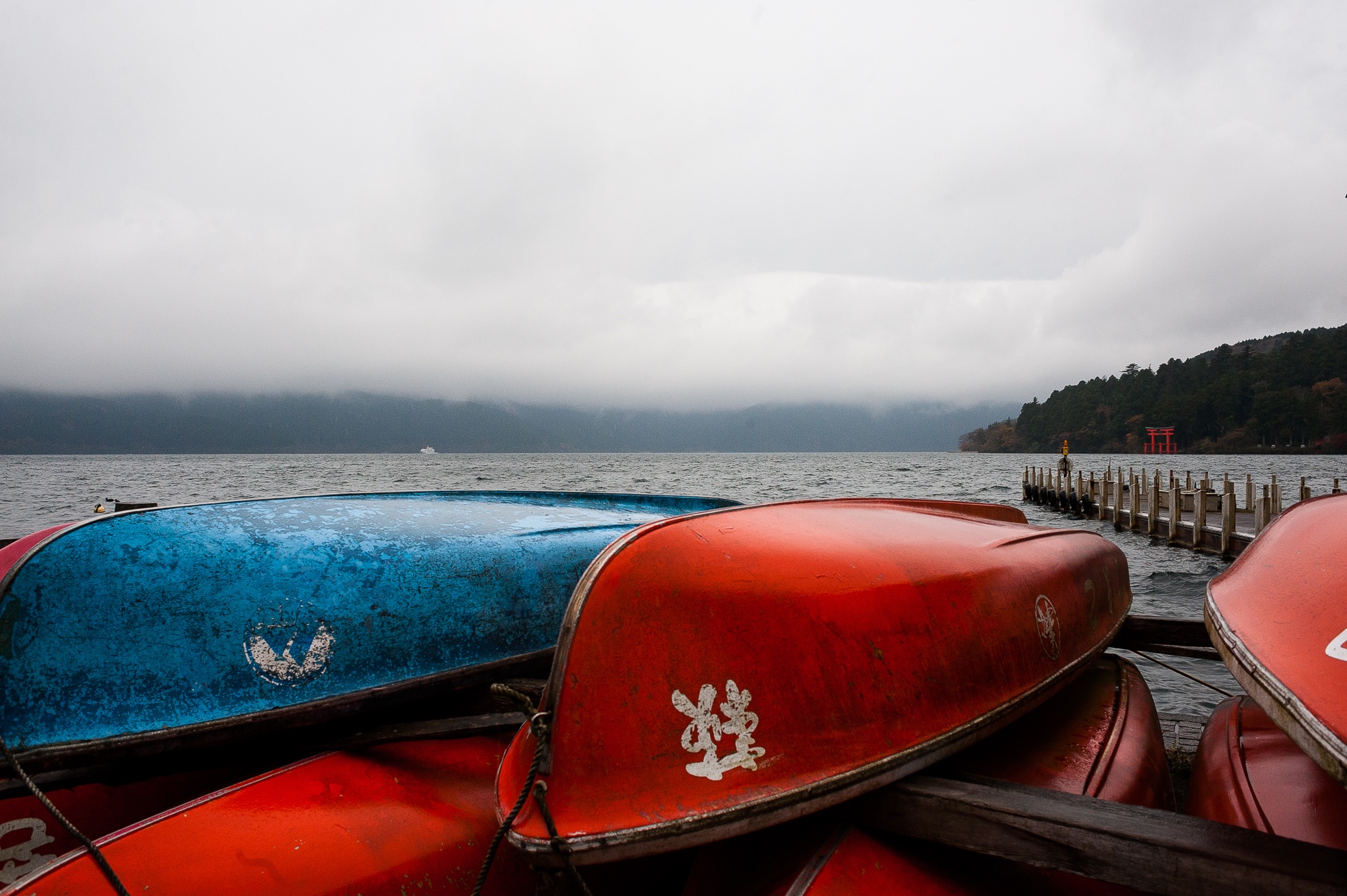 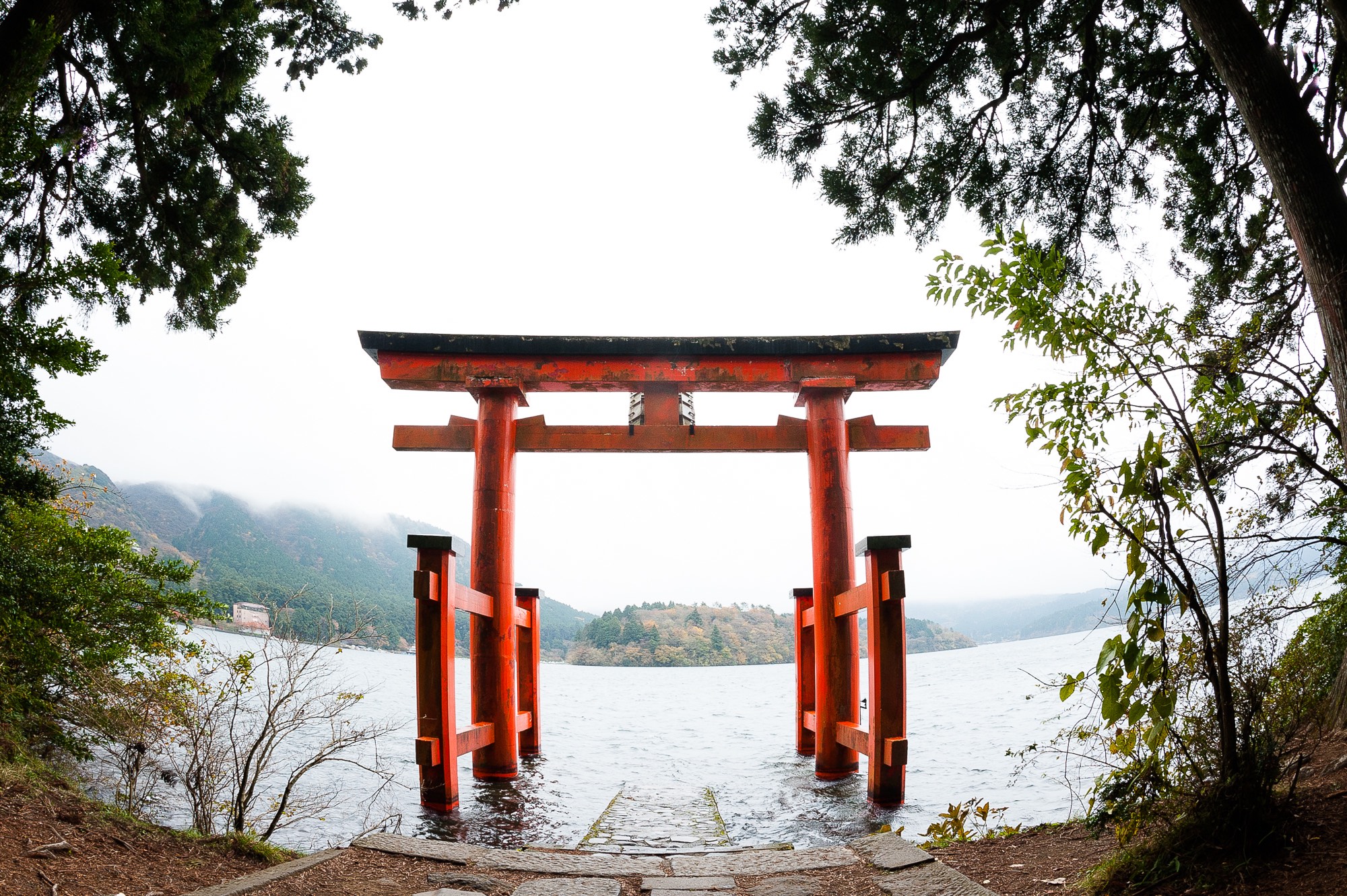 With Fuji fading into the distance behind us, we made our way towards Tokyo. But rather than diving in head first, we eased our way back into Japanese city life with a night in Yokohama.

The capital city of Kanagawa Prefecture, Yokohama is also the second most populous city in Japan following Tokyo. Despite having a population of 3.7 million people, it doesn’t feel nearly as dense or overwhelming as its big brother to the north. After a week in the countryside, it was a good stepping stone, its quieter, darker streets still offering plenty to explore. 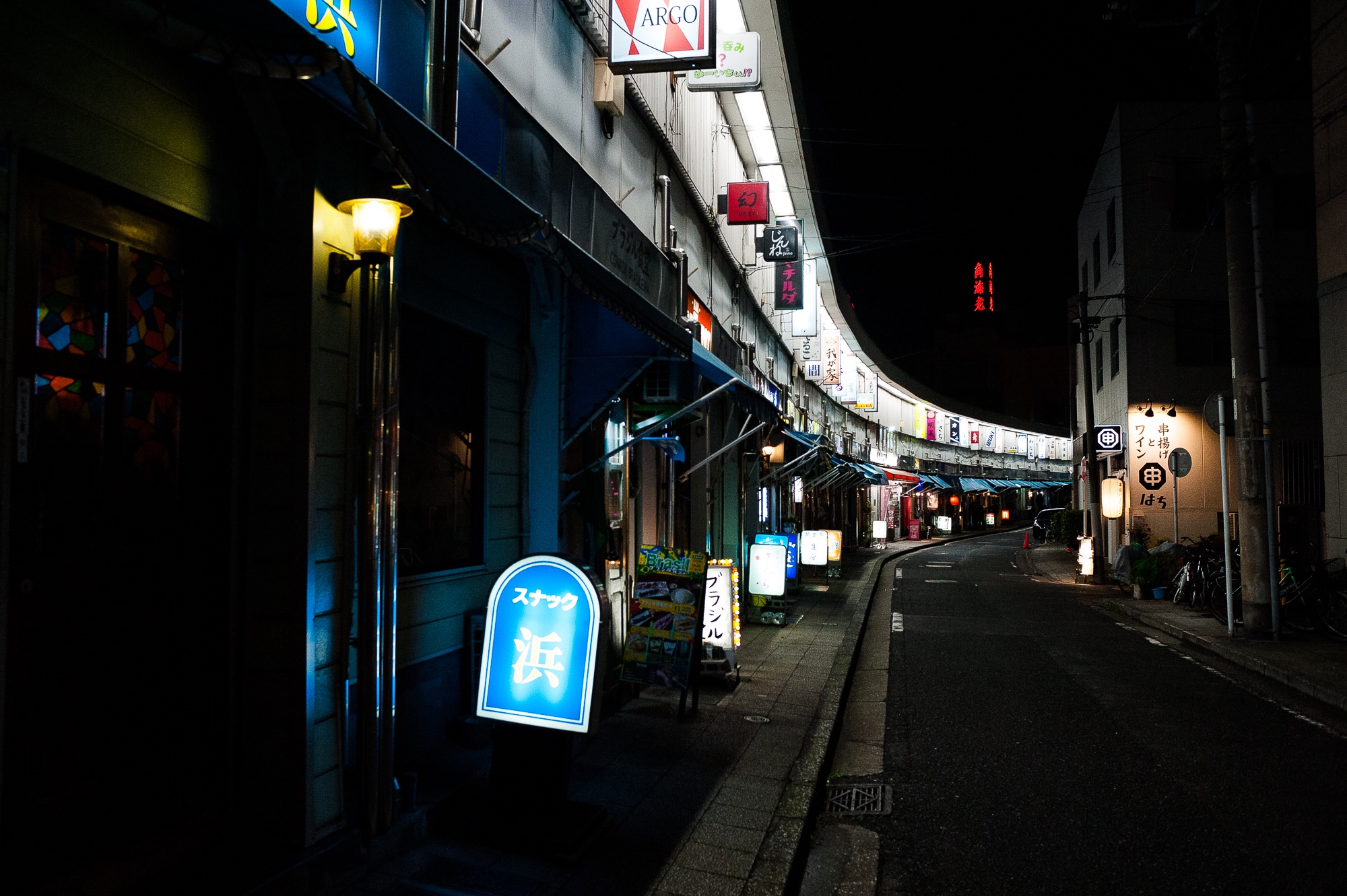 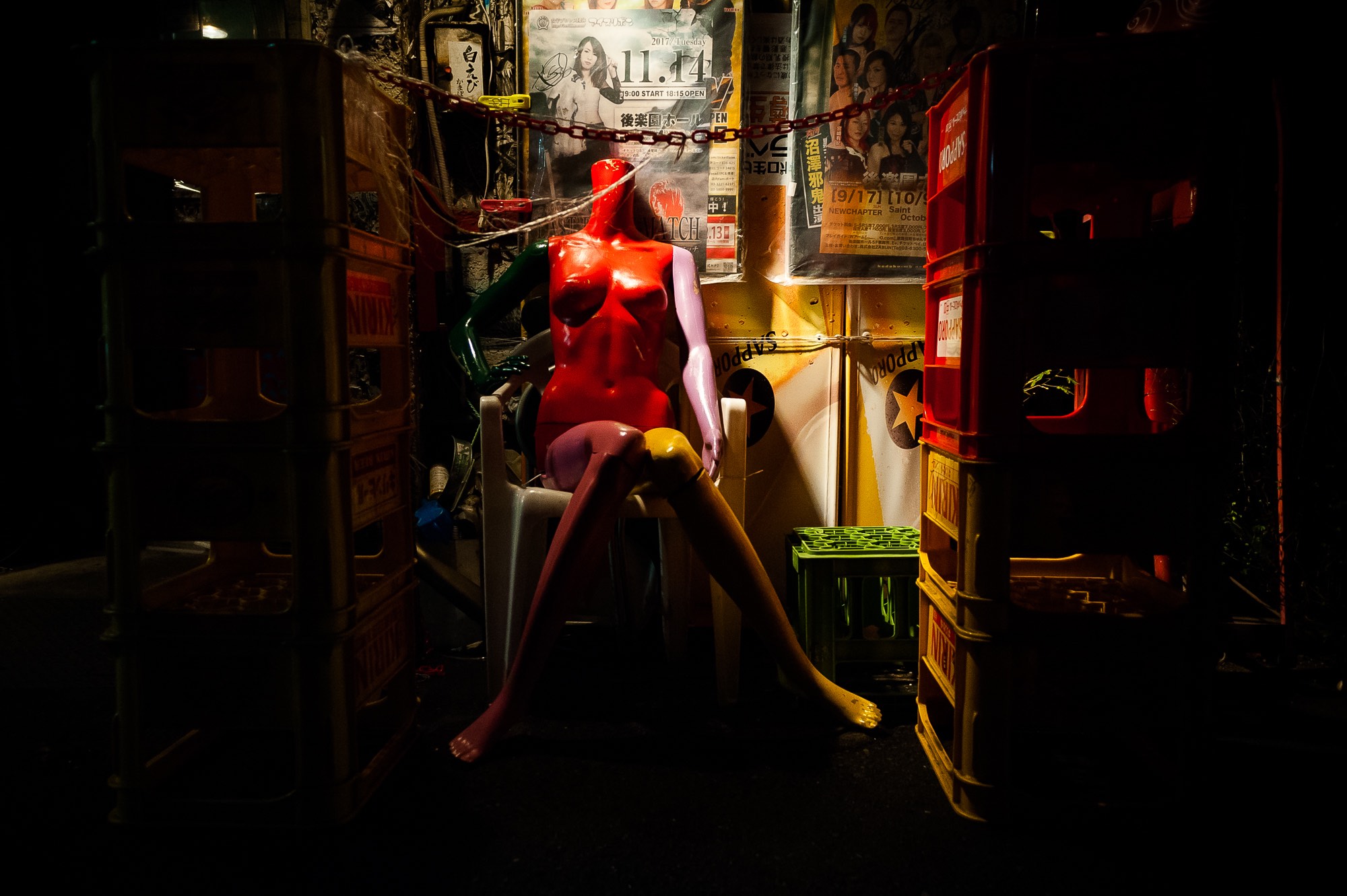 Miyakobashi Shotengai, for example, is a popular street for drinking and late-night encounters that started as a black market after WWII. Now lined with a seemingly infinite row of tiny bars, the street’s operations are above board and its character remains. Each bar has two floors, each about the size of a small kitchen, and overlooks the nearby Ooka River from the back.

When we awoke the next morning to leave for Tokyo, Mt. Fuji was still visible to the west. I recalled how even when I was living in Tokyo, on a clear day you could see the mountain from some buildings and train stations in the city. It struck me that you could take that spirit with you into the city, use that calming resolve as you wander its labyrinths of people and buildings, in the same way the Fujiko explored the Lava Tree Molds. Live life at full volume, but still grounded.

Linkedin
RELATED ARTICLES
OTHER ARTICLES
Thousands attended the annual event this year to wheelie through the city and call for ‘knives down, bikes up’.
The two-day long event returned to London this year, showcasing a spectacular parade, steel bands and Caribbean food.
Ahead of the release of their first collaborative album, the producer and rapper talk psychedelics and the state of UK hip hop.
Rhiannon Adam spent three months capturing an ageing society wracked by division, isolation, and the aftermath of scandal.
Sean Maung’s photos are a love letter to the Black and brown communities that make up New York.
Following the announcement of an 80% hike in the energy price cap from 1st October, crowds gathered outside the offices of energy regulator Ofgem to protest and declare their intention to undertake a payment strike.