Travel / The world’s best indie bookshops that are defying Amazon 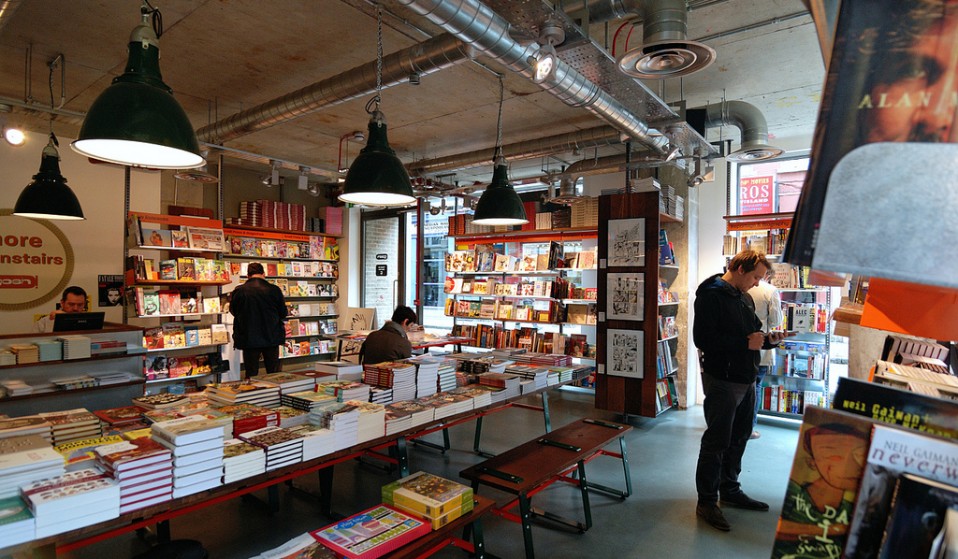 Huck takes a look around the world to find some of the very best independent bookstores.

Inspired by the announced-then-retracted news that Amazon is planning to open 300 to 400 of their own bricks-and-mortar bookshops, Huck takes a look around the world to find some of the very best independent bookstores to have resisted the domination of online retail.

There was a time, long ago in the days of yore, when most street corners would feature an actual bricks-and-mortar bookshop. Stocked with products that could be held, flexed, twisted and thumbed through, it was often the only place such items could be purchased. So the idea of at that point crafting a list of some of the world’s best indie bookshops would appear a seemingly impossible task. But then came the internet, indie bookshops began to rapidly vanish, and writing a listicle of some of the best ones still in existence would sadly get a lot easier.

The new status quo seemed to be set in place – the traditional book store defined as a relic of the past, replaced by gastro pubs, coffee houses and enormous luminous ‘M’ signs. But in a twist few saw coming, the very same internet that drove those bookshops to financial collapse ended up launching a bookshop of their own.

Following the opening of an Amazon Store in Seattle in 2015, an actual bookshop with a curated selection of the site’s top-selling titles, this week saw the vague, potentially-incorrect announcement of an enormous company expansion. With 300 to 400 further physical Amazon bookshops possibly due in the coming years, commentators have been wildly speculating about Amazon’s long-term intentions.

Now indie bookshops face yet another challenge: an enormously well-funded conglomerate rival arriving literally on their own turf. It’s basically You’ve Got Mail all over again.

Don’t despair completely, however. There are still independent bookshops around the world in desperate need of your hard-earned money, providing warmer, friendlier locales for your literature purchases. You’re gonna have to leave your actual house, but it’ll be worth it in the end. Here are some of the best…

All right, if you’re journeying to Paris for the first time, you will undoubtedly head to Shakespeare & Company. But its international renown, while great for business, means it’s generally packed to the gills with tourists perusing the official tote bags and snapping photographs for Instagram. For an earthier, less manic feel, head to San Francisco Book Company a couple of streets over. Founded by American expats in 1997, this store holds a wide range of used and affordable books stacked on top of one other, including a large array of French titles – an unusual mark of distinction in comparison to many of the tourist-friendly book stores in the neighbourhood. 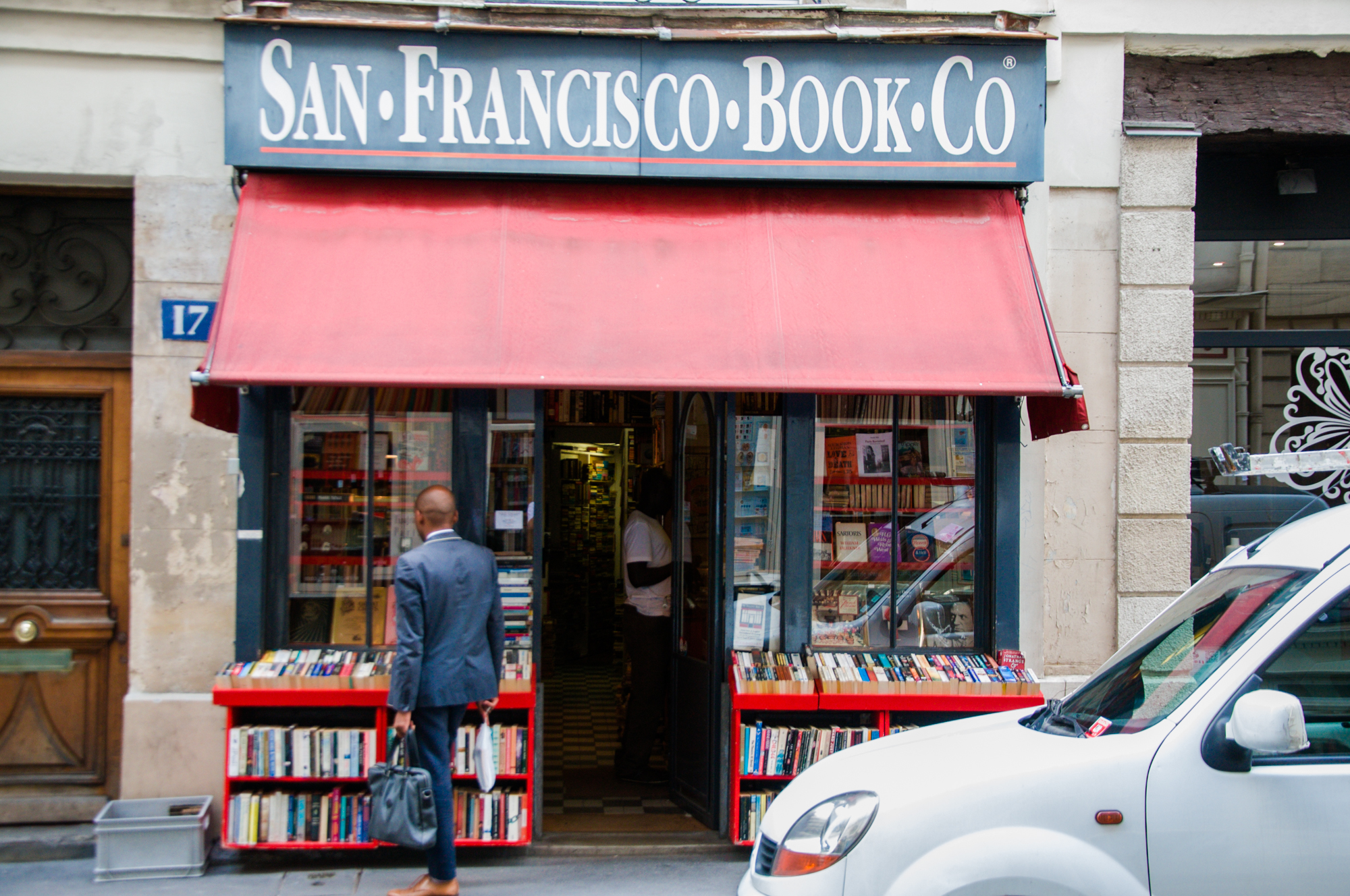 One of the UK’s best secondhand bookshops, stocking an enormous array of used titles and now old vinyl records, Barter Books is housed in a converted train station in a sleepy market town in Northumberland. Its innovative location features a model train and café, while an enormous neon ray of light decorates one of its main walls.

Barter Books is also responsible for the resurgence of the ‘Keep Calm’ meme in popular culture. The shop’s owners discovered an original, long-forgotten WW2 motivational poster buried at the back of a box of old books in 2000 reading ‘Keep Calm and Carry On,’ which was subsequently picked up by various marketing teams and turned into an unavoidable menace to all of society. But let’s not judge them too much. 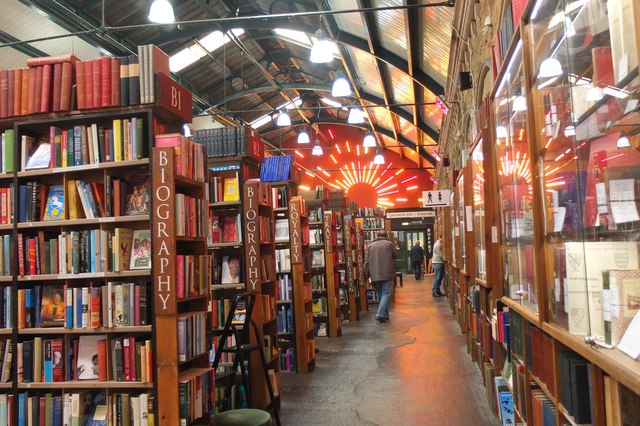 Seite Books was opened in 2010 in a largely Spanish-speaking neighbourhood of East Los Angeles, its founders spotting a gap in the market for a book store in a corner of the city largely ignored by chain stores. As a result, there is a large focus on Latino literature and poetry throughout the store, along with over 20,000 used and new books, and zines by independent artists and writers. They also have an Instagram account comprised of so many cool, colourful book jackets and zine covers that you’d be foolish to not follow it. 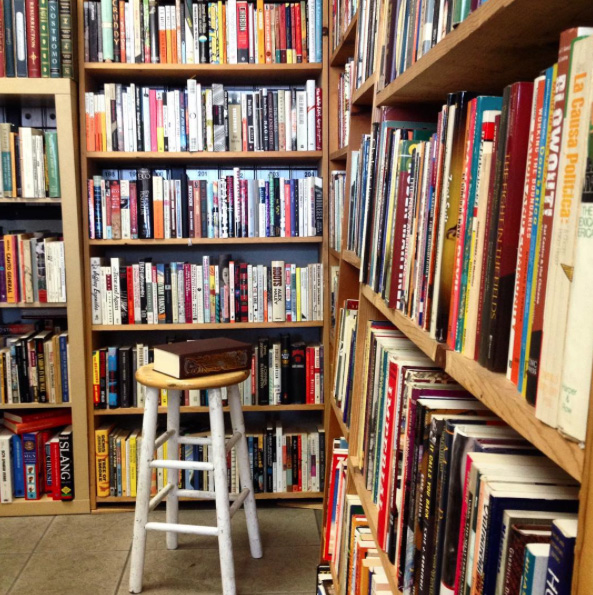 In the mood for pure sleaze? Look no further than San Francisco’s Kayo Books, which specialises in gloriously trashy pulp fiction, exploitation literature and counterculture materials from the 1940s through to the 1970s. Some of the titles to be stocked include Buffy and the Holy Quest (coverline: “He searched the gay world for the perfect mate!”), The Sinful One, Brutal Ecstasy and Wench!

Kayo also prides itself not only on being a used book store, but a museum dedicated to a very specific time in underground culture. As their website reads: “Is that a paperback book in your pocket, or are you just happy to see me?” 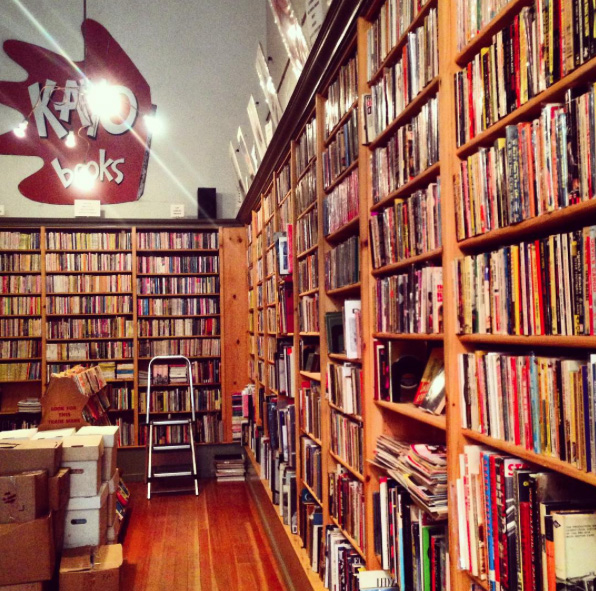 A New York landmark, St. Mark’s Bookshop is the oldest independent bookstore in the city still owned by its original founders, stocked with books on cultural theory, graphic design and the work of small press publishers.

Considering it’s been in existence in the East Village since 1977, it’s no surprise that St. Mark’s is constantly on the verge of collapse. But an interesting story in The Awl this week reports on the store’s “mystery financiers,” who have repeatedly stepped in to pay for the shop’s unpaid rent. The New York Post refers to the “mystery mogul” as a “publicity-shy magnate”, though investigations have revealed it is likely a collective of incredibly wealthy book lovers. Which is surely the type of character description we should all aspire to. 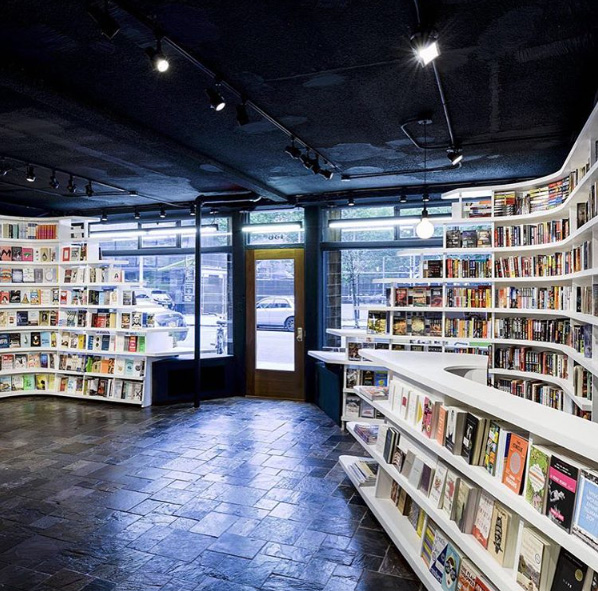 Another Country is very much a throwback to the historical concept of independent bookshops as a mecca for messy geniuses, tortured souls, and drunken fights about literature. Difficult to successfully classify, Another Country operates as a shop, a library and a community centre all at once, watched over by its British expat founder Sophia Raphaeline.

She also takes a very relaxed approach to tidiness, books tossed haphazardly around the space, stacked in crude piles on muddy floors. But it all somehow works, a very old-school literature paradise. Many of the books on offer are from Raphaeline’s own collection, the majority science-fiction and fantasy, and are available on a loan basis. 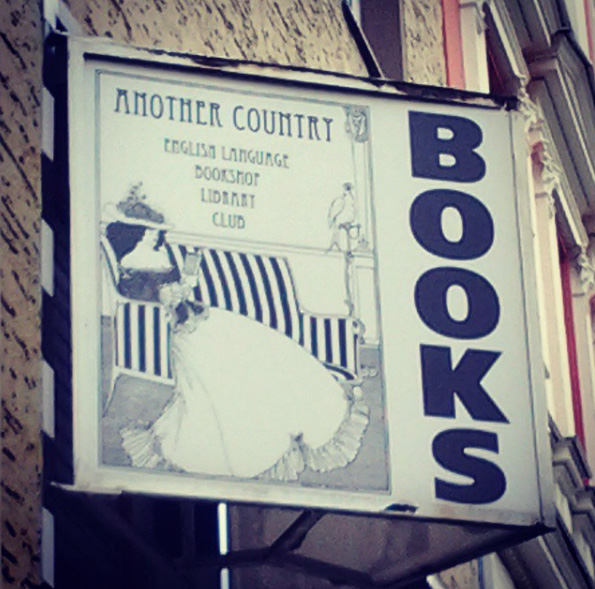 Gosh! has been the capital’s leading indie comic shop for over 25 years, first in their store in Bloomsbury, and since 2011 located in the sprawling cool of London’s Soho. Distributed across two floors, the store has specialised areas for comics new and old, graphic novels and books, as well as an area dedicated to children’s literature, toys and games. It also maintains an enormous focus on small press publishers and indie titles, with an ever-changing display of DIY zines located close to the main till. 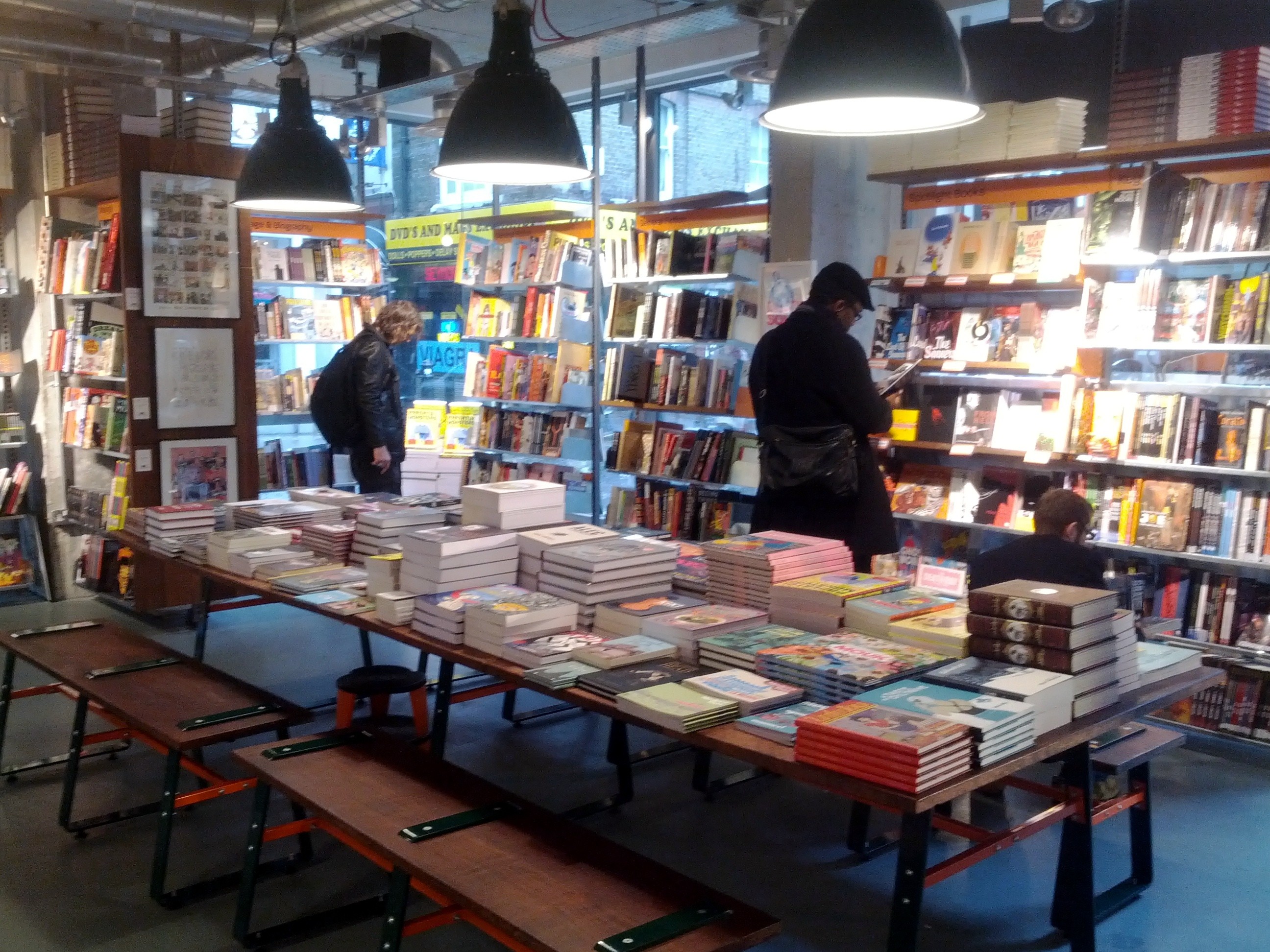 Okay, so The Pavement Bookworm is less a bookstore as it is an actual human being. But the story of South African homeless man Philani Dladli is so moving that it would be a travesty not to talk about him. Living on the streets due to a drug addiction that sent his life spiralling out of control, Dladli began offering books and book reviews in exchange for money on the streets of Johannesburg. “I thought I could be different and actually give people something worthwhile,” he told One in 2015. Now clean, Dladli runs a book club for underprivileged children and uses money from donations to feed other homeless individuals in the city.

He also prices his books on a sliding scale of his own personal opinions, meaning he charges R80 (£3) for Jodi Picoult’s My Sister’s Keeper (which he loved), and R15 (60p) for Clive Cussler’s Devil’s Gate (which he didn’t). 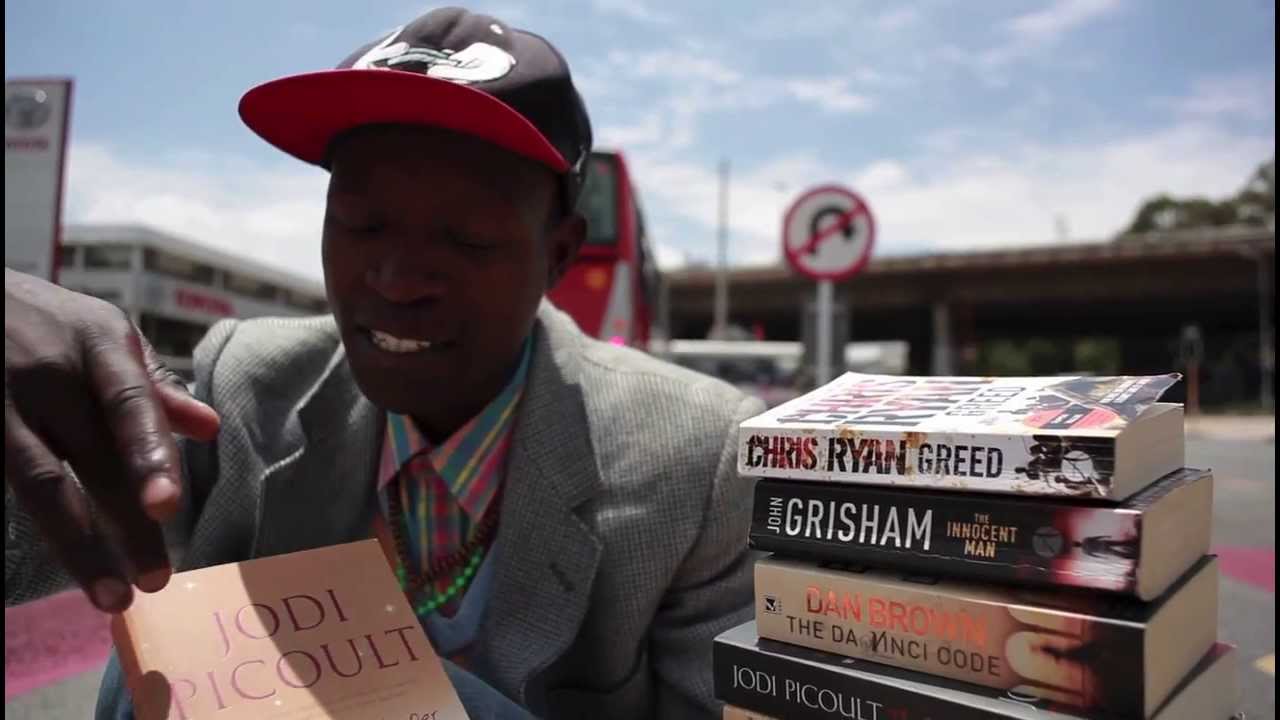 Linkedin
RELATED ARTICLES
OTHER ARTICLES
Dominique Misrahi discusses her unlikely start as a photographer capturing intimate scenes of the city's youth and subcultures.
Demonstrators gathered outside of Parliament to voice their concerns about the monarchy and the crackdown on dissent.
For over a decade, gamblers have won big by employing people to place live bets from the court. But does this dubious method still work?
Photographer David Corio’s archive offers a glimpse inside a revolutionary era of music and nightlife.
The idea that a younger generation is abandoning work has become a popular narrative online, but it doesn’t necessarily reflect reality.
The two-day long event returned to London this year, showcasing a spectacular parade, steel bands and Caribbean food.