Iraq's Dark Phantom lead the charge of heavy metal acts taking on Islamic extremists and corrupt government officials across the region. Here we celebrate some of the loudest voices.

Huck 54 is packed with stories of defiance, like Iraqi heavy metal band Dark Phantom, whose provocative music rallies against government corruption. Constantly forced under the radar by political leaders and Islamic extremists, they are part of a wave of metal acts fighting the power across the the Middle East. Here are some of the loudest voices.

A drifting teenager, frustrated at the world and caught in the crossfire of political corruption and conflict, stumbles on a heavy metal CD and finds his entire life changed. “They were talking about war – like our situation.” Only this isn’t a frustrated American talking, but rather a twenty-something Iraqi musician reminiscing about discovering a whole new world of music via a friend’s Metallica record.

Murad Khalid is guitarist for Dark Phantom, one of the many grassroots heavy metal bands currently active in the Middle East. He spoke to Huck writer Campbell MacDiarmid for Issue 54 – The Defiance Issue. Heavy metal quickly began to dominate his teenage years, ripping pictures of Metallica, Slayer and Megadeth from magazines purchased in nearby Turkey and pasting them to his bedroom walls. Then inspiration struck. “Why not create a metal band here in our city?”

Based in the northern Iraqi city of Kirkuk, Dark Phantom practice and perform in an increasingly dangerous climate. Political leaders, the subject of many of their lyrics, seek to censor them, while they are regularly targeted by Islamic extremists who believe them to be satanists.

While they are sometimes forced to lay low, particularly when they receive death threats on social media, attempts to weaken their passion for the music have failed. “I play when I’m angry,” says bassist Sermet Jalal. “No smoking, no drinking, just metal.” 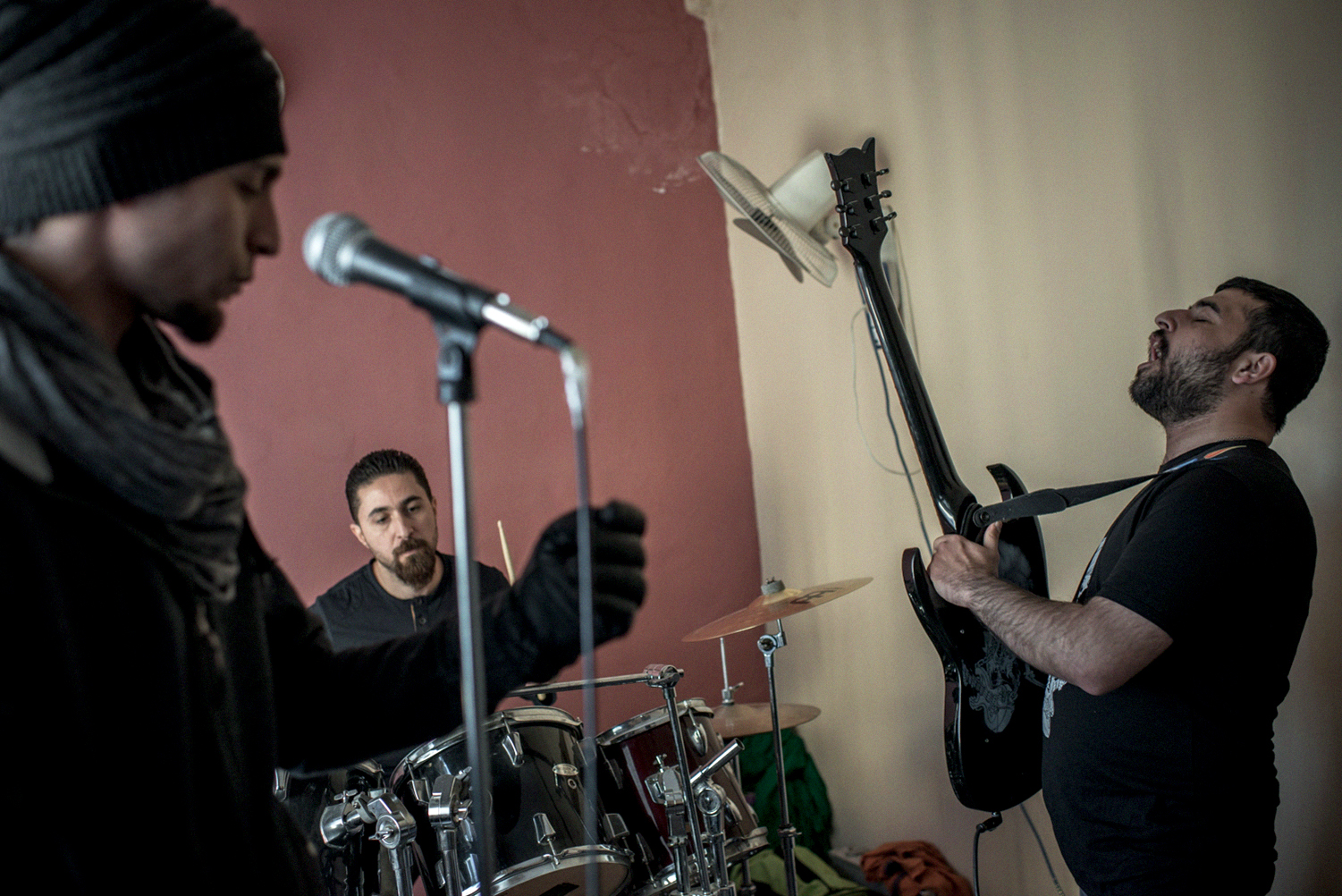 Dark Phantom are just one of the underground heavy metal acts combining music, rage and the sounds of defiance amidst conflict in the Middle East. Go head-bang to these.

The band’s first official music video, Nation of Dogs is lifted from the album of the same name. “Our government is like a nation of dogs,” Murad told us in Issue 54. “They fuck us every day.”

Based in Saudi Arabia, Al-Namrood perform anonymously to protect themselves from state authorities. Their provocative lyrics about religion and political corruption leave them vulnerable to arrest and potential execution.

The main subject of the must-see 2007 documentary Heavy Metal in Baghdad, Acrassicauda were forced to flee Baghdad following repeated attacks from extremists. They were later granted asylum in the USA, and are now based in New Jersey.

The original Israeli heavy metal masters, Orphaned Land have been condemning the Israeli-Palestinian conflict throughout their career, often courting controversy for refusing to hold one country’s interests over the other.

Read the full article on Dark Phantom in Huck Issue 54 – The Defiance Issue. Grab a copy in the Huck Shop or subscribe today to make sure you don’t miss another issue.

Linkedin
RELATED ARTICLES
OTHER ARTICLES
Wealth inequality and the rising cost of socialising is placing a strain on people’s relationships, reports Eve Upton-Clark.
Proposals to introduce a minimum GCSE threshold for student loans will disproportionately affect those from marginalised backgrounds.
Yesterday queer activist group Lesbians and Gays support the Migrants staged a die-in at the Pride in London parade to protest the inclusion of police in the march reports Huck politics editor Ben Smoke.
Thomas Hoepker‘s images taken during a road trip across America provide a searing social commentary about a divided country.
Photographer Matthew Brookes recalls following a group of young people in Venice Beach living in search of the perfect wave.
In the wake of the decision by the supreme court to overturn Roe v Wade, thousands of protestors filled the streets to express their rage and anguish.