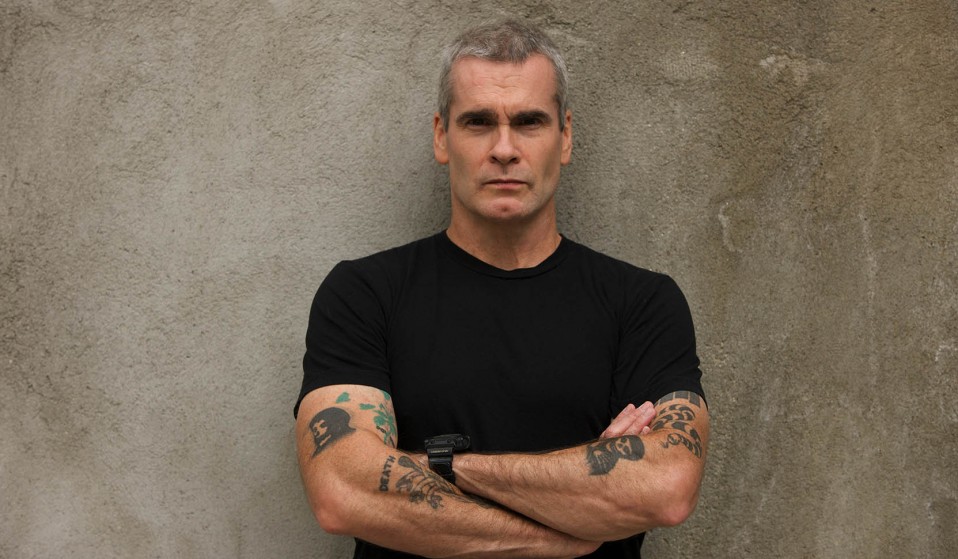 Henry Rollins eludes any simple categorisation. The term people most often reach for is ‘renaissance man’ …but that just sounds entirely at odds with his character – not that he’d care. Rollins is only interested in working, learning and not sitting still. The one thread running through his career is being plugged into something worthwhile, something engaging.

Since fronting the definitive L.A. hardcore band Black Flag in the 1980s, Rollins has been an author, actor, radio host, travel journalist, photographer, TV presenter, publisher, label owner and campaigner. But for years now Rollins has also been touring the world with a spoken word show that combines stand-up comedy and incisive analysis of current affairs.

For Huck 54, writer Steven T. Hanley caught up with Rollins to discuss creativity, politics and his restless work ethic. The Defiance Issue is all about celebrating voices of rebellion – people who defy conventions and squeeze the most of out of life. Henry Rollins fits that description perfectly. Here’s a taste of what he had to say.

“It’s like porn; it’s completely gratuitous. ‘You [the audience] all like these songs – we are going to play them for you and we are going to get paid.’ I finished the last [Rollins Band] show [in 1996] – which was conveniently in Los Angeles, where I live – put on a different pair of sweatpants, and without even saying goodbye to the band I left the dressing room, snuck out to the parking lot and drove home. I’ve only seen one of those guys since. I don’t hate them. Quite the opposite… I feel I sort of sold out by doing that tour because it’s exactly what I don’t want to do: relive the past.”

2. A lot can be learned from visiting war zones

“I’m not really concerned about when I die. Put it this way, I’d leave for Kabul today if I didn’t have to leave for New York tomorrow. If I could survive six weeks in Kabul without getting my head cut off or kidnapped, I’d definitely go back. Even if there’s a risk of that, I might go back anyway. I’m more interested in seeing and learning than having a long life so when someone says, ‘Hey, you’re going into a high-threat condition environment, are you sure you want to do that?’ I’m like, ‘YEAH!’

“Black Flag would be extraordinarily political because we had so much police pressure and local politics operatives would come to our shows and do press conferences about how we were evil and all that, so it made me quite cynical about my government, who seem to hate me and not want me to exist. And so I pushed back; as hard as they laid it on me, I tried to lay it back on them. The cops would hassle us and we would go to the press and hassle them back as best we could. Of course when you’re feuding with the government, the government is going to win. So I’ve been politically aware on different levels since I was a very young person.”

4. Work is an effective (and productive) coping mechanism

“I medicate with work. I constantly drink coffee and music kind of takes you out of yourself, you know? Let’s just put on this record and not want to break something. The idea of going on vacation – I just don’t understand that. Like, go sit on a beach? Am I that dead?”

5. US corporations kill more than terrorists do

“We’re Darth Vader. We’re the Death Star. We will kill you all. We are worse than ISIS and Al Qaeda. Corporations kill more than any other terrorists do and we’re the biggest gang on the block and eventually we’ll toxify the whole planet and everything will die. I meet wonderful people in the county all the time but I don’t know about what ‘WE’ do in our country’s name.”

Check out the full article in Huck 54 – The Defiance Issue. Order a copy in the Huck Shop  or subscribe today to make sure you don’t miss another issue.

Linkedin
RELATED ARTICLES
OTHER ARTICLES
Last week, Tower Hamlets council removed its nudity-restricting licensing conditions in a huge win for London’s kink community.
A new series of photos by Johny Pitts shines a light on communities and subcultures that have all too often been overlooked.
With the virus now a global health emergency, we must take steps to fight misinformation and demand a swift UK-wide vaccine roll out, writes Phil Samba.
In the latest instalment of Photographers in Conversation, the creator talks portraiture, platforms and taking inspiration from Little Simz.
Following the release of his latest album, the rapper talks about finding a new approach to songwriting, attitudes to poverty, and why his music is more than a political statement.
From the chip shops, to the bingo parlors and burlesque dancers, photographer Mike Coles remembers capturing scenes of holidaymakers by the English coast.