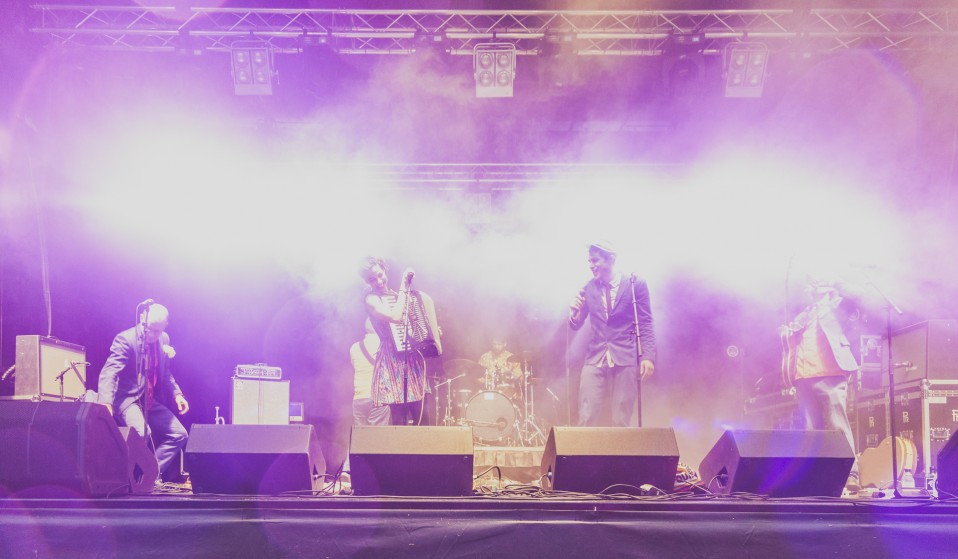 If our Reykjavik city guide got you aching to fly north, make sure you plan your trip to hit the awesome Secret Solstice Festival in June 2015.

If our Reykjavik city guide got you aching to fly north, make sure you plan your trip to hit the awesome Secret Solstice Festival in June 2015.

In Huck 49 – The Survival Issue, we showed you round Iceland’s booming creative and tourist hub, capital city Reykjavik.

We highlighted key figures from the worlds of publishing, fashion and politics, but did you know that over the weekend of June 19-21, there’s a festival where the sun doesn’t fully set for 72 hours?

Secret Solstice kicks off this year for the second time in Laurgardalur (translation: Hot Springs Valley) and the line-up’s even hotter than those hot springs.

So, while you’re dreaming of how borderline insane three days without darkness might drive you, chill out and just listen to who you could be seeing in the world’s northern-most capital.

Karen Marie Ørsted, or MØ for short, has been doing the rounds for a while now. While not being the most original artist to emerge in recent memory, she’s built a strong relationship with American DJ Diplo who produced her breakout single ‘Waste of Time’ and featured on Major Lazer and DJ Snake’s latest single ‘Lean On’ which is a masive tune.

Charles Bradley and His Extraordinaires

Arguably the world’s pre-eminent James Brown imitator, Bradley used to perform under the stage name of ‘Black Velvet’ around Brooklyn clubs doing tributes of Brown as recently as NYE 2012 after being inspired by The Godfather of Soul. His story isn’t one of a rapidly rising star, though. Bradley worked odd jobs and played tiny venues until his beautifully soulful voiced was finally picked up by Daptone Records.

Mugison offers a bit of respite from the techno and house influences on show at Secret Solstice. His exceptional combination of blues rock and a properly gruff voice is something just a little different. His father, Muggi, was a karaoke singer in Malaysia and, when visiting him once, little Örn Elías Guðmundsson’s name proved too tricky for locals to pronounce. Thus, Örn, son of Muggi, became Mugison. Simple and effective.

If you’re looking to take your foot off the gas a little and kick back, these guys are gonna be the ones to provide the backing track to your chill out session. Hjálmar offer a really amazing mix of laid back reggae and Icelandic lyrics so, if you don’t speak the native tongue, you can just nod your head on the off-beat to the music. If you do, however, speak fluent Icelandic and love reggae then you’ll have an absolutely great time.

Is it possible for 16,222,668 views, at the time of writing, to be wrong? There’s always a margin for error but it seems like a safe bet from where I’m sat. Hugo Gruzman and Jimmy Lyell have producing some great tracks for the last six years but their most recent LP, Down to Earth (2014), only peaked at #3 on the Australian charts.

Picking the mood back up with some high quality funk and soul samples, Moodymann’s been going for as long as I’ve been on the planet. It’s fun, upbeat and it’s a good job the sun won’t set because that’d really put a bummer on his sunshine-soaked tracks.

In no way does this sound like the kind of music to make its way out of Leeds in the north of England. George Evelyn has been putting out material since the early ‘90s combining funk, soul, acid house and hip hop into his own unique blend. If you’ve never seen this guy live, do not miss it. Like, not even a little bit.

The description on their Secret Solstice page simply reads, “Come and see!”, which doesn’t offer much in the way of a back story but the Reykjavik band are huge in their home country. They’ve consistently scored number one singles so if you want to see one of Iceland’s best kept secrets then follow the festival’s advice.

Two full decades of genre-defying music and the opening credit song for one TV’s most acclaimed shows, The Sopranos, isn’t a bad track record to have. Coming out mid-90s Brixton, Alabama 3’s effect on the south London music scene has been enormous. Every member of the group has an alias and I’m offering ten points to the first person to reel of all of them without googling it first.

Closing this list of the most eagerly anticipated acts of Summer Solstice 2015 are Samaris, an electronic act who won Iceland’s annual Músíktilraunir prize in 2011, the year after Of Monsters And Men won the same award. The trio formed in Reykjavik earlier that year and have been steadily rising by playing at a number of festivals last year although Secret Solstice is the only festival they’re booked to play so far this year.

Linkedin
RELATED ARTICLES
OTHER ARTICLES
In Sheffield, food delivery drivers are fighting back against one of the giants of the gig economy.
Photographer Melanie Nissen recalls capturing the characters, fashions and rarefied chaos of a rapidly-expanding set of punk bands who helped to redefine the genre.
Photographer Alice Mann reflects on capturing the camaraderie and discipline it takes to succeed in a highly-competitive sport.
From the queues outside to the last ones standing, Francesco Mellina’s new photo book follows a night that has gone down in the Northern-Soul history books.
Photographer Yan Morvan revisits a radical moment in history, which saw the emergence of a fiercely-rebellious spirit among the UK‘s youth.
Those set to be impacted by the governments ’undemocratic’ bill explain why it risks silencing them.