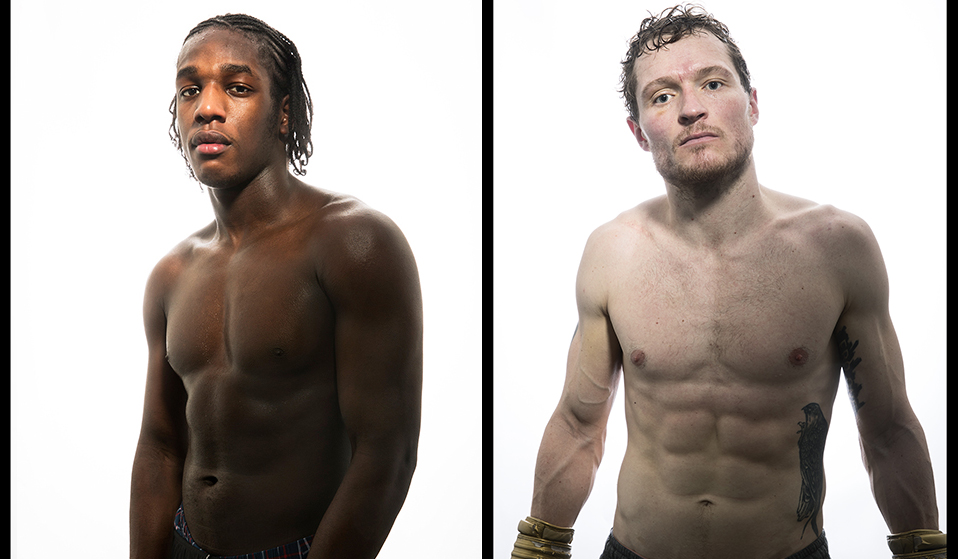 For over 40 years, a no-nonsense boxing club in North London has been a hub of rebirth and redemption. But step back from the success stories and a different picture emerges: one giant family fighting for survival.

In an old North London gym, sandwiched between Crouch End and Finsbury Park, a group of 30 boxers are receiving a bollocking.

As the guilty parties look around sheepishly, a sharp whistle signals the start of training. Shoes squeak across the tiled floor. Skipping ropes get whipped into a frenzied whoosh. Sparring partners erupt in laughter, yelps and shouts. 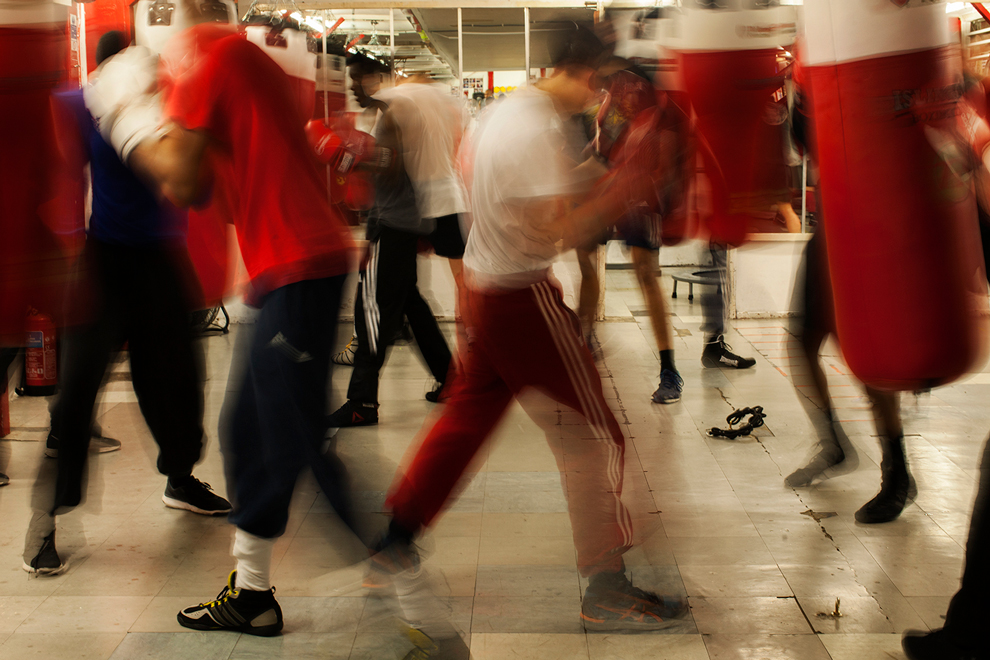 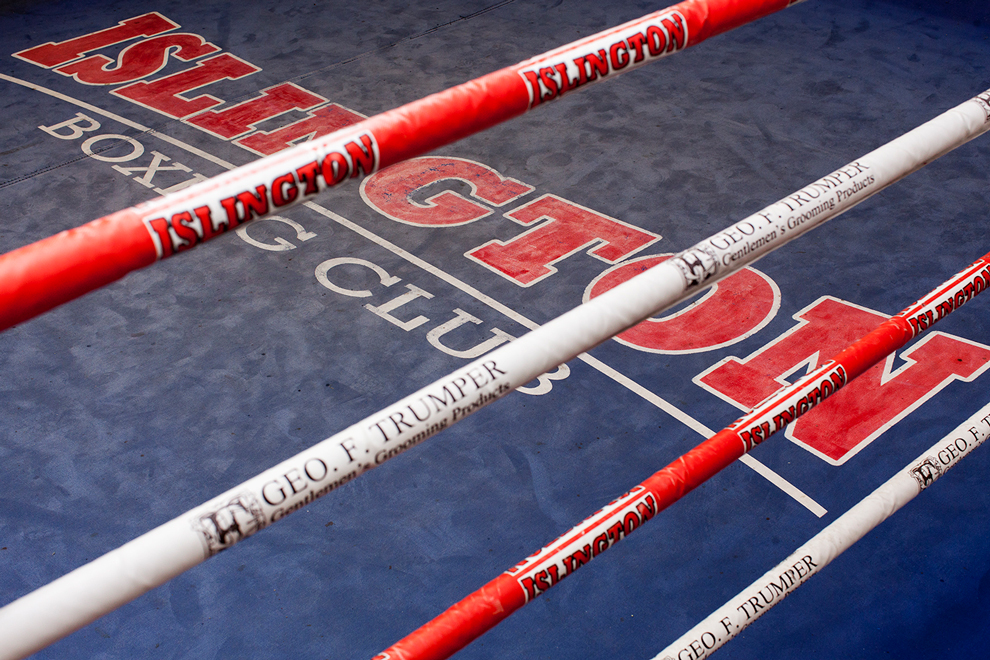 Beneath it all is the steady rhythm of punches being thrown: glove hitting bag, glove hitting pad, glove hitting body, glove hitting face. It’s the sensory equivalent of standing in the middle of a busy airport runway, only much sweatier. “We don’t play boxing,” Jerry repeats, prowling up and down the room with a glint in his eye and a barely contained grin. It’s going to be a good night.

Launched in 1974, Islington Boxing Club (IBC) is one of the busiest in the country, opening its bright red gym seven days a week. It now caters for around 600 recreational members and 800 competitive. “And that’s not including our infant section,” adds club chairman Lenny Hagland, chuckling.

The club has been in the Hagland family since it was first established over 40 years ago. Lenny’s father, Ron, became one of the founders after responding to an advert in the Islington Gazette, where a group of men starting a boxing club in King’s Cross sought help setting it up. 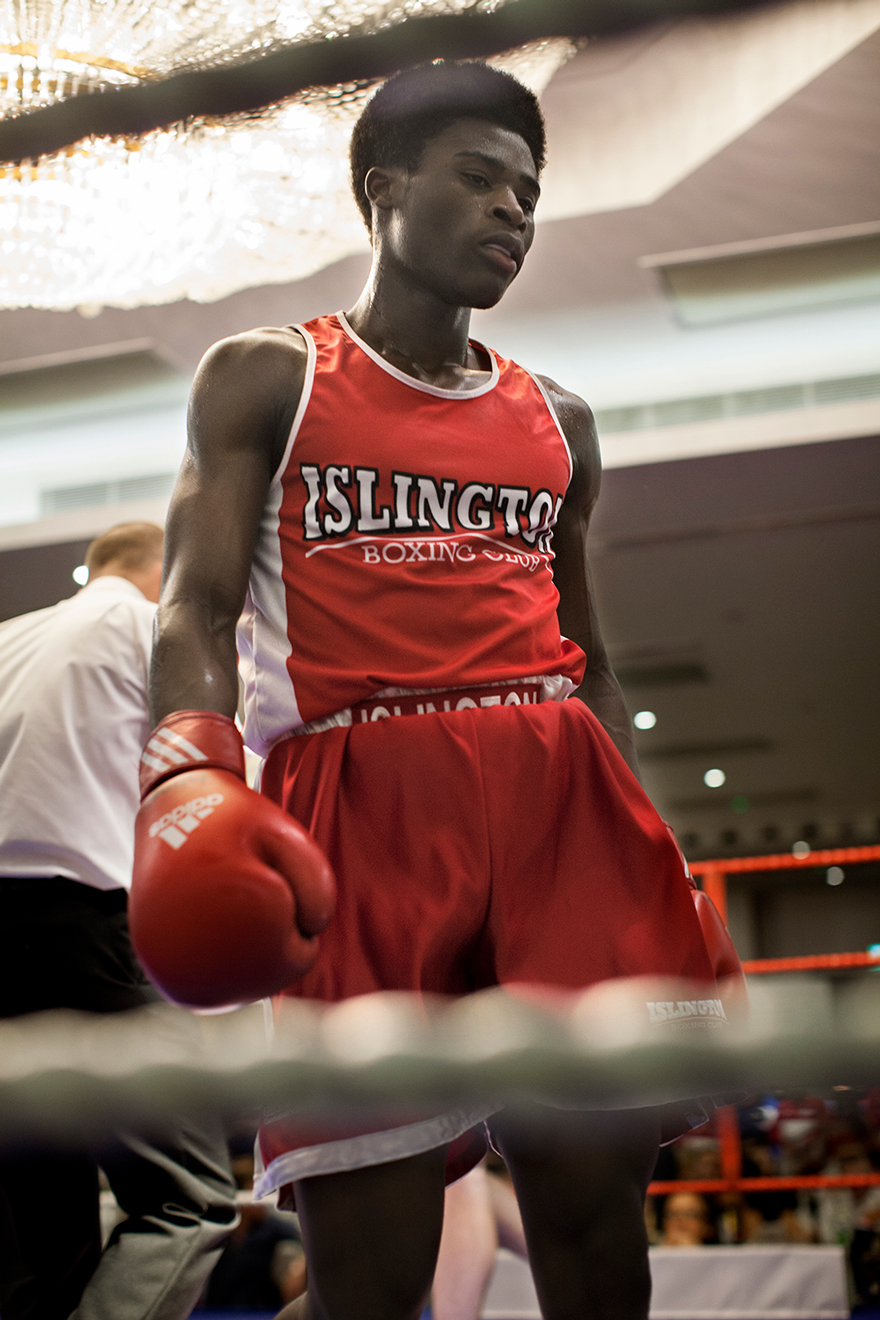 19-year-old Azeem Bakar has been training for a year.

For Ron, the opportunity arrived at a pivotal moment: his five-year-old daughter had recently been killed in an accident at the transport yard he owned.

“My dad needed something to take his mind off that,” Lenny explains, leaning back in a chair in the centre of an endearingly cluttered office. “Dad had a lot of regrets about what happened, obviously. Could he have done this? Could he have done that? He needed to get out. That’s what boxing gave him. It gave him a different life – and he took it on.”

The journey that followed took IBC to several locations across the city before eventually settling here in 1981. When the club’s founding committee began to drop off in the 1990s, Ron asked his son to come on board and help with coaching. In March, not long after this story had been completed, ‘Big Ron’ passed away at the age of 86 – having left the club in secure hands. 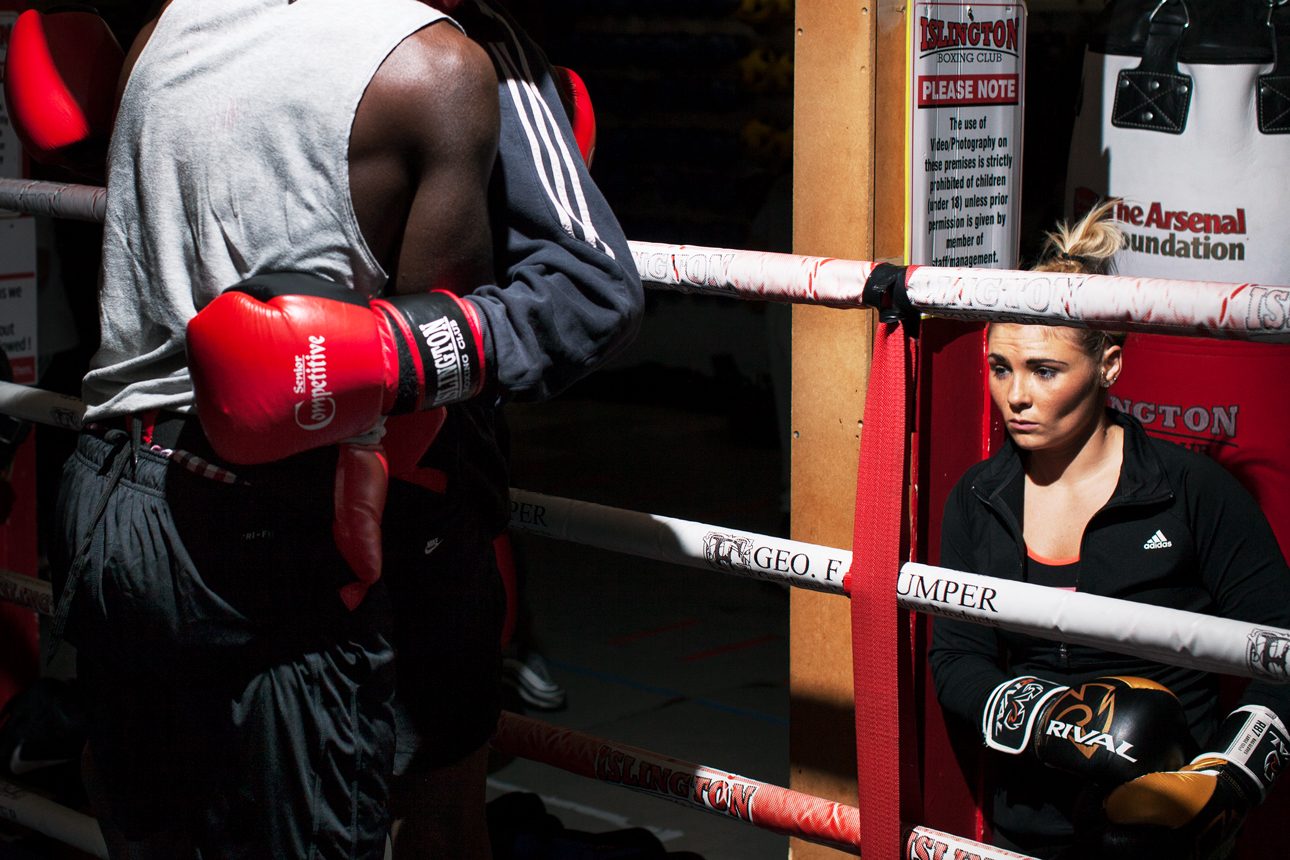 Shannon Courtney stands outside the ring, awaiting a session of her own. 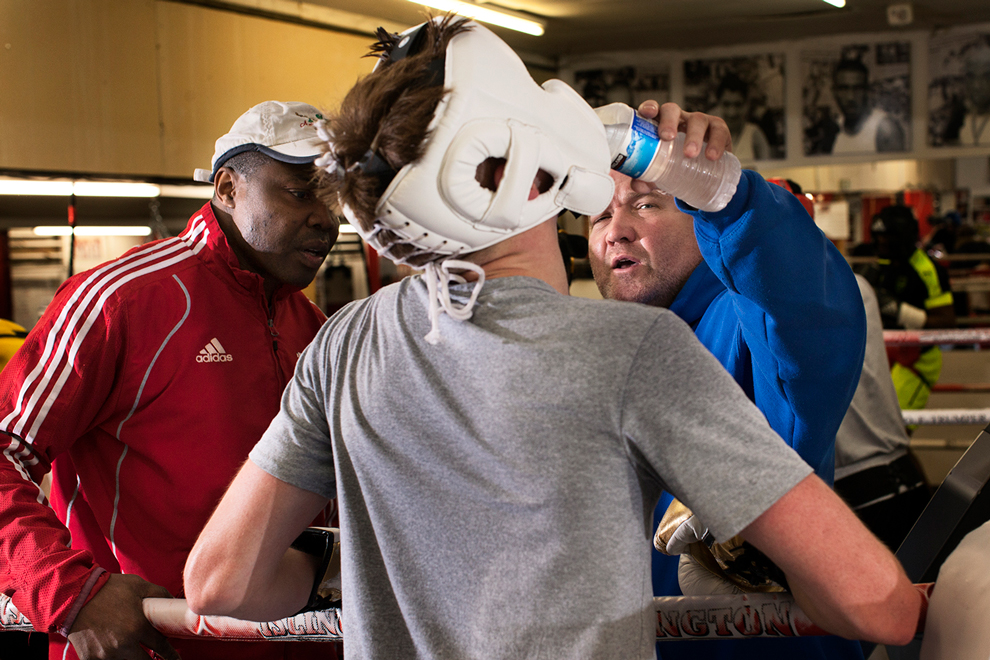 Today its running falls to 53-year-old Lenny and his own son, Reggie. While the former is far more reserved and considered with his words, the 26-year-old is all quips and jokes, zipping around the gym’s two rings as the training session roars on, greeting everyone by their first name. One day, this’ll all be his.

The Haglands are an old-school bunch and the gym’s interior reflects as much. Vintage fight posters and newspaper cuttings decorate the walls alongside paintings and sketches depicting greats like Ali, Tyson and Lewis.

Stare closely enough at one particular poster and you’ll notice a photo of a handsome young boxer named Roy Callahan on the undercard. A professional of 18 bouts back in the ’80s, the 55-year-old is now another senior coach at IBC, the calm and collected straight-talker to Jerry’s seasoned performer. 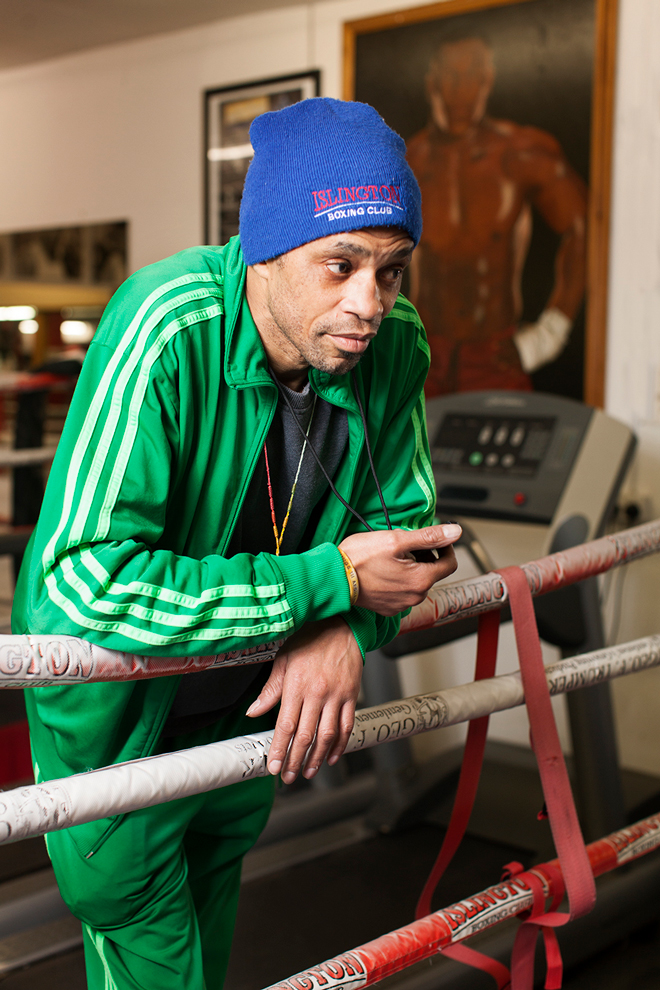 “I got into boxing at nine years of age because I was getting in trouble in the streets,” he says, taking a break with a glass of water in the club’s kitchen. “Boxing gives a lot of kids an opportunity. They’re not all going to be world champions and make loads of money, but they get the opportunity to gain confidence, learn new traits and grow.”

Roy – who’s sharp, engaging and sports a grey buzzcut – grew up in a family of boxers from the area. Even though he moved to Colchester years ago, he still commutes – intent on giving back to the community that shaped him. “A lot of these kids don’t have the secure homes that others do. It’s hard. We’re here to help them out. They’re looked after. Without this club, these kids would be out on the street.”

Someone who knows that better than most is Cherelle Brown. When she first set foot in the IBC gym six years ago, Lenny explains, she was homeless and running with gangs. But despite never boxing before, she was welcomed immediately. “Fighting and boxing are two very different things,” she says now, laughing. “I found that out within moments of stepping in the ring. I got beaten up for about nine months.” 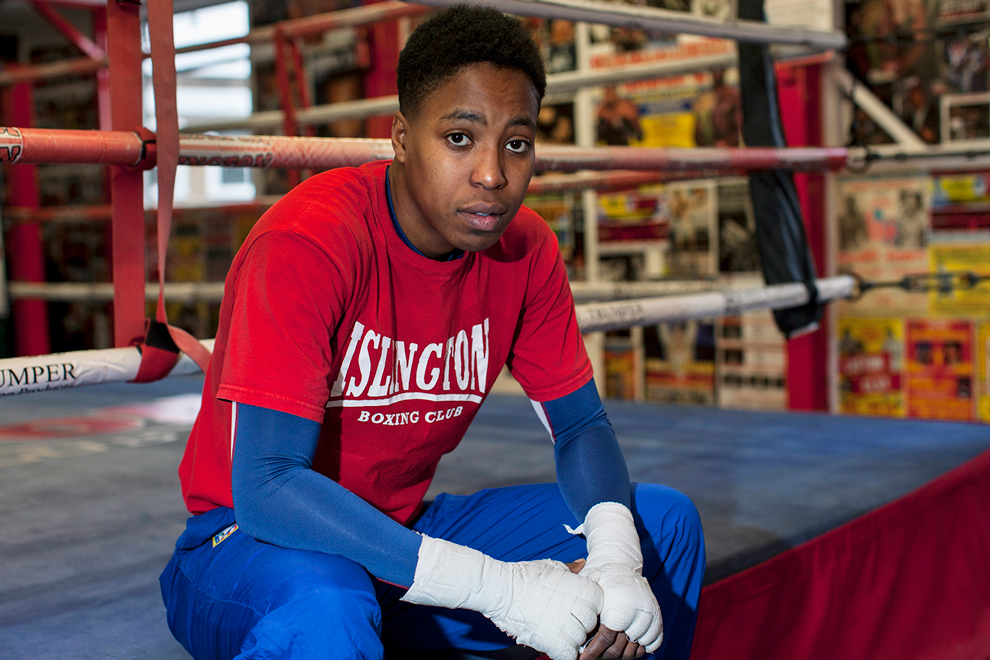 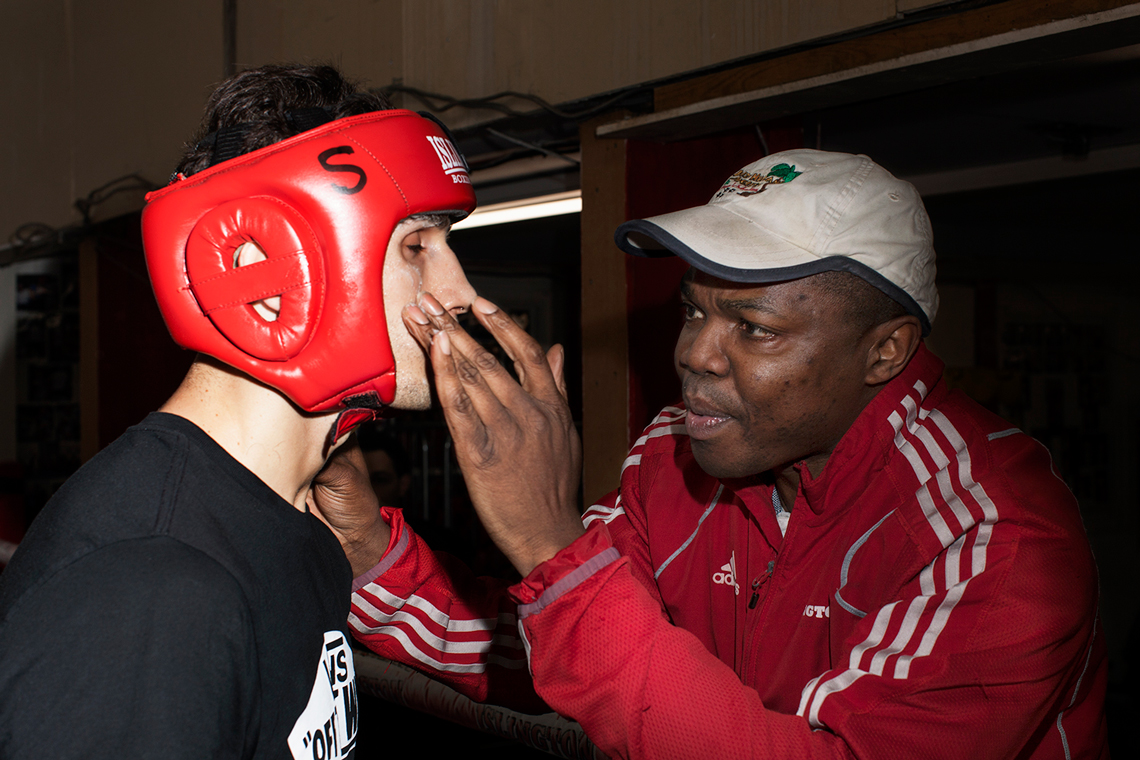 Eventually, everything clicked. She’s now one of the club’s star names, as well as a coach and personal trainer with over five years experience. She’s also applying to study osteopathy at university and, next month, will finally turn pro after an amateur career of 36 bouts. For Cherelle, boxing allowed her to face up to her own demons. “It was just being in a positive environment,” she says, “one where I could actually see a good outcome for my life as opposed to a negative one.”

Stories like Cherelle’s are the ones that matter the most to Lenny – and one of the reasons the club means so much to so many. The transformative power of the sport is something he swears by. But last summer, the club discovered that one of their boxers, an 18-year-old named Mahad Ali, had been stabbed to death after being set upon by a gang of masked attackers.

“He was a lovely kid – a decent boxer who kept out of trouble,” says Lenny. “But he came to that age where he had to stop boxing to concentrate on college. At that point, we didn’t see him at the gym for about a year… Whether he got in with the crowd, I don’t know…” His voice trails off for a moment. 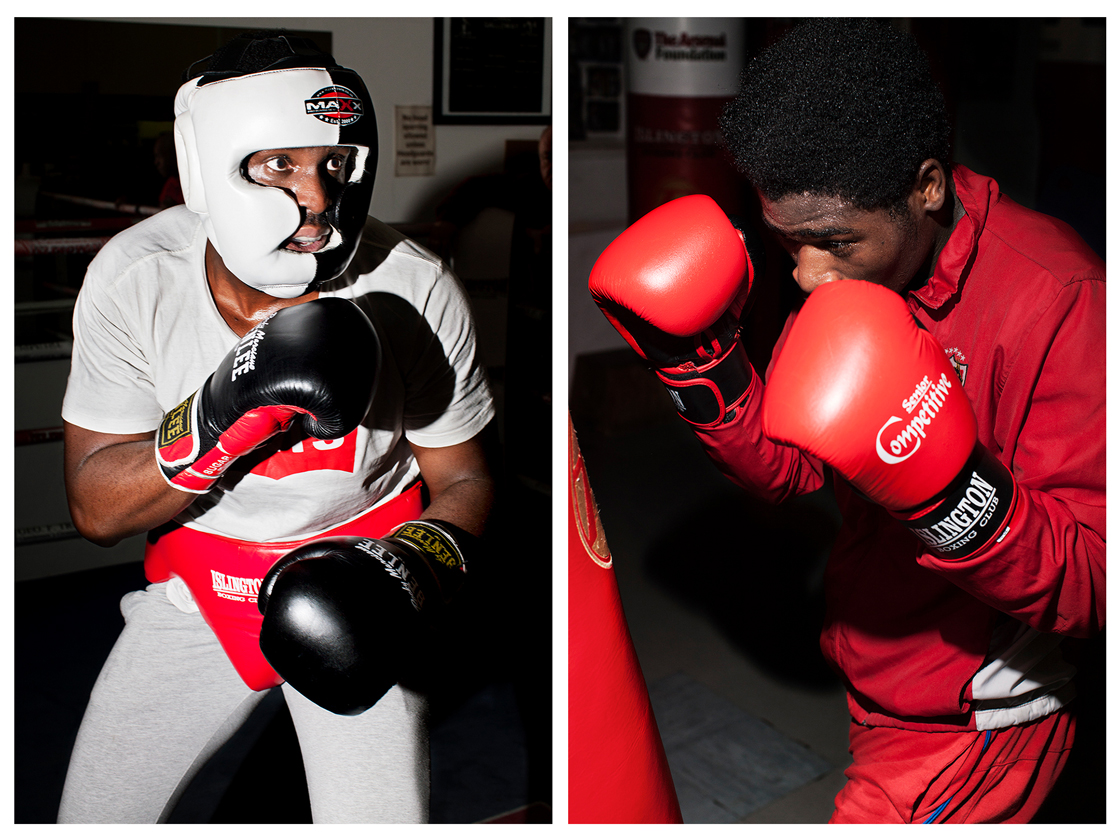 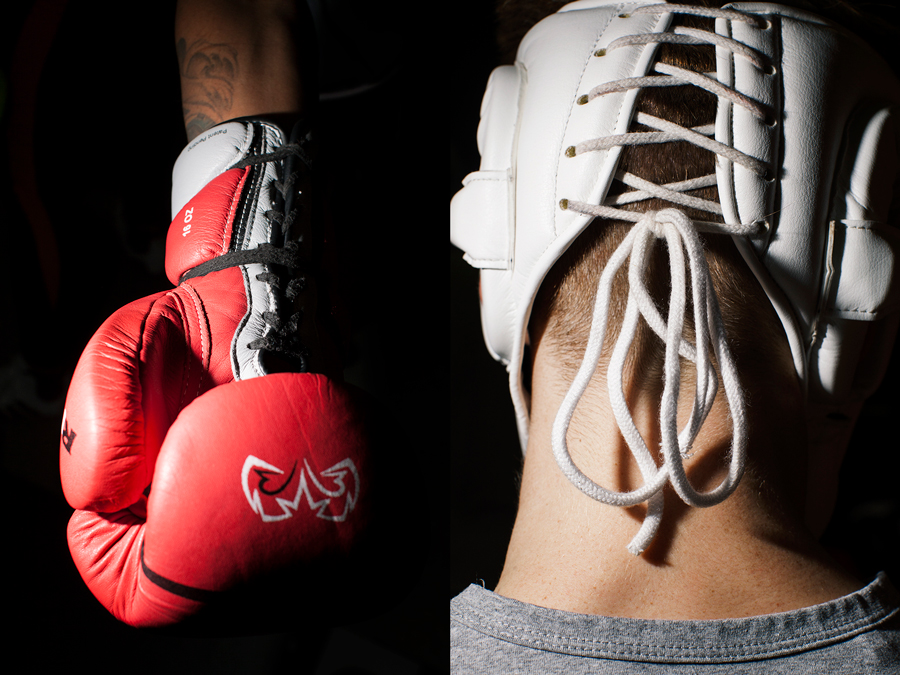 “One of our ex-boxers came in last week. I found out that he had been stabbed too, about three months ago. Luckily, it was in his arse, in his legs, but he’d been stabbed about five times. He said, ‘Len, I’ve got to get back to boxing. Since I’ve been out of it, I’m getting in all sorts of trouble.’ See, we can only show them a certain way. When they’re at boxing, it keeps them away. But when they go out of it, I can’t do nothing.”

While the club caters for all ages, most of its members are local kids. Two of those, 19-year-old Azeem Bakare and 18-year-old Eli Musah, have been coming for about a year.

Eli, a trainee estate agent with a hulking frame and a shiny set of braces, used to come home from work only to end up hanging around the streets in search of something to do. That was always a potential pathway to trouble, he admits, “but boxing takes my time in a positive way.” 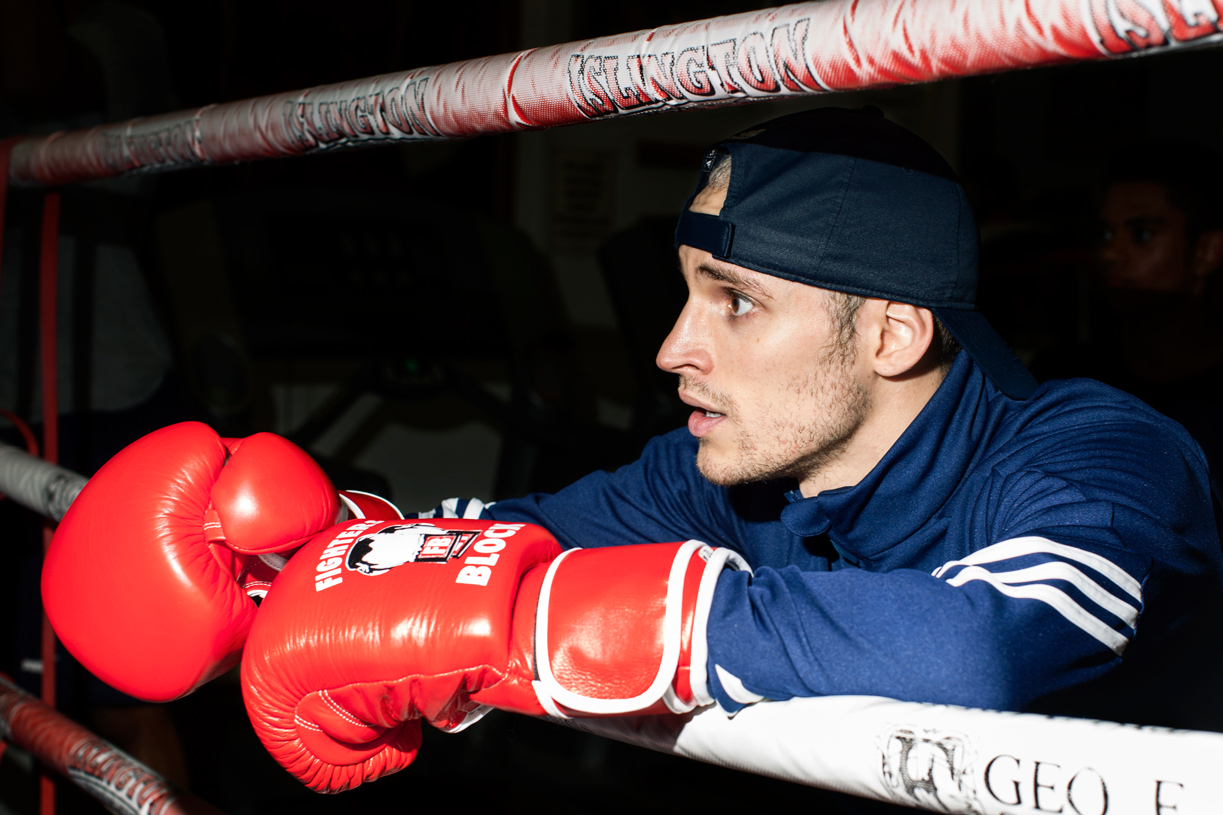 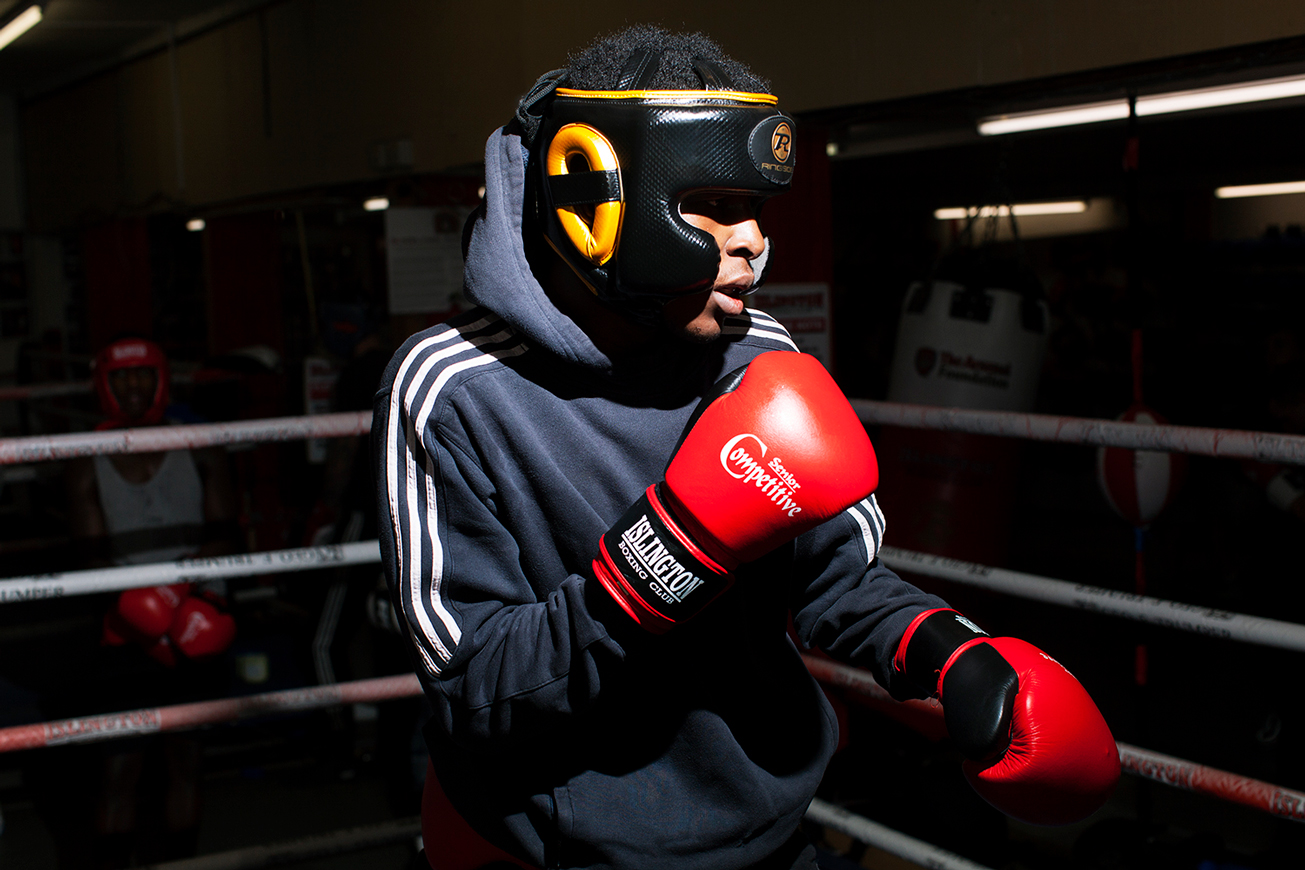 Azeem – who bears a striking resemblance to a young Muhammad Ali and talks just as fast – nods in agreement. “It’s something I look forward to,” he says. “Even when I’m not here, I go running just to get ready for it. It gives you discipline. You   have to keep calm and think about what you’re going to do.”

For Scott Smart, a 25-year-old bantamweight, boxing was always about escapism. As a kid, he and his twin brother Troy would wake up at the crack of dawn on Saturday morning and watch the fights their father had taped for them the night before. “He had this tiny little TV in his room. We would sit on the edge of the bed while my mum and my dad slept, just watching boxing. That was our routine every single weekend.”

After joining the club as an 18-year-old along with his brother, Scott now trains six days a week and hopes to represent England one day. “It’s a cliché,” he says, grinning. “But it really is a family here, man.” 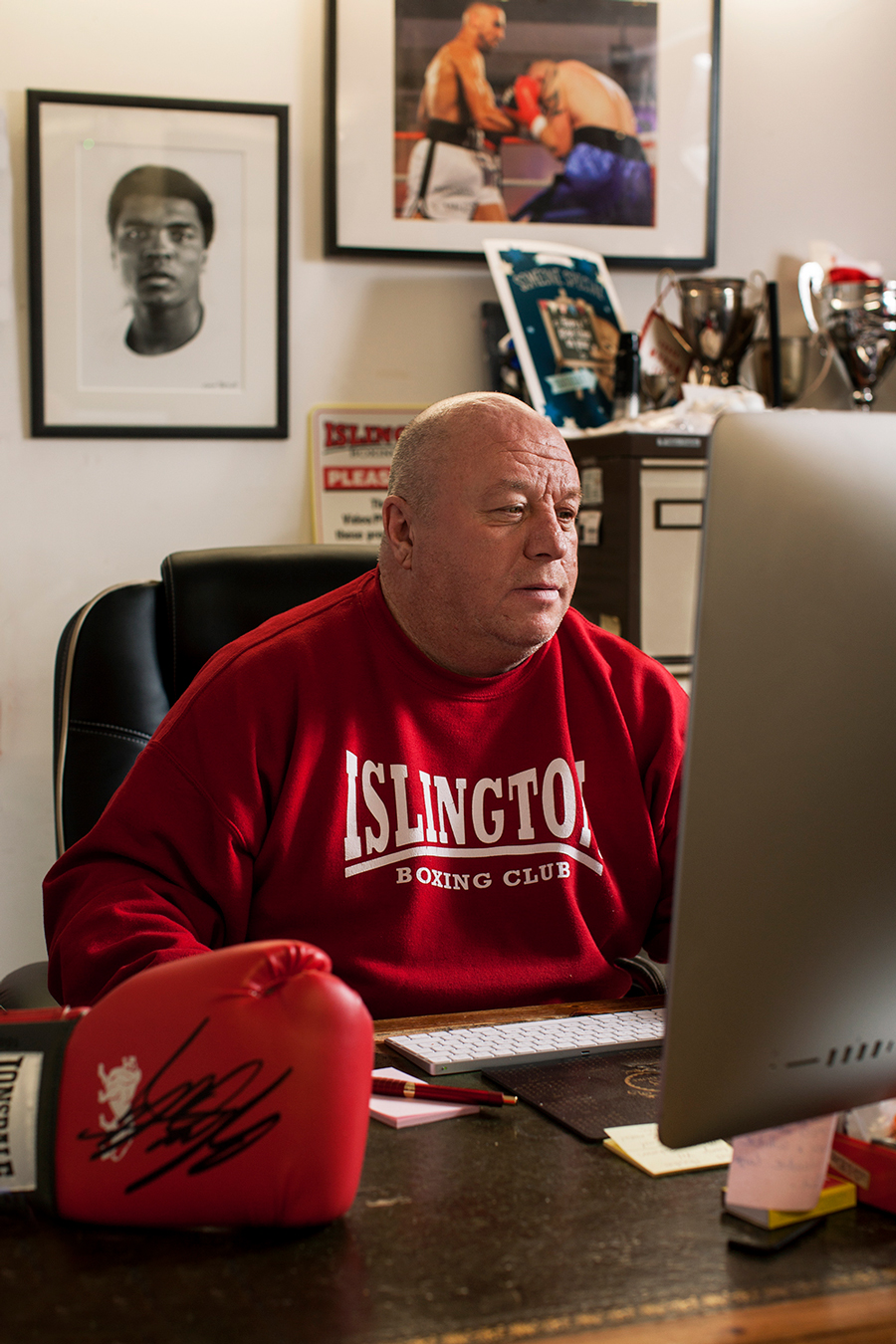 Lenny, sitting in his office.

That word pops up continually in the gym. While Lenny, ever modest, is reluctant to take any credit (“It’s the same in boxing clubs up and down the country”), there is something unique about the camaraderie here.

Members past and present still visit Ron at his home in Essex. And whenever Lenny is with his dad, the club is all they talk about. “It’s never, ‘How are the kids?’” he says, shaking his head. The club has just agreed a 99-year lease with the local council, securing their long-term future. The next step is to begin expanding the space so that it can accommodate events and educational facilities – extra support, essentially, for locals who might need it. 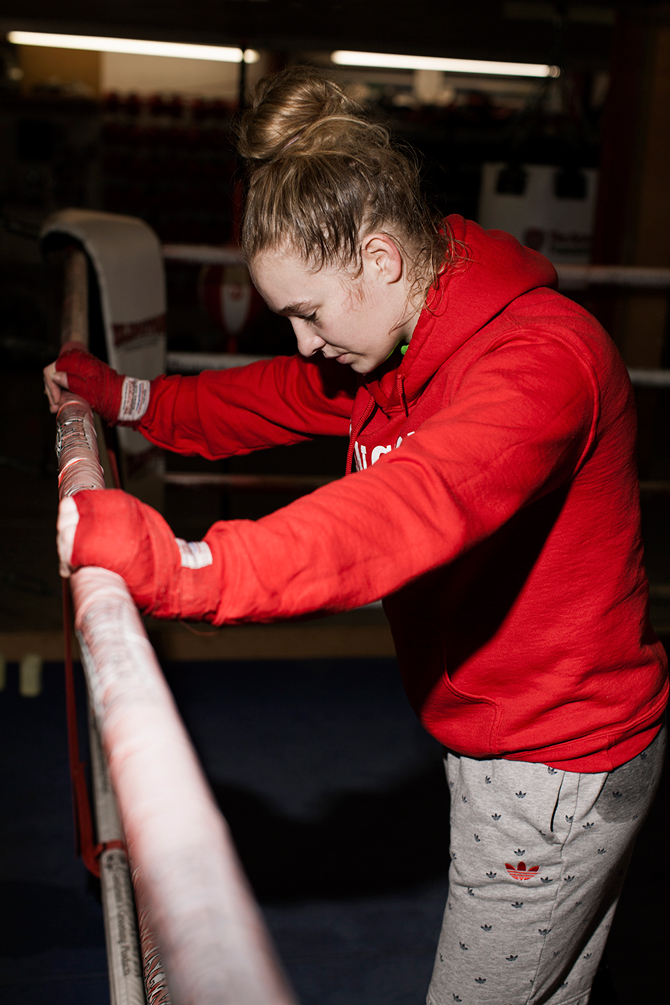 As training comes to a close and the boxers begin to filter out, Lenny stands among his fellow coaches on the empty gym floor.

“For me, it’s a bit like having 1,000 children,” he says, glancing up at the pictures along the walls.

“In a few years’ time, these kids you see here, they’ll have kids themselves – and they’ll be coming to visit me. It really is part of the community now. It makes such a difference to everyone ’round here.”

Linkedin
RELATED ARTICLES
OTHER ARTICLES
A new edition of a seminal book brings together iconic images of the band onstage in their full glory and backstage in moments of unguarded camaraderie.
With inflation now at a 40-year-high of 9 per cent, demonstrations organised by TUC took place to demand action from the government.
On the fifth anniversary of the tower fire, around 18,000 joined the walk to remember the 72 dead and to demand justice.
In her new book, the author explores the country’s housing crisis in human terms and calls for radical action to address a broken system.
Photographer Matthew Brookes recalls following a group of young people in Venice Beach living in search of the perfect wave.
The past five years have seen a staggering increase in foodbank usage across the UK. Now, staff fear things are set to get much worse.