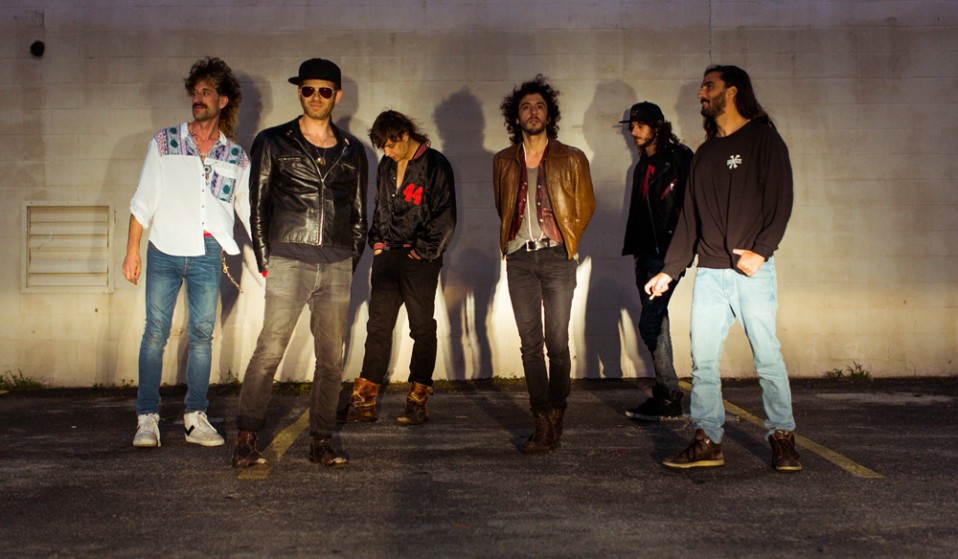 Julian Casablancas has long been considered one of the great songwriters of his generation. As frontman of The Strokes, he crooned his way through punchy power-rock that became an anthem for the early naughties and defined a new aesthetic for urbanites looking to New York City for their lead in a post-9/11 world. Being appreciated in his own lifetime has never been a problem for Casablancas, who’s rock star status is reflected in the fan sites and followers who track his every move, but that hasn’t stopped him from pushing boundaries – and then checking in to see who sticks with him for the ride.

His new band Julian Casablancas + The Voidz ditches The Strokes’ easy access point of lo fi, bar-crawl cool for something distinctly avant gard that’s a little harder on the ears. But that’s the whole point, says Casablancas. As he reveals exclusively to Huck: “In music my main goal is to try and make stuff that is hopefully edgier and weirder but make it mainstream. I think I’ve tried to do that since forever.”

To read our exclusive cover story in full, pick up Huck 47. Until then here are some highlights, brought to life for your eyes and ears.

Casablancas’ love for Lou Reed surfaces in almost every interview he ever gives, and it was no different when we sat down with him recently in Philadelphia ahead of a Voidz show. “They were way ahead of their time, but they were a total commercial flop,” he tells us. “Then ten years later all these bands came out. Televison, the Talking Heads, New York Dolls, that whole era. I too am influenced by The Velvet Underground, but like in the 1990s!” Here’s a sweet little cover of Lou Reed’s ‘Walk on the Wild Side’ that captures The Strokes at their effortless best.

The first album from Julian Casablancas + The Voidz is a genre-buster of a debut that skips from synthy afro-pop and hardcore punk to growly death metal. Proudly touted as his “first protest record”, Tyranny may well be Casablancas’ way of defying expectations, but it also has a broader mission: to make edgy the new cool. Far from speaking to the in-crowd Julian Casablancas wants to radicalise the mainstream. But first he has to tackle the hypocrisy that keeps good music in the shadows and truth behind the scenes. “For me there is a parallel between quality in music and truth in politics,” he says. “I think both are repressed and hard to find. The powers of money counter those forces of quality in music and truth in politics.”

This video, ‘Where No Eagles Fly’, is an angsty statement of intent straight out of a suburban teen dream, complete with hand-held shaky cam, guitar close-ups and the spikiest leather jacket you’ve ever seen.

Casablancas is outspoken about corporate control of public life and is trying to fight the good fight with his own independent label, Cult Records. When talk turns to politics, and his own personal manifesto for social change, he name-drops two very different thinkers as ideological leads: linguist and voice of the left Noam Chomsky; and British ‘revolutionary’ Russell Brand. So, in the mash-up spirit of the internet, here’s Russell Brand doing his best Chomsky and going off on one completely on Democracy Now.

Buy Huck 47 – Julian Casablancas – in the Huck Shop now or subscribe today to make sure you don’t miss another issue.

Linkedin
RELATED ARTICLES
OTHER ARTICLES
Proponents of personality tests argue that they’re necessary to find the best person for the job – but in practise, they’re often discriminatory.
We sat down with trans comic Jordan Gray to discuss the power of portraying complex characters, giving humanity the benefit of the doubt and getting naked on live TV.
The photographer describes taking inspiration from Magnum photographers to craft an intimate and revealing portrait of the city.
Ireland’s national sports are modernising. At the forefront of this movement is Na Gaeil Aeracha, the country’s first ever queer GAA club.
How the sounds of nature, air force bases, walking across the country, Windrush and synthesisers have influenced one woman’s journey through music and life.
Through stills, anecdotes and film criticism, a new book examines the portrayal of women’s destructive emotions, reframing it as a challenge to patriarchal structures.