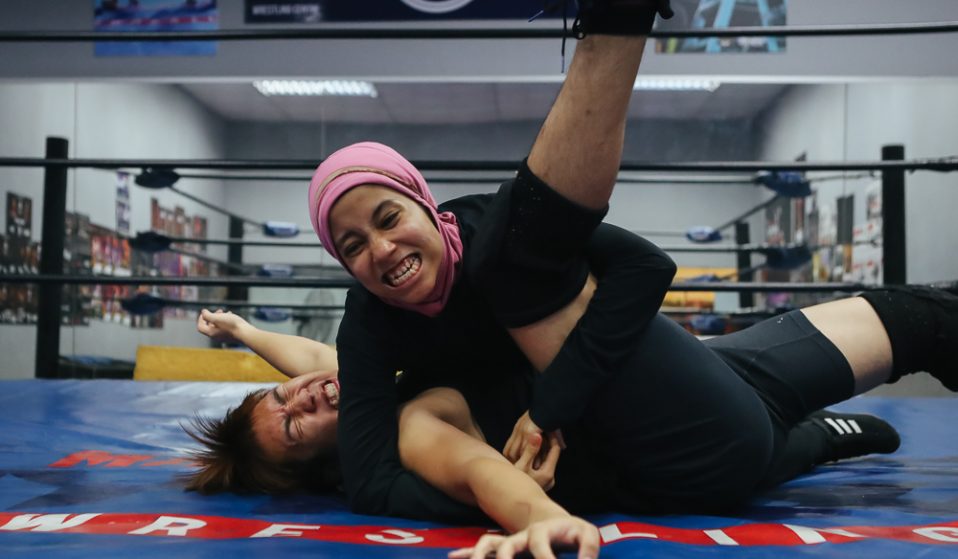 At five-feet tall and around 94lbs, the 20-year-old doesn’t look like your typical wrestling star – but that hasn’t stopped her yet.

At five-feet tall and around 94lbs, the 20-year-old doesn’t look like your typical wrestling star – but that hasn’t stopped her yet.

A version of this story appears in Huck 73: The Sanctuary Issue. Get your copy now, or subscribe to make sure you never miss another issue.

Nor Diana – aka Phoenix – is growing increasingly excited as she recalls the biggest night in her wrestling career so far. “As soon as the referee called the end of the match I cried,” she says, grinning. “It changed my life forever.”

The 20-year-old Malaysian, who stands at just five-feet tall, is currently blazing a trail through the wrestling industry as the world’s first hijab-wearing pro. The match she’s referring to is her appearance at Wrestlecon – Malaysia’s biggest wrestling championship – in the summer of 2019: a fight that had her squaring off against four male opponents to be crowned her country’s champion.

Diana remembers how, on the night, she wasn’t going to win. This isn’t her being modest, or confirming that the odds were stacked against her, either. Because, as is the case with all pro wrestling, there was a script to be followed: the winner had already been predetermined as part of a broader narrative. But then something unexpected happened.

“At the end of the match I lay in the ring defeated,” she remembers. “But then [my opponent] Shakuat pulled me [up] to pin one of my other opponents, even though that wasn’t scripted. I realised then that I was going to win.” 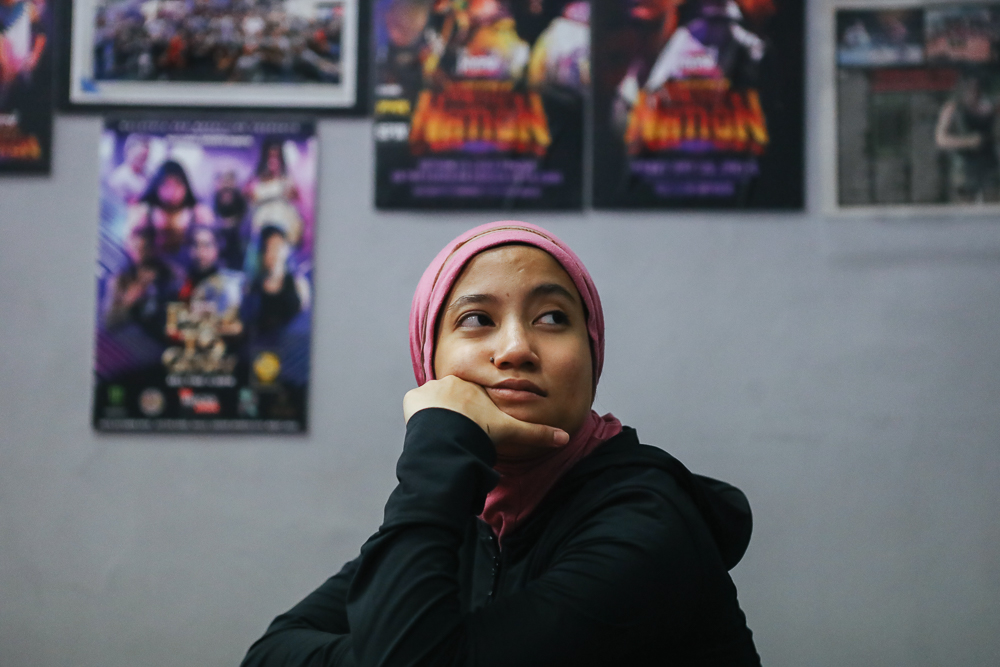 Flipping the script was a bold move for the wrestlers. But it was a public declaration of solidarity, made out of their respect for Diana – who uses a pseudonym to protect her real identity. When she raised the belt as the first ever female Wrestlecon Champion of Malaysia Pro Wrestling – a golden phoenix across her torso, her red-trimmed hijab matching her costume – all of the hardships she’d endured suddenly felt worthwhile.

“They saw something in me. It’s not easy being the champion because, after that, everyone has a target on you. I was crying my eyes out so bad, my fans were cheering for me… oh man, it was so amazing. During that time, all of my struggles went away.”

Struggle is something that Diana is familiar with. As a woman wrestler wearing a hijab in what is still a moderately conservative nation, she faced opposition when it came to her first taking part in wrestling. (Her involvement in the sport has since generated criticism in certain sections of Malaysia’s online communities.)

On top of that, though, was the challenge of overcoming her shyness – something she has grappled with her entire life. When she first enrolled for wrestling lessons at the age of 15, Diana’s introversion was so severe she could barely speak. Naturally, she was worried how people would react when she first stepped into the ring. 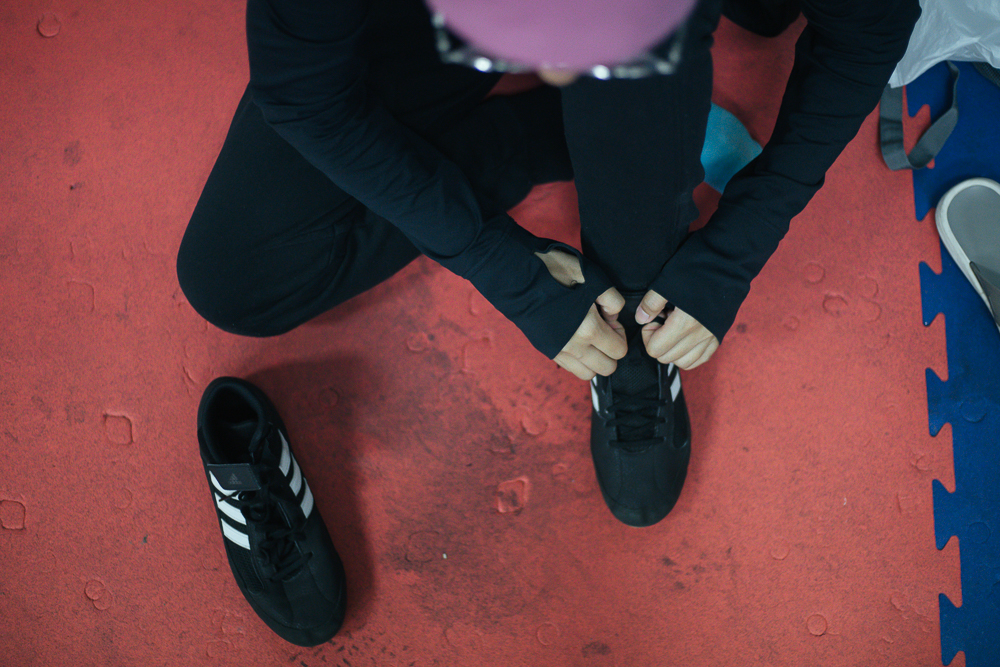 But Diana lived for the sport. Sharing a family home in Puchong with four brothers, she grew up watching the likes of Dwayne ‘The Rock’ Johnson on TV and played wrestling games on the PlayStation. Weighing an average of 94lbs, Diana might not have aspired to cut a similar figure in the ring as the wardrobe-sized men she idolised – Johnson, for instance, is 6ft 5in tall and believed to weigh around 260lbs – but she was fascinated by their onstage personas all the same.

“They’re like heroes or something,” she says. “When I began wrestling I was really nervous because I have a small figure, but then I watched [American wrestler] Sasha Banks, [who] is really aggressive and fun to watch. I thought, ‘If she can do it then so can I.’”

Despite her meekness when she first joined the school, Diana’s longstanding coach, Ayez, saw a natural ability and set to work immediately. Due to a last minute dropout, it transpired that it would be less than two months until she appeared in her first public match – an unusually short lead-up to a newcomer performing in front of a crowd. It threw Phoenix, with her hastily assembled second-hand costume, right in at the deep end.

But at the same time, the looming deadline jump-started the career she’d always dreamed of. In workshopping the character of Phoenix – an agile, acrobatic showwoman who sports a black leather outfit embossed with flames – Diana began to slowly build up her confidence. Since enrolling, she hasn’t missed a training session to date. 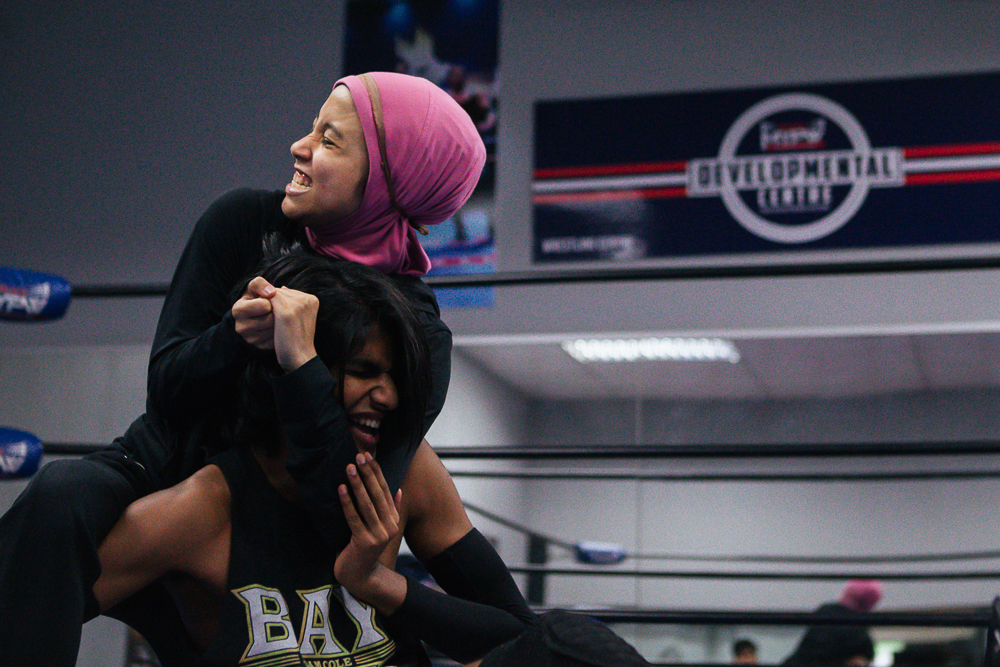 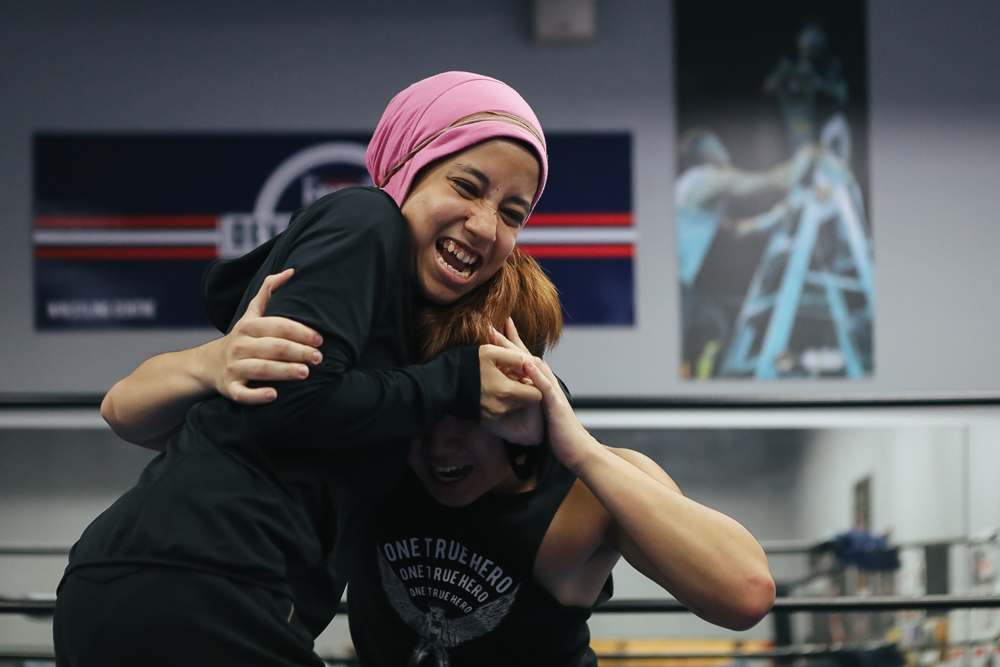 By day she maintains the ordinary life of a normal young person – she adores fried chicken and listens to Billie Eilish religiously, as well as the likes of One Direction and American pop outfit PrettyMuch. (“It doesn’t really fit with my character but yeah, Diana loves boy bands.”)

But when Phoenix steps into the ring, her interests shift from squeaky clean singers to suicide dives – a lethal move that happens to be her favourite. “A pro wrestler did this move [once] and he died,” she says, referring to the accident that led to Mexican wrestler La Parka’s untimely death. “What I do is I will run to the ropes then fly from the second ropes to my opponent. It really is terrifying, and I [sometimes] get injured doing it. But I love how the fans react to me.”

In the ring, Phoenix is near-silent save for a rousing, deep-rooted battle cry. She’s impossibly fast, scaling fighters twice her size in the blink of an eye, and leans into her signature, gravity-defying leaps with an impressive confidence. This is a wrestler who knows how to take full advantage of her size, or lack thereof.

For that first match and three years that would follow in the public eye, Diana kept her identity secret: instead of showing her face, she opted to wear a traditional lucha mask, such was her anxiety about how people would respond to her entering the sport as a hijab-wearing woman. But in December 2018, the mask came off as part of her character’s big storyline: a forfeit for losing her match against opponent Luna at a Wrestle Nation match in Kuala Lumpur. With the reveal, all of Diana’s worries about her identity were put to rest. 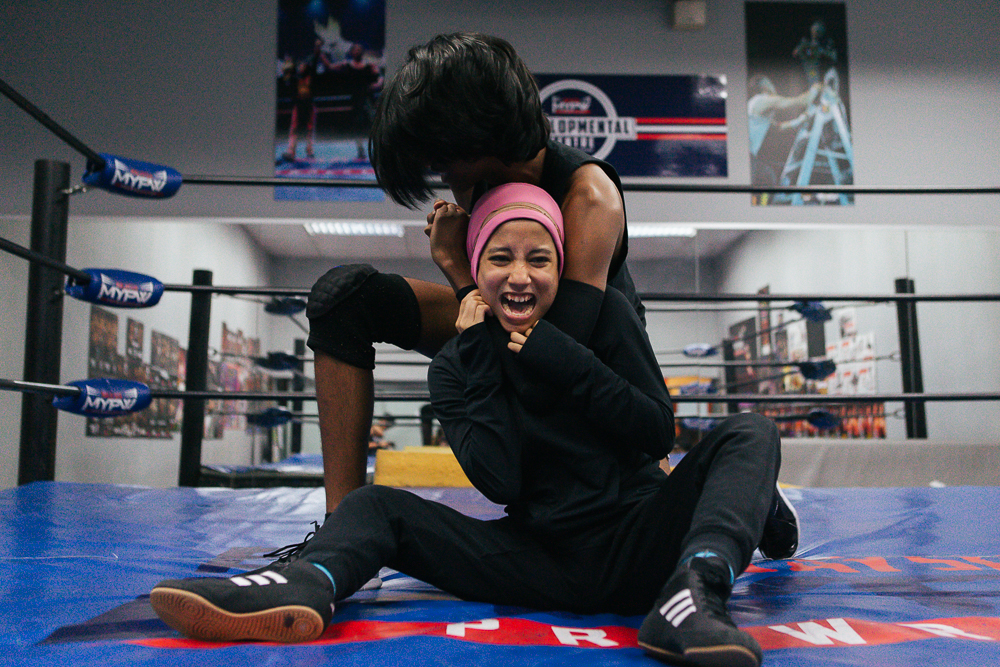 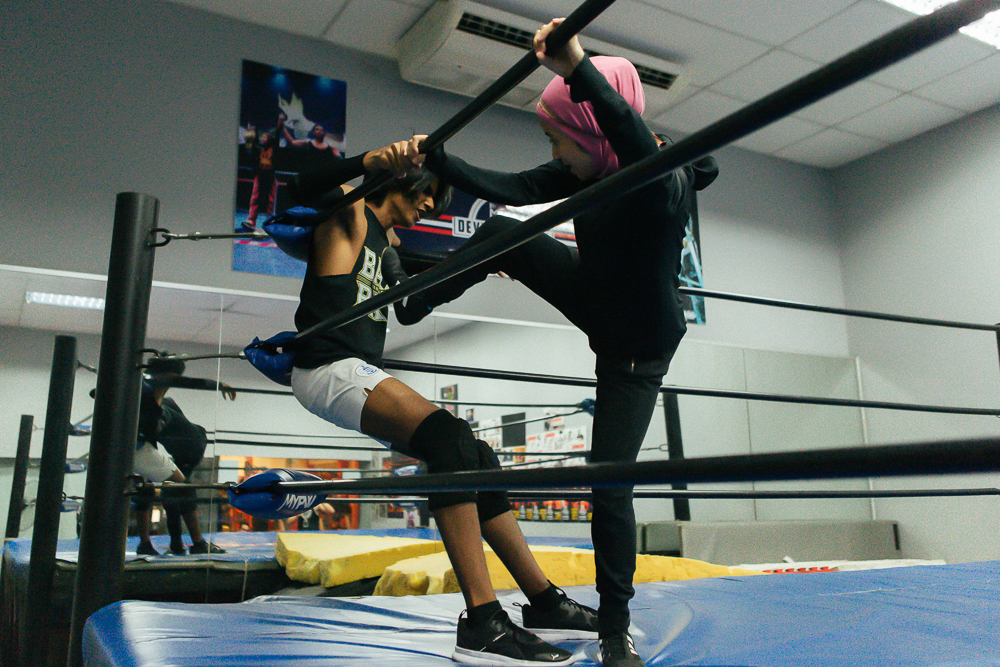 “Sometimes it feels like I want to give up,” she says. “But when the show finishes and I meet with the fans, they always say great things to me and that motivates me to work hard. I got a lot of messages from [people] saying that I inspired them, which is amazing because I never thought as a wrestler I could make a change, or make an impact on people’s lives.”

The grand unmasking was met with praise and encouragement from fans, and, following her big championship win in 2019, Phoenix’s following began to swell – thanks in part to a Twitter shout-out from American-Muslim wrestler Mustafa Ali. “Hey [Phoenix], just read an article about you,” wrote the WWE star, who boasts almost 200,000 followers on the app. “Just wanted to let you know I’m super proud of you. Rocking the hijab while wrestling! Insane!”

However, in spite of international endorsements and a career that takes her all over the world (she made her London debut in early 2020), Diana still maintains a position as a hospital clerk back home, juggling her day job with a rigorous schedule with Ayez. She trains twice a week – usually Wednesday and Saturday – for at least three hours. They’ll start with warm-ups and drills, before moving onto technique and “the art of storytelling”. 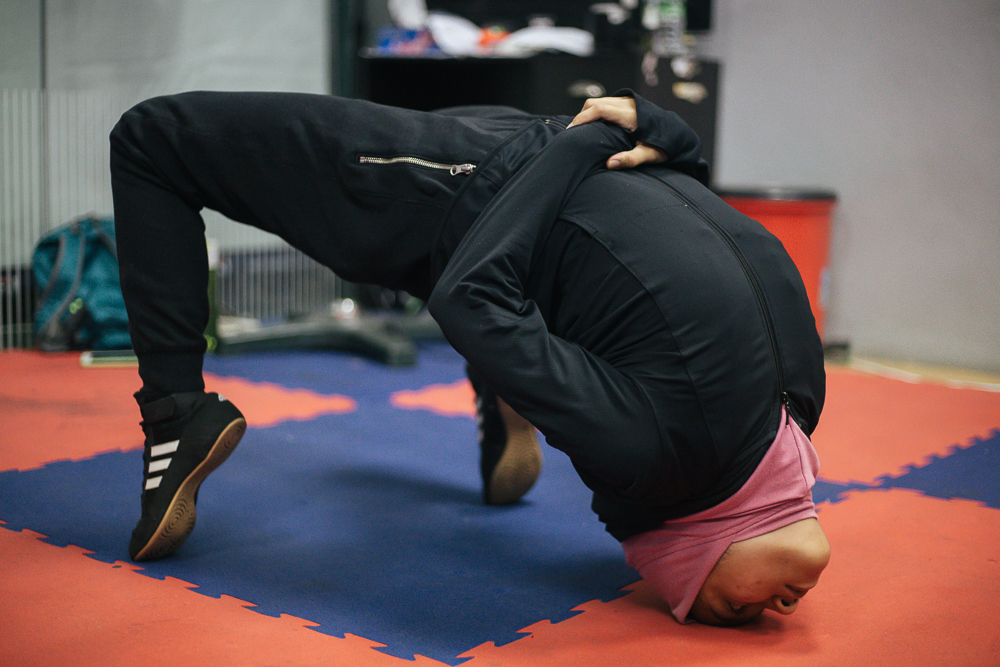 As she’s yet to be signed by a big wrestling company, she has to make ends meet in between matches: she will work from 8am through to 5pm, before heading directly to the training centre where she practices until late. “It’s a struggle but I have to invest money in my training – my costume is really expensive. Then I have to balance time with trying to see my family and my friends.”

The wrestling scene in Malaysia is small, hence why Phoenix’s exposure thus far has been limited. But it is growing: three more girls in hijabs signed up for training following her championship win. (More women in general have joined the gym too, she says.)

It’s easy to see why people take to Diana. In conversation, her shyness melts into a warm and self-deprecating chat – she’s quick to laugh at her boy band obsession. She seems at her most confident when speaking about her dreams: not of becoming a winner, but an inspiration to others. The palpable love that she holds for her fans is touching.

“In America and Japan they have a lot of female wrestlers and a lot of promotion, which is something that we don’t have yet in South East Asia,” she says. “But we’re getting there.” 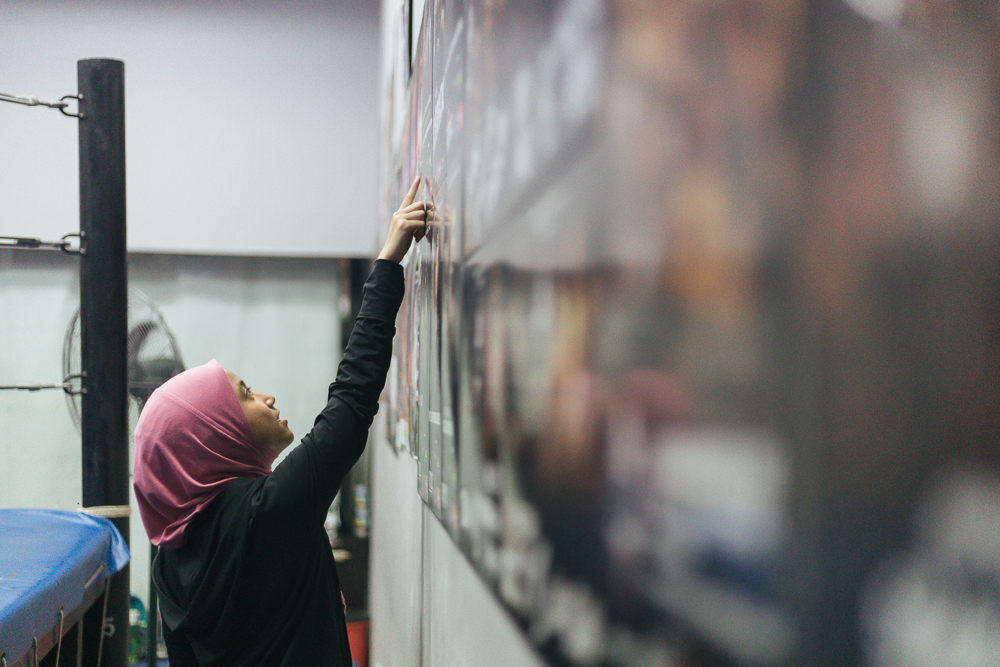 “I think there’s a lot of women who want to join pro wrestling, but tend not to because, like me, they’re very shy. We need to show more of what women can do, because there’s no difference between men and women in wrestling – we’re all just wrestlers.”

Today, Diana fells hopeful about her future. But she’s grounded, too. She’s aware that some of the biggest names in wrestling took a decade to get to where they are – and this was without some of the obstacles that she encounters every day. What’s most important to her is the legacy that she will leave behind.

It’s this vision of a greater, more inclusive landscape – and the determination to go out and help create it – that makes Nor Diana as much of a revelation outside of the ring. In real life, she may not wear the orange and red flames of her suicide-diving alter-ego – but that same fire is certainly there.

“The only thing that can stop you from doing what you love is yourself. You have to just go for what you want,” she says. “When I work, I rise again and again. This is why the name Phoenix suits me.” 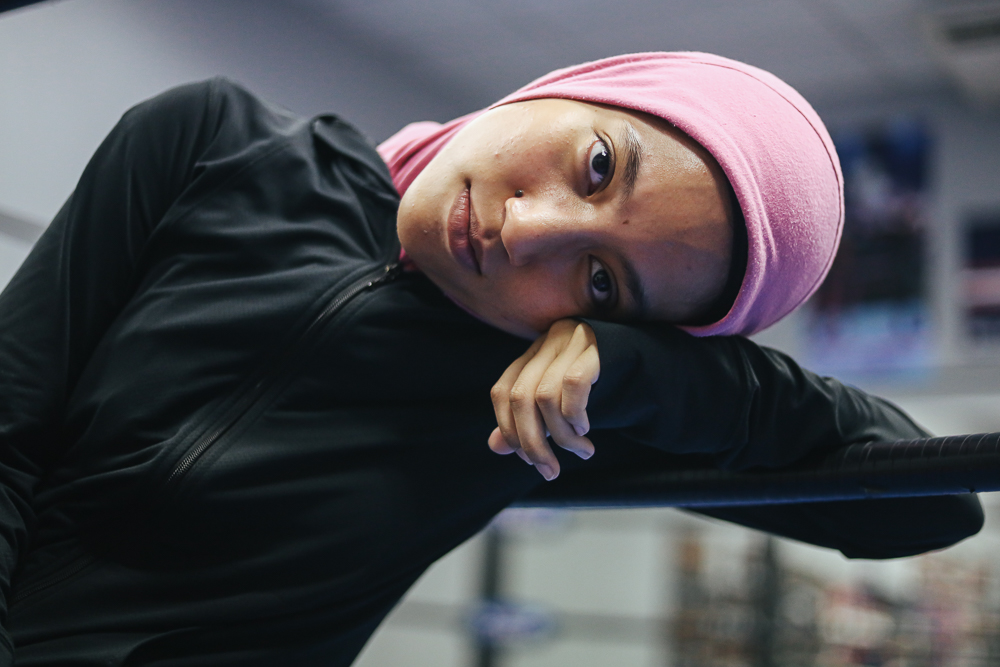 This story originally contained a byline error. It has since been rectified.

Linkedin
RELATED ARTICLES
OTHER ARTICLES
The photographer reflects on building trust with his subjects and using the street as his studio.
A new book traces the legislation’s tumultuous history and the lasting impact its had on LGBTQ+ activism today.
Photographer Melanie Nissen recalls capturing the characters, fashions and rarefied chaos of a rapidly-expanding set of punk bands who helped to redefine the genre.
While police claim that body cams increase accountability, the proliferation of the tech raises questions over who it really serves.
Hundreds gathered together to protest the policing bill by making as much of a racket as possible.
From the queues outside to the last ones standing, Francesco Mellina’s new photo book follows a night that has gone down in the Northern-Soul history books.