Issue Archive / Story Behind the Still: How it feels to be gay in Russia 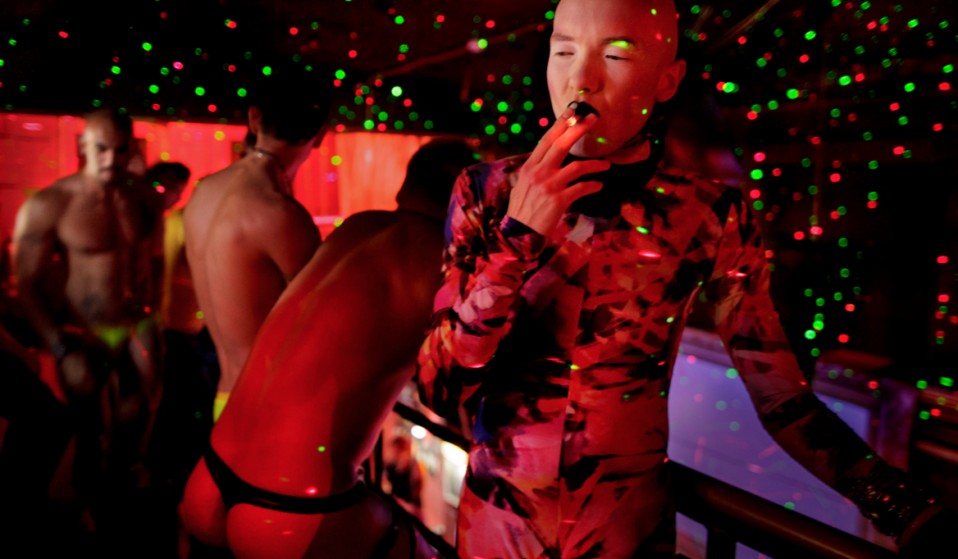 Photographer Mads Nissen reveals how an image captured inside a Russian nightclub became a symbol of self-expression.

Twenty-seven-year old Ruslan, a ballet dancer at the Academy of Russian Ballet, smokes a cigarette at the Central Station, an LGBT nightclub in St. Petersburg, Russia. He was once married to a woman for five years but, following their divorce, he came out as gay. Mads Nissen reveals how he found his subject and why it became a symbol of self-expression.

Mads Nissen is a 36-year-old photographer from Denmark, where he studied photojournalism at the Danish School of Journalism in Copenhagen.

His work has documented issues from the food crisis in Niger to life in the Amazon rainforest, appearing in the likes of of Newsweek and Time, while earning several awards and distinctions along the way (including World Press Photo of the Year in 2014).

“I was in Saint Petersburg in the summer of 2013, not long after the Duma [Russia’s assembly] implemented the so-called ‘Anti-Gay Law’. I wanted to take a look at what was happening relating to that, so I went to a Gay Pride march where something happened that changed everything for me.

“I was standing next to a young man named Pavel when, out of the blue, a homophobe comes up and screamed in his face, asking if he’s a faggot. Pavel answered very calmly that yes, he is a homosexual, before the homophobe punches him square in the face.

“I decided to pick up my camera and really do an in-depth story on homophobia in Russia. That’s how the project started and I just kept going back. I was trying to understand what how it feels to be gay in Russia right now.

“A lot of the time when I see [instances of] human rights abuse, I don’t really feel it – I read the report or notice the headline… but it doesn’t really become personal to me. What I wanted to do with this work was just that: make it personal, intimate.

“People think there aren’t gay clubs in Russia, but there are. The law doesn’t make it illegal to be gay, but what you cannot do is make ‘gay propaganda’, whatever that is, with children present. So these nightclubs exist, but of course it can be very dangerous to go there, especially when leaving the nightclub, because there might be homophobes waiting outside to catch you.

“Ruslan [the man in the picture] was married to a woman and, after so many years, suddenly jumped out of the closet. He can be who he really wants to be. I’m not gay, but I think my job is to at least try to understand how it must be to deny your own sexuality for such a long time before you can finally recognise yourself.

“I think there’s a tremendous power and strength that takes. I imagine that if you’ve been denied something your whole life, when you come out you want to try everything. You want to really explore it, you know? I think that’s what he’s doing with this suit that he’s wearing.

“Obviously [taking a picture like this] is all about trust. The nightclub will often deny photographers entry, with good reason. In this nightclub, some people might have spoken a bit of English, but not very well, so I took a friend of mine – a former student – along.

“Obviously I like the lights and I like the scenery in the shot, but to me it’s a symbol. You can only oppress something for so long before it bursts.”

Find out more about Mads Nissen’s work at Panos Pictures.

This photograph appears in Huck 55 – The Freaked Out Issue. Buy it in the Huck Shop now or subscribe to make sure you never miss another issue.

Linkedin
RELATED ARTICLES
OTHER ARTICLES
A series of photos by the late Jerry Dantzic taken in 1957 show a tender side to the iconic Jazz musician.
After rewriting the indie rulebook with her devastating songs about romantic longing, the singer-songwriter is now imagining a future in which the artist is no longer a product.
A sharp increase in officers armed with the electrical weapon is resulting in serious injuries and deaths.
From the chip shops, to the bingo parlors and burlesque dancers, photographer Mike Coles remembers capturing scenes of holidaymakers by the English coast.
With the UK now set to run out of vaccines, people working in the sex industry – particularly outside of major cities – have been left especially vulnerable, reports Brit Dawson.
With the virus now a global health emergency, we must take steps to fight misinformation and demand a swift UK-wide vaccine roll out, writes Phil Samba.