Issue Archive / Story Behind the Still: The defiant joy of Afghan refugees arriving on Lesvos 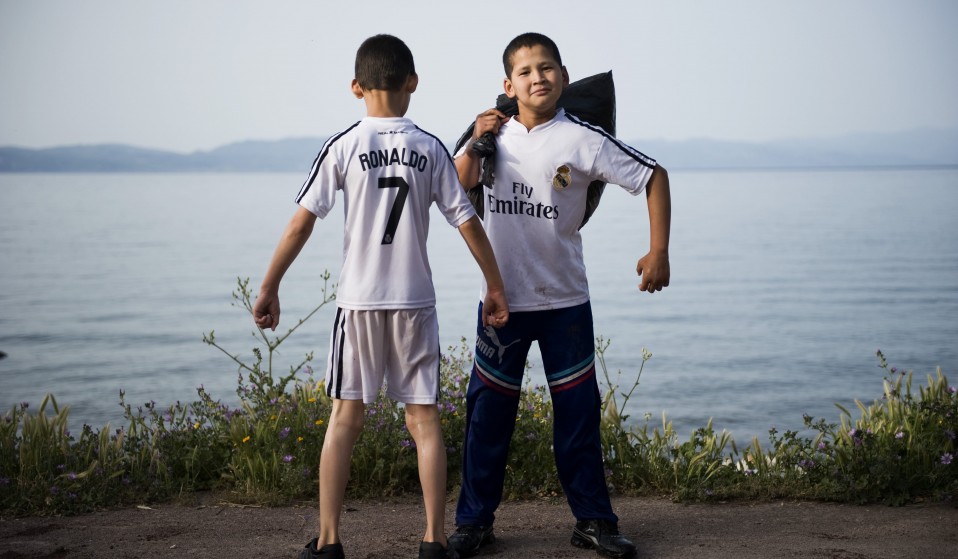 Photographer Georgios Makkas reveals how this image of two young boys challenges the portrayal of refugees as miserable victims.

Two Afghan boys wearing Real Madrid T-shirts pose for a picture minutes after their boat landed on Skala Sykaminias beach on the Greek island of Lesvos. Hundreds of refugees, make this journey every day, boarding overcrowded inflatable boats to flee war and violence. But in the eyes of right-wing anti-immigration groups, this twosome are something to be feared. This is the story behind one of the boldest image in Huck’s Freaked Out Issue.

Georgios Makkas is an award-winning photographer who began shooting at the age of 15, when he joined the Photography Circle in Athens – a non-profit cultural society. He later studied at the European School of Photography in Athens, where he’s from, and moved to the UK to attend the Documentary Photography course at the University of South Wales in Newport.

In 2002, his documentary project about the depopulation of rural Albania won the first prize in the Observer Hodge photographic award. In the years since then, he has worked as a freelance photographer around the world and is represented  by Panos Pictures, a London-based photo agency specialising in global social issues.

“I had a feeling, about the spring of 2015, that something was going to happen because the government in Greece had changed and declared that they were going to open the borders. There was something in the air.

“I decided to go to Lesbos in May – before the big wave in July and August. A lot of my friends who are journalists advised me to go to Kos, to go to other islands south of Crete, where there were a few hundred refugees. But Lesbos made more sense to me because it was closer to Turkey and I was going there for my holidays.

“It was a bit quiet when I arrived and asked locals where the landings were happening. They said it was somewhere in the north but they didn’t tell me a specific place, so I was just driving around, trying to find some wreckage or something, evidence of people having landed there.

“I spent a couple of days there without seeing anything, just wandering around the beach. One day I met Costas – a big, smiling fisherman who goes out in his little boat and saves people. I gave him my number and he called me at about 5.30 in the morning to tell me that a dinghy was approaching. I ran to the beach and got there just in time for the landing.

“It was a boat with Afghans. I remember minutes before they landed, they were singing. Maybe it’s because they were happy they were finally in Europe. When they got out, very quickly they took off their wet clothes, put some dry clothes on, and then started walking towards the village [Moria, where the First Reception Centre is located].

“From the moment they jumped off the boat, those kids were posing in front of my camera. All the time they wanted to be the centre of attention. While we were walking on the road by the seaside, they posed for me and I took that picture. Then they carried on walking and I guess they got to the camp at Moria, as I didn’t see them after that.

“I chose that picture because it was full of energy and it had a positive message, in a way. Usually refugees are portrayed as miserable… or not always miserable, but they’re going through such a horrible time. They’re not smiling, and so on. Those two little kids were full of confidence and full of life.”

Linkedin
RELATED ARTICLES
OTHER ARTICLES
As she gears up for the release of her first book, the 24-year-old climate activist talks standing up to authority and building a more inclusive movement.
AI companies that develop image-generators using copyrighted artwork from the internet are coming under fire from artists who say that it amounts to theft.
Filmmaker Laura Poitras discusses her new documentary which traces the remarkable life of the artist-activist and the impact of her battle against the US opioid crisis.
Activists and campaigners are fighting back against new laws that would seriously undermine the ability to take industrial action, calling it an attack on fundamental workers' rights.
A new exhibitions brings together the work of photographers who documented the deep unrest of these pivotal decades.
After building his reputation covering the US civil rights movement in the 1960s, the photographer went on to produce some of the most enduring images of the past century.