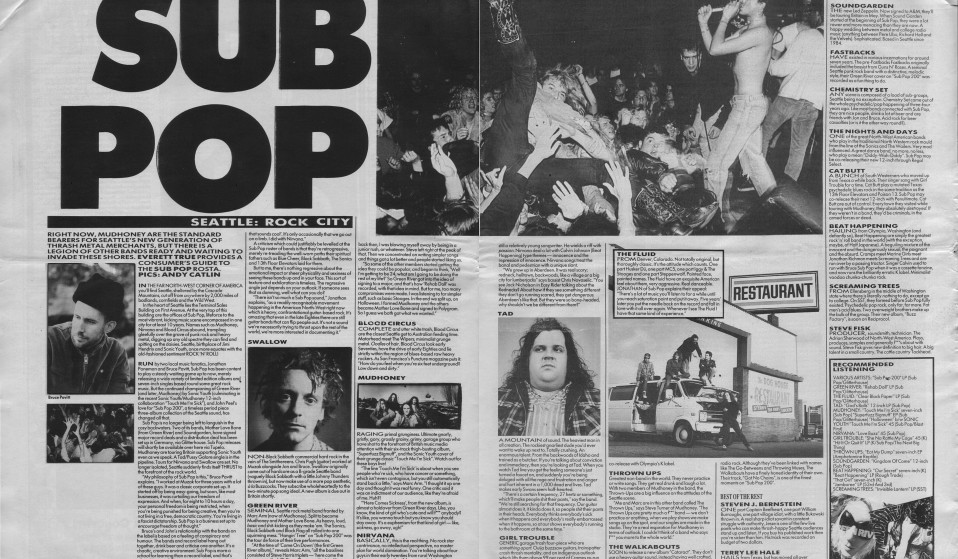 Bruce Pavitt’s iconic label Sub Pop lead the indie charge out of Washington state and introduced Nirvana to the world. Here are some of the label’s biggest moments.

Bruce Pavitt’s iconic label Sub Pop lead the indie charge out of Washington state and introduced Nirvana to the world. Here are some of the label’s biggest moments.

Bruce Pavitt couldn’t have imagined what he was creating when he started broadcasting his radio show, Subterranean Pop, on Evergreen College’s radio station in the mid 80s. Sure, he had the idea of pushing his home state of Washington into the mainstream, or at least standing up for independent music on a wider scale, but it’s fair to say it spun out of control pretty quickly.

“It was all about the media infrastructure,” Pavitt told us in Huck 50, “and that’s what the Pacific Northwest started to develop… I began writing about super DIY music in The Rocket. I made five hundred copies of my own fanzine, Sub Pop. I had a radio show at KAOS and another show at KCMU.”

Pavitt puts the label’s explosion into the mainstream down to MTV’s decision to put Nirvana’s ‘Smells Like Teen Spirit’ into regular rotation. And he’s got a point – that was huge. But Sub Pop’s ability to remain at the forefront of independent music for three decades – pushing through financial turmoil and industry bullshit – has depended just as much on the label’s ability to both understand and inform the musical landscape around it.

To illustrate that, we’ve gathered some of Sub Pop’s finest artists together into some sort of glorious modern mixtape.

Mudhoney – ‘If I Think’ from Superfuzz Bigmuff

For an insight into the world of American independent music, no simple biography or collection of anecdotes will ever match up to Michael Azerrad’s Our Band Could Be Your Life. Of the thirteen bands that Azerrad talks about in the seminal text, Mudhoney provide the clearest lens into grunge’s filthy genesis, setting down the sonic framework for the mainstream invasion that followed soon after.

Sebadoh are another group that Our Band… devotes plenty of time to. Although rather being given their own space, they are relegated to a side story in the tale of Dinosaur Jr. In fact, that’s been the story of their career, deemed a side-project for bassist Lou Barlow when J Mascis became too difficult to deal with. However true that may be, many of Sebadoh’s records trump even Dinosaur Jr’s most celebrated works. There. I said it.

When hardcore moved out of the cities and into the suburbs, the content of independent music began to change, shifting from the outwardly political to the personal. Sunny Day Real Estate weren’t the first band to exemplify this –Rites of Spring got there long before – but they were one of the first bands to lay down the sound for what would become known – and later reviled – as ‘emo’.  ‘Seven’ – introduced here by a very young Jon Stewart for extra kicks – is taken from their seminal Sub Pop-released LP Diary, an album that remains as ferocious and exhausting two decades on as it must have been at the time.

Bruce Pavitt may have left Sub Pop in 1996, but the label continued to grow in his absence, both economically and musically. Shabazz Palaces is the coming together of Digable Planets’ Butterfly (Ishmael Butler) and multi-instrumentalist Baba Maraire and the results are just as arresting as Butler’s work with his first group. ‘#CAKE’ from last year’s Lese Majesty, demonstrates the group’s predisposition to experimental, occasionally disorientating tracks to back up Butler’s cutting lyrics.

Sleater-Kinney – ‘Bury Our Friends’ from No Cities To Love

Tied to fellow PNW label Kill Rock Stars for most of their career, Olympia trio Sleater-Kinney jumped ship to Sub Pop for 2005’s The Woods before calling it quits and leaving a generation of young fans to fill in the gaps without them. When Sub Pop re-released every one of the band’s records as a box set at the end of last year, few people expected a full-on reunion. But in the midst of the band’s staggering back catalogue was a separate disk with nothing but a date in the near future printed on it. The 7″ played ‘Bury Our Friends’, a glorious statement of intent that proved to be a lead single for this year’s No Cities To Love. Sleater-Kinney were already one of the greatest rock bands of all time. Making a comeback this good was almost audacious.

Another duo at the forefront of the rising Northwest hip hop scene, THEESatisfaction were snapped up by Sub Pop after featuring on Shabazz Palace’s 2011 LP Black Up. Their two EPs since then have showcased slanted take on R&B. Take, for example the sensual slow burn of ‘Deeper’.

Linkedin
RELATED ARTICLES
OTHER ARTICLES
With inflation now at a 40-year-high of 9 per cent, demonstrations organised by TUC took place to demand action from the government.
Freddie Miller’s new series of photographs investigates who today’s trainspotters are and what drives their unfettered enthusiasm.
The past five years have seen a staggering increase in foodbank usage across the UK. Now, staff fear things are set to get much worse.
In the latest instalment of Photographers in Conversation, the chronicler of raves, protests and beyond explains why he’s drawn to such specifically visceral environments.
The author discusses the all-consuming nature of heartbreak, and turning the experience into an incisive exploration of love and loss.
On the fifth anniversary of the tower fire, around 18,000 joined the walk to remember the 72 dead and to demand justice.