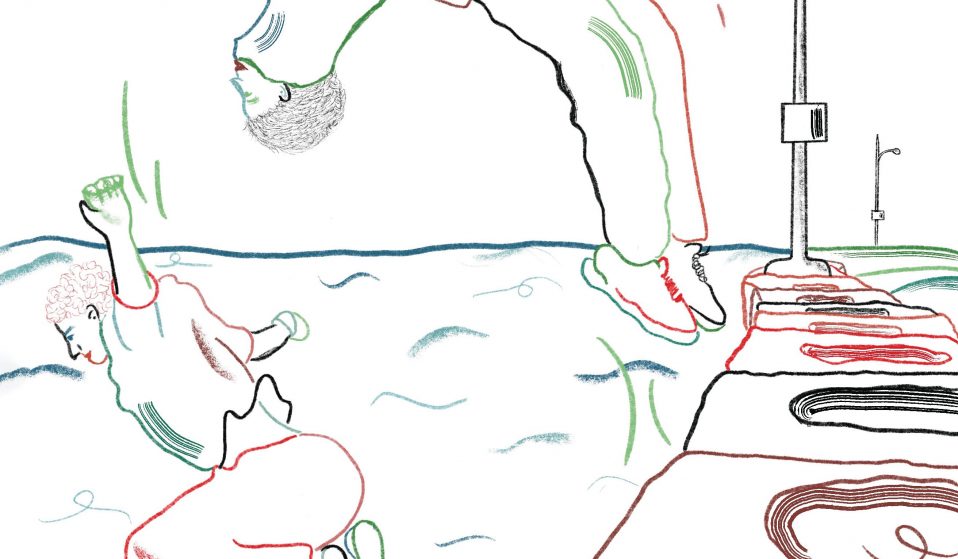 A group of young Palestinians have found temporary freedom in the act of parkour, reimagining wreckage and ruins as a series of high-octane playgrounds.

A group of young Palestinians have found temporary freedom in the act of parkour, reimagining wreckage and ruins as a series of high-octane playgrounds. The fearless collective see freerunning as a way of taking their immediate environment to its absolute limits – and, in the process, reclaiming some of it.

Young Palestinians are jumping across the wreckage of the al-Jalaa tower, an 11-storey building in Gaza once home to the Associated Press and Al Jazeera television, as well as 60 residential homes.

Dozens of the group, many of them just teenagers, scale the debris. Bounding from ruin to ruin, they perform daunting tricks at stomach-churning heights. Running across rooftops, they leap and swing off the exposed scaffolding, before tumbling onto the sand floor below.

These images first began to surface online in May 2020. Just hours before, the Israeli army had bombed the building with fighter jets as part of a relentless 11-day conflict which saw hundreds of Palestinian people killed, thousands injured and tens of thousands more displaced. Retaliatory rockets from Hamas resulted in the death of 13 people in Israel. In this context, the images take on extra weight: each flip, twist, and jump becomes an act of freedom.

“When people see a destroyed building in Gaza, it’s easy to scroll down and forget about it,” begins 25-year-old Ahmad Matar, one of the founding members of Gaza Parkour (Gaza PK), the collective documented that day. “But when you see a person flip off that building, they understand what’s happening in a deeper way. They think, ‘Okay, these people just want their freedom.’”

Originating in Paris in the ’80s, parkour – or freerunning – is a sport where seemingly mundane urban environments are transformed into boundless obstacle courses. This can mean running across buildings, or leaping to improbable heights; vaulting, swinging and rolling. But it’s also about pushing the boundaries of city structures beyond their conventional means. Propelled by the sport’s popularity on YouTube, parkour has evolved into a thriving, expansive community, with thousands of mostly young men competing in competitions across the globe.

For Ahmad, who began performing parkour in 2005 at the age of nine while living in the Khan Yunis refugee camp situated in the southern Gaza Strip, parkour is an escape from the grim realities of the occupation. Now based in Sweden, he recalls the first time he and his friend Mohammed Aljakhabir stumbled across a YouTube video of the sport and became immediately transfixed. “I wanted to feel like I could fly,” he recounts.

It wasn’t long until the pair had recruited others – friends from their martial arts class – to join them. They would visit the nearby cemetery, where they would practice spinning and twirling against walls and levelled surfaces, away from the prying eyes of local residents. “People struggled to understand what was going on at first,” says Ahmad. “They kept on looking at us as if we were doing something weird.”

Without any pros to teach them the ropes, the group relied on YouTube to harness their skills. Learning from each stumble and fall, they began to post videos of themselves online, racking up a global following that would grow exponentially. At the time of writing, their YouTube channel has nearly 22,000 subscribers. “People across the world wanted us to travel and compete in competitions,” notes Ahmad, “but it was hard for us since we can’t go anywhere without a visa.”

For 14 years now, Gaza has been under Israeli blockade, meaning that Palestinians require hard-to-obtain permits in order to leave the strip. Egypt is the main exit point but queues can be vast, and with a daily allowance on how many people are allowed to cross the border, priority is given to those holding Egyptian passports, other foreign nationals, and patients seeking medical treatment abroad. Sporting competitions fall to the bottom of the list. “Most of the time our visas are rejected because of the politics surrounding the crossing [in Egypt],” says Ahmad. “People don’t trust that we’ll return to Gaza.”

For 24-year-old Abdullah Al Qassab, the current leader of the team, this can be particularly difficult. “I’m meant to go to a parkour festival in Italy but I don’t know what’s going to happen… it’s so complicated,” he says. Speaking from the Rafah border crossing in Egypt, his voice crackles between ebbs of static. The atmosphere, he describes, is hellish. “I stay [in Gaza] for my family and friends, but the actual quality of life is shit. There’s no other word for it.” 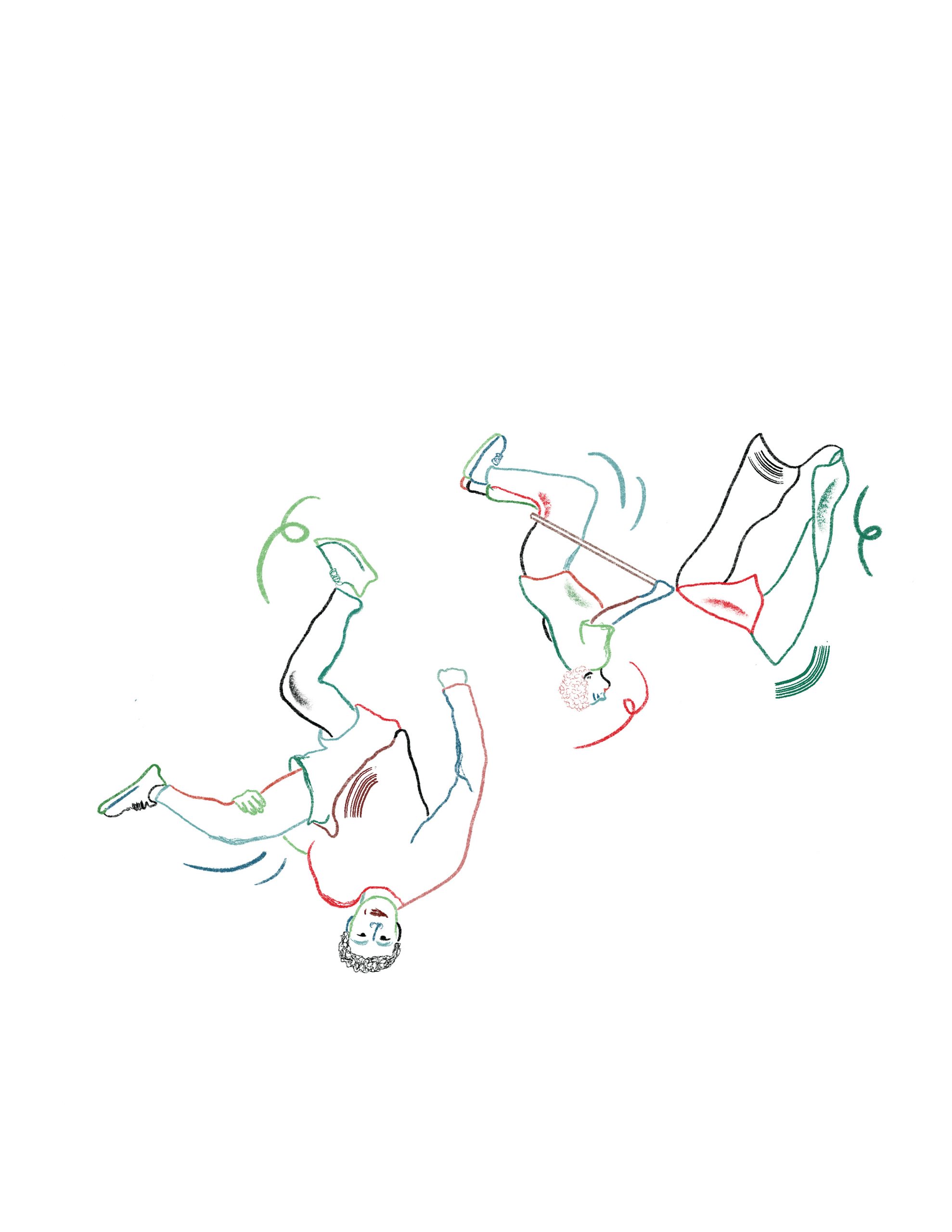 Like Ahmad, he began practising parkour in 2005. “It was the first time I’d seen anything like it before,” he remembers. For Abdullah, and many other members of Gaza PK, freerunning offers a ticket out of Gaza and the poor living conditions characterised by the occupation. The team currently consists of four members who train up to four hours a day, at least twice a week. Other members have either moved abroad or no longer practice due to the widespread poverty in Gaza. “This is the best way I can cope with the situation around us, it lets us forget about it momentarily.” He pauses. “But… you land on your feet and you’re still in Gaza.”

Many of the founding Gaza PK members have since fled the city. Ahmad, who was offered the opportunity to teach parkour at schools in Stockholm five years ago, is scared to return home to his family, out of fear that he might be unable to leave again. “I’m working a dream job and get to travel the world for parkour competitions. I don’t want to miss out on all of that just because I made the decision to go back.”

Despite this, he continues to support the Gaza PK, representing the team at international competitions. “One of our friends is in Sweden with me and another is in Italy,” he explains. “The one in Italy injured his back doing a show for his municipality. He fell four metres to the ground and now he’s in a wheelchair. It was hard for him at first, being a professional athlete, but he has adapted now.”

In November 2020, Ahmad helped found the Wallrunners Parkour Academy in Gaza, a non-profit training facility where children can learn and practice the sport under the supervision of members of the team currently based there. Hand-built using materials from the local market, the obstacle course is used by approximately 100 children, who can jump from one wooden block to another, performing somersaults and swinging on parallel bars. There’s also a dedicated weekly session for girls to hone their skills.

“We [have] had over 100 kids training at the academy since opening last year. We’re growing gradually but it’s difficult to get sponsors since we’re not recognised as a country,” says Ahmad. “We asked if people could donate a little bit of money to help us pay the rent, but it’s hard because the economic situation is tough. Parents won’t pay for their kids to do parkour when they need that money for food.”

For a generation of Palestinians who have grown up under the oppressive Israeli regime, where unemployment and poverty are rife and movement is monitored by checkpoints, parkour can provide a momentary feeling of freedom. “When I’m in the air, I forget everything,” Ahmad says. “I can just enjoy the moment and escape the problems surrounding me.”

Abdullah agrees. For him, the philosophy of parkour – “find your own way” – also resonates on a deeper level. Failure turns to victory as each hurdle becomes an invitation to keep trying. “In parkour, you move across obstacles with your body, whereas in life, you use your mind,” he says. “Besides, I like the danger.”

“There were many moments when we’d be going to the embassy to apply for a visa and enter competitions,” adds Ahmad. “Each time we would get rejected, it made us stronger. It made us want to try again and again – until we reached our goal.”

When watching Gaza PK, you could be forgiven for thinking that the group’s message is overtly political. The members run and flip across the debris of demolished buildings, often carrying a Palestinian flag that ripples defiantly in the air. But Ahmad tells me this isn’t the case. “Parkour is not political,” he maintains. “It’s a sport that helps us to forget all the political things around us.”

In May 2022, a play inspired by Ahmad’s experience with parkour is opening at The Royal Dramatic Theatre in Stockholm. Choreographed by Örjan Andersson, one of Sweden’s most noted choreographers, and starring Ahmad as himself, Exit Parkour is about the tension between “choosing freedom” yet leaving his family behind – “calling home every ten minutes when the bombs fall”.

For him, the play encapsulates the feelings he shares with all of his fellow Gaza PK freerunners. “We just want to enjoy the sport we love,” he says, “in a place without conflict.” 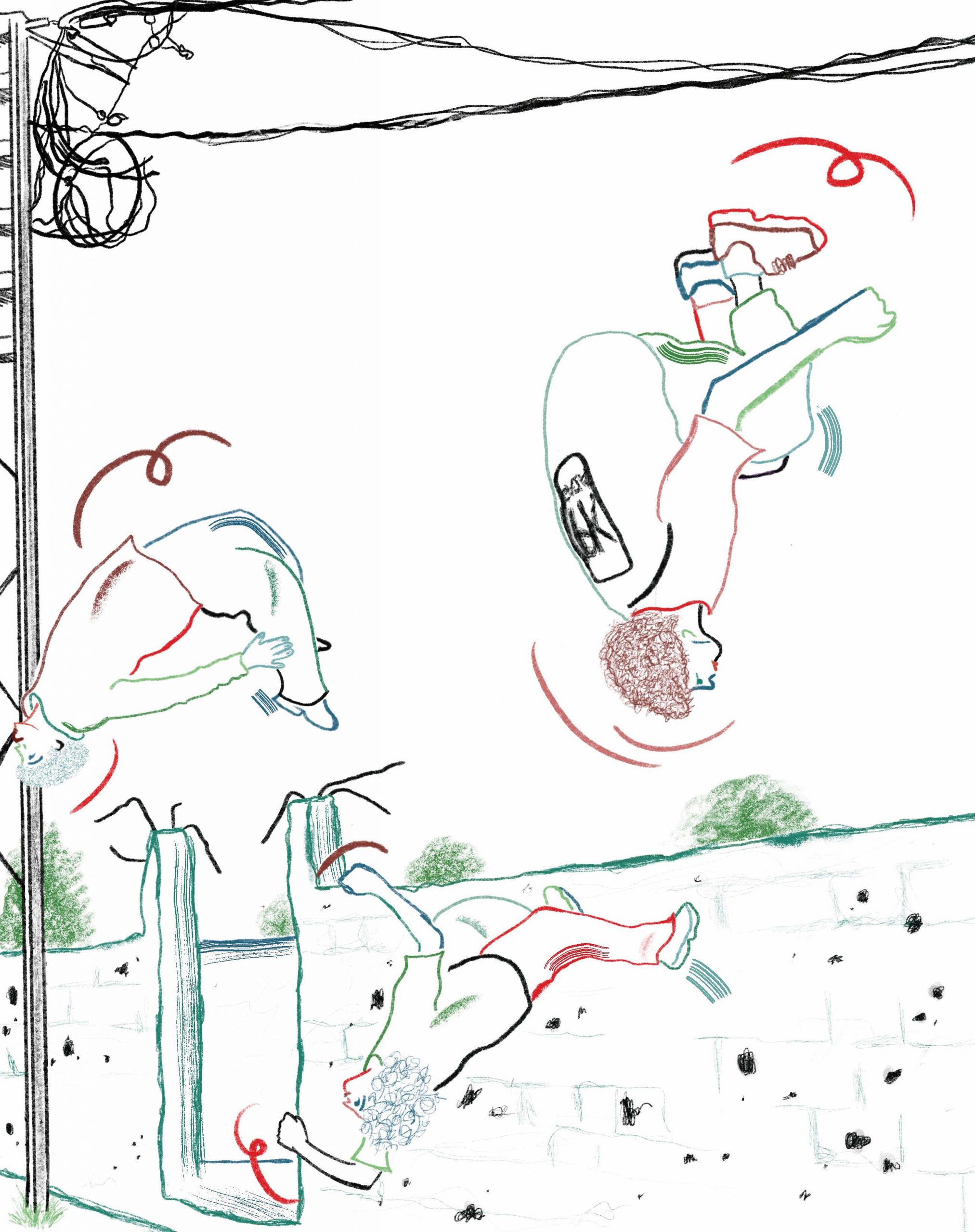 Linkedin
RELATED ARTICLES
OTHER ARTICLES
Sean Maung’s photos are a love letter to the Black and brown communities that make up New York.
Financial turmoil is pushing people who work in the sex industry into more dangerous and desperate situations as a means of survival.
Yesterday thousands gathered outside Buckingham Palace after news of the Queen’s death broke.
The idea that a younger generation is abandoning work has become a popular narrative online, but it doesn’t necessarily reflect reality.
In his 2008 series, the photographer pictured himself as Angela Davis, Martin Luther King Jr., Malcolm X, and other prominent figures.
By turning a real-life crisis into daytime television fodder, TV bosses have once again shown themselves to be completely out of touch with audiences.