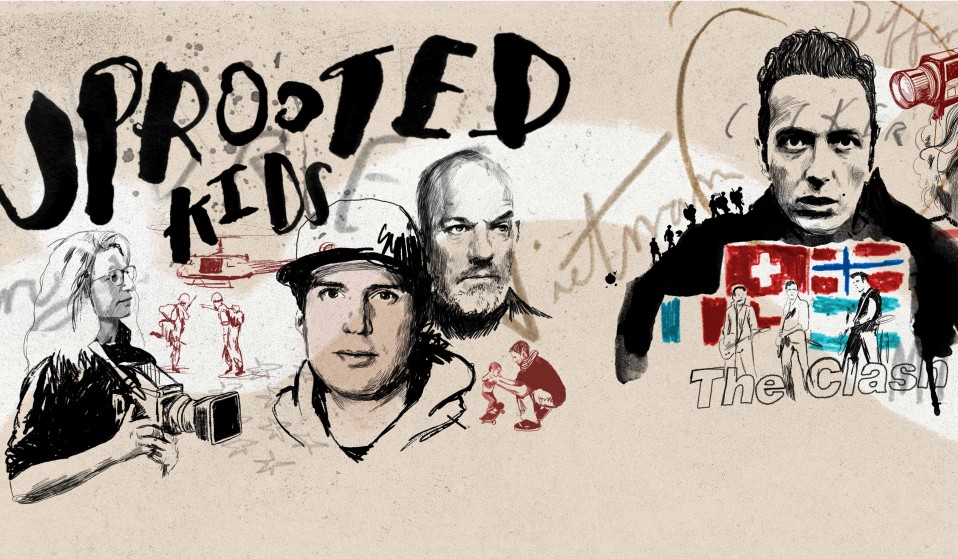 We meet the military brats who turned to art to express their mixed sense of roots. Featuring Joe Strummer, Peter Doherty and more.

We meet the military brats who turned to art to express their mixed sense of roots. Featuring Joe Strummer, Peter Doherty and more.

Military brats – children whose parents were in the military whilst they were growing up – often feel a perpetuating sense of loneliness that comes from a lack of concrete roots.

In Huck 48 – The Origins Issue, we met some military brats who turned to art and music to express this sense of loneliness. Music gives many young people who move around a lot a sense of independence; a voice that they wouldn’t have otherwise.

Founder of Brats Without Borders, filmmaker Donna Musil, believes that this sense of being an outsider breeds creativity: “Many of these kids don’t have a voice when they’re growing up,” she says. “I think there is a direct correlation [between creativity and nomadism] because when you move so much – and it’s more about the mobility, I think, than the military – it sparks curiosity.”

Here are a few military brats who’ve gone on to become iconic musicians.

Strummer’s father, Ronald Mellor, was a British Foreign Service diplomat. Strummer was born in Turkey, and spent parts of his early childhood in Cairo, Mexico City, and Bonn, before beginning boarding at the City of London Freemen’s School in Surrey at age nine. The Clash famously played their cover of ‘I Fought The Law’ in front of a wall of world flags in this video.

Doherty spent much of his youth at a number of army garrisons, due to his father’s work, living at various times at garrisons in Belfast, the north west of Germany, Dorset, and Cyprus. It was while in Dorset, at the age of 11, that Doherty was first inspired to play guitar. Doherty has often been inspired by military memorabilia, with The Libertines donning Welsh Guard’s jackets for the video for ‘Don’t Look Back Into The Sun’.

The Doors’ frontman spent his life moving across the US due to his father’s naval career. Morrison’s father, George Stephen Morrison, commanded the United States fleet during the Gulf of Tonkin Incident, which resulted in the United States’ rapid escalation of the Vietnam War. Morrison’s semi-nomadic lifestyle meant that he often moved school, but he was always drawn to literature, re-telling the Greek myth of Oedipus in ‘The End’.

Honus Honus’ (real name Ryan Kattner) grandfather was an airplane mechanic on a carrier in the South Pacific during WWII. His father served in the Air Force for over two decades, retiring as a Colonel. Honus says that being an Air Force brat imparted a restlessness that keeps him drifting, and an ability to adjust to whatever environment he is thrown into. Here’s ‘Steak Knives’, a song inspired by death.

Read the full article in Huck 48 – The Origins Issue. Grab it in the Huck Shop or subscribe today to make sure you don’t miss another issue.

Linkedin
RELATED ARTICLES
OTHER ARTICLES
A new book traces the legislation’s tumultuous history and the lasting impact its had on LGBTQ+ activism today.
As the role of the nuclear family is increasingly called into question, people are finding new ways to exist outside heterosexist norms.
With abuse of call-centre staff on the rise, many are now speaking out about the hostility they’ve faced.
The New York MC reflects on his experience with Trumpian US immigration policy, and how it impacted his career.
In the UK, Hongkongers are continuing to stand in solidarity with the pro-democracy movement.
Those set to be impacted by the governments ’undemocratic’ bill explain why it risks silencing them.