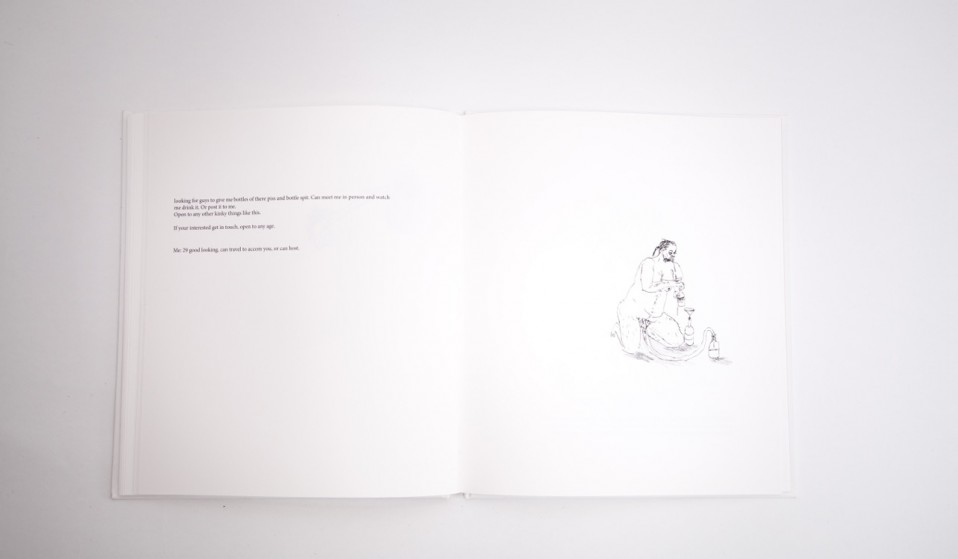 In '(no kissing)', Dominic Myatt turns the ads in one of the kinkiest corners of the internet into saucy drawings.

In '(no kissing)', Dominic Myatt turns the ads in one of the kinkiest corners of the internet into saucy drawings.

Dominic Myatt is an artist and tattooist by day and barista at a sex club by night, with a taste for the provocative. After he delighted us with a study of the “British beach body” by turning Dalston’s Ridley Road Market into an imaginary beach, he has now shifted his gaze to a particularly seedy corner of the internet: London’s Craigslist’s “m4m” (male for male) adverts.

His latest book, (no kissing), is a compilation of drawings based on ads he discovered on the messaging board, seeking fetishes, sex and all kinds of kinks. The board’s messages are full of surprises, as are Dominic’s re-interpretations of them.

Tell us the origin story for (no kissing): what inspired you to make this book?
I initially used Craigslist to sell things to make a bit of extra cash, used socks and things like that – I would never meet the person who bought them, I’d always post them – and since the ads where usually anonymous, I could only ever imagine what they might look like or what they might actually do with the objects once they received them. Using the Craigslist site led me to other anonymous ads that others had posted – I think it’s this anonymity that led me to use drawing to imagine and describe what might or might not happen in each scenario. 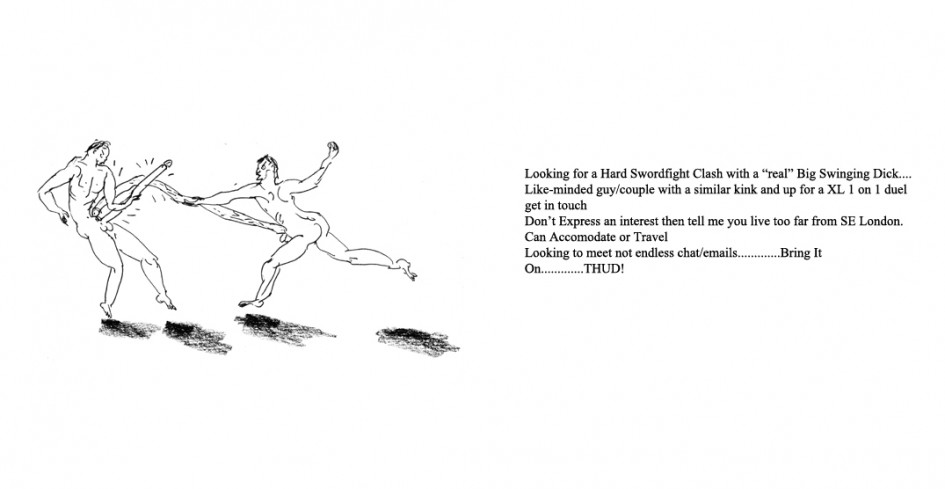 How would you describe the m4m Craigslist London universe, for those of us who don’t frequent it?
It’s a whole world of mostly anonymous ads describing men’s sexual desires. You can find absolutely anything there – ads ranging from fervid to frank, describing ways in which the poster would like to be used, abused or played with. Sometimes they are pretty mundane, perhaps a man asking for some intimate help in shaving his balls, but can also at time be quite macabre – such as an ad detailing how they like to be cannibalised.

Is there a message behind (no kissing)? What are you hoping the reader takes from it, if anything?
The title came from an ad, which didn’t make the final edit. The ad described lots of ways that the poster wanted to be touched but then ended with “(no kissing)”. I was really fascinated with the specificity of it and how personal it seemed.I want the book to try to break apart the stigma of shame attached to queer sexuality. 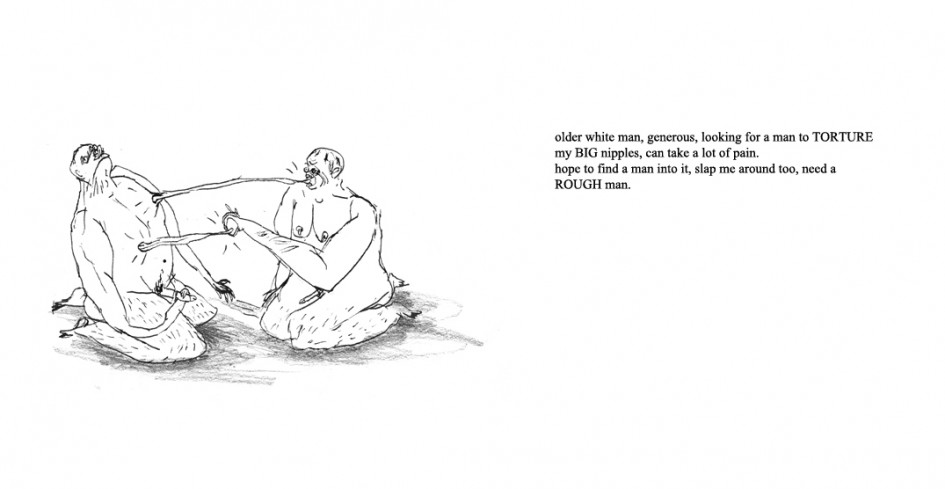 How did you approach re-appropriating the ads, and drawing them – in often hilarious ways?
It took many many hours or scrolling back and forth through the ads and walking through each scenario in my head to decide the best way to interpret the words. For instance, many ads where littered with typos, and sometimes you could perhaps tell that they were there because of the speed and urgency with which they had been written – or other ads might be structured quite formulaically, which made me think that the user published regularly and consistently. Things like this helped me work out the tone of each drawing.

I approached each drawing with a lot of humour as I think it is a great way to tackle things to do with sex and intimacy, especially when it has to do with queer bodies – which are largely a taboo topic in mainstream culture. 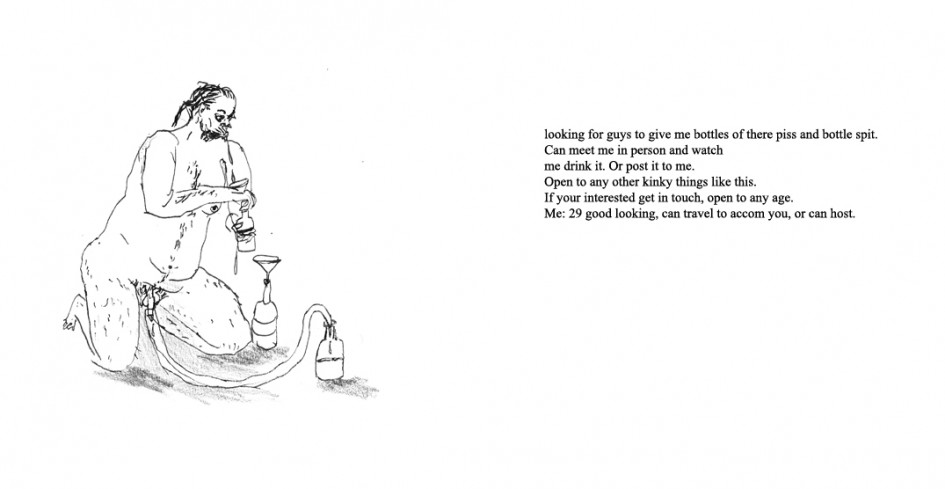 What was the most glorious ad you found for this project?
My favourite ad was one which was posted by a man who wanted to be “kept as livestock” and “used as a pig would be” – he ended the ad explaining that his “meat” would be “tasty”.

Could you talk about why you’re interested in themes of sexuality and the human body?
Sexuality and the human body are universally understood things – it’s only perhaps the ways in which they are understood which differ from person to person. Bataille’s book Erotism is something that informs a lot of my ideas, especially his ideas on the connection between sex and death – another theme that flows through a lot of my work. 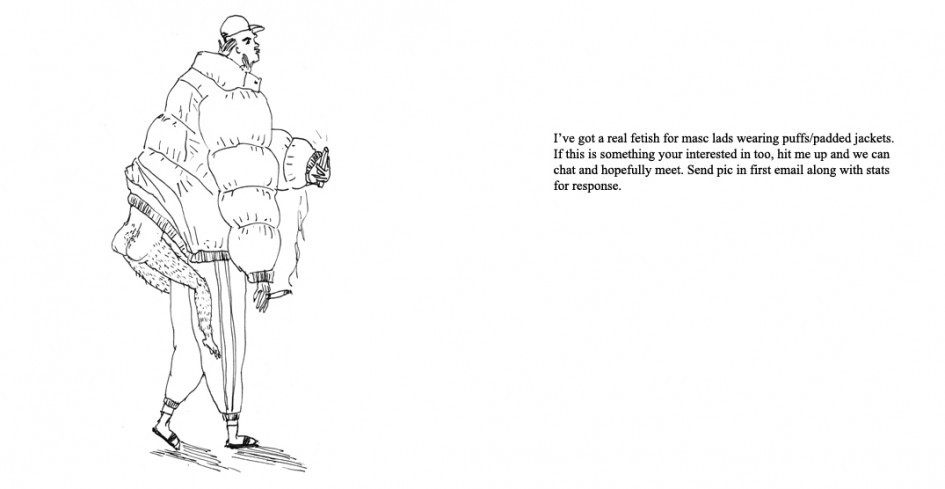 Tell us about your other job as tattooist.
I would say that tattooing is more of an extension of my work rather than a distinct job. I only tattoo work that I’ve created myself so in that way the skin becomes a kind of substrate for my ideas. The skin changes and stretches with age and the tattoo fades eventually. It’s becomes more than just a superficial mark. There is something really special about that and I feel very privileged to have been able to tattoo people with my work

Are you still working at a sex club in Fitzrovia? Is that good research?
I’m still working there part-time. You see a lot of people having a lot of sex – in that sense, it is great visual research and talking to people over the bar you often get to know a bit about them and the reasons why they are there. You begin to understand the different roles that sex plays in people’s lives and how that connects to their identity. It can be quite dark at times, but also quite refreshing to talk with people so openly.

What other artists inspire you right now?
Ken Kagami and David Shrigley in particular. 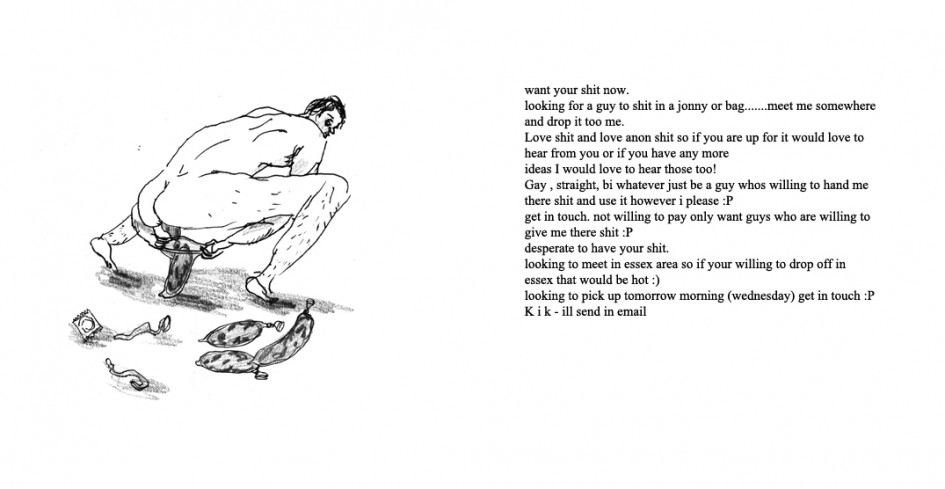 What’s next for you?
I’m working toward a few exhibitions this year and some really exciting collaborations with photographers and animators. I’m also working on a larger project with COMMUNE EAST toward the end of year which I’m really looking forward to.

Find out more about Dominic Myatt’s work. (no kissing) will be launched at London’s Hoi Polloi on 23 March.

Linkedin
RELATED ARTICLES
OTHER ARTICLES
Photographer Robin Graubard’s debut book offers an unflinching record of turbulence and change across the Balkans.
In the last of our dispatches from OFFF Barcelona, Rufus Deuchler and Vincent Gault discuss the future of creative process.
In our first OFFF Dispatch piece, the Arce Studio founder shares her tips on standing out from the crowd.
New legislation is set to make it more difficult to hold Israel accountable for its human rights abuses.
After news broke last week around an expected reversal of the 1973 landmark law that made abortion legal in the US, protestors gathered in the UK in support of American women.
Members of the collective share some of their reasons to run as part of #UnitedBySummits, a campaign that looks to uncover transformative power of the outdoors.