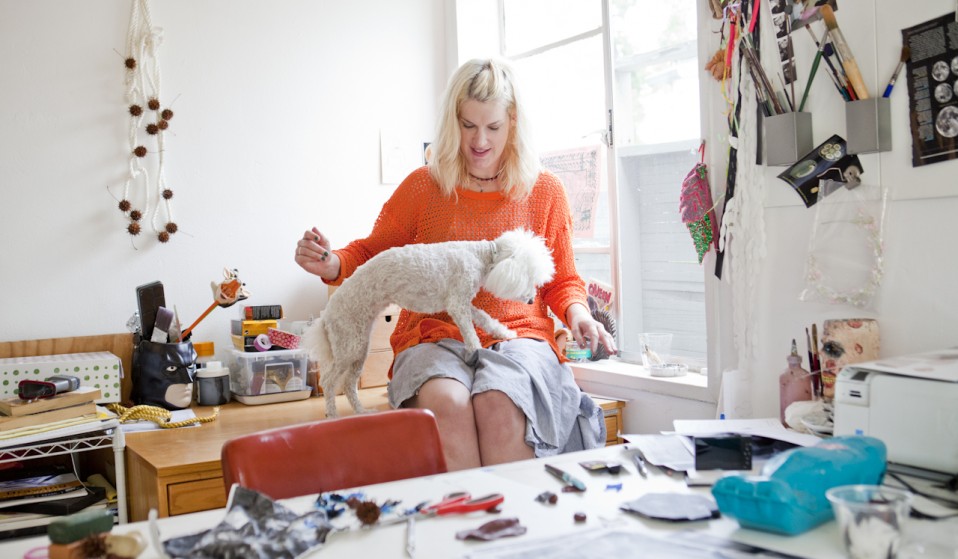 “Route 9 may well have sparked my fascination with opposite ends of the spectrum.”

“Route 9 may well have sparked my fascination with opposite ends of the spectrum.”

“I’m interested in the elements of duality in female sexuality in a way where it’s both beautiful and disgusting at the same time,” says LA artist Ashley Macomber, sitting in her North Hollywood studio with her poodle mutt from the pound, Fran. “In the modern world, it’s fascinating how there’s equality in certain ways, more so than ever before, while at the same time there are fake eyelashes and fake faces and hair extensions. It’s so grotesque to me physically, and I am trying to figure out why that is.”

Macomber makes delicately textured renderings of feminine forms and animals, in dusty balletic hues, underwear pinks, creams and lacy blacks. Except for a book collaboration she did with musician Bonnie Prince Billy in 2012 (Afternoon, Black Tent Press), she never puts men in her art; just femme subjects who almost always exist in contrast, juxtaposed against bricks, their softness hidden behind masks, or bound by ropes. In Macomber’s world, womanhood must always contend with something menacing and impersonal. 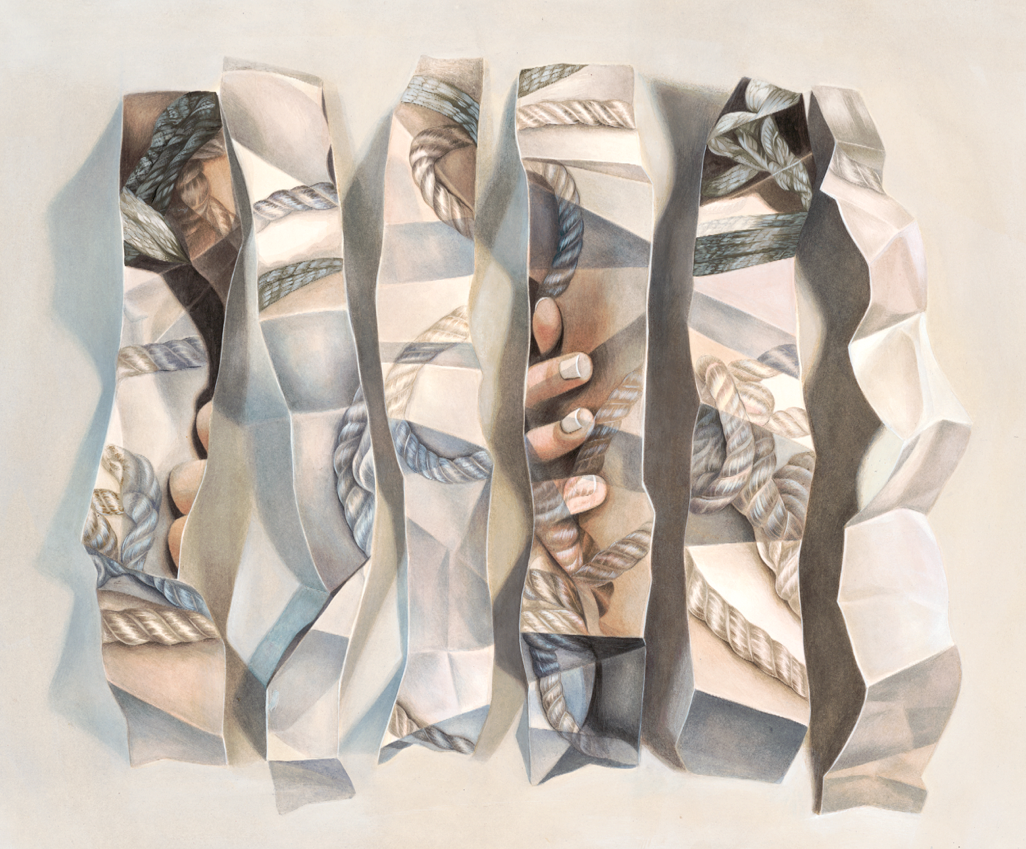 From her studio in her house in North Hollywood – when she’s not working part-time as an assistant to another artist – Macomber makes paintings that explore these two currents of female sexuality existing side by side. And the layers and transparencies in her work reflect the grey areas when it comes to the “extreme freedom and extreme objectification women can experience at the same time”.

Originally from the East Coast, Ashley grew up in a small upper middle class town called Southborough in Massachusetts. “We had this really lovely house, but just 600 feet away was a highway, which I think is always really funny,” she says. The contrast between the white-picket fence idyll of her family home and the thundering carriageway that rumbled next to it may, she suspects, have informed her entire perspective as an artist, that acute awareness of how beauty and beast can exist side by side. “Route 9 may well have sparked my fascination with opposite ends of the spectrum,” she muses.

Her family is well-off, businesspeople, and didn’t know what to make of Ashley’s interest in visual art at first. They wanted her to be a Scottish dancer, and dancing, especially ballet was “her jam” until her junior year of high school when some of her friends started talking about art school, and Macomber decided to apply, too. “My mother was not super keen on the idea because she thought I was having a fleeting moment,” she says. “I would drive myself to all these classes after school and on the weekend so I could apply to college.”

She studied fine art at RISD in Rhode Island (Shepard Fairey’s alma mater) and after a few years in New York Macomber moved to LA in 2002 with her boyfriend and best friend. It wasn’t long before the city and its dynamics started to inform her work. “It all started when I was driving down Sunset Blvd at 4pm and feeling amazed, looking at these young women basically wearing no clothes,” she says. “I am so fascinated by it. I was driving up Cahuenga Blvd and there was this woman crying sitting on the ground outside Popeye’s Chicken, and she wasn’t wearing a dress – she was just wearing Spanx. At the same time I am a woman and I’m affected by those pressures too – I have makeup and I worry about my weight and my face and getting older and I am concerned if my hair looks pretty. That’s what’s super interesting about this. It’s not like I can just objectively look at it as this strange duality that has nothing to do with me. I am completely enmeshed in it.” 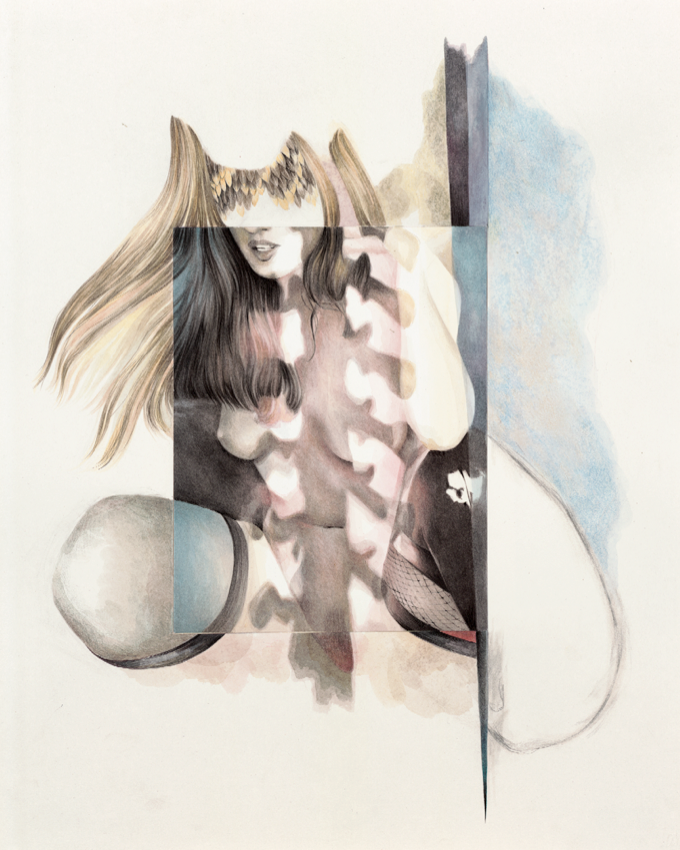 Macomber exists in the broad extended family of Los Angeles painters, writers, photographers, graphic designers, musicians, gallerists, vandals and oddballs that sprouted from California’s skate, surf, graffiti and art culture. Brought together to experience various moments in the LA cultural timeline together – like Shepard Fairey’s now defunct but iconic Swindle magazine (2004 – 2009), which saw Fairey and Swindle co-founder Roger Gastman gather a cabal of loosely-knit writers and artists, spawning a million new collaborations – and THIS gallery in LA’s Highland Park neighbourhood, a three-and-a-half year project birthed by photographers Claire and Jeremy Weiss (aka Day 19), Aaron Farley, Dan Monick, and graphic artist Justin Van Hoy. Each year they would host a show, These Friends, to showcase the work of their extended family, including Ed Templeton, Cali Dewitt, Emily Shur and others. In 2012, shortly before his tragic and unexpected death, THIS gallery co-founder Van Hoy immortalised that family in his coffee-table book Milk and Honey (AMMO books), a tender homage to this band of Golden State artists. Macomber was one of them.

“I feel like the book is this moment in time about all of his friends and this group of people, and now it’s more in his memory,” says Macomber. “But that’s the thing about people in LA, like Justin Van Hoy and Day 19, who champion their friends and work really hard and make all these things happen. They are the community creators. The community of people who are in that book are not from the grad school scene, they are just all interconnected because they are friends. Everybody knows each other – I think that is a really important part of that experience – and everyone champions each other.”

It’s not a dynamic that occurs in all cities. These birds of a feather flocking together and cruising along, too mellow to compete in the way artists do with one another in other cities. A sense of the greater good pervades in Macomber’s LA world. “I think that in LA everyone just sort of helps everybody else up. Even with this interview – Ed [Templeton] has been my friend for a really long time and every time he can, he helps me. Because not only is he my good friend, but also he really likes the work that I make, which I super appreciate. I can look back at every single moment in my career and it’s all related to someone I cared about. A friend suggesting my name to someone else.”

“In a certain environment you can look at that with a sort of negative or sarcastic eye and think, ‘It’s all about who you know.’ But I don’t think that’s fair, I think it’s so much more positive than that. It’s about people that are likeminded that respect each other’s work. That is a really specific part of Los Angeles. I’ve heard this idea of the positivity crew where everybody is really positive and happy and LA gets framed as, ‘Yeah man, we’re all just in it for each other,’ and it’s not as silly as that. It’s just supportive.”

Land of milk and honey indeed. 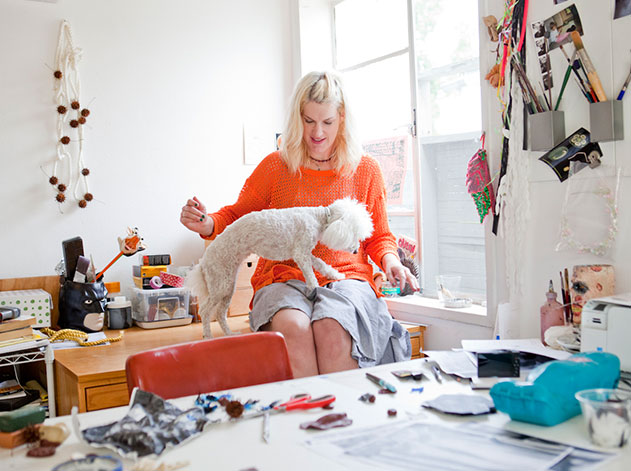 Linkedin
OTHER ARTICLES
“I just ate hot shit. I bombed so hard. And then I kept bombing for three years.”
The rad visionary behind Habitat skateboards Joe Castrucci launches an Etsy store and shares his artistic inspirations.
Prolific graphic artist Jean Jullien shares some of his inspirations before the opening of his solo exhibition La Plage at Beach London.