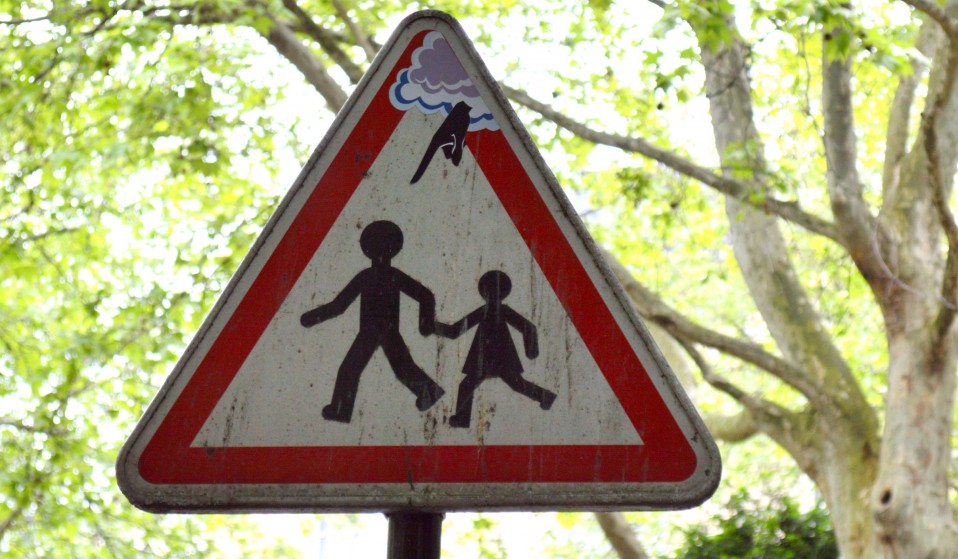 This is all the handiwork of Clet Abraham, a French painter and sculptor who has been changing signs not only in Florence, but cities such across Europe, as well as New York City in the US and Osaka in Japan. He places specially designed stickers on his street canvases so as to make them amusing and provocative, but not distract from their original purpose.

Abraham’s street signs are rooted in an idea of “artistic lecture” to the contradictions of Florence, though he admits that he doesn’t come from the tradition of street art. That may be a reason why Abraham has collaborated with authorities on projects before, but that isn’t to say he’s accepted in other places – his girlfriend was arrested for vandalism and breaking road traffic laws in Japan, he says as a part of a ruse to get at him.

Did you do any street art before starting to work on street signs five years ago?
Before street signs I always had a close relationship with the street but not in the modern sense of “street artist”. I’m not part of the “street art” culture. I come from a personal and independent research. I think that an artist has to invent its own original language but I don’t have any problem to include my works in the category “street art”. 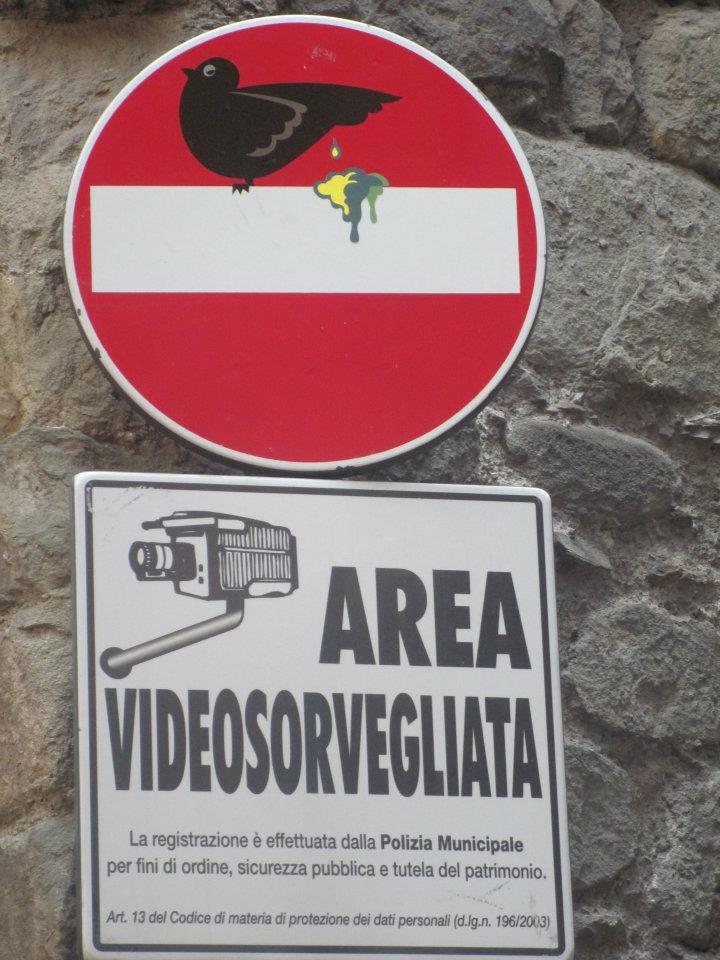 What was your initial motivation to work on street signage in Florence?
Road signs are a contradiction for Florence, an anomaly. The city has historically been really closed off and it doesn’t tolerate invasion without control, using the pretext of ‘aesthetic respect’ – but it’s full of road signs. This is not very respectful. I have given the signs an artistic lecture, now they have a cultural level, like Florence pretends to. 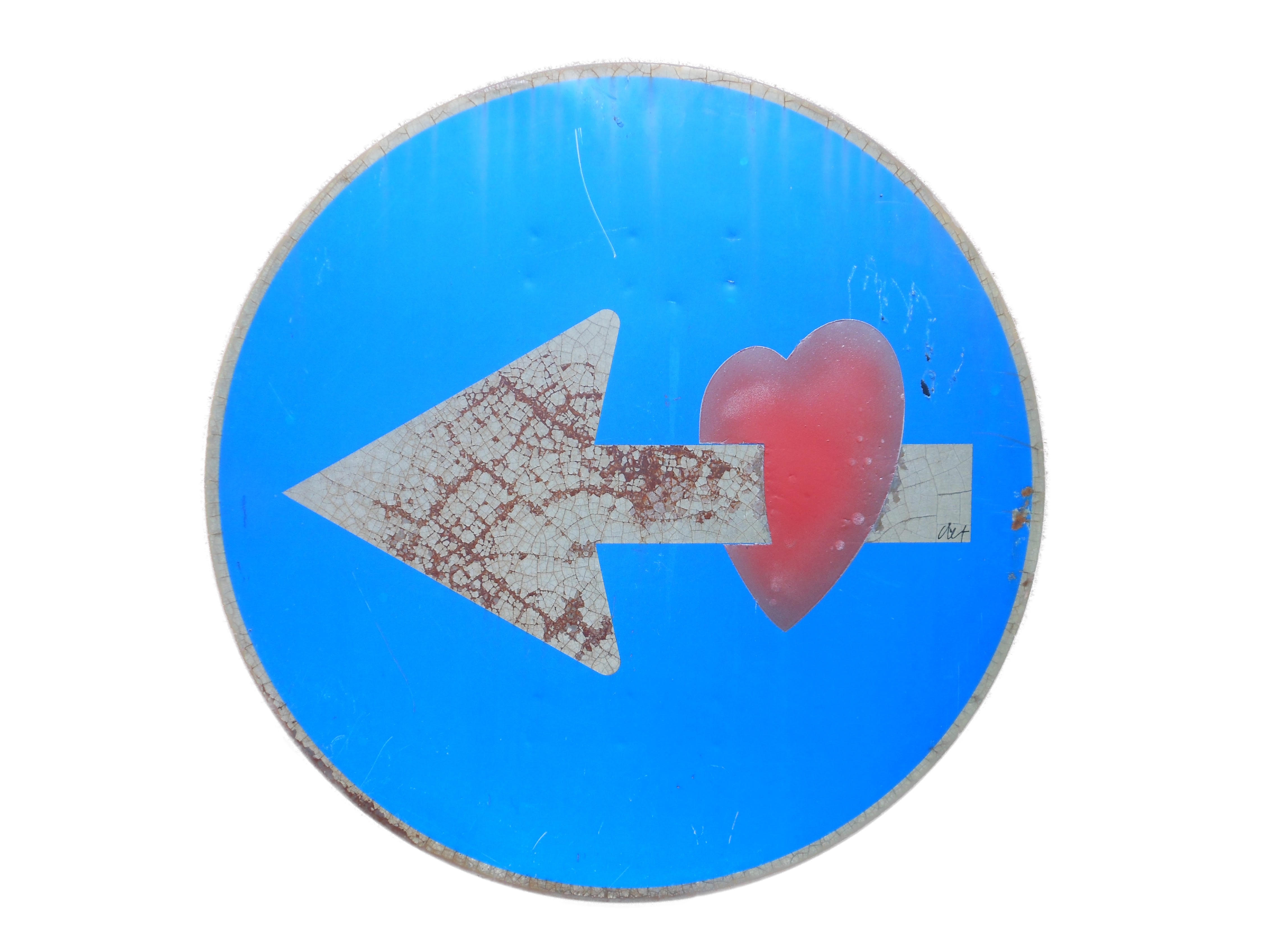 How did you move into other cities, and how does working in some of those cities differ between each other, both artistically and legally?
Europe is generally similar but it depends on the local authority. My work is like a barometer – it is questioning the principle of obedience. Where the authority or the power has some auto-criticism, my work remains, if not it disappears. The most violent and close-minded reaction came from Japan. In Europe I had some trouble in Brest (France) and Pistoia (Italy). 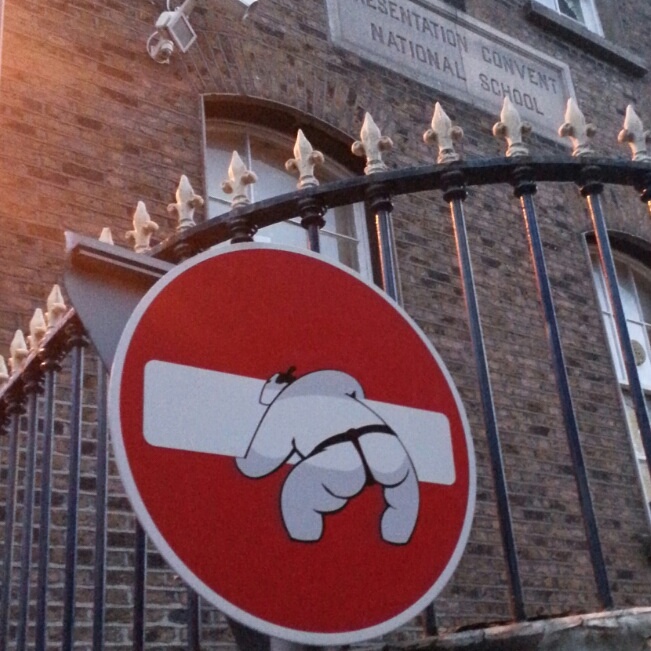 You have collaborated before, notably for International Women’s Day in Tuscany. How does working with authorities compare to doing your street work covertly on your own?
I always search for dialogue. My work is a critique and it is provocative but also constructive and offers an alternative to the imposition, a more harmonious relationship. I’m happy when institutions recognise the constructive character, but the places where I’m countered are many. There’s still much space for autonomous and free provocation. 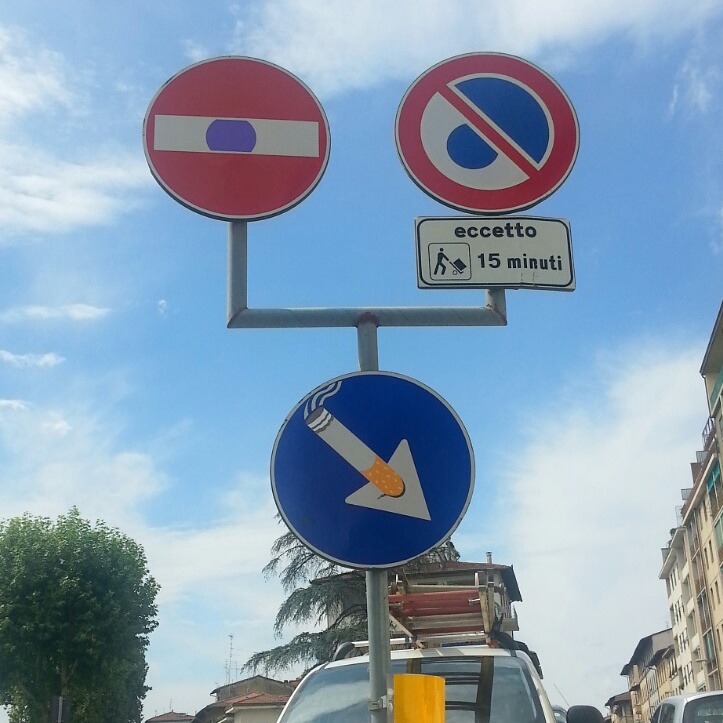 Quite a few of your works reference religion. Does your use of the canvas of street signs make a wider point about societal ‘order’?
Religion has influenced society for centuries. An atheist too behaves according to rules once religious; talking about religion is like talking about rules of our society. Bringing these arguments to road sings is like give back a human and simple dimension, which is alien to religious dogma.

Your girlfriend was arrested in Osaka for vandalism. What is her current situation and have you found yourself in a similar dilemma?
I worked on road signs in Osaka and Kyoto and my girlfriend (who has Japanese origins) only made the mistake of coming with me. I returned to Italy and she stayed there for a few more days on holiday, then she was arrested and detained for six months. She was interrogated for two months and underwent severe psychological torture. 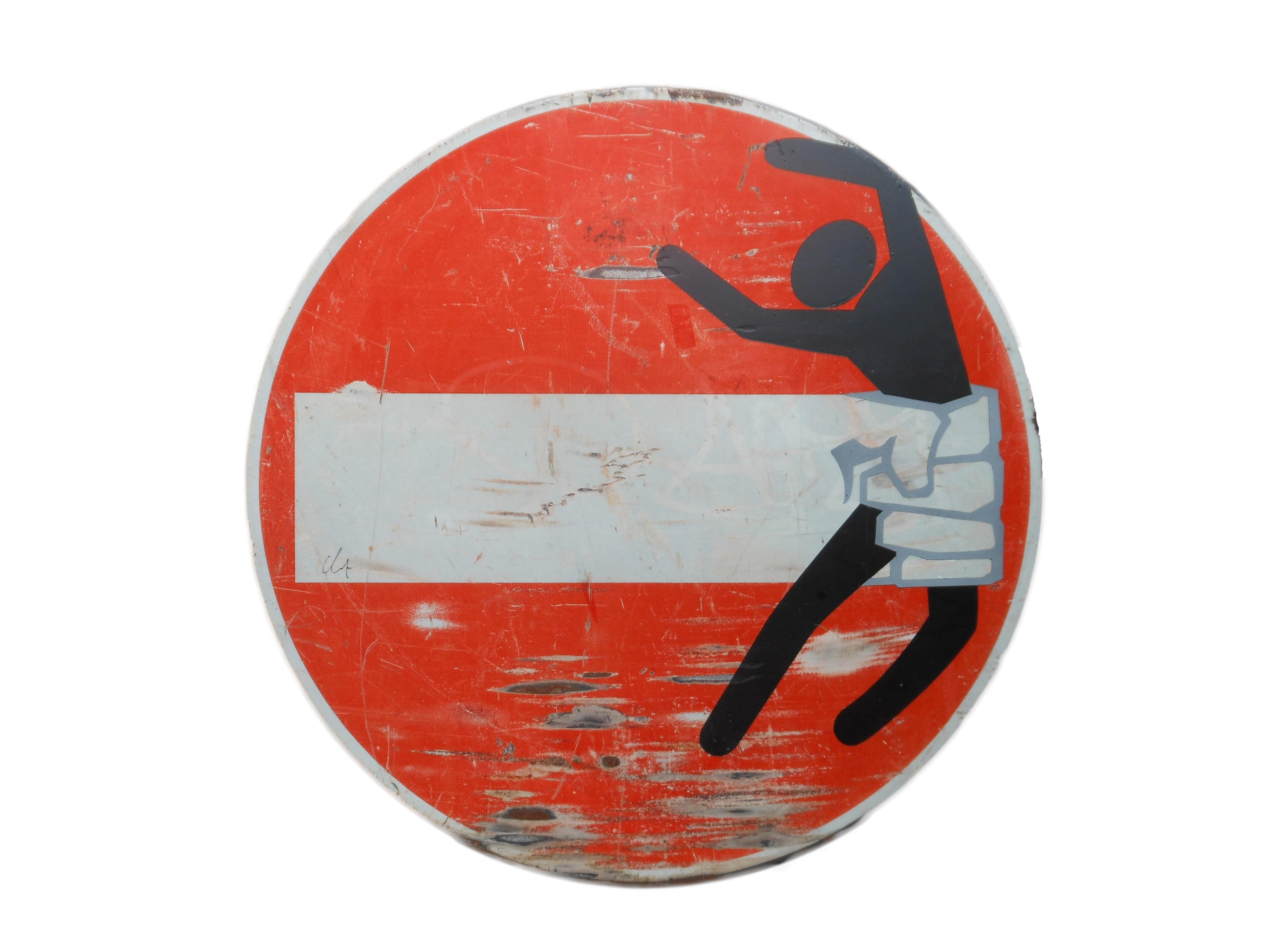 The objective of the police, in addition making us pay for the insult, was to put pressure on her to get me back and arrest me or to attempt to build a case that would give her more responsibility. She resisted! She was very brave. I can’t go back there. I’ve never had similar problems before. Japan is a police state hiding behind an apparent democracy. 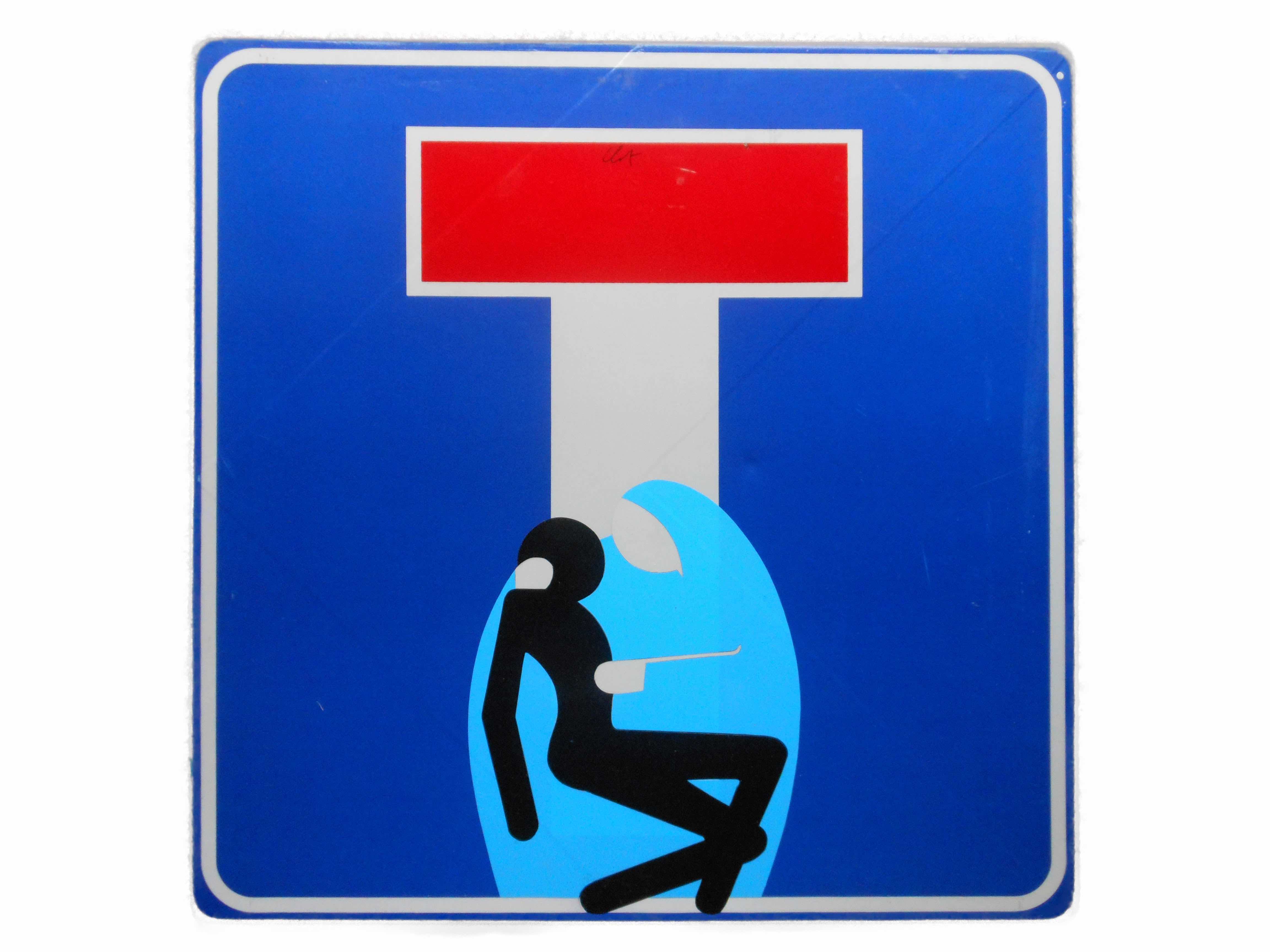 Do you have a particular favourite out of the signs that you’ve changed?
Generally, I like access denied because it’s the visual symbol for excellence of the authority that imposes without possibility of discussion. I love to answer to this authority with the irony of my stickers. 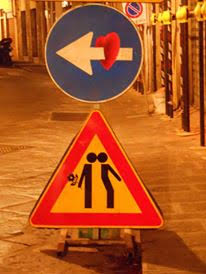 Check out more of Clet Abraham’s work. His signs will be on sale at Moniker Art Fair at The Old Truman Brewert this year from 15th-18th October.

Linkedin
RELATED ARTICLES
OTHER ARTICLES
Street artist Bleeps.gr was making street art long before the economic crisis hit Greece. But with the social and cultural impact of the nation's turmoil, his art has reflected the changing views of the dissatisfied voices he comes into contact with. His identity is anonymous, but he won't stay quiet.
Great public art challenges authority and forces us to rethink our relationship with the world around us, says Claire Doherty, author of Public Art (Now).
One of France's more mysterious culture jammers OaKoAK gives Huck a rare interview.