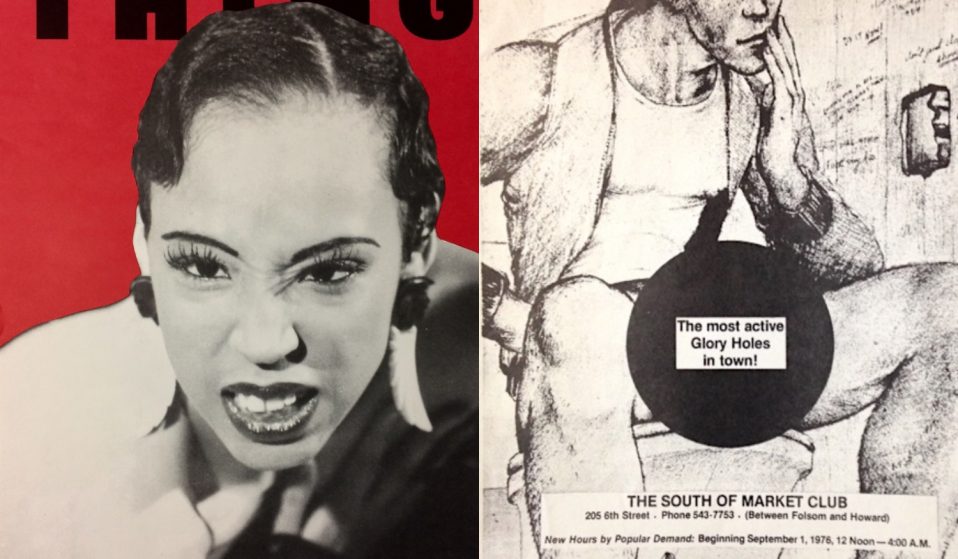 ‘Society had turned its back on us, which added to our creative flow and ability to live freely. It’s easy to tell the world to go fuck itself when you’re dying.’

‘Society had turned its back on us, which added to our creative flow and ability to live freely. It’s easy to tell the world to go fuck itself when you’re dying.’

“Like everything to do with AIDS, I didn’t set out to become any of the things that would eventually define my life,” says Greg Ellis, archivist, curator and creator of Ward 5B, which takes its name from the first AIDS ward in the world, established at San Francisco General Hospital in 1983.

Growing up in the notorious Tenderloin neighbourhood of San Francisco, Ellis saw the effects of heroin on family and friends — as well as the early cases of AIDS spreading among intravenous drug users (IVDUs).

In 1986, Ellis and a friend moved into an old Salvation Army building in SoMA, a San Francisco neighbourhood long known for its history of radical queer sex clubs and working-class community.

After suspecting contaminated syringes were causing seroconversions, Ellis met with a local pornographer that supplied cases of fresh syringes at a time when it was illegal to obtain new needles without a doctor’s prescription in California. From this stroke of genius, the Needle Exchange Program was born. 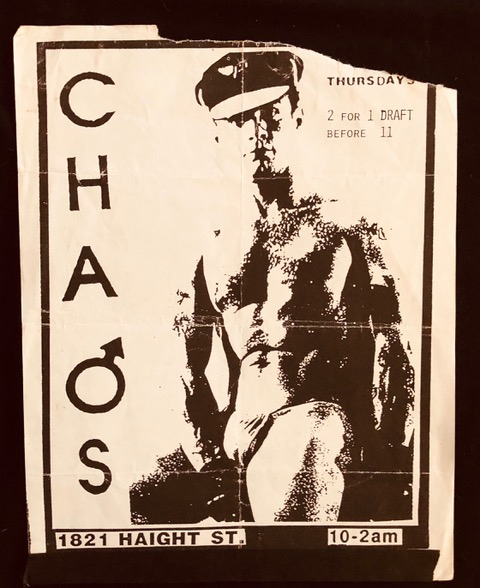 “All the bars in town, at least the ones I like, are fronts for heretical sects.” –Steve Abbott, The Lizard Club.

“We began giving out free harm reduction kits consisting of cotton, one oz. bottles of bleach, syringes and condoms,” Ellis remembers. “They were humble beginnings, but would eventually branch out onto the streets and our efforts eventually were recognised San Francisco Mayors Art Agnos and Frank Jordan.”

“Our entire way of living in the world was predicated upon the assumption that we were on our own, that the government didn’t give a shit about us. We were right, as it turns out.”

Embracing the DIY ethos of punk, these early AIDS activists set out to use art as an integral tool to build, educate, and support the community during the early stages of the pandemic that would eventually claim 30 million lives worldwide.

“Art helped many of us transcend the trauma and disassociation that set in during the plague years,” Ellis says. “It offered psychological sustenance, provided emotional context and informed our relationship with death. Art gave us a sense of the sacred.”

“We knew we were living through historical times. None of us thought we’d make it out alive. Our outrage at the society that had turned their backs on us, added to the creative flow and ability to live freely. It’s easy to tell the world to go fuck itself when you’re dying.” 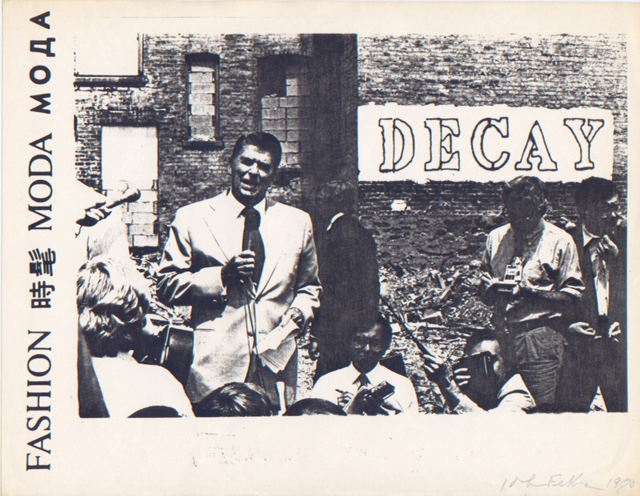 In 1980, John Fekner stenciled the words Broken Promises, Falsas Promesas, Decay,
Broken Treaties and Last Hope on the walls and buildings of the decaying South Bronx, drawing attention to the inhumane living conditions of the area residents. This piece printed
in conjunction with the South Bronx radical arts space Fashion Moda, includes the infamous
photograph of Reagan with Fekner’s stencil on the burned out building behind him. 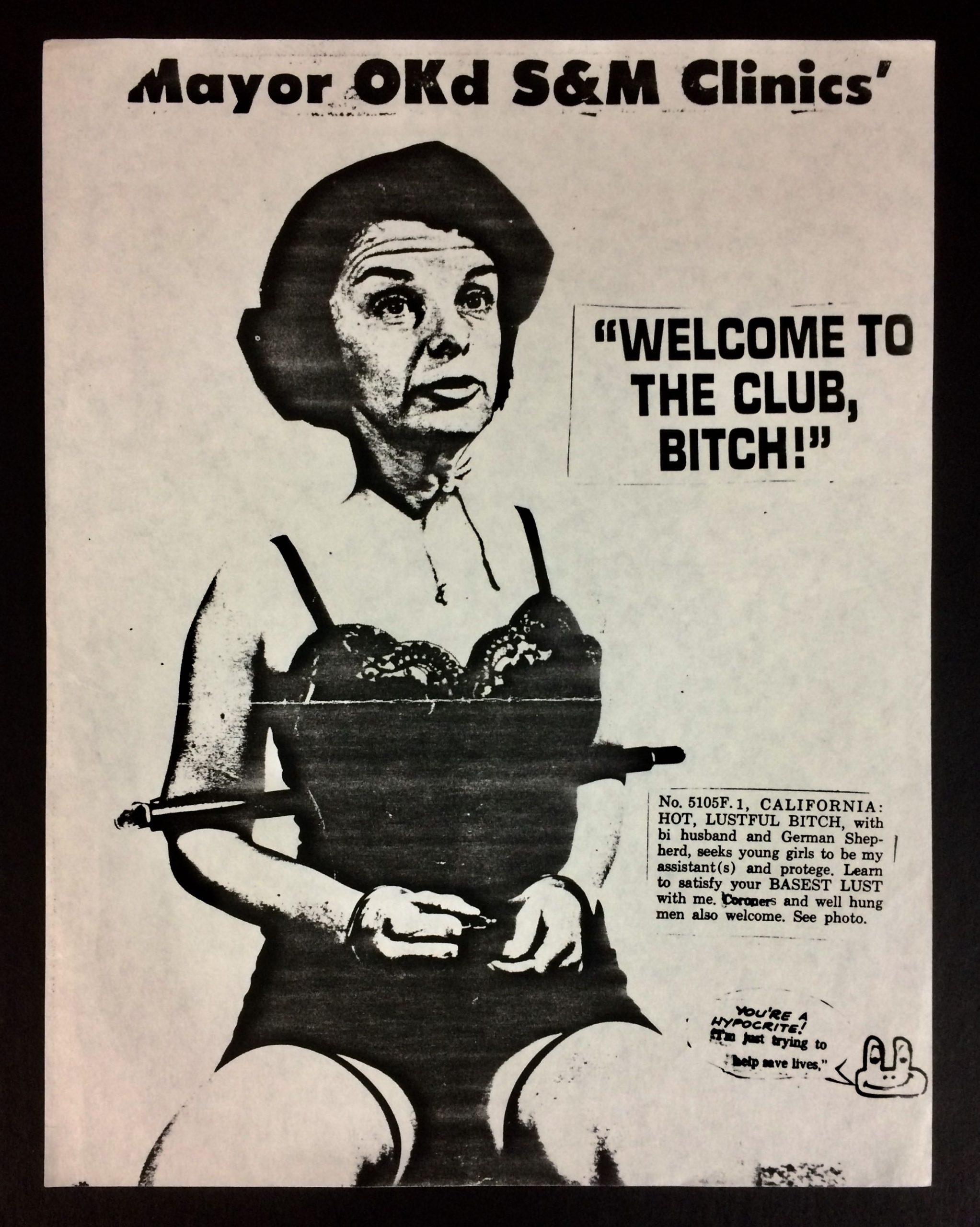 In 1984 Mayor Diane Feinstein declared the first Aids Awareness Week. The following year, as seen in this flier, she did not win over any supporters in the radical sex communities with her decision to forge ahead with bathhouse closure, which resulted in the targeting of all of the city’s sex establishments. It was rightfully viewed by many as a cynical move on the part of City Hall to align itself with corporate interests, forever altering the Tenderloin and SoMA neighbourhoods, and effectively erasing another queer enclave. 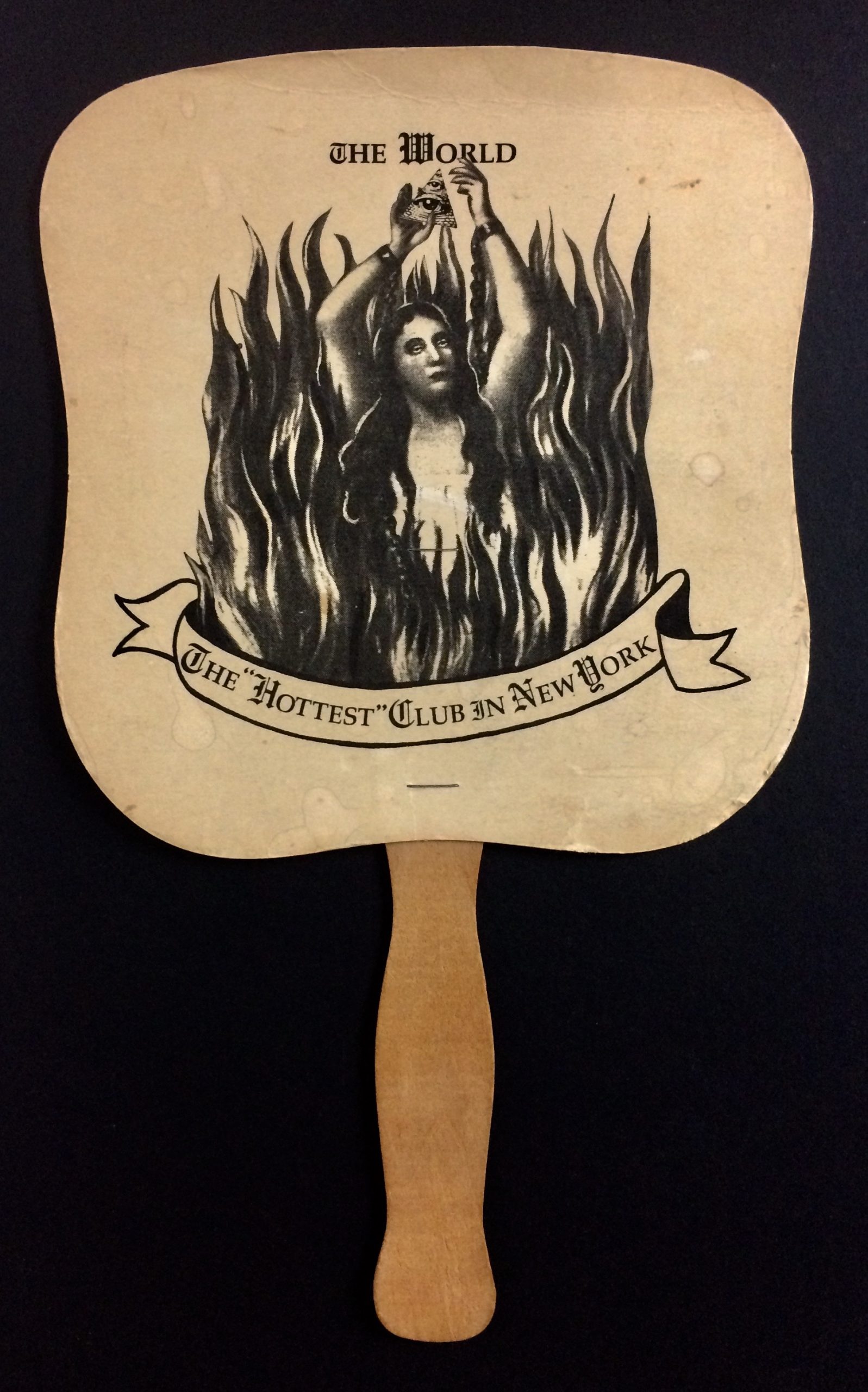 There are a few nightclubs created for those who run all of the other trendy spots in NYC. The World on the Lower East Side was one such establishment. It was the type of place where legendary doorman and club promoter Houai Montaug cooled his heels. 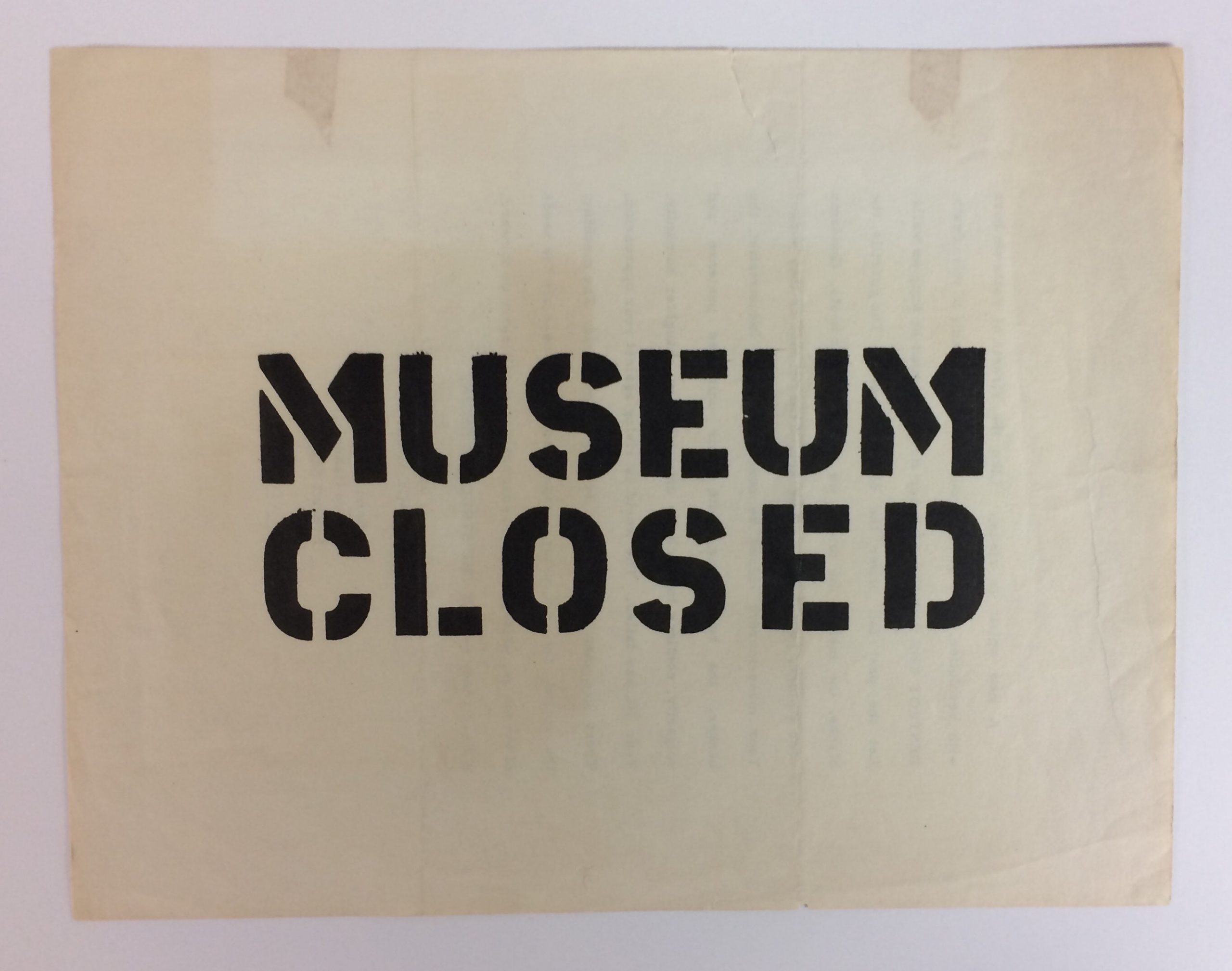 Plenty of New York art world figures have taken umbrage with MoMA over the decades, but
the artist Ben Morea may be the only one who actually managed to shut it down. “They had
the entrance of the museum barricaded, with cops behind it,” Morea told the New York
Times of the day in 1966 when his manifesto targeting the staid arts institution as one of the
objects of a “total revolution, cultural as well as political and social,” persuaded nervous
museum staff members to bar the doors pre-emptively. This is the flyer with the printed
manifesto he taped to MoMA’s door, simply reading: MUSEUM CLOSED. 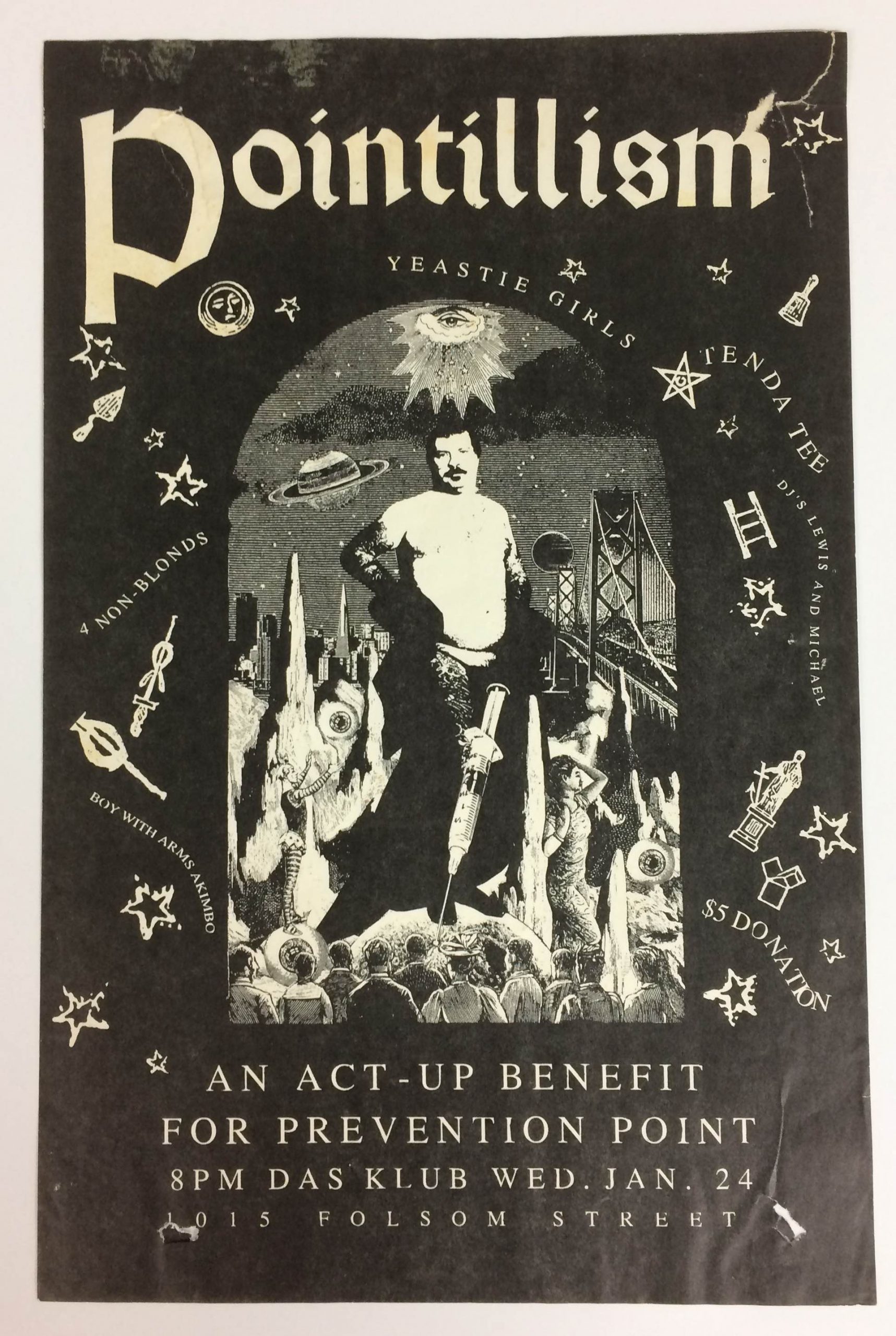 “All the bars in town, at least the ones I like, are fronts for heretical sects.” – Steve Abbott, The Lizard Club. 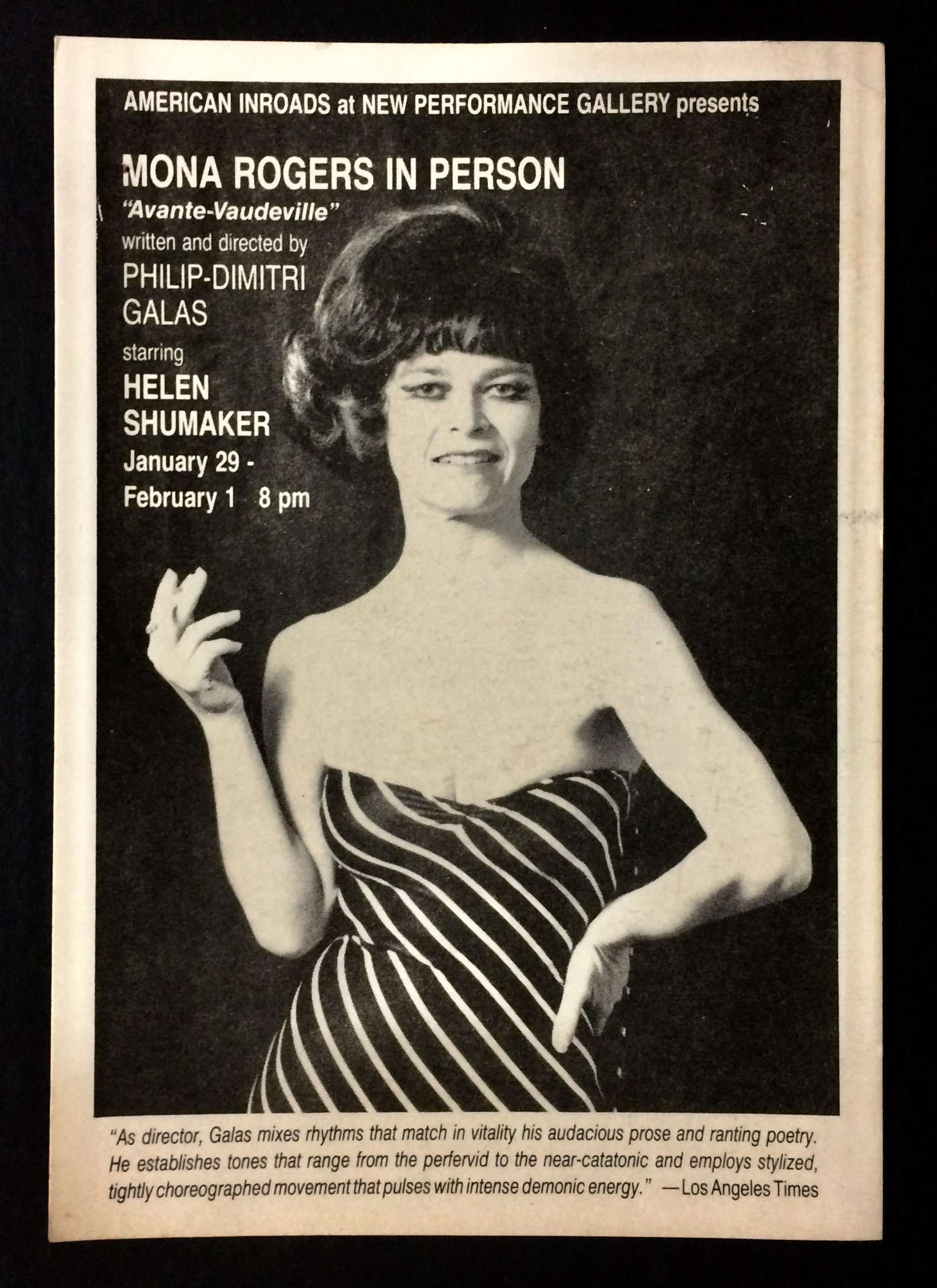 Philip-Dimitri Galas was a playwright, a performance artist (which he disliked being labelled), a novelist, a visual artist, and a genius. He died from PCP pneumonia in 1986. 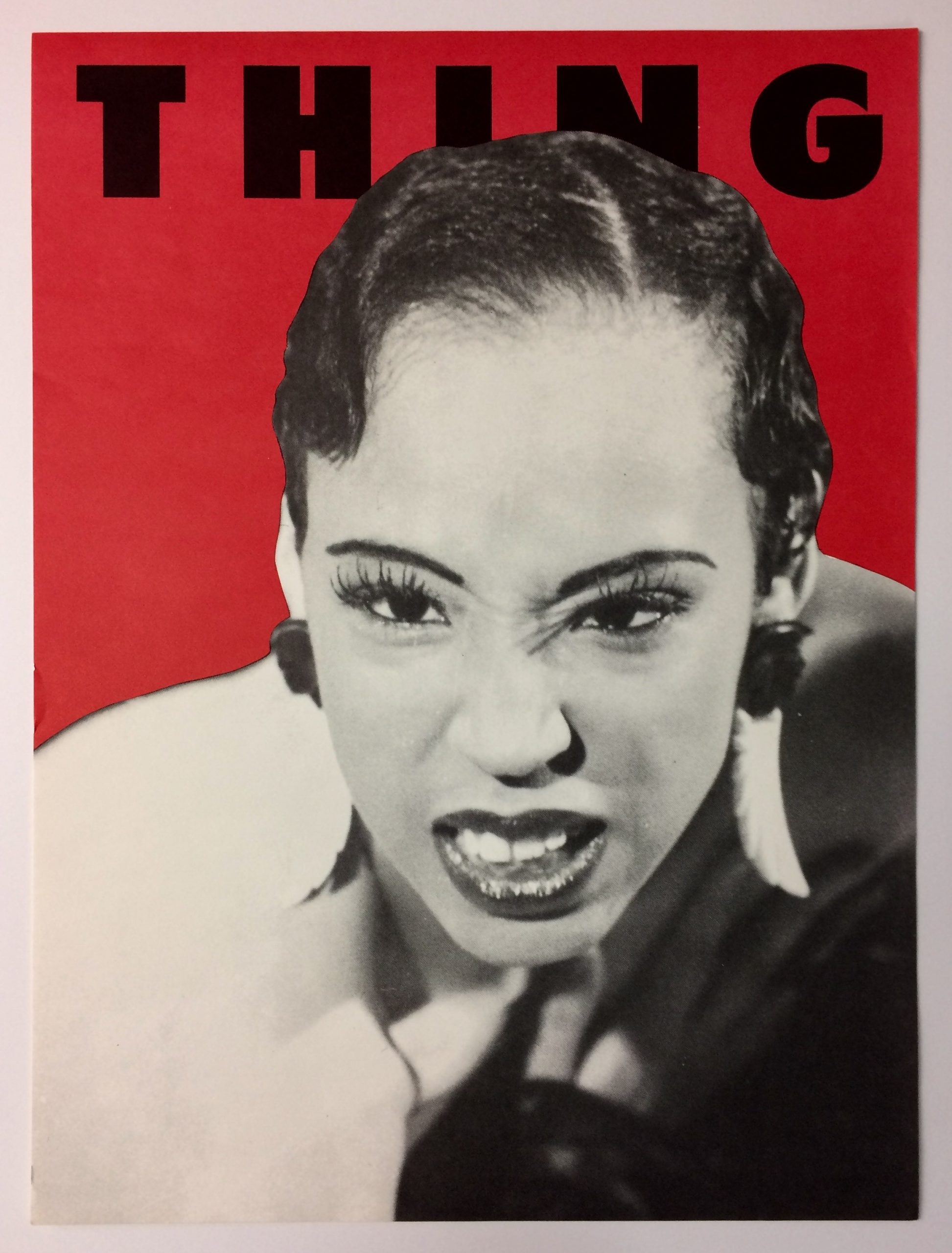 Robert T. Ford, the publisher and co-editor of Thing Magazine, a black and queer arts publication, wrote a five-part series of articles, “Life During Wartime,” that documented his personal struggle with HIV/AIDS. Ford died of an AIDS-related illness in 1994. 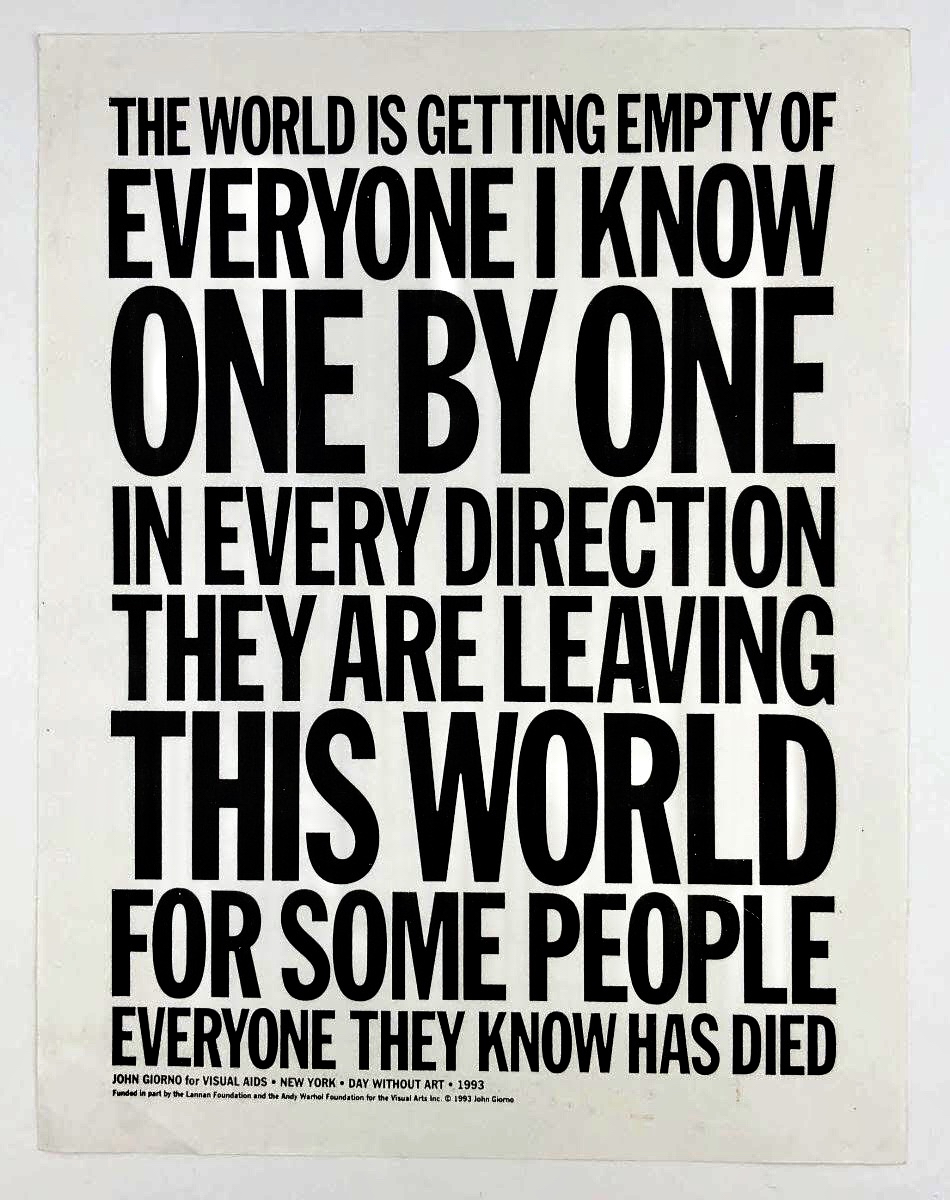 This is a photocopied flyer by John Giorno published by Visual Aids on the occasion of the 1993 instalment of a Day Without Art. Giorno was a longtime advocate for those with AIDS. For over two decades from 1983 onwards, Giorno Poetry Systems made emergency grants to those who fell ill, proving a lifeline during the crisis. 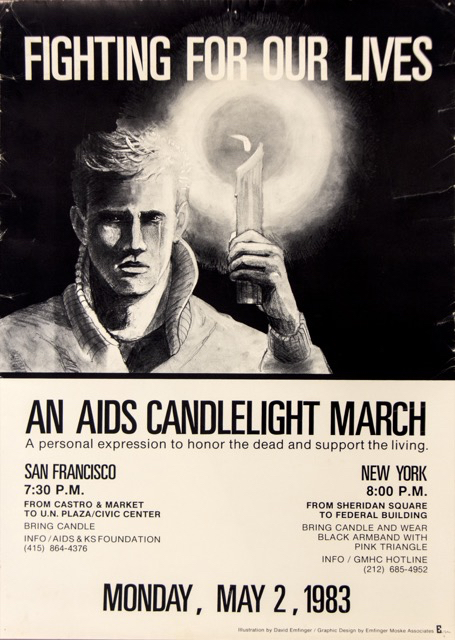 The first AIDS Candlelight Memorial March took place on May 2, 1983, simultaneously winding its way through the gritty streets of Greenwich Village in NYC and the Castro District in San Francisco. 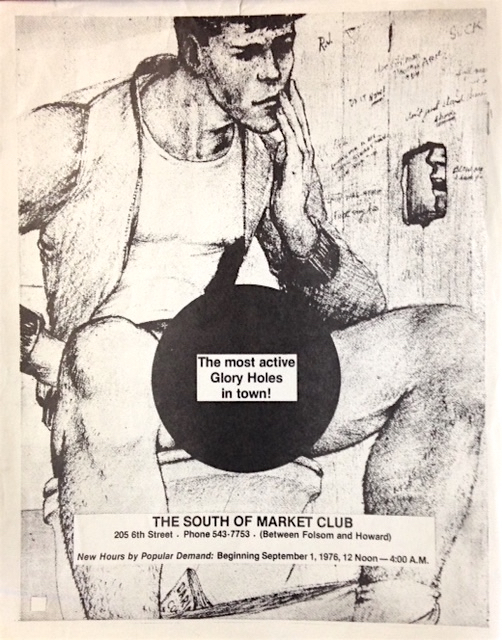 The glory hole in gay male culture has taken on an almost religious or mystical quality. The legendary South of Market Club in San Francisco had these flyers wheat-pasted (with the blackened hole cut out) around the glory holes in their establishment. The practice of going to the baths and sex clubs was often referred to by many gay men as going to “church”, so intense was the experience. 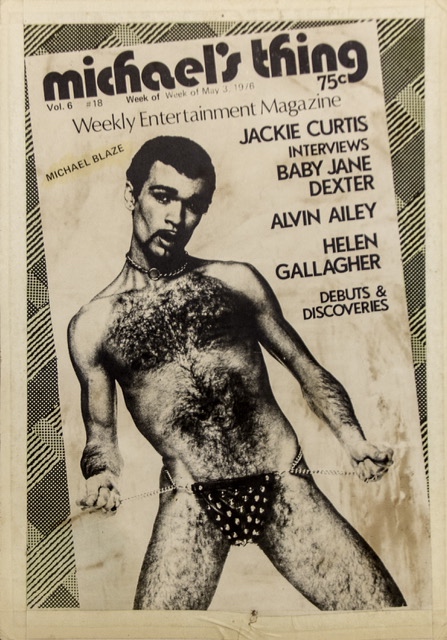 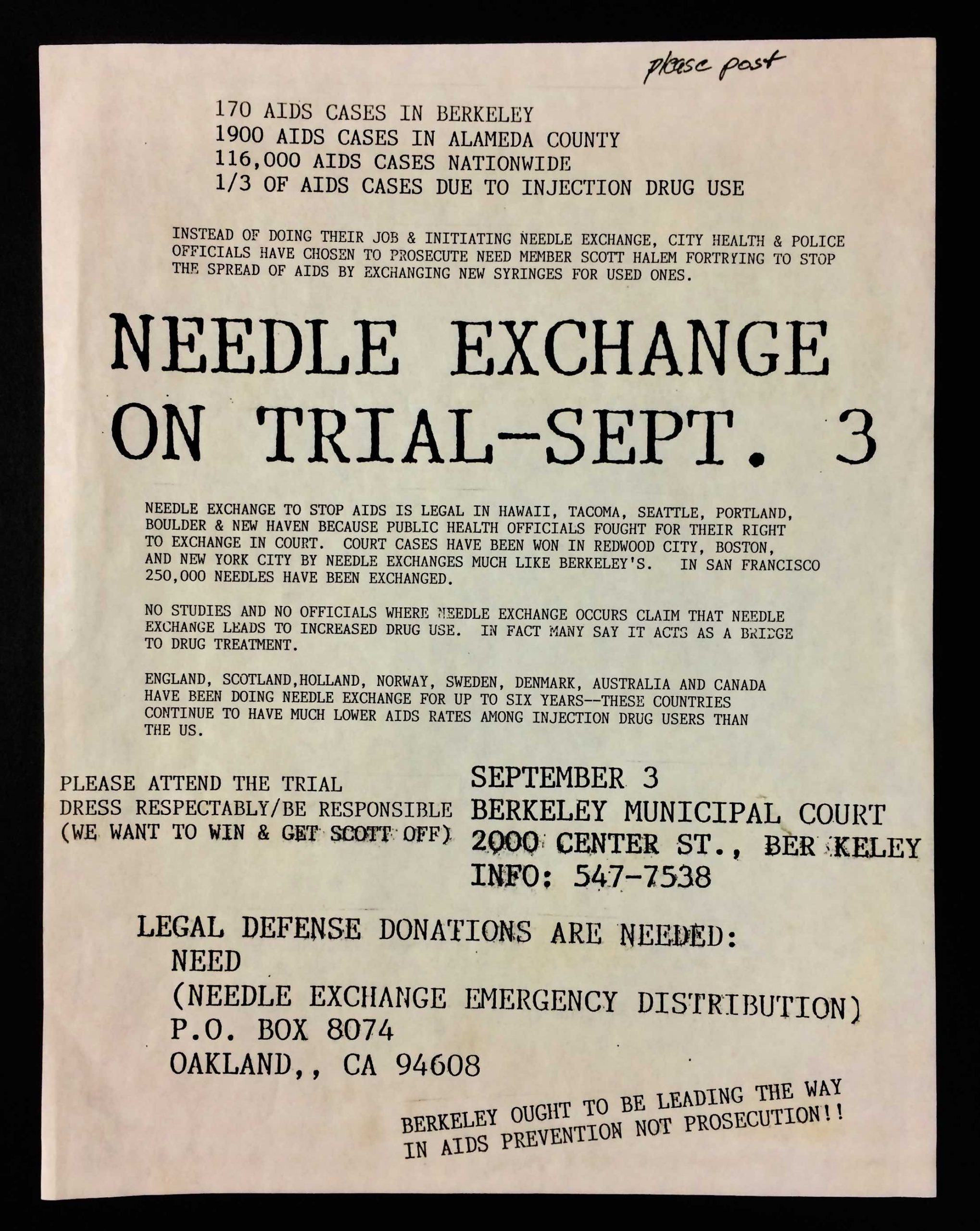 Harm reduction activist Scott Halem was arrested and tried for the first time in 1991 for distributing clean syringes, resulting in a hung jury. This flyer was to raise funds and awareness for this watershed legal case.

Learn more about Greg Ellis and Ward 5B on Instagram.

Linkedin
RELATED ARTICLES
OTHER ARTICLES
Yesterday queer activist group Lesbians and Gays support the Migrants staged a die-in at the Pride in London parade to protest the inclusion of police in the march reports Huck politics editor Ben Smoke.
Freddie Miller’s new series of photographs investigates who today’s trainspotters are and what drives their unfettered enthusiasm.
LGBTQ+ students are keeping the spirit of the original Pride alive by fighting for liberation for everyone, not just their community.
Photographer Matthew Brookes recalls following a group of young people in Venice Beach living in search of the perfect wave.
Photographer David Hoffman recalls documenting the extreme wealth inequality around Tower Hamlets and Hackney int the 1980s.
For decades, an area of East London has served as a community hub for Vietnamese people looking for a taste of home.