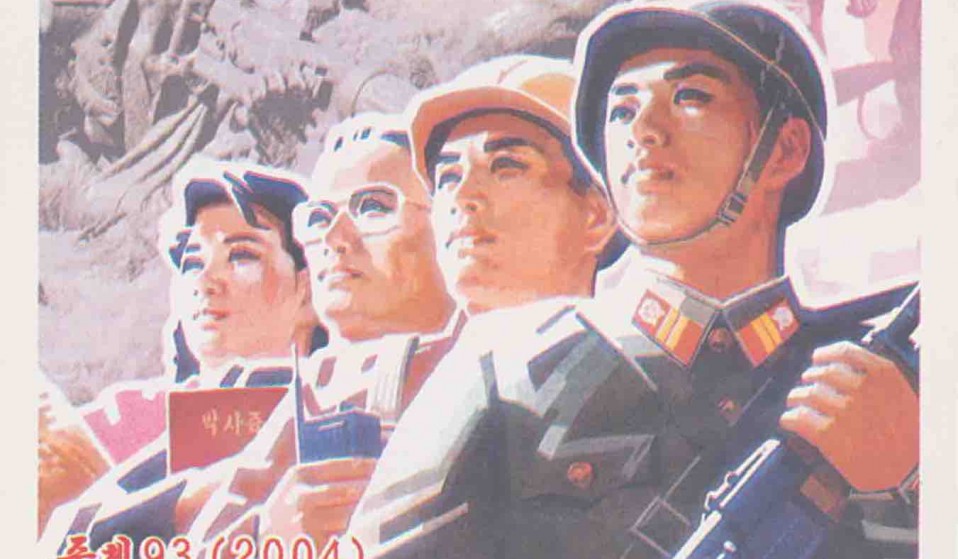 In his new book, Made In North Korea, tour guide Nicholas Bonner compiles the most comprehensive collection of the nation’s graphic ephemera to date.

In his new book, Made In North Korea, tour guide Nicholas Bonner compiles the most comprehensive collection of the nation’s graphic ephemera to date.

Advertisement and propaganda are a given constant of modern society. They’re everywhere: From the huge popularisation of ‘Keep Calm and Carry On’ merchandise all the way to the iconic Coca-Cola red, we have been conditioned to recognise certain references, and have begrudgingly accepted that the way a message is told is almost as important as the message itself. But what stories do these kinds of labels tell if you take away capitalism?

Several, apparently. Nicholas Bonner lives in Beijing, running Koryo Tours – a travel agency specialising in bringing tourists to the Democratic People’s Republic of Korea. He has been visiting the secretive country since 1993. During these travels, Nicholas has amassed an impressive collection of thousands of graphic design items pertaining to the secretive state – ranging from train tickets, all the way through to postcards and cutlery packages offered in planes.

And while these pieces separately may not seem to amount to much besides the visual and touristic, when placed together they form an intricate picture of over twenty years of North Korean society, going much further than propaganda and the news. The design choices present in these items capture many things. There’s the shift in the country’s relationship with the West, the modernisation of art, as well as the hurdles faced by North Korean citizens over the years.

Now, this history has been condensed in Made in North Korea. Published by Phaidon, the book features a selection of a few hundred items from Nicholas’ collection, amassed through years of dedicated hoarding, now methodically organised and accompanied by eight short essays, each one of them dissecting the social context in which these pieces were created.

Picked up along the tourist route, all of these are classified by Richard as common objects that any visitor would come in touch with. The collection is beautiful in itself, showing the strong influences of Soviet design in the colourful North Korean artwork, but it also offers a unique insight into the secretive state’s history, and places a question of how much stylistic freedom there is for artwork that is state-controlled. 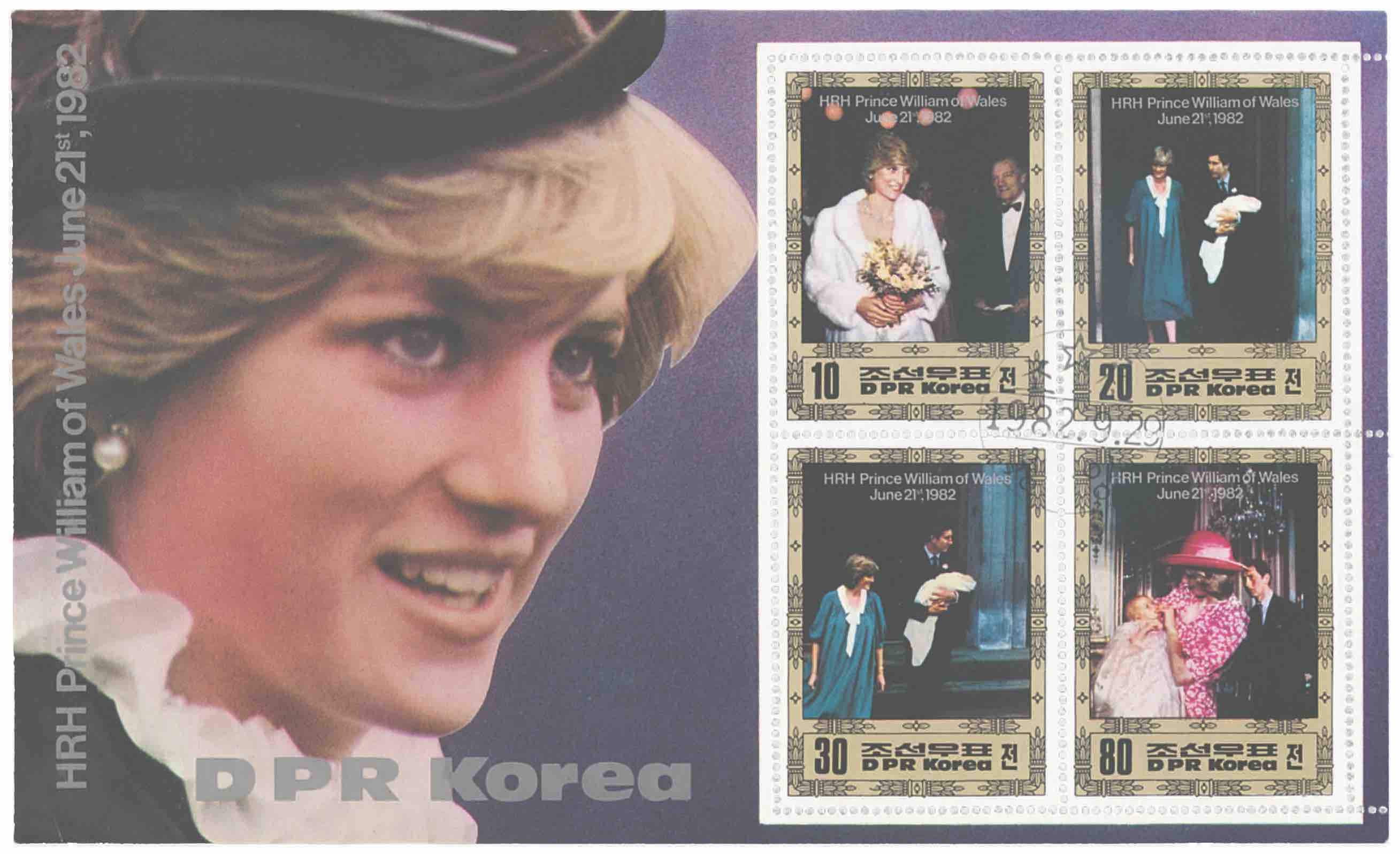 Commemorative stamp sets featuring the British Royal Family. Images of North Korean leaders are venerated and would never be shown on any products other than books they have penned themselves, such as The Great Teacher of Journalists (by Kim Jong Il). 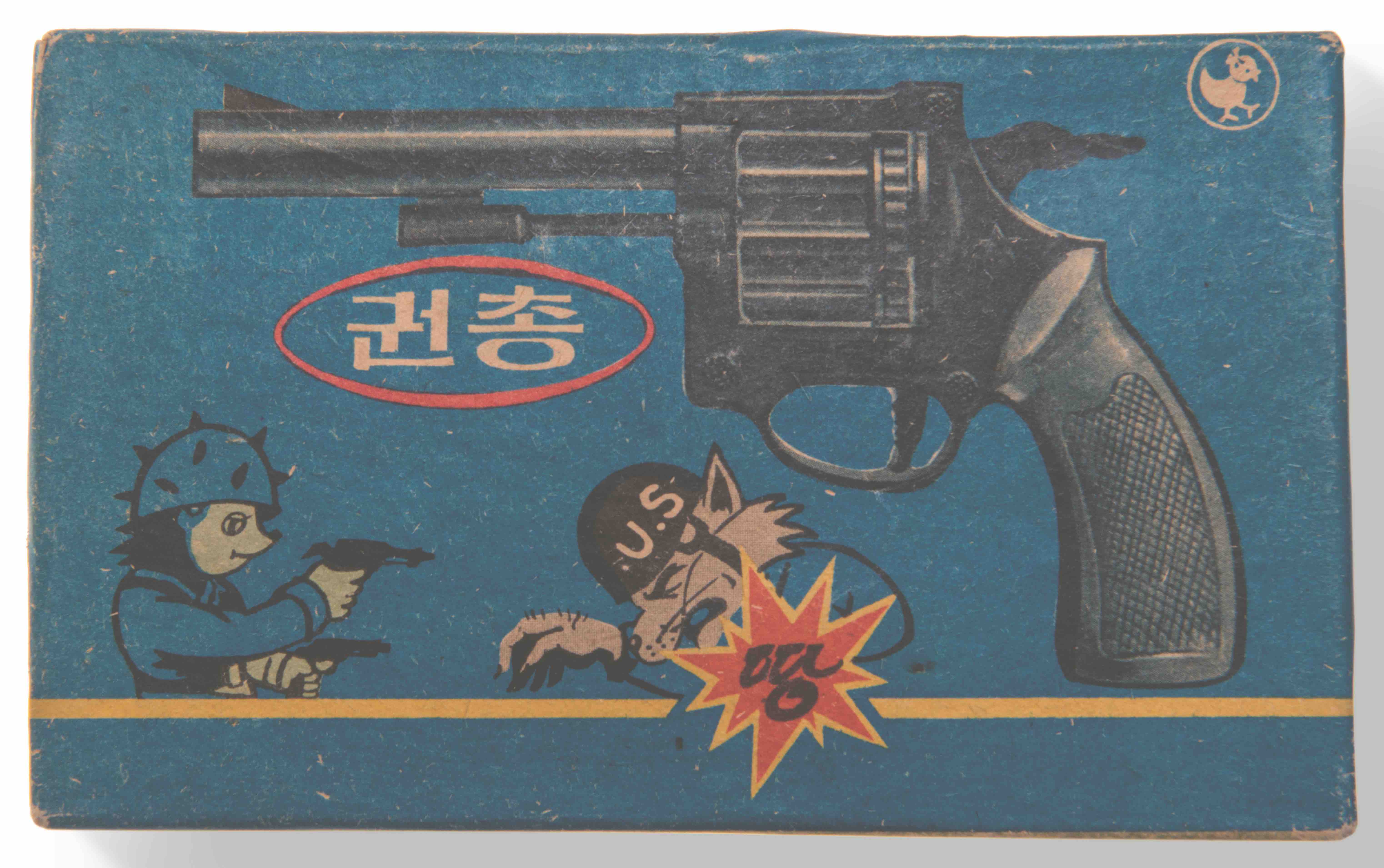 Box for a locally made toy gun that fires plastic bullets. The gun features the Korean Army slogan ‘Il Tang Paek’ meaning ‘one is the match for one hundred (enemies)’. The hedgehog is a popular cartoon character (representing the Korean hero) fighting the wolf and the weasel (representing the enemy – the Americans). 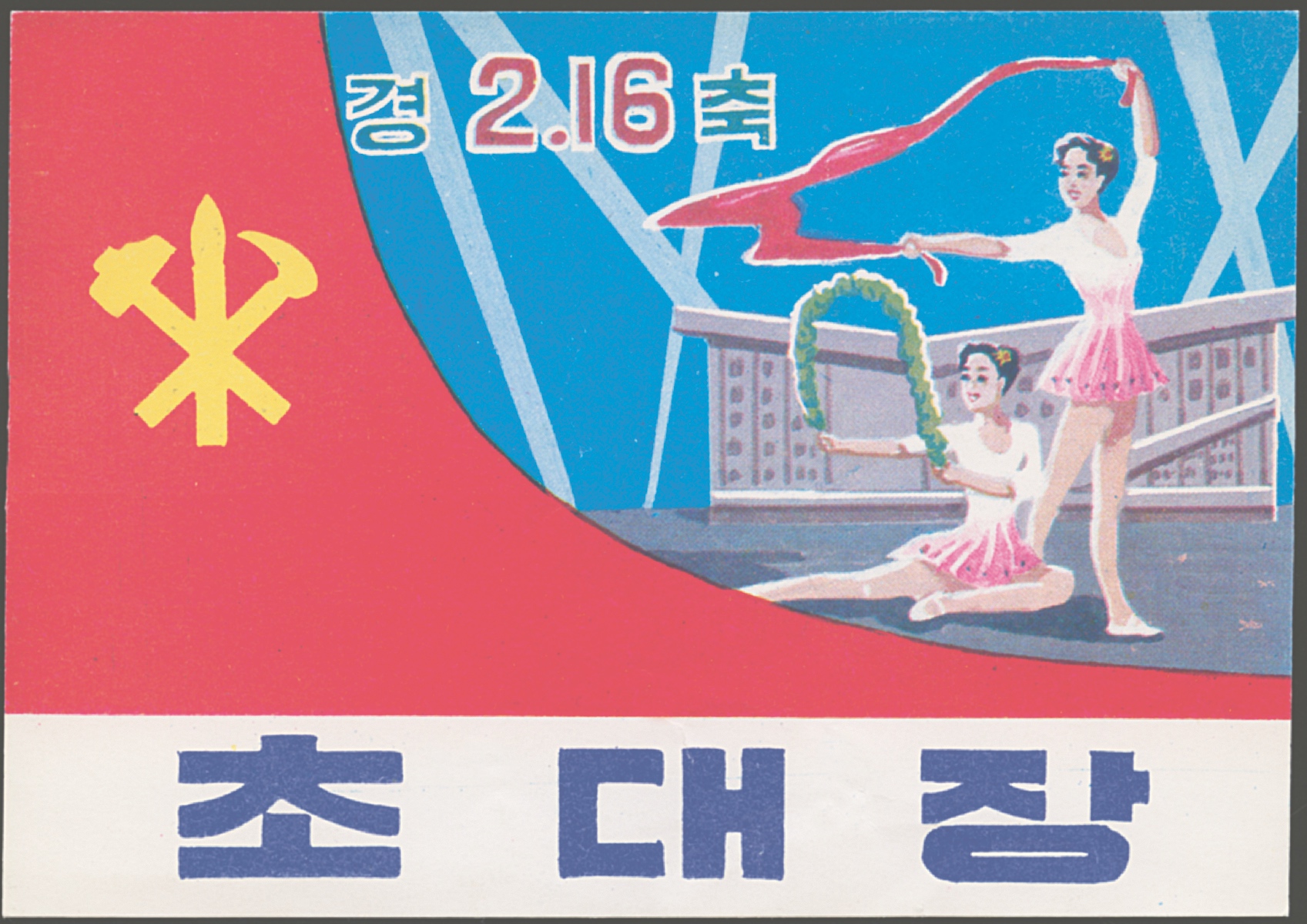 Ticket for the 1996 Mass Games entitled ‘Down with Imperialism Union’ – an
organisation established by Kim Il Sung in 1926 and considered to be the precursor of the Worker’s Party, the ruling party since 1945 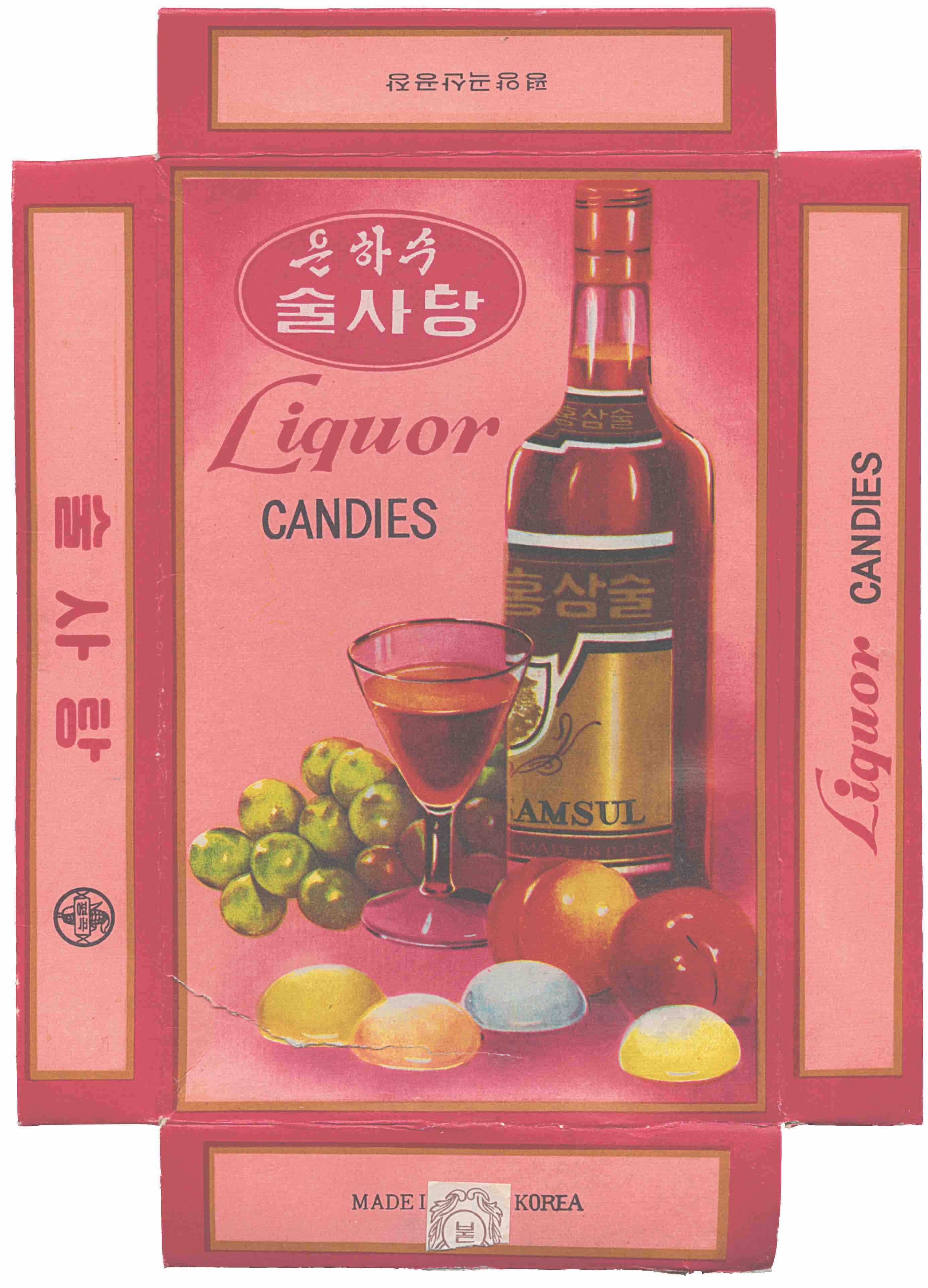 A box of Liquor Candies that emulates Western-style packaging associated in North Korea with luxury. The candies are filled with red ginseng-infused alcohol. 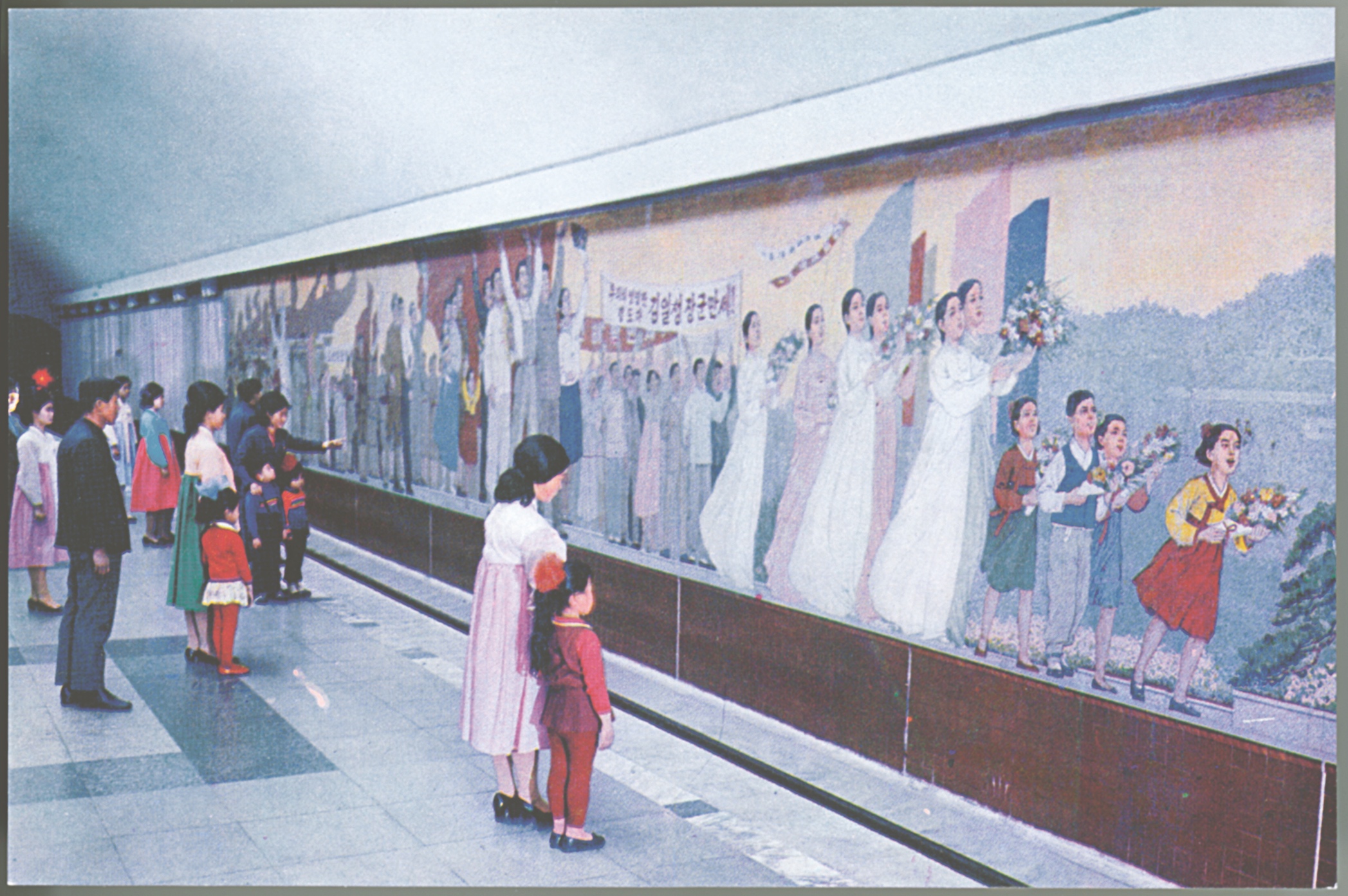 Card from a souvenir set of Pyongyang Metro postcards. In the 1990s and early 2000s there were rumours in the Western press that graffiti was being etched onto the windows of the Pyongyang Metro carriages. In fact, the carriages had been imported second-hand from West Berlin and the graffiti (impossible to remove from glass) was therefore in German. 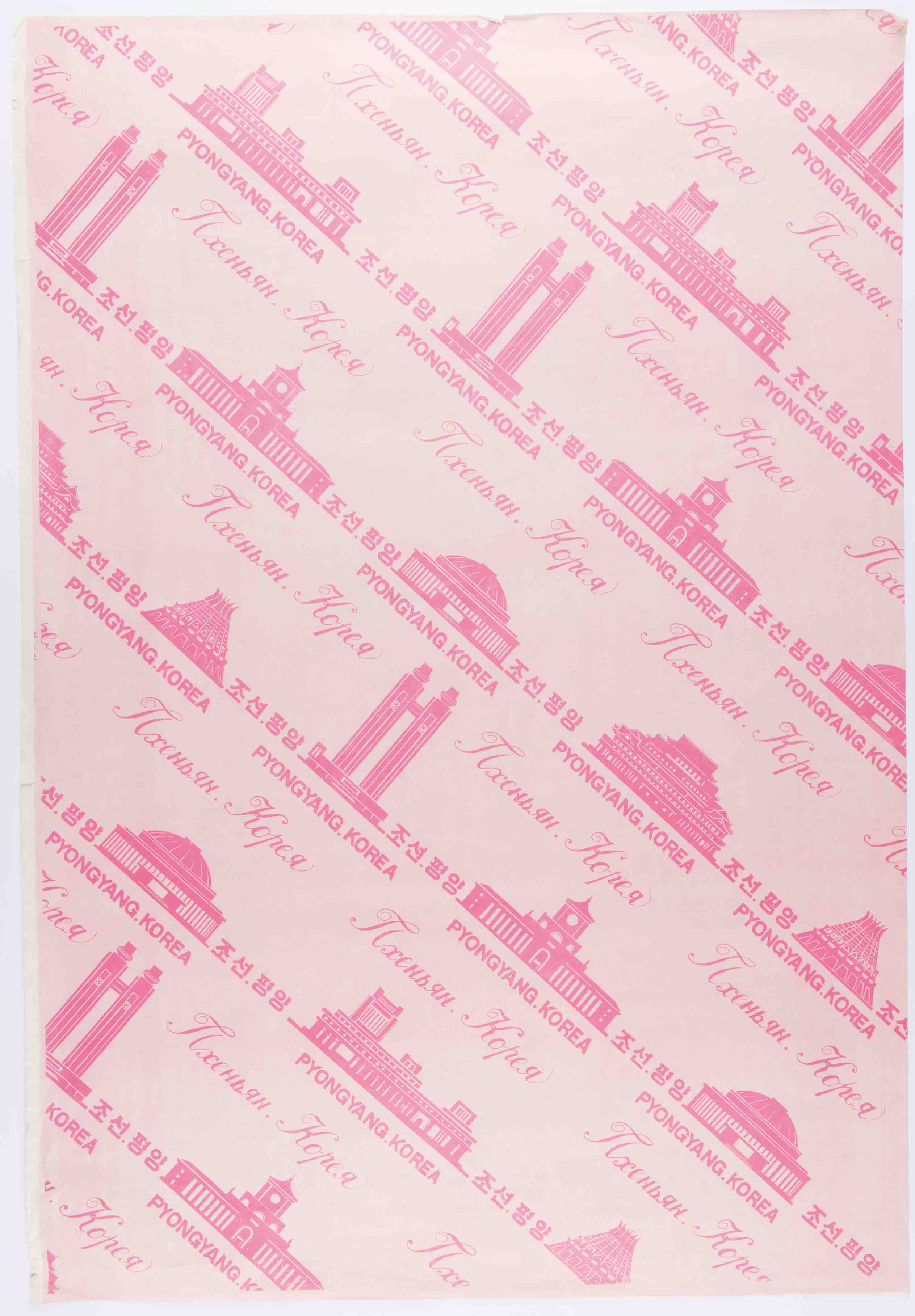 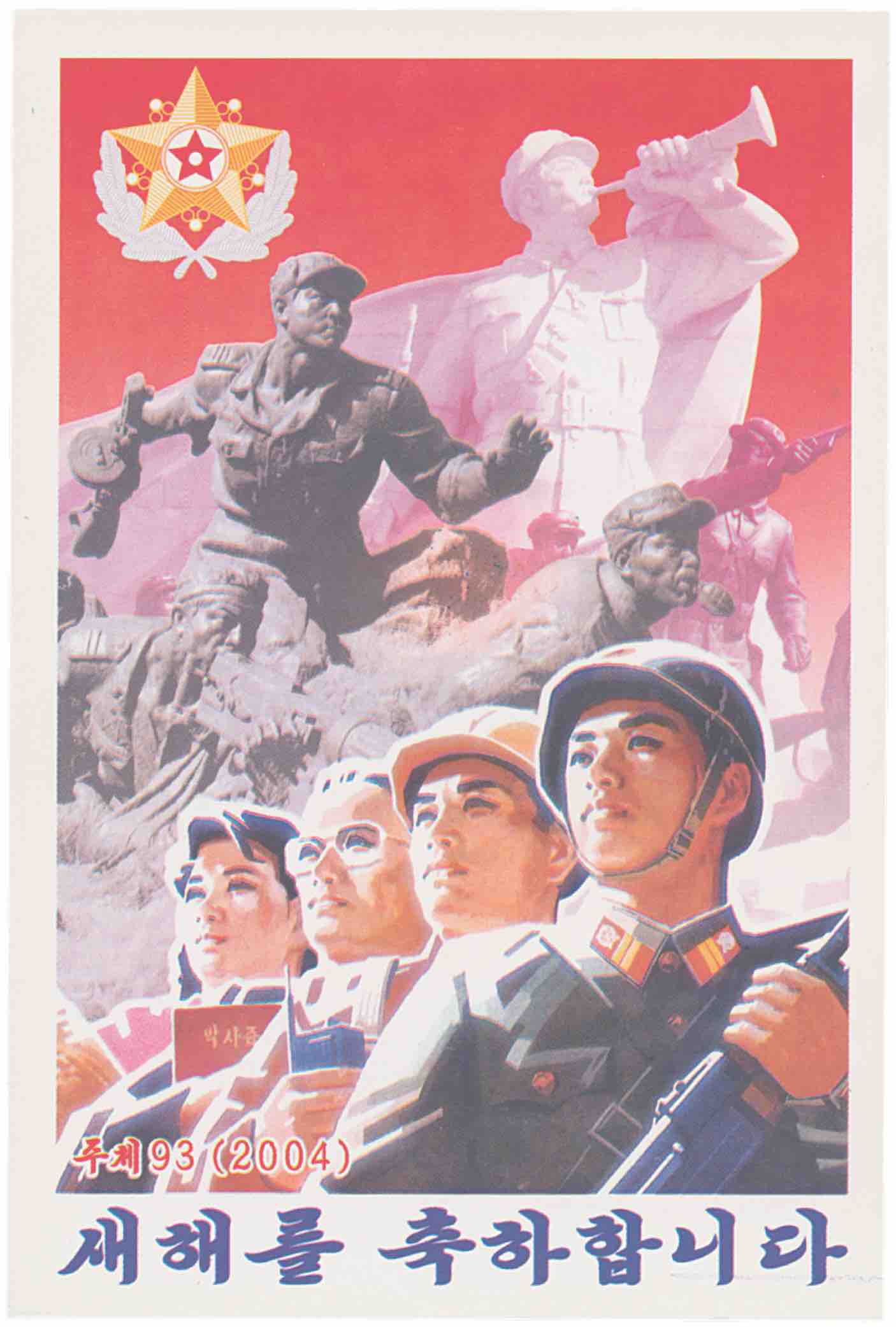 A New Year’s postcard from 2004 (Juche year 93) for use by members of the DPRK military services. The emblem (top left) is that of the ‘Supreme Commander’ (at that time Kim Jong Il). The card shows the various eras of military service. In the background the sculptures are of anti-Japanese guerrillas, then in the mid-ground ‘hero soldiers’ from the Korean War. In the foreground we see a contemporary soldier with members of the public (from left to right, a farmer, an intellectual and a worker) in unity. The slogan at the bottom reads: ‘Happy New Year’.

Made in North Korea by Nicholas Bonner is out on October 2nd and available for pre-order now via Phaidon.

Linkedin
RELATED ARTICLES
OTHER ARTICLES
Recent research is highlighting the drug’s enormous potential for treating substance abuse.
A new documentary tells the story of an unassuming cul-de-sac of 13 timber framed houses built by Fusions Jameen – London's first Black housing co-op.
Jack Lueders-Booth reflects on capturing the community that lived and worked along the city’s busiest railway route during the 1980s.
A campaign seeking to prevent future injustices where there is state involvement is gaining momentum, with Labour recently pledging its support.
Proponents of personality tests argue that they’re necessary to find the best person for the job – but in practise, they’re often discriminatory.
Max Miechowski reflects on documenting land that is being lost to the sea – and the people who live life on the edge.