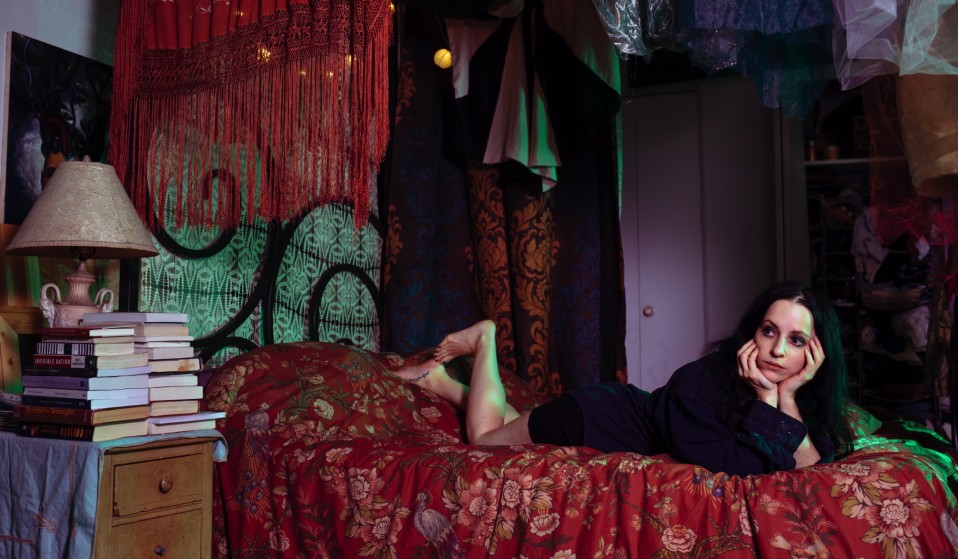 A gonzo journalist with an eye for moral justice.

Artist, activist, gonzo journalist, Molly Crabapple has reported from inside Guantanamo Bay armed with nothing but ink and an eye for moral justice.

Through the gaps between buildings on the tight, close roads around Manhattan’s financial district, one structure beams the sun back twice as hard. The Freedom Tower is a shimmering, angular piece of work, jutting into the bright blue afternoon.

In late 2011, in the shadow of this juggernaut, artist Molly Crabapple witnessed the birth and death of Occupy Wall Street. The apartment and studio where we meet today is a stone’s throw from Zuccotti Park, a couple of blocks from the skyscraper.

Crabapple devotes a lot of ink to Occupy Wall Street in her new memoir, Drawing Blood. She details and reimagines it.

Paintings and sketches that she committed to paper at the time are copied into the book alongside her recollections to illustrate the optimism and violence of that moment.

The few short months in which the Wall Street protests swelled and dissipated saw Crabapple’s art, and eventually her career, transformed and reinvigorated.

She became, according to Rolling Stone columnist and eventual collaborator Matt Taibbi, “Occupy’s most important artist”.

“During Occupy it felt like being in love,” she says now. “It’s like you’re almost high with it and when you’re in it things seem so important.

“I remember there were these nights and it felt like the most important thing in the world was that we stood on a ledge that the cops blocked off.

“It’s a fucking ledge, y’know? But in that moment, you’re like, ‘THIS LEDGE! IT’S EVERYTHING! THIS IS OUR LEDGE!’”

Inside Crabapple’s apartment and studio, it’s beautifully organised chaos. Two old water bottles from The Box, the infamous high-class Burlesque club where she became artist-in-residence, sit on top of a window ledge.

A few Arabic-language books – she’s been teaching herself between reporting trips to the Middle East – are stacked up on a shelf.

High in a far corner, half-hidden behind an easel, hangs the original copy of a poster that Crabapple designed in 2011 for Occupy, one that’s been copied, reprinted, affixed to placards and stuck to walls around the world.

A Latina woman, holding an American flag, covered in a confident message of defiance: ‘Can you see the new world through the tear gas?’

“In America, we just got our hopes dashed,” she says of Occupy’s decline. “Whereas in Egypt, they have a fascist [government]. Or in Greece, a political party that really emerged out of those protests was utterly humiliated and crushed by global capital. 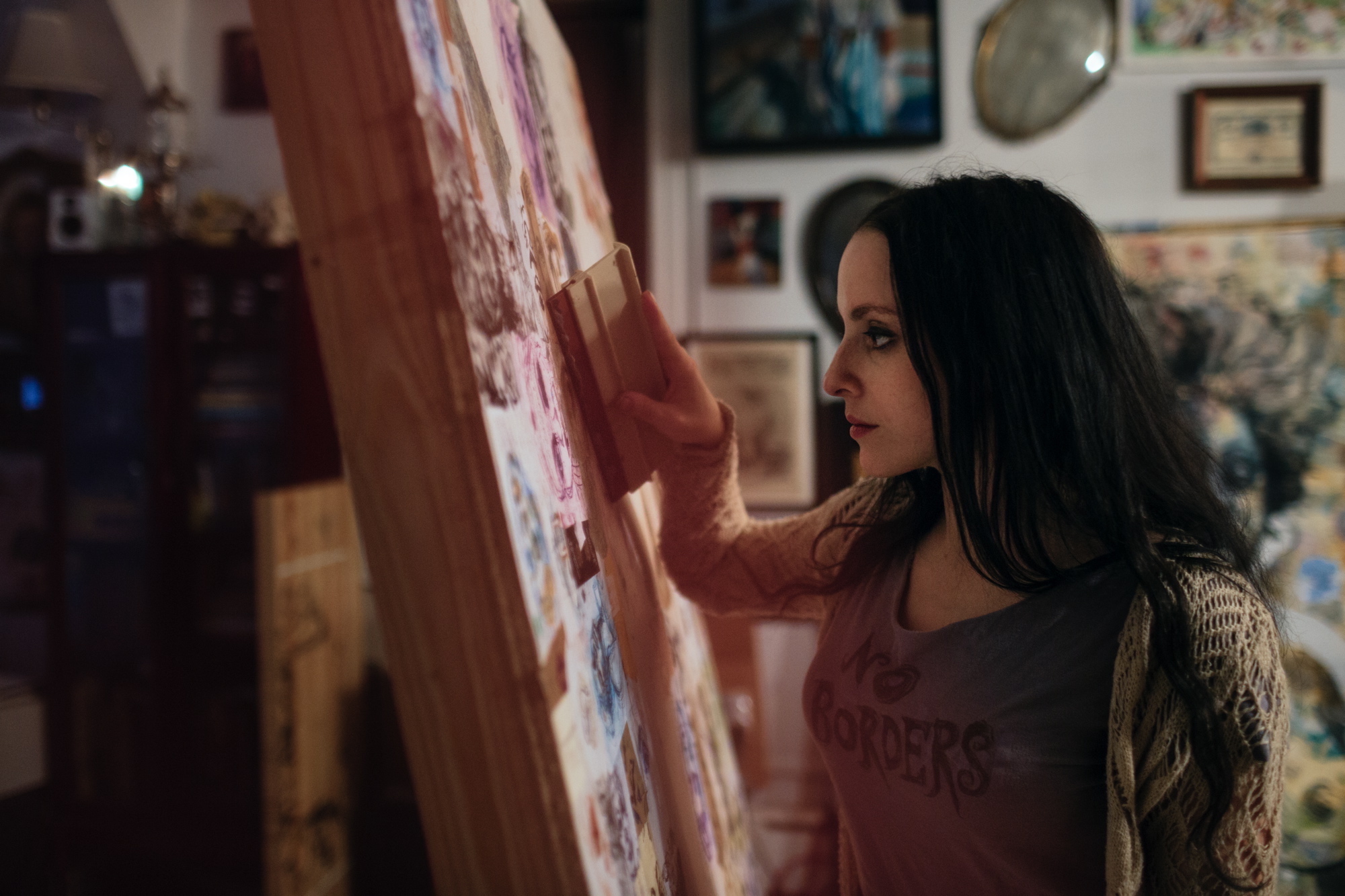 “Sometimes, it’s a little bit sad looking at this moment when there really seemed like there was so much hope for people-powered uprising. And I still so much believe in that, but then looking at how it turned out four years later…”

Crabapple speaks in a hurry. She stares down at a small cup of Turkish coffee most of the time but, when she looks up, her dark eyes are wide. When Molly Crabapple talks about something dear to her, she seems moved by it all over again, reliving its ecstasy and pain.

That comes through on paper and canvas, too. At The Box’s London location, where she was commissioned to paint the new venue’s walls, she detailed sprawling scenes with customers portrayed as pigs and performers as deities.

Having worked as a burlesque dancer and a nude model for Suicide Girls, she’d been on both sides of the stage and lens.

So, the jump from art to visual journalism, inspired in part by journalist, activist and collaborator Laurie Penny wasn’t a stretch. The new medium just required the same level of involvement and care that her sprawling, detailed canvasses do.

“The kind of journalism I really hate is like [New York Times op-ed columnist] Nik Kristof journalism where it’s like, ‘Look at the poor, the poor, so sad.’ That’s undignified. It’s not going to make anyone give up their unjustly won privileges just because they feel sorry for someone. You know, pity is corrosive and it’s demeaning.”

That’s led Crabapple to some vital stories in the past two years. While writing Drawing Blood, she’s covered striking workers in Abu Dhabi and the struggle of inmates in solitary confinement in the US. She’s reported back from Syrian refugee camps in Lebanon and squats in Seville, throwing herself into the task with, at times, fearless abandon.

Visually, her work stands somewhere between the French post-impressionist Henri de Toulouse-Lautrec and Ralph Steadman. But Crabapple often plays Steadman to her own Hunter S. Thompson, ecstatically animating her own disquieting reporting.

“If I have one thing that I’m interested in,” she says, looking up from her coffee again, “it’s really smart people who are fighters, who maybe are being kicked around by the world. But they’re fighting back.”

If this is the throughline of Crabapple’s work, then it’s underpinned by a broader desire to resist authority in all its forms. “I grew up angry, kicking against the boundaries of childhood,” she says. Her father is a Marxist, something that impacted her from a young age. “When I was a little kid he would always be explaining the principles of class conflict. He would always tell me, ‘I have two rules for you. Confront authority and be interesting.’”

That desire to play the thorn in the side came out in her disruptive reporting from Guantanamo Bay in 2013, the nexus of her work as an artist and journalist. Strict censorship rules at the prison forbid artists and photographers from portraying the faces of guards. So, she portrayed them with apathetic smiley masks.

She lights up when she thinks about contravening the camp’s rules: “It was fucking beautiful… And then the second time I went back I swear to fucking God, they brought me guards that I could draw. And I swear they must have done a fucking casting for, like, the most wholesomely photogenic soldiers of Gitmo, because I’ve never seen anything fucking like it.”

Now, with her work in constant demand, Crabapple’s year will involve diving headfirst into incomprehensible horrors and injustices. The refugee crisis is worsening in Europe, Guantanamo Bay remains open, and Crabapple knows she’ll be busy.

“I’ve been retreating into literature,” she says, pointing to a copy of Abdul Rahman Munif’s Cities of Salt, an essential work of Arabic fiction considering the impact of newfound oil reserves on a once-perfect town. “I’m like this is beautiful, I can read this, away from the bad things for a bit.”

Linkedin
RELATED ARTICLES
OTHER ARTICLES
In the latest instalment of Photographers in Conversation, the chronicler of raves, protests and beyond explains why he’s drawn to such specifically visceral environments.
Freddie Miller’s new series of photographs investigates who today’s trainspotters are and what drives their unfettered enthusiasm.
A new edition of a seminal book brings together iconic images of the band onstage in their full glory and backstage in moments of unguarded camaraderie.
In her new book, the author explores the country’s housing crisis in human terms and calls for radical action to address a broken system.
The singer-songwriter discusses her intimate new project – and the advice she’s picked up across a career as one of rock’s leading voices.
The author discusses the all-consuming nature of heartbreak, and turning the experience into an incisive exploration of love and loss.