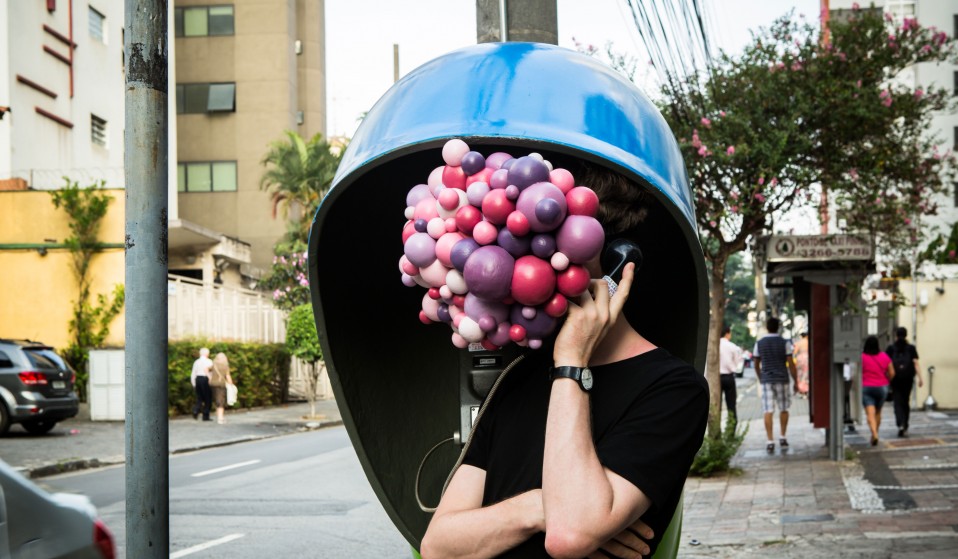 As protests against the Olympics and corruption have exposed Brazil’s ruptures for the world to see, a pioneering collaborative art project between British and Brazilian artists digs into São Paulo’s dividing lines.

As protests against the Olympics and corruption have exposed Brazil’s ruptures for the world to see, a pioneering collaborative art project between British and Brazilian artists digs into São Paulo’s dividing lines.

Angry protestors beating drums, sounding horns and waving placards have brought São Paulo’s main avenue, Avenida Paulista, to standstill once again – as they have countless times this year. They’re protesting against Brazil’s collapsing economy and its dysfunctional political class, which has been plunged into disrepute by a far-reaching corruption scandal. The protestors have congregated around the FIESP building, a towering, retro-futurist black pyramid that dominates the avenue.

Inside the building, in the SESI Gallery on the ground floor, a group of artists are rushing to put finishing touches to a pioneering virtual reality project. The cacophony of the protest outside echoes through the building as they work long into the night. Although this series of events couldn’t have been predicted, the back-to-back protests and counter-protests provide a symbolically appropriate background to their project, which explores the many fractures that divide the city of São Paulo. 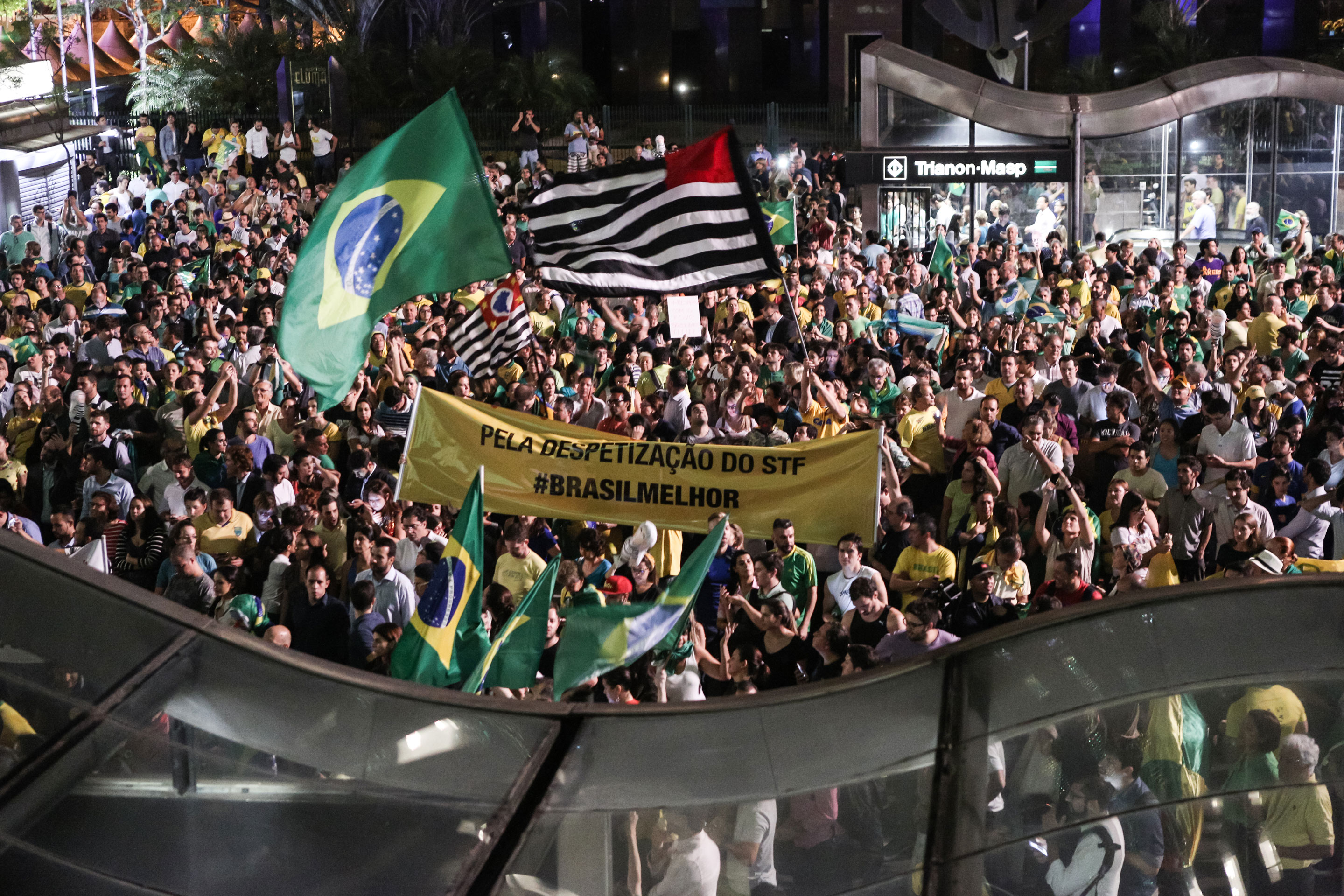 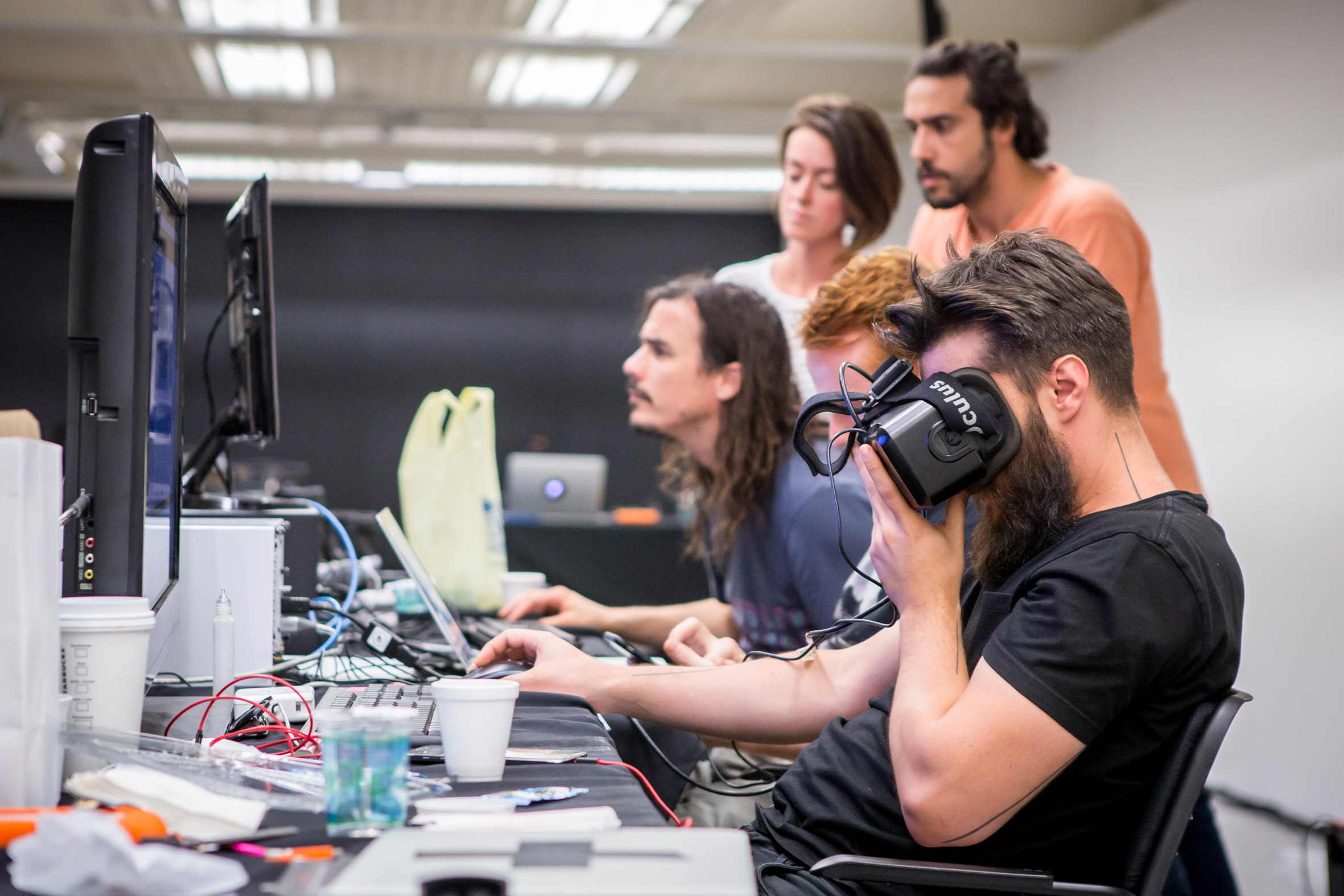 The Olympic games in Rio de Janeiro and huge protests for and against the eventual impeachment of former president president Dilma Rousseff over allegations of corruption, have brought Brazil’s divisions out into the open.

Over a decade of economic growth and progressive, redistributive policies by Rousseff and her predecessor Luiz Inácio “Lula” da Silva’s Workers Party pulled 40 million out of poverty and papered over deep-rooted social divides that date back to the colonial era, but now that the economy is tanking, the fault lines are visible for all to see – and the country has become increasingly polarised.

Brazil was the last country in the Western world to abolish slavery, only doing so in 1888. It is yet to fully face up to this unjust legacy and remains one of the most unequal countries in the world, with these divisions reflected on a variety of levels in each of its cities. 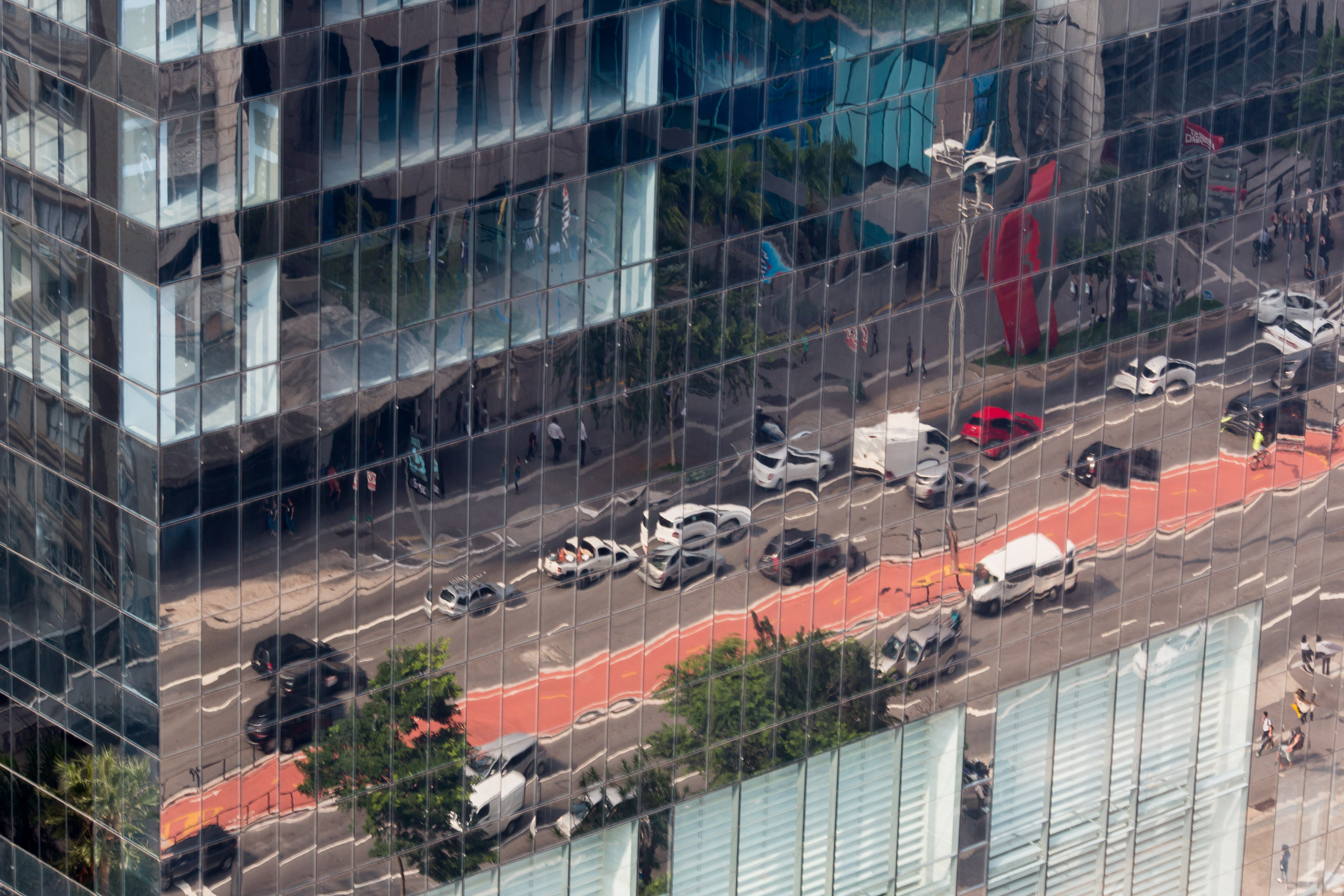 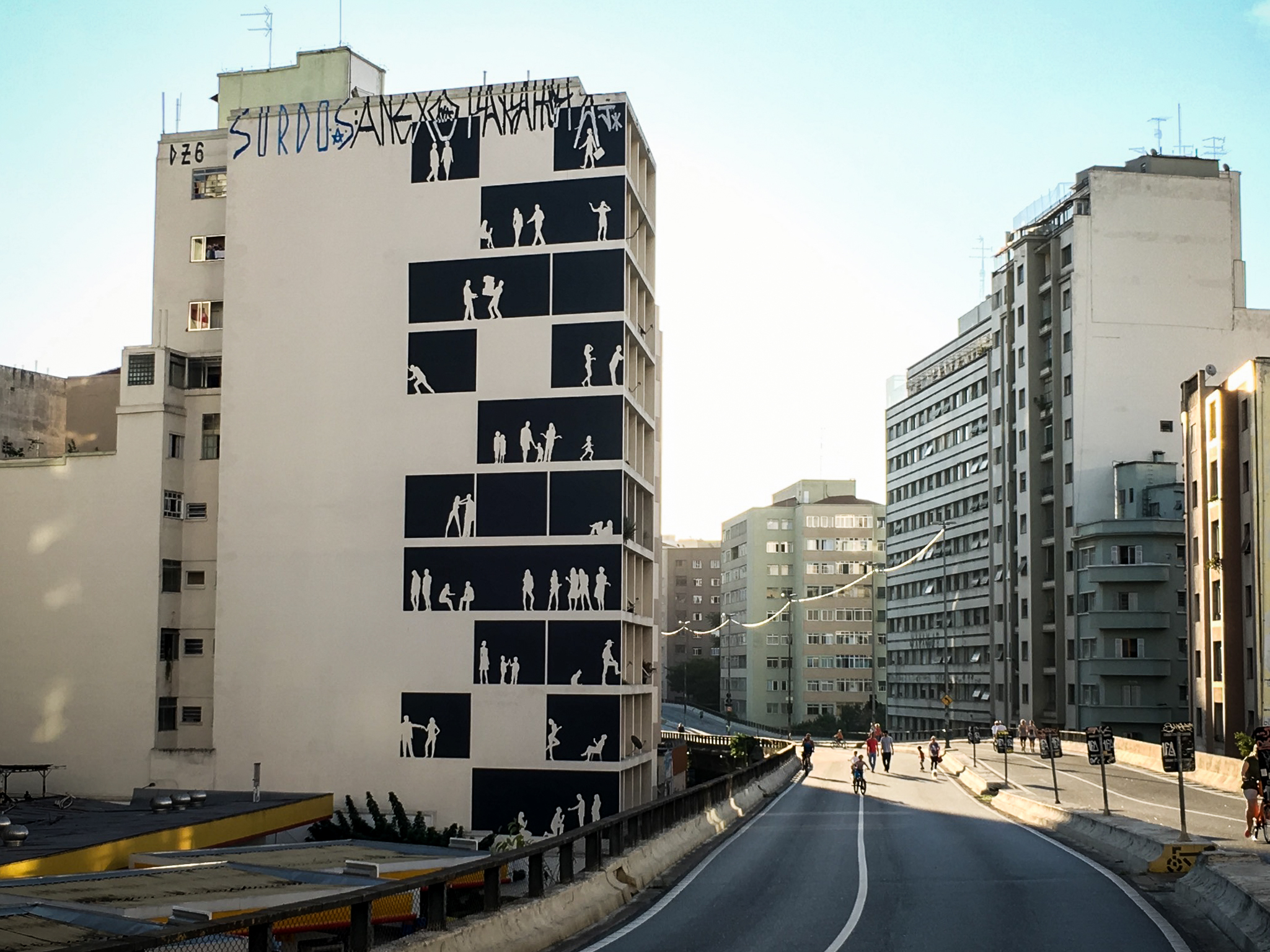 As the numerous evictions of poor residents to make way for Olympic stadiums revealed, the wealthy, powerful and predominantly white upper class benefits from development, while the poorer, browner and less politically-connected underclass are excluded both from decision-making and the benefits that arise from huge state-sponsored projects like the Olympics. The battle lines in protests across the country in recent months have largely been drawn around whether to protect this elite privilege, or fight to integrate all Brazilians into the fabric of society and politics. The current all-white and all-male cabinet, led by Rousseff’s successor and key beneficiary of the coup to oust her, Michel Temer, indicates which way the tide is flowing.

Rio’s iconic hillside favelas make the division between rich and poor highly visible, but São Paulo too has favelas, and is home to the largest slum population in South America. Brazil is a technicolour society that some claim to be racism-free, however there is a racial component to inequality that is visible on the streets: darker-skinned people from the favelas and poorer suburbs commute to wealthier neighbourhoods and business districts to work, often as labourers, domestic servants or security guards outside the homes, hotels and office buildings of whites. 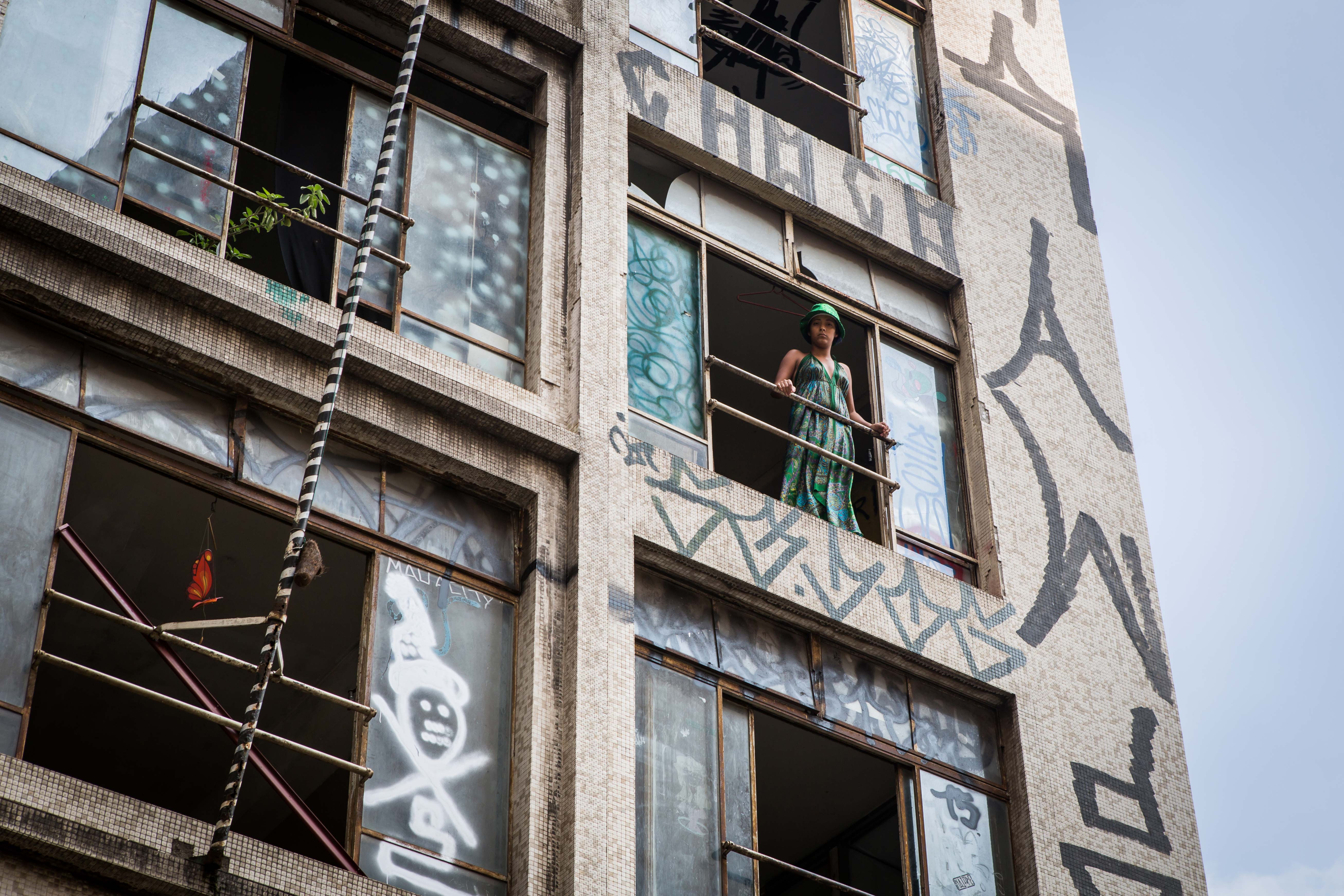 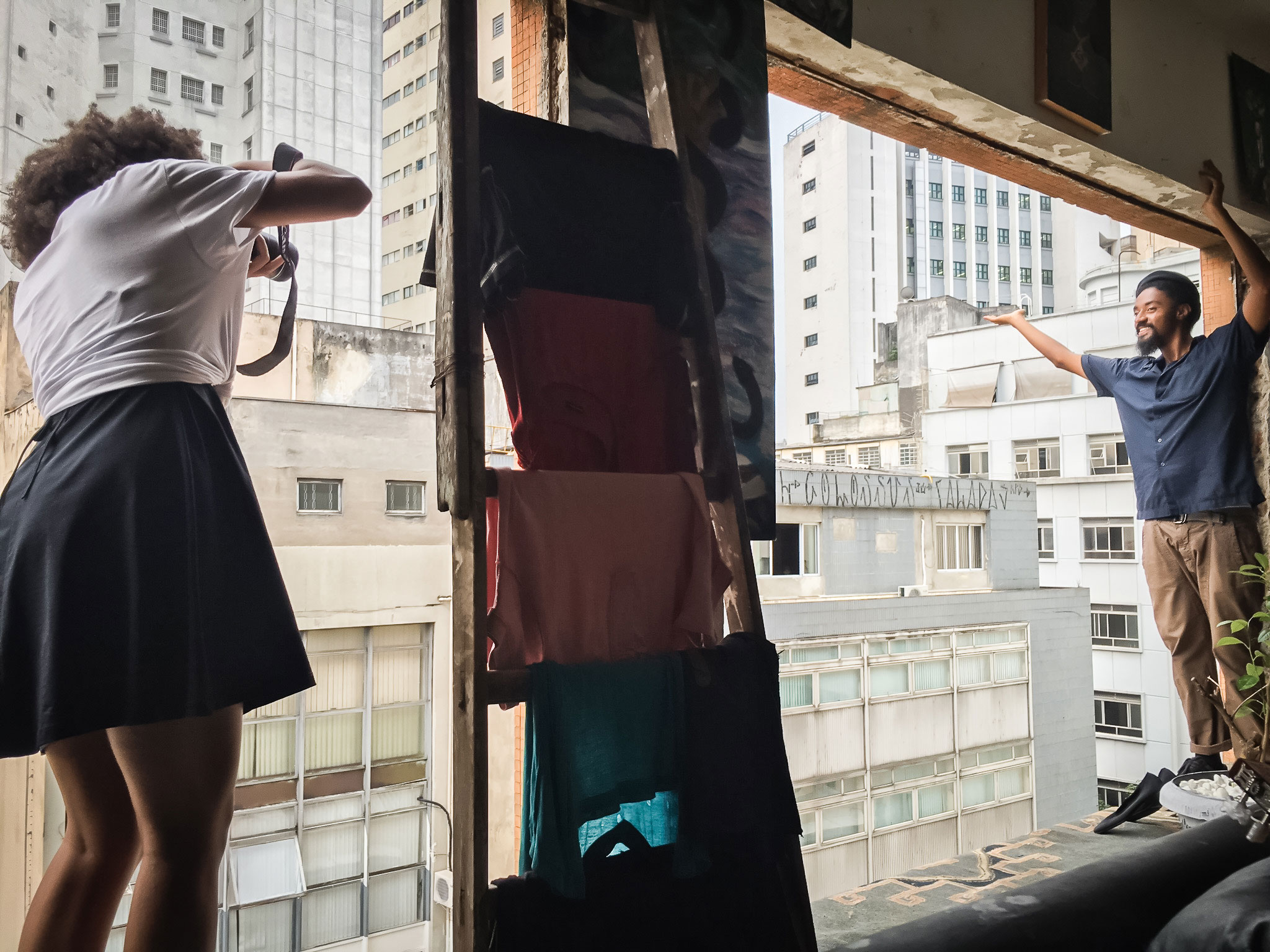 The Dividing Lines concept was the starting point for a wide-ranging discussion between Marshmallow Laser Feast and their Brazilian collaborators about the contrasts, divisions and conflicts that exist – visibly or invisibly – within the city. “We came to São Paulo to explore the idea of contrasts within the city on different levels, including socioeconomic, cultural and aesthetic,” Ersinhan explains. “We are taking an artistic view on that investigation and working alongside local artists to combine their thoughts and insights on the city with ours.”

“These dividing lines are a very expansive construct, because you can see them visually, ethically, morally and politically,” explains designer and videographer Daniel Graf, one of the local participants. “But specifically in São Paulo we have a lot of dividing lines and contrasts that you cannot see. Or sometimes you know they exist, but you just don’t see them in your daily routine.”

Not all of the city’s contrasts are negative, however, stresses designer and fashion producer Monica Ventura. “You can see the beauty in these contrasts,” she explains. “The built richness of the city sits alongside stunning natural areas that survive amongst all the concrete. But the power of nature is consistently under threat from urbanisation: the only river in the city is dead, for example.” 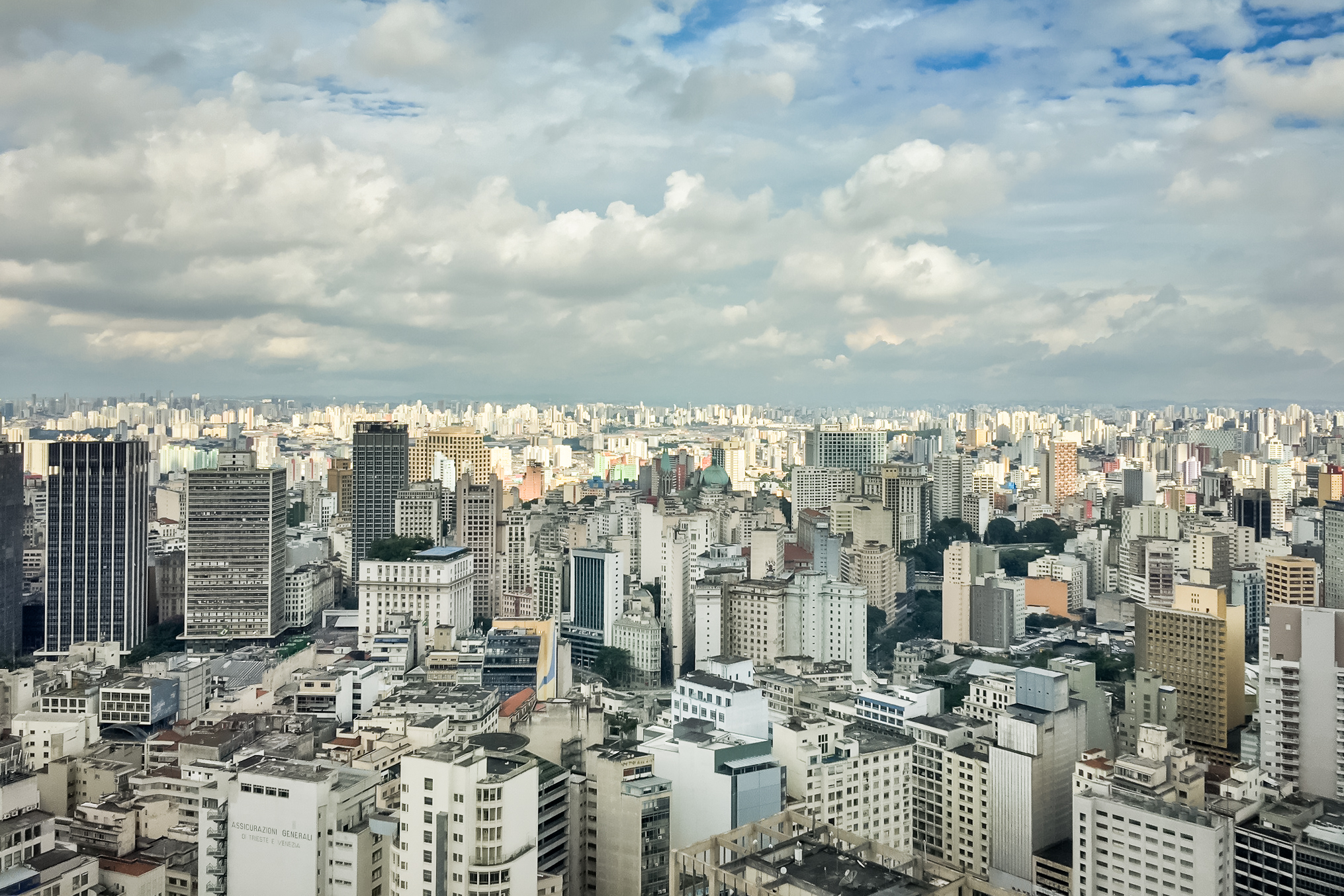 MLF were energised by the creativity they saw all around them, from art to performance to graffiti and music, but with huge protests underway during their time in São Paulo, the political and economic divides were impossible to ignore.

Their challenge was to represent the multiple layers of the city’s fractured identity through their own immersive practice. “We decided the best way to tell the story of contrasts was to sample different locations and then collage them together,” explains Barney Churchill Steele. They used Lidar, a 360-degree laser scanning technology originally developed for architects, to take 360-degree digital snapshots of each location. “Lidar is a mechanism for sampling reality to build virtual worlds,” Barney explains. “Virtual reality is a tool to allow you to explore those worlds.”

Sharing the process MLF developed for their previous project In The Eyes of the Animal, they led workshops for their Brazilian collaborators in 3D mapping, 360 degree photography and virtual reality storytelling. Together they created a multidisciplinary investigation of the Dividing Lines concept featuring photography, design and research; a new virtual reality experience; and a giant public artwork for the facade of the 25 storey FIESP building, which contains SESI Gallery. 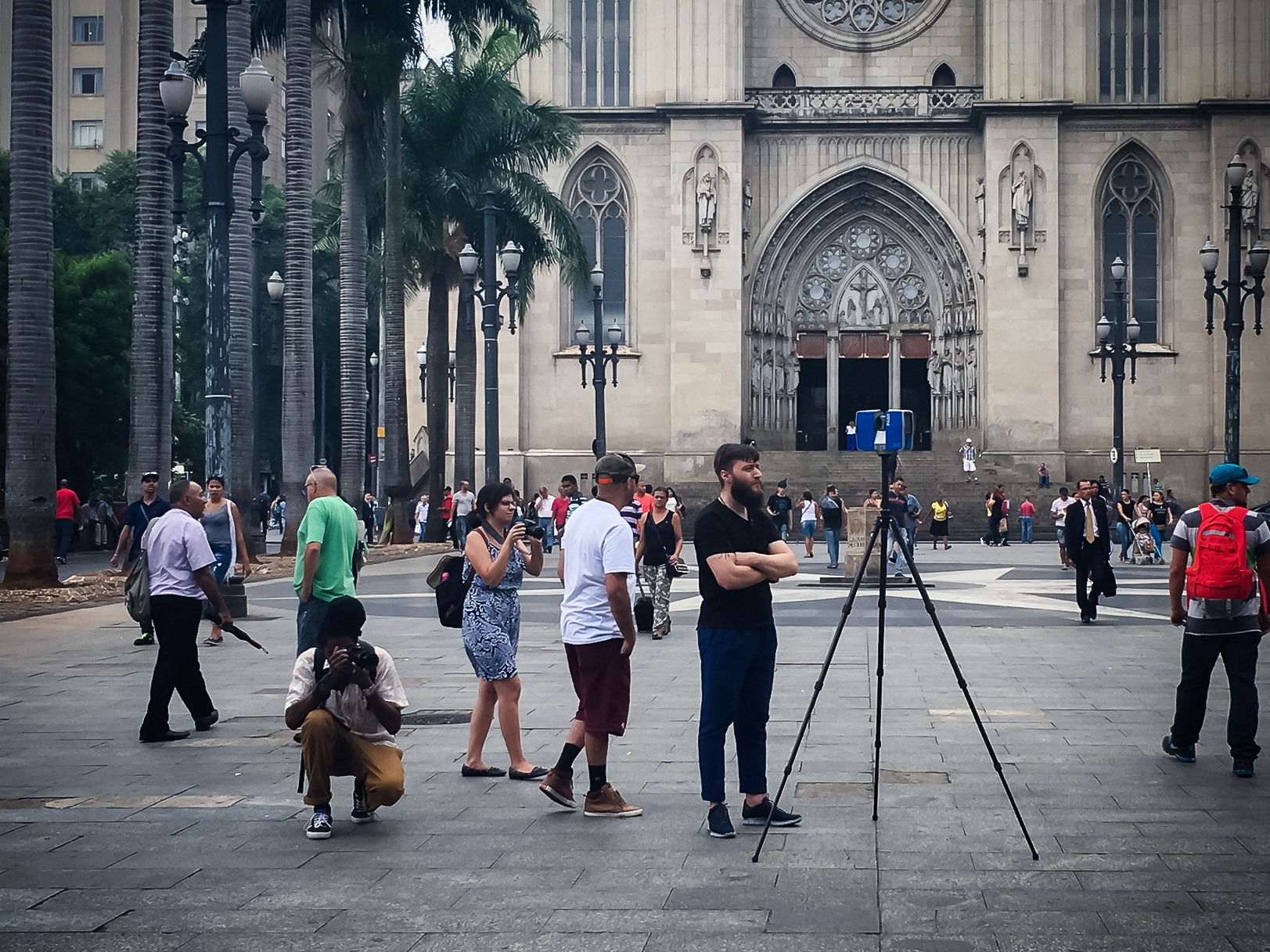 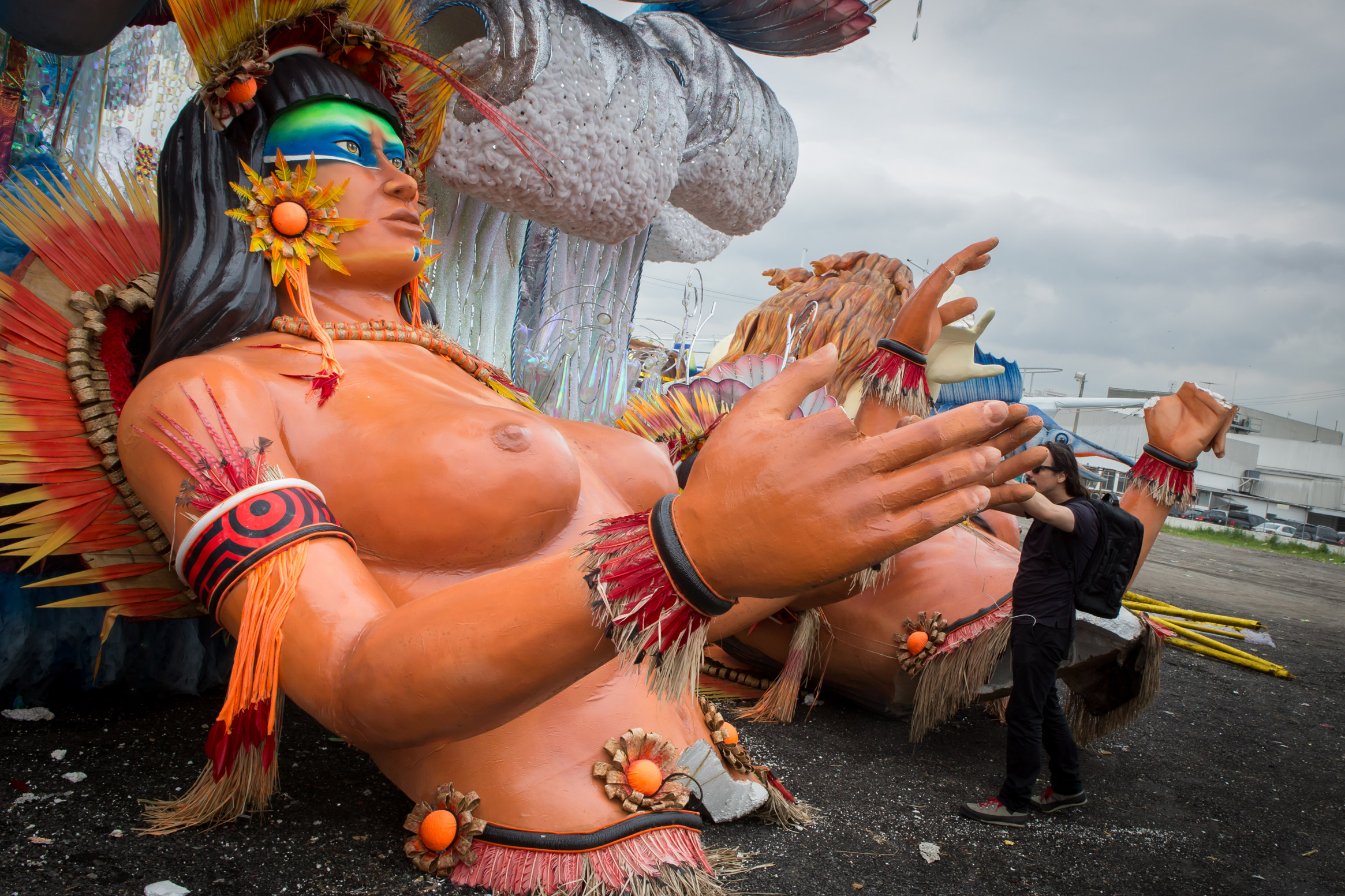 The locations were chosen with local artists, who suggested places they felt best represented the social and cultural dynamics of São Paulo. Monica’s contribution was Ocupa Ouvidor, a multi-storey squat and artists’ collective in the central administrative district. “There are lots of occupations because you have lots of old, empty buildings in downtown,” Monica explains. Like rural land, property in Brazil’s cities has historically been held in the hands of a few, with many Brazilians still fighting for their right to adequate housing.

“They’re dead places, that don’t provide any benefit to society, while there are loads of people living on the streets,” she continues. So artists and activists occupy buildings, create beautiful art and provide people with places to live. For me, the Ocupa Ouvidor squat is the mid-point between order, chaos and dreams. They don’t have electricity or running water but this almost utopian community of artists plant and grow their own food. They exist alongside the office workers, who are sold dreams: they have a life, but at the same time they don’t have a life.” 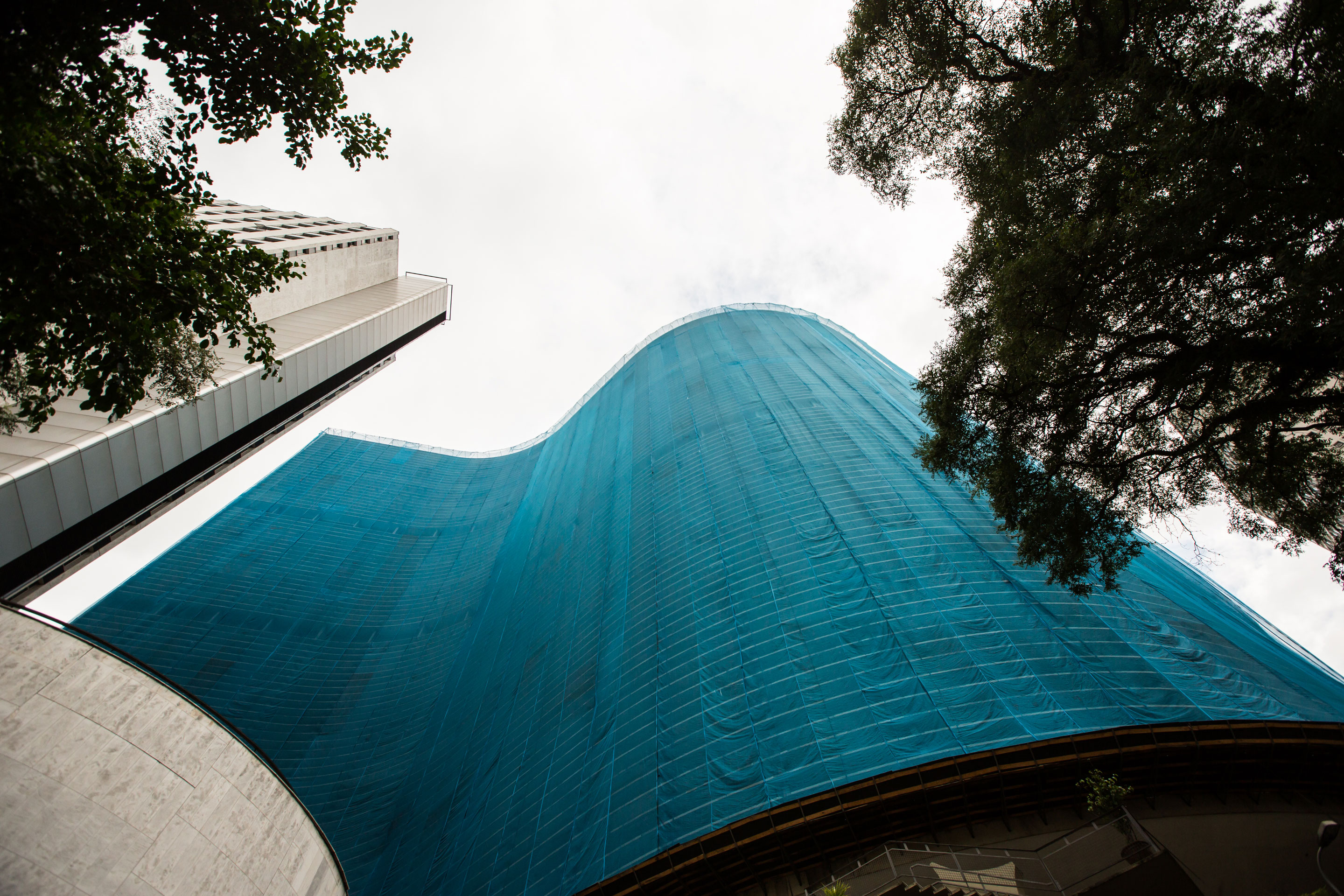 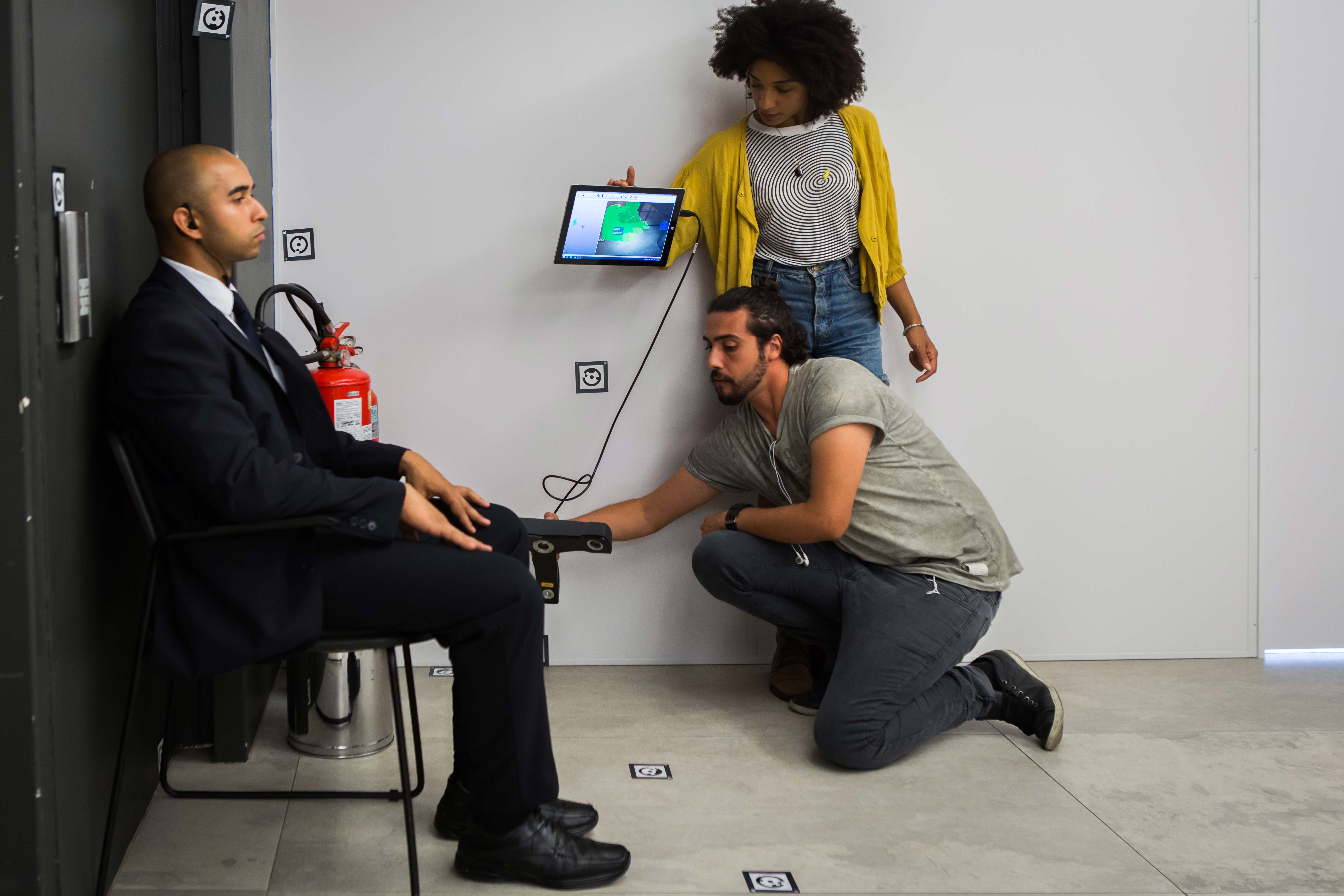 After being scanned, each of the chosen locations were stitched together virtually and manipulated. Putting on MLF’s multicoloured, custom-designed virtual reality headset thrusts you into a mesmerising, narrative journey through the city. You float by tourist spots then burst through walls into lesser-known corners of the city, pass Indigenous female warriors from the dump where carnival floats go to be recycled, the lush vegetation of Ibirapuera Park and the graffitied concrete of the Ocupa Ouvidor squat, before coming face to face with a giant, seated security guard who towers over Brazilian modernist architect Oscar Niemeyer’s wave-like Edificio Copan.

“The personality of the city starts to present itself,” Barney explains. “Creativity is a real driving force in São Paulo. The gridded city, the architecture and everything corporate is broken up by nature, the curves, the graffiti, the dance, the carnival, the vibes and the people – they love life. The major sensation we wanted to leave with the viewer was this idea of creativity exploding on the streets.” 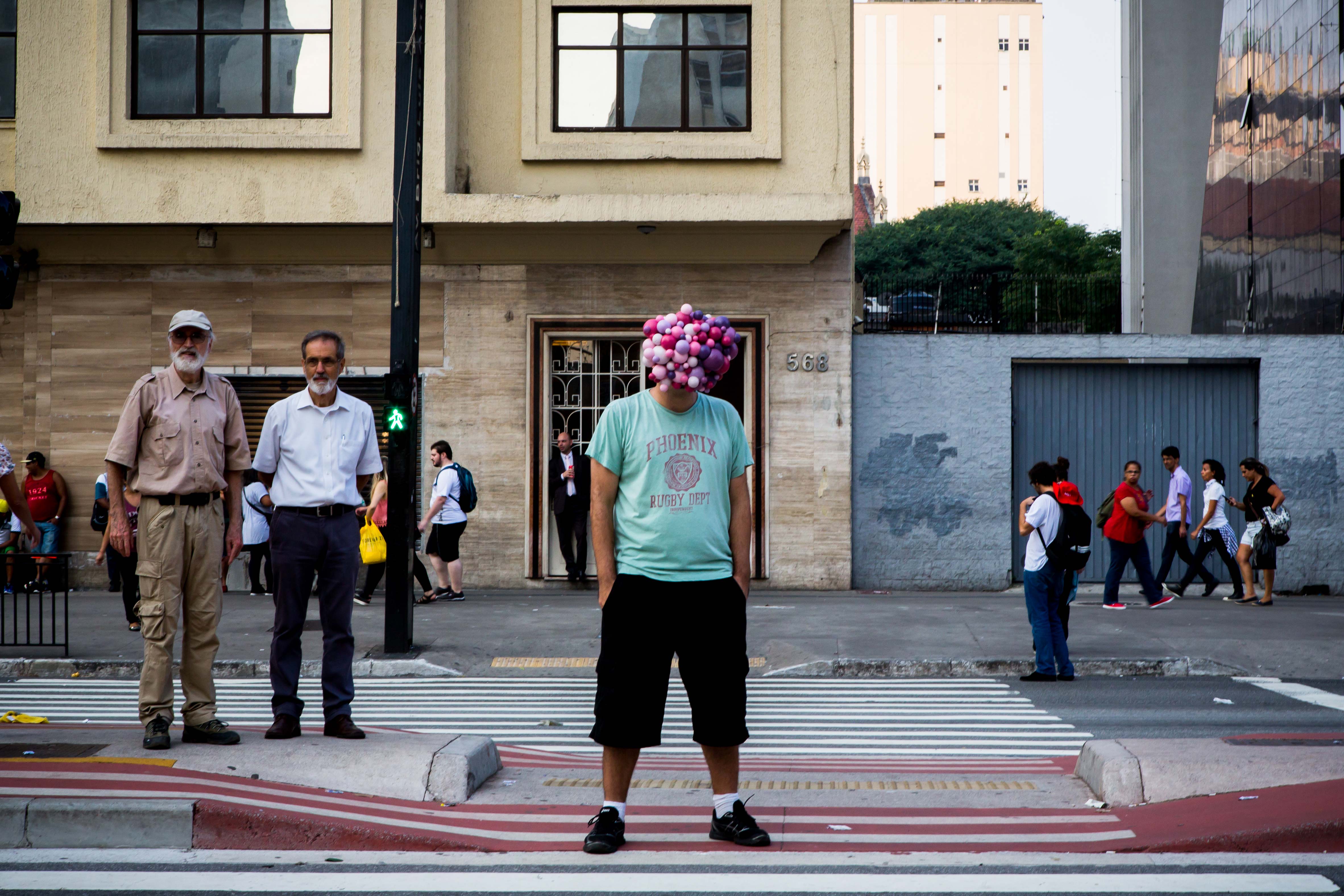 Dividing Lines goes on display at São Paulo’s SESI Gallery, 30 September – 15 November. It is the first chapter of the British Council’s AltCity programme, which continues at Mutek Festival, Mexico City in October 2016.

Linkedin
RELATED ARTICLES
OTHER ARTICLES
With the UK now set to run out of vaccines, people working in the sex industry – particularly outside of major cities – have been left especially vulnerable, reports Brit Dawson.
Photographer Anne-Marie Michel captures the women who through determination and strength are forging their own way in a male-dominated industry.
A series of photos by the late Jerry Dantzic taken in 1957 show a tender side to the iconic Jazz musician.
The government’s brutal crackdown on NGOs has left victims of rape without anywhere to seek help. And now, as the country plays a key role is Russia’s war, things are only getting worse.
Ahead of the release of his new album, the producer reflects on his battle with drug use, getting into painting and what Madonna taught him.
The author discusses her new memoir, which offers a sobering reflection on the racism and otherness she’s experienced along with a joyful celebration of her culinary heritage.