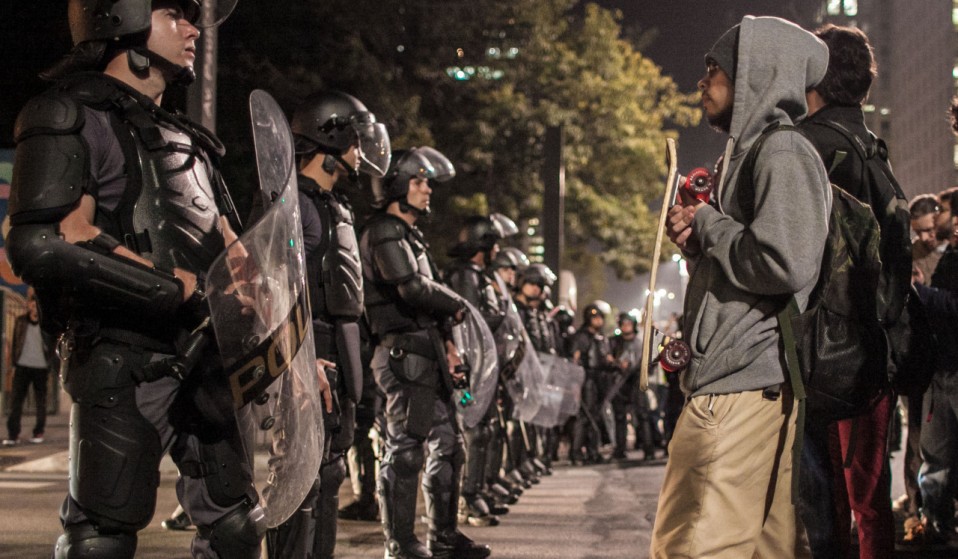 After a leaked wire tap unmasks the plot to topple President Rousseff, we look at the story so far and ask what’s next for Brazil.

After a leaked wire tap unmasks the plot to topple President Rousseff, we look at the story so far and ask what’s next for Brazil.

Most international media have so far refrained from calling President Dilma Rousseff’s impeachment a “coup”. They have however openly criticised her removal as anti-democratic and highlighted the new administration lead by Michel Temer as unpopular and embroiled in corruption. But now a leaked wire tap seems to support what Rousseff and her allies have been saying from the beginning: this was a coup, orchestrated by a right-wing elite threatened by Brazil’s largest anti-corruption investigation.

Have you managed to follow every twist in Brazil’s dramatic political circus? We’ve been struggling to keep up too. To bring you up to speed and give a sense of what’s to come, here’s everything you need to know about the battle lines being drawn in post-coup Brazil. 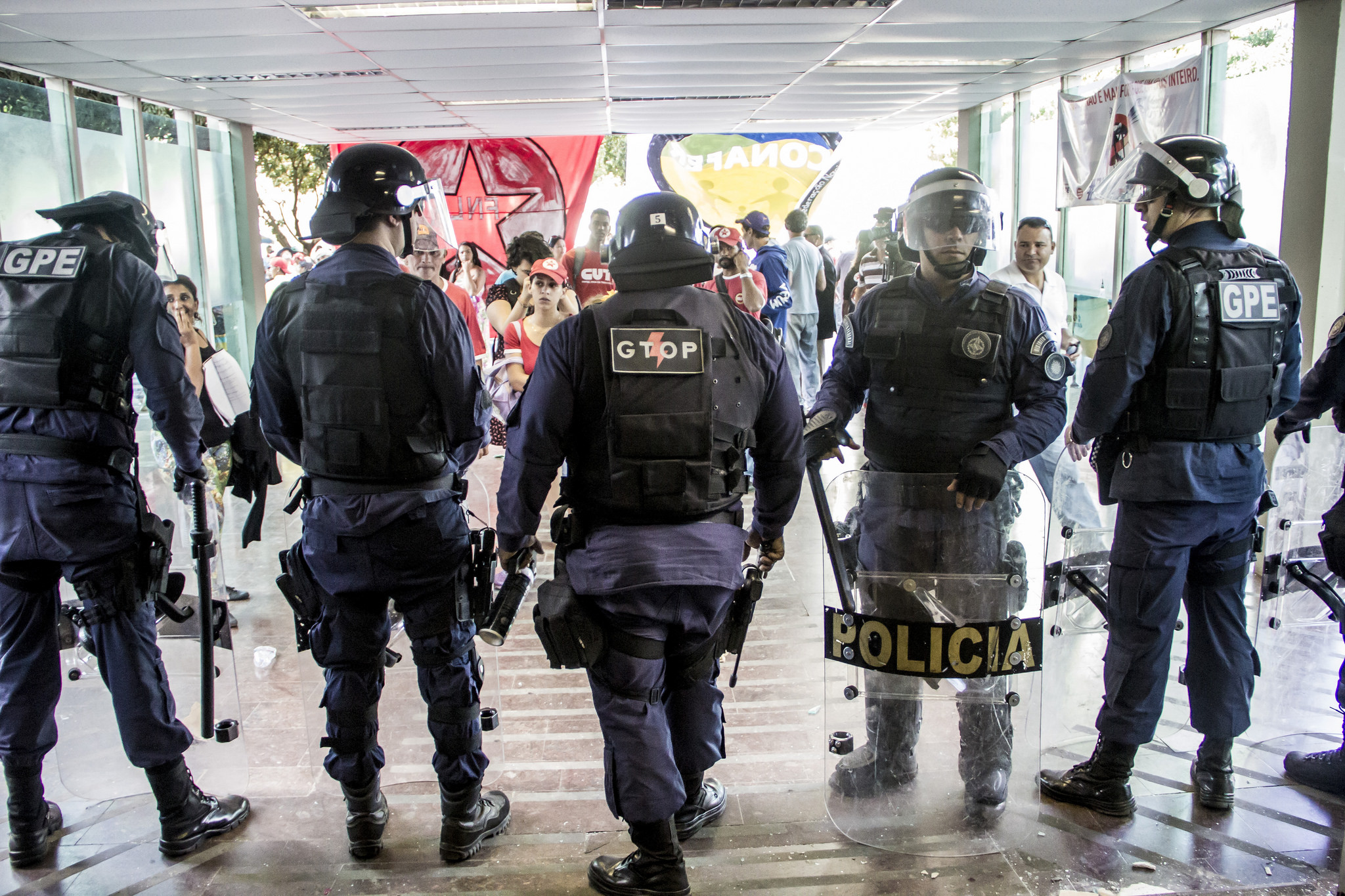 A taped conversation was released on Monday between Romero Jucá – the newly installed planning minister and powerful figure within Temer’s Brazilian Democratic Movement party (PMDB) – and Sérgio Machado, a former senator who until recently was the president of another state oil company, Transpetro.

They discuss how they have both been targeted by prosecutors in the Lava Jato (Car Wash) inquiry, which is investigating high-level corruption at the state oil giant Petrobras and has implicated politicians of all stripes. Recorded just weeks before Congress voted to impeach Dilma, Jucá explains the way out of the crosshairs is political: “We have to stop this shit,” he says, referring to Lava Jato. “We have to change the government to be able to stop this bleeding.” Machado agrees: “The easiest solution would be to put in Michel [Temer].”

Temer took power after the senate voted to advance impeachment proceedings against Rousseff, who is suspended for up to six months while allegations she manipulated government accounts before the 2014 election are considered. But after less than two weeks in the job, Temer’s all-white, male cabinet has faced strong criticism for not representing multicultural Brazil and huge resistance to its unelectable neoliberal policy programme.

The latest revelations will only add weight to growing calls that Temer’s administration is illegitimate. In fact, 62 percent of Brazilians want new elections. But elections are what the Brazilian elite fear most, because after facing nearly two decades of consistent electoral defeats, they’re (rightly) convinced their candidate will lose.

Although the new government can’t count on the votes of a majority of Brazilians, they know they’re supported by a corporate media and – as the leaked tapes show – the military, so it looks like they’ll be digging in for a fight. With social movements and young people leading the resistance to this neoliberal power grab, the battle is just beginning. 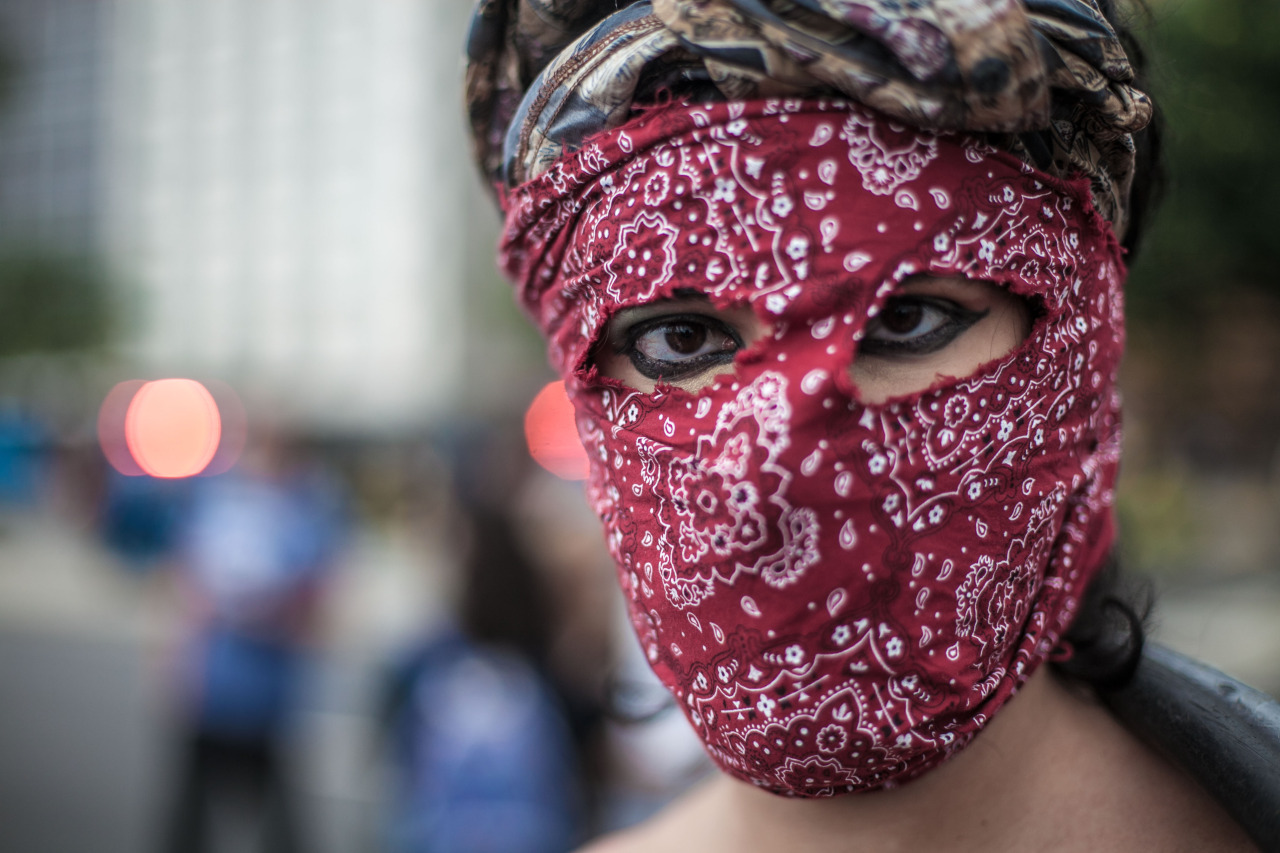 Wake up: yes! A lower house made up of corrupt senators voting to remove Dilma, one of the few political figures not to have been charged with any crimes, on the pretext of corruption always looked fishy. But the newly released recording conformed what many had long suspected: right-wing politicians cooperated with the country’s most powerful institutions, including the military and supreme court justices, to remove an elected president who threatened their elite interests and political careers.

Wait, it’s not about corruption?

No, it is all about corruption. But rather than senators leading a courageous battle against corruption – as they claimed – they were in fact removing Dilma to shelter themselves from the ongoing Lava Jato anti-corruption investigation.

Dilma’s Workers Party is knee-deep in the corruption allegations linked to Petrobras, but Dilma herself strengthened the judiciary’s independence and its investigative capabilities, while providing political protection for the ongoing investigation. There have been more corruption prosecutions under her leadership than any previous president.

Ironically, Dilma is one of the few victims of the anti-corruption drive after corrupt senators booted her out to save their own skins. Temer’s newly installed government includes seven ministers directly implicated by Lava Jato.

Glenn Greenwald breaks it down:
“(1) the core purpose of Dilma’s impeachment is not to stop corruption or punish lawbreaking, but rather the exact opposite: to protect the actual thieves by empowering them with Dilma’s exit, thus enabling them to kill the Car Wash investigation; and (2) the impeachment advocates (led by the country’s oligarchical media) have zero interest in clean government, but only in seizing power that they could never obtain democratically, in order to impose a right-wing, oligarch-serving agenda that the Brazilian population would never accept.” 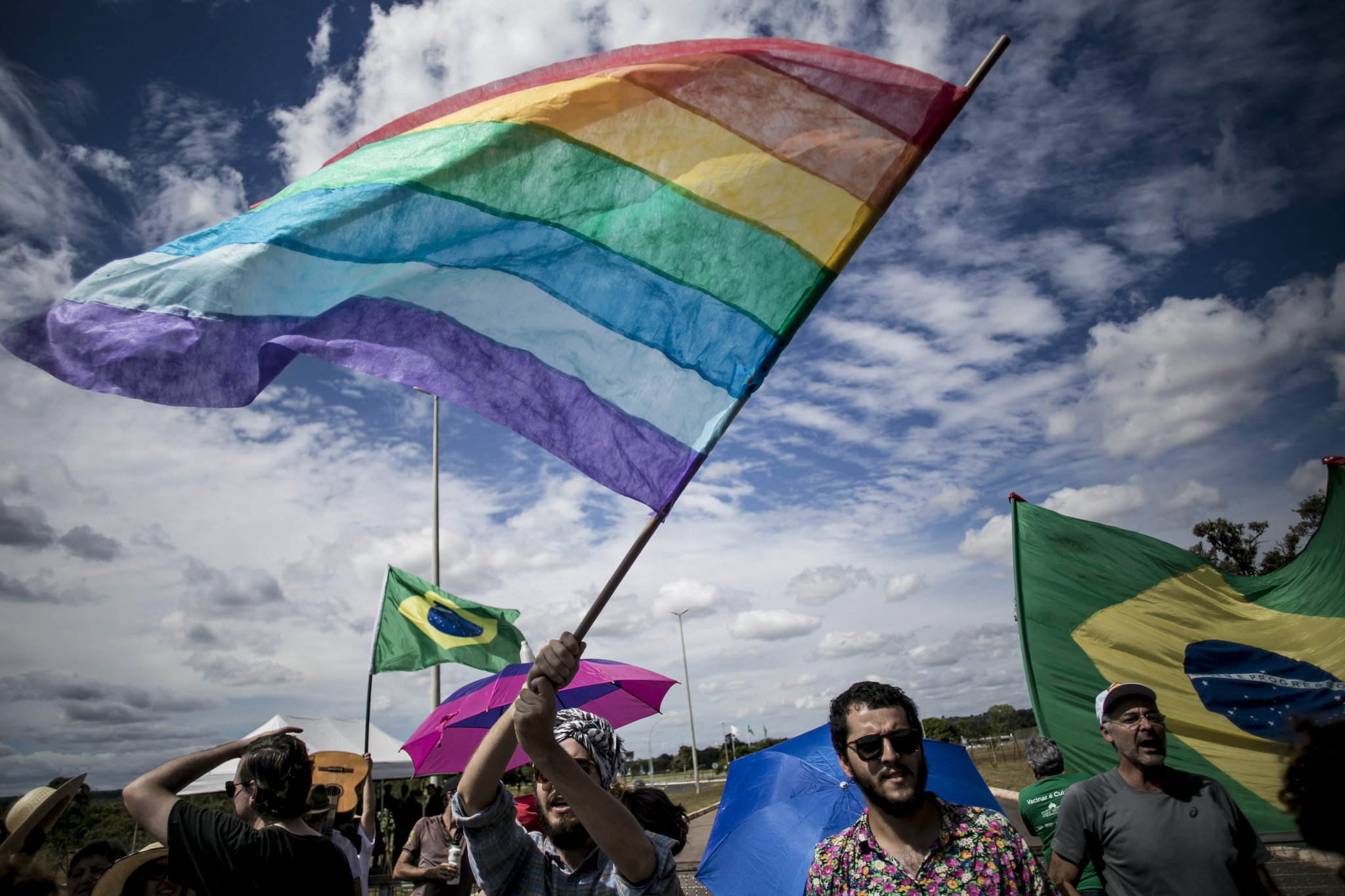 What’s so terrible about the new government?

On top of being even less representative of Brazil than the military coup government (they’re all white, rich and male), they’re attempting to deal with Brazil’s current economic crisis with a package of neoliberal measures that have consistently been rejected by the electorate since the early 2000’s.

What that means for ordinary people, especially the young, black and poor, is a bonfire of the rights they’ve achieved since the Worker’s Party took power in 2003 and lifted 40 million people out of poverty. Temer’s government are reading from the standard austerity playbook, with proposals to end free university education, cut healthcare, support for housing, rights for workers, and so on. 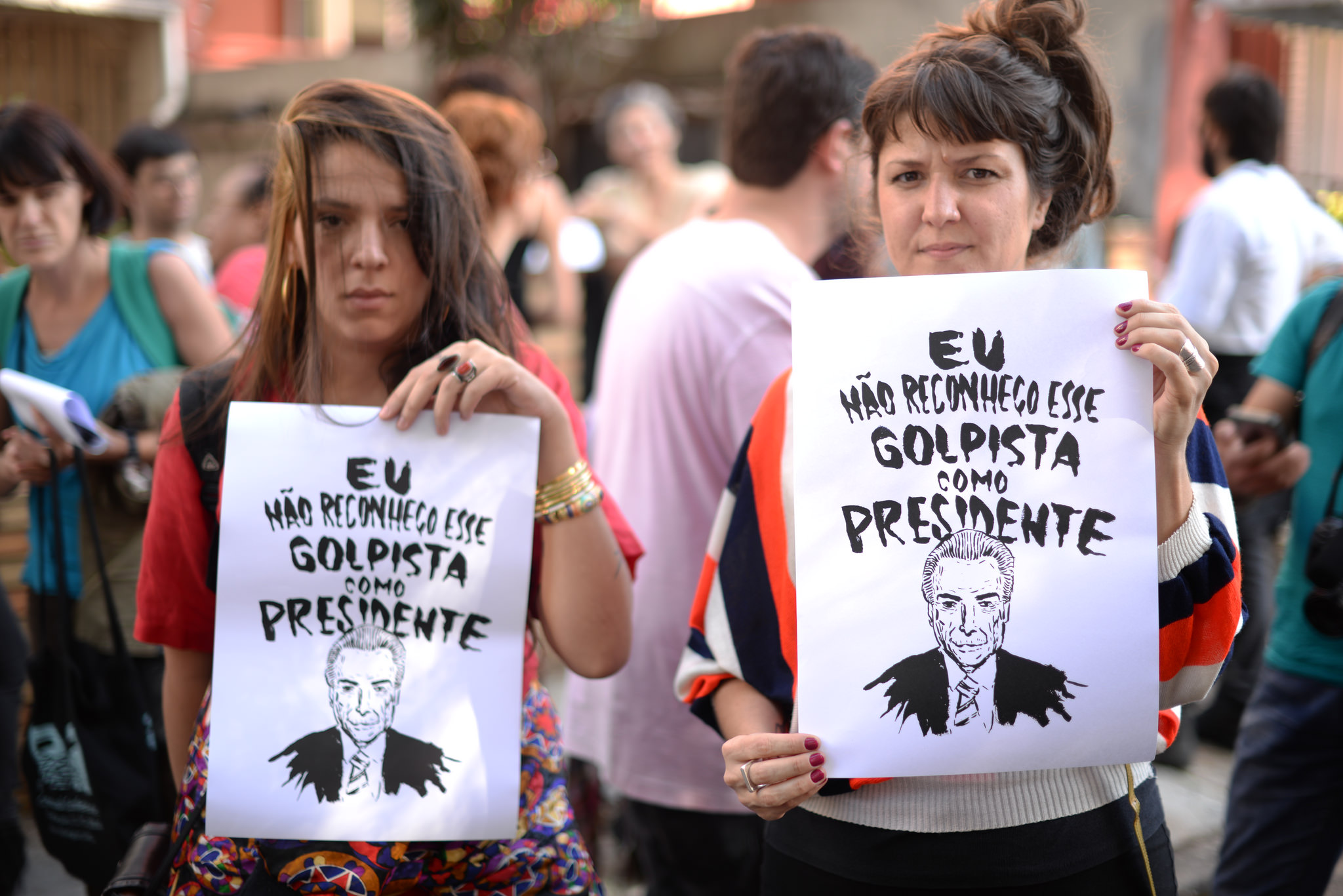 What’s the response from the streets?

There have been demonstrations across the country and on Sunday thousands of protestors marched on Temer’s house in São Paulo before being water-cannoned by police. Protests by artists, including actors at Cannes film festival, succeeded in reversing the government’s decision to abolish the Ministry of Culture. Social movements, such as the Landless Workers Movement (MST), have committed to fighting Dilma’s impeachment in the Senate. Together they’ve built new umbrella organisations, such as Frente Brasil Popular (Brazil Popular Front), to fight the new government and resist the neoliberal project more broadly.

While the short term prospects for success look bleak, Brazilian activists and social movements freed from divisions over loyalty for or opposition to Dilma’s Workers Party (PT) are thinking long-term about the changes Brazil really needs. Almost two decades of PT governance reduced Brazil’s remarkable levels of inequality and elite dominance over everything from land ownership to the economy and culture. These changes helped create a new Brazilian middle class and a new generation who are no longer prepared to allow the elite’s stronghold over the country threaten their life chances.

This is new generation of young activists who came of age during the anti-corruption and anti-systemic protests that began during the 2013 Confederations Cup. These young people were unmoved by PT’s model of co-existence with elite interests and are determined to forge a new settlement that works for the new Brazilians, providing a more radical solution to Brazil’s deep-rooted inequality. “We’re witnessing the opening of a new historical cycle for left in Brazil,” Igor Felipe, an MST activist explains. “We’re building a stronger base and new social conditions to transform society.”

Linkedin
RELATED ARTICLES
OTHER ARTICLES
With the UK now set to run out of vaccines, people working in the sex industry – particularly outside of major cities – have been left especially vulnerable, reports Brit Dawson.
With the virus now a global health emergency, we must take steps to fight misinformation and demand a swift UK-wide vaccine roll out, writes Phil Samba.
After rewriting the indie rulebook with her devastating songs about romantic longing, the singer-songwriter is now imagining a future in which the artist is no longer a product.
Following the release of his latest album, the rapper talks about finding a new approach to songwriting, attitudes to poverty, and why his music is more than a political statement.
Photographer Anne-Marie Michel captures the women who through determination and strength are forging their own way in a male-dominated industry.
A new series of photos by Johny Pitts shines a light on communities and subcultures that have all too often been overlooked.