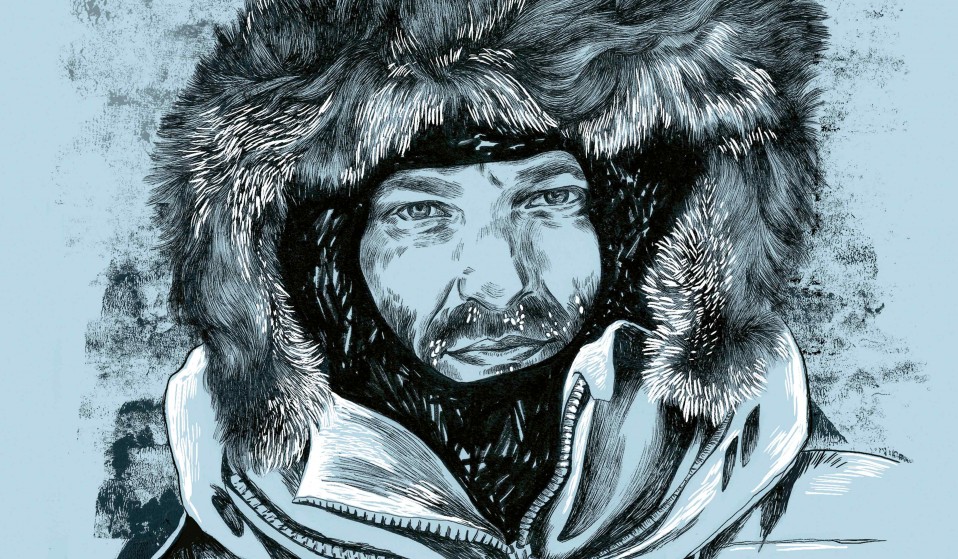 In 2013 Ben Saunders and Tarka L’Herpiniere became the first humans to walk 2,900 kilometres from the shore of the Antarctic to the South Pole and back again. But perhaps the greatest lesson, as Saunders explains here, was learned on their return home.

In 2013 Ben Saunders and Tarka L’Herpiniere became the first humans to walk 2,900 kilometres from the shore of the Antarctic to the South Pole and back again. But perhaps the greatest lesson, as Saunders explains here, was learned on their return home.

“A hundred years after Captain Scott and his men perished in their tent of hypothermia and starvation, cut off and alone in Antarctica – the journey he died trying to complete attempting remained unfinished. The same journey had defeated Sir Ernest Shackleton three years before Scott’s death, in 1909. Shackleton came within 97 miles of the Pole on his Nimrod expedition, before turning for home. Scott’s Terra Nova expedition arrived at the Pole in January 1912 only to find they’d been beaten to it by a Norwegian team led by Roald Amundsen, which had travelled at high speed on dog sleds. All five of Scott’s team died on their return journey. Their unfinished trek remained the high watermark of human endurance and endeavour in the toughest climate on earth. No contemporary expedition could come close. It was as if the marathon record had somehow remained unbroken since 1912. Finishing it became a calling that marked my life forever.

In the entire span of human history only nine people had attempted the journey from the shore of the continent of Antarctica to the South Pole and back. None had completed it. Five had died trying. The scale and severity of the challenge that lay ahead was something that underpinned years of obsessive planning and preparation for me and my teammate Tarka l’Herpiniere. In many instances our lives would be dependent on the reliability of our equipment. We carried nothing extraneous to simple survival. In many cases our lives hinged on seemingly basic items: the zip of a tent; the rubber seal of a vacuum flask; the simple plastic pump that powered our stove. What’s more our chances of success were intrinsically linked to the weight of our sleds. I became obsessed with making them lighter. We removed the labels from clothes. We cut the metal pullers from zips and replaced them with Kevlar cord loops. We sourced carbon fibre skis and poles and titanium spoons. We sawed the handles off our toothbrushes.

Tarka and I had set out to complete Scott’s journey for the first time by dragging our leaden sledges in the footsteps he and his team had made for 900 miles. This trail began at the wooden hut that still stands on the shore of Ross Island, to the South Pole. Once we reached the Pole, we would then haul them 900 miles back again. I had, perhaps naively, expected that spending more than a hundred days living on and travelling over this vast, white swathe of near-nothingness might be conducive to the development of some form of expanded consciousness. I had anticipated that the lack of scenery, the lack of anything living at all, might have the same effect as the lack of chatter on a silent retreat. I thought that I might return home with some new-found Zen-like state of being. The reality was rather less idyllic. For 105 days the terrain became a giant white crucible. It was a place where we suffered. It was a place where we were tested and challenged in ways and degrees that I had never imagined possible. The scale of the journey we were trying to complete, which represented nearly 70 consecutive marathons, was at times overwhelming. To this day it is difficult to fathom, or to conceive. Antarctica is twice the size of Australia. It is the same size as China and India put together. It’s almost impossible for us, raised for thousands of years with completely different scales of comprehension, to understand the sorts of distances and conditions of this place at the end of the world.

We rarely felt at one with Antarctica. We fought tooth and nail for every foot of every mile that we covered. Our relationship with nature – with the wind, the temperatures and with the snow – was largely adversarial. At times Antarctica stunned us with moments of beauty and majesty that defy description. And at times it felt malevolent. It felt as if we weren’t supposed to be there, and that the place, the environment, was trying to kill us. It was more than able to do this at any moment, perhaps by snatching away our tent in a storm, or by gradually snuffing out our precious body heat, day by day. At times we were conscious that we were these tiny little specks of heat in a vast, murderous expanse of deadly cold.

We completed our journey. We had succeeded in the endevour that had defeated Shackleton and claimed the lives of Captain Scott and his men, the longest human-powered polar expedition in history.

Before we set off I think I’d expected a slightly more decorous homecoming than the one we got. Perhaps we would be awarded an MBE or a Polar Medal, or an invitation or two to a breakfast TV sofa. Very little came. I spent most of 2014 recovering, hermit-like and cantankerous, before the realisation gradually dawned on me that the only two people who could ever genuinely appreciate what we had been through were Tarka and me. We had done something no one had ever done before, and been to places no one had ever been – literally as well as figuratively. It slowly occurred to me that waiting for some form of external validation was fruitless. It was impossible for anyone else to really get it. The scale of the feat, and the smallness of ourselves as humans, is too great a disjuncture. The two can never be reconciled.
The biggest lesson this giant challenge has taught me is that fulfilment and success and self-acceptance isn’t a finish line that you too might cross one day if you push (or indeed pull) hard enough. It’s a moment-to-moment decision. You won’t read much about mindfulness or presence or gratitude in Scott or Shackleton’s diaries. But now I’ve joined up the 1,795-mile broken loop of their ski tracks for the first time, I think they’d understand what I mean.”

Linkedin
RELATED ARTICLES
OTHER ARTICLES
The author discusses her new memoir, which offers a sobering reflection on the racism and otherness she’s experienced along with a joyful celebration of her culinary heritage.
To mark the premiere of his new documentary on surfing giant Gerry Lopez, the filmmaker and former pro skateboarder sits down to share his unique brand of wisdom.
From the chip shops, to the bingo parlors and burlesque dancers, photographer Mike Coles remembers capturing scenes of holidaymakers by the English coast.
A sharp increase in officers armed with the electrical weapon is resulting in serious injuries and deaths.
Last week, Tower Hamlets council removed its nudity-restricting licensing conditions in a huge win for London’s kink community.
Steel City is often overlooked when it comes to the country's cultural radar despite its role in shaping electronic music.